Over the course of art history, certain pieces have come to symbolize entire artistic genres. Leonardo's Mona Lisa and Michelangelo's David, for example, define the Italian Renaissance; The Scream by Edvard Munch epitomizes Expressionism; and Pointillism is typified by Georges Seurat's A Sunday Afternoon the the Island of La Grande Jatte.

Seurat completed this monumental masterpiece in the 1880s. In order to craft the larger-than-life scene, the artist meticulously applied millions of hand-painted dots to the canvas. Seurat pioneered this technique when painting A Sunday Afternoon the the Island of La Grande Jatte, sparking the start of the Pointillist movement.

Introduced by Georges Seurat and fellow French artist Paul Signac in 1886, Pointillism is a painting technique in which small, discrete dots work together to create a cohesive composition. Although this aesthetic approach was largely inspired by the dappled brushstrokes of Impressionism, the genre is in fact a branch of Post-Impressionism, a major movement that emerged in the 1890s.

While the styles explored by Post-Impressionist artists are diverse, most featured flatness, formality, and exaggerated color in their work—characteristics that are evident in A Sunday Afternoon on the Island of La Grande Jatte.

A Sunday Afternoon on the Island of La Grande Jatte

Georges Seurat began painting A Sunday Afternoon on the Island of La Grande Jatte in the spring of 1884. During this time, the artist lived and worked alongside the Impressionists in Paris. Like these artists, Seurat often painted scenery found just outside of the French capital, including La Grande Jatte, a Seine River island situated to the west of Paris.

In order to perfect his painting of the popular park, Seurat completed a collection of preliminary sketches and drawings. Taking a cue from the Impressionists, he created these studies away from his studio and en plein air. This approach enabled Seurat to capture the color, light, and movement of the scene before him, which he revisited several times before finishing the final large-scale painting in 1886.

Why did he dedicate so much time to these preparatory sketches? As Pointillists, Seurat and Signac were particularly interested in playing with perception and experiment with optics, resulting in a comprehensive and meticulous painting process.

“Confronting his subject,” Signac explained, “Seurat, before touching his little panel with paint, scrutinizes, compares, looks with half shut eyes at the play of light and shadow, observes contrasts, isolates reflections, plays for a long time with the cover of the box which serves as his palette, then . . . he slices from his little heap of colors arranged in the order of the spectrum the various colored elements which form the tint destined best to convey the mystery he has glimpsed. Execution follows on observation, stroke by stroke the panel is covered.”

Georges Seurat, “A Sunday Afternoon on the Island of La Grande Jatte,” 1884-1886 (Photo: The Art Institute of Chicago Public Domain)

A Sunday Afternoon on the Island of La Grande Jatte depicts a typical outing for Parisians living in the 1880s. Facing the shimmering river and relying on umbrellas and trees for shade, they appear to enjoy a brief escape from city life, whether they're lounging on the grass, fishing in the river, or even admiring the ambiance in the company of a pet monkey.

Though the subjects of A Sunday Afternoon on the Island of La Grande Jatte are rendered in an unrealistic and almost minimalist style, Seurat opted to place them in a range of positions (“of some we see the backs, some we see full-face, some in profile, some are seated at right angles, some are stretched out horizontally, some are standing up straight,” art critic Félix Fénéon remarked in 1886). This decision adds a sense of realism to the otherwise stylized depiction and helps draws the viewer into the receding scenery.

Another optical trick evident in this painting is Seurat's inclusion of an innovative painted “frame.” According to the Art Institute of Chicago, this Pointillist border is supposed to “make the experience of the painting even more intense” by adding even more colors, tones, and a textures to the composition.

After completing the painting in 1886, Seurat opted to exhibit it in the eighth and final Impressionist exhibition. While it was met with mixed reviews, it remained the artist's most well-known work of art until (and after) his untimely death in 1891. 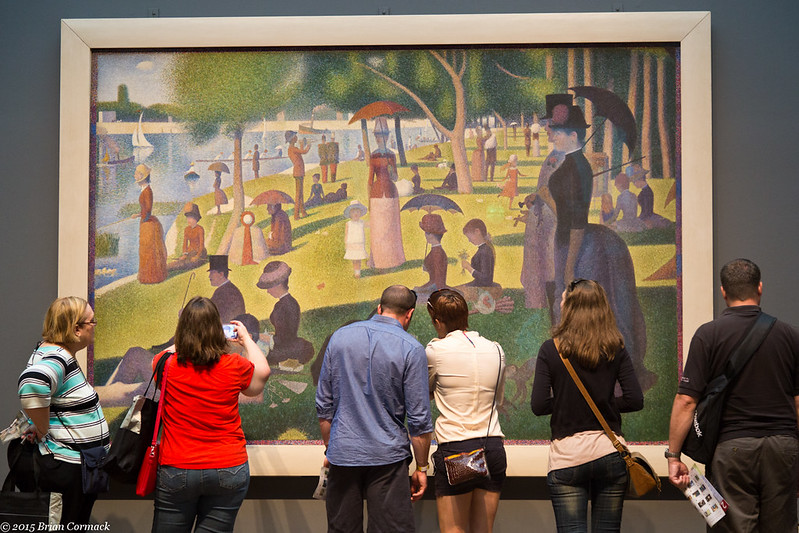 Until the turn of the century, A Sunday Afternoon on the Island of La Grande Jatte remained in the possession of the Seurat family. It was then passed around different dealers until 1925, when it found a permanent home at the Art Institute of Chicago. Today, it remains a highlight of the museum's collection and, arguably, the most celebrated work of Pointillism in the world.