Today, Impressionism remains one of the most popular and prevalent types of painting. Considered the catalyst of modern art, the Impressionist genre has played a pivotal role in art history, with its influence evident in a range of artistic practices.

Having left such an important legacy, you may be wondering what could have set such a monumental movement in motion. Unlike most genres, which develop over time, Impressionism is believed to have to started in the 1870s with a single work: Impression, Sunrise, a light and airy landscape painting by none other than Claude Monet.

Often referred to as the “Father of Impressionism,” Monet was one of the movement's most prominent members. While the French painter was already an established artist by the time he completed Impression, Sunrise—and subsequently sparked a major art movement—his earlier work exhibits many of the characteristics that would later come to define Impressionism. With this in mind, it is no surprise that he would be the one to officially initiate the Impressionist Movement.

In 1840, Claude Monet was born in Paris, France. When he was five years old, his family relocated to Le Havre, a seaside town in Normandy. Here, Monet developed his interest in art, which was fostered by his enrollment in an art school in 1851. Even as an adolescent, Monet's work was popular; locals would regularly purchase his prized charcoal studies.

In 1856, under the mentorship of fellow future Impressionist Eugène Boudin, Monet began dabbling in oil paints and painting en plein air, or outdoors—two habits that he would maintain for the rest of his life. “I have never had [a studio]” Monet confided, ” and personally I do not understand why anybody would want to shut themselves up in some room. Maybe for drawing, sure; but not for painting.”

In 1861, Monet was drafted to Algeria for military service. During his seven years in North Africa, he developed a taste for color and light. When he returned to France, he continued to incorporate a sun-soaked palette into his paintings, which he rendered in quick, expressive brushstrokes in order to capture fleeting “impressions” of his surroundings.

The Port of Le Havre and Impression: Sunrise

In 1872, Monet visited Le Havre. During this holiday, he completed a series of six paintings featuring the Port of Le Havre at various times: daytime, sunset, nighttime, and, of course, dawn.

Impression, Sunrise takes Monet's interest in light, color, and spontaneity to new heights. As with his other works in the series, the artist opted to focus on the sunlight's ephemeral effects on the water. While the hazy silhouettes of rowboats, ships, and smokestacks are evident in the composition, the emphasis is mostly on the breaking sunlight and its undulating reflections.

Why has Impression: Sunrise resonated more strongly than other works in this six-piece series? Ironically, the painting's fame is predominantly due to its initial unpopularity.

The First Exhibition of the Impressionists

Two years after completing the painting, Monet exhibited Impression, Sunrise in the first Exhibition of the Impressionists, an independent show hosted by Paris' avant-garde artists. Set in the studio of Nadar, a French photographer, the exhibition featured over 200 pieces by the Société Anonyme Coopérative des Artistes Peintres, Sculpteurs, Graveurs, a band of artists including Pierre-Auguste Renoir, Edgar Degas, Camille Pissarro, and others. While these painters exhibited equally controversial work, critics were particularly bemused by Monet's painting—especially its title.

“They are impressionists in that they do not render a landscape, but the sensation produced by the landscape,” Jules Castagnary of Le Siècle, wrote. “The word itself has passed into their language: in the catalogue the Sunrise by Monet is called not landscape, but impression. Thus they take leave of reality and enter the realms of idealism.”

“Dirty three-quarters of a canvas with black and white, rub the rest with yellow, dot it with red and blue blobs at random, and you will have an impression of spring before which the initiates will swoon in ecstasy,” Emile Cardon of La Presse quipped.

Louis Leroy, a critic for the satirical newspaper, Le Charivari, wrote: “Impression—I knew it. I was just saying to myself, ‘if I'm impressed, there must be an impression in there’… And what freedom, what ease in the brushwork! Wallpaper in its embryonic state is more labored than this seascape!”

While intended to mock the new movement, these critics—especially Leroy, whose words have become particularly infamous—helped propel the movement; following their reviews, the Société Anonyme Coopérative des Artistes Peintres, Sculpteurs, Graveurs rebranded as the Impressionists.

The Influence and Legacy of Impression, Sunrise 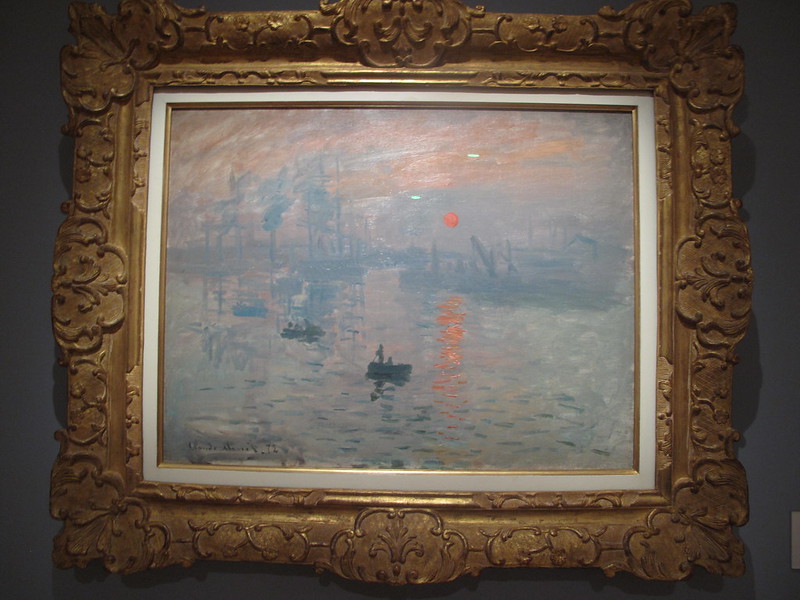 Following this name change, the Impressionist movement saw a surge in popularity, with Monet at the forefront. The artist continued to capture “impressions” of his surroundings for the remainder of his life. In 1890 and 1891, he completed a series that explored the effects of light, atmosphere, and seasonal changes on Haystacks; the following few years, he applied the same treatment to a Gothic façade in his Rouen Cathedral series; and, for his most ambitious project, Monet spent 30 years creating 250 large-scale paintings of Water Lilies.

While series such as these now define Monet's oeuvre, one cannot underestimate the role of Impression, Sunrise—especially in the context of the artist's own words and wishes.

“A landscape is only an impression, instantaneous, hence the label they’ve given us—all because of me, for that matter,” Monet recalled. “I’d submitted something done out of my window at Le Havre, sunlight in the mist with a few masts in the foreground jutting up from the ships below. They wanted a title for the catalog; it couldn’t really pass as a view of Le Havre, so I answered: ‘Put down Impression.' Out of that they got impressionism, and the jokes proliferated . . . “