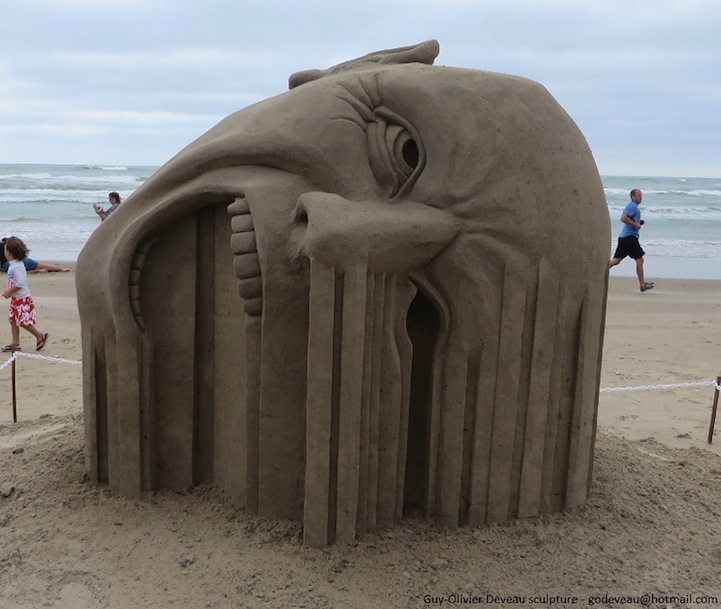 Bleeding is an incredibly eye-catching sand sculpture by Qubec City-based artist Guy-Olivier Deveau that features a resting head boasting undeniably surreal elements. Rather than depicting a calming, serene scene of a giant, slumbering head, the piece focuses on an open-mouthed man's head, seemingly screaming, lying on its side with one half of his face eerily distorted.

The piece is all at once surreal and realistic, striking and dramatic, scary and intriguing. It's hard to believe that the sculpture is actually made of sand and that Deveau has managed to construct the piece with such detail, given his medium. The figure's expression is meticulously crafted, making for a truly unusual sight on a beach in South Padre Island, Texas.

Even though Bleeding was one of many sculptures on South Padre Island just recently for Sandcastle Days 2013, a sand sculpting competition that Deveau wound up placing third in, it managed to stand out. We were lucky enough to get in contact with the creative sculptor behind this amazing piece and ask him a few questions. Be sure to read that interview, below. 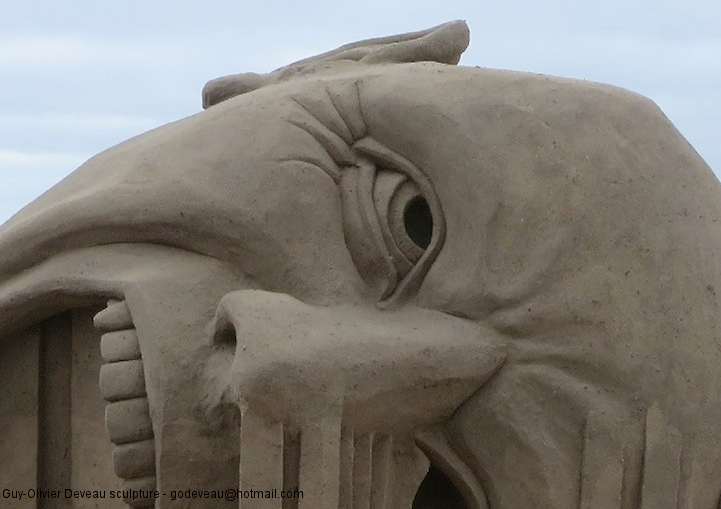 How did you get started in sand sculpting?
Sand sculpting started as a summer job in Qubec City meant to finance my study in the field of philosophy. As I was working toward my master's degree, I spent more and more time during the year sculpting sand and eventually ice. I entered the world championship in 2008 and placed 4th, which sent me on the path I am on today. I've been sculpting sand and ice in many countries around the world, such as Japan, Denmark, France, Portugal, Holland, Kuwait, Colombia…

How do you choose your subjects?
Images comes to my brain and I make them. I don't have a clear method for finding idea. Sometime, I find something the day before I start carving, other times, like in the case of the piece Bleeding, it lingers in my head for a couple months before I have a clear vision of what it's going be. I usually like things that have a creepy or scary edge to it and I thought that the hollowed eye and wide opened mouth gave it that feel. 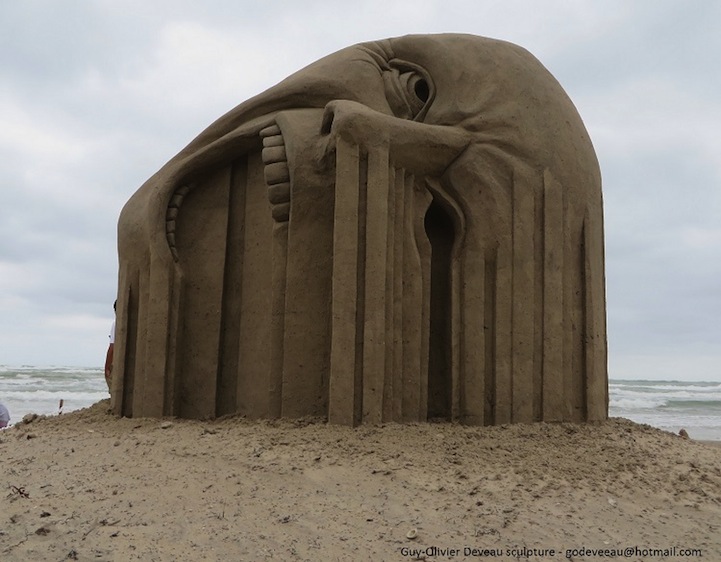 How long does it typically take you to complete a sand sculpture?
Competition sculptures are usually made in 3 days. That's the standard format for many North American contests. This particular contest, the “Sand Castle Day” in South Padre Island, TX, was a 21 hours event set on 3 days which included pound-up, the process of compacting sand in big wooden or plastic forms with a lot of water to create a relatively solid sand block. Most contests will have you do your own pound-up, on the clock or not.

I see that you also work with ice, snow, and wood. How does sand as a medium compare?
Sand is my favorite because of all the shadows, sharp edges and details that you can create with it. Ice and snow, in comparison, have to be a bit more rough, but usually carves faster. I usually use power tools to carves those material. Add the cold temperature factor and it makes them much more physical to carve. Wood is what I'm the least experienced with and I do it more as a hobby than a living. It is definitely the slowest to carve compared to the other ephemeral mediums. 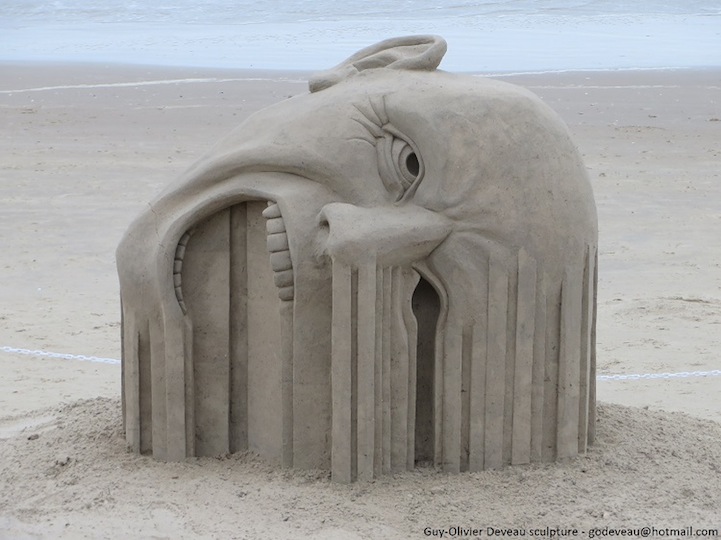