In the digital age, we’re used to pointing and shooting photos with our smartphones and getting instant results. However, these photos are easily lost among the thousands of other images in our phones’ camera rolls. The concept of “instant photography” began long before smartphones were invented, and it allowed photography lovers to hold a captured moment in the palm of their hands.

Instant film was first introduced during the late 1940s, and it was so revolutionary that it transformed the photographic medium in ways that can still be seen today. Even if you haven’t adopted an analog process for creating photos, many of us enjoy applying filters to make our digital images look grainy, and as though they have vignettes or light leaks. In fact, there are even some apps that allow you to include a fake, Polaroid-style frame around your photo. Despite the easily-accessible aesthetic, it’s still important to understand how Polaroid photography was born.

History of the Polaroid Corporation

The Polaroid Corporation was founded by American scientist Edwin H. Land in 1937, but it wasn’t known as a leader of instant photography then (as it is today). Polaroid used polarizer technology (an optical filter) to create all sorts of zany products, including 3-D movies and glare-reducing goggles for dogs. During World War II, the innovative company designed and manufactured many products for the armed services, including an infrared night viewing device and colored filters for rangefinders and periscopes, which is an object that lets you look around walls, corners, or other obstacles.

The Birth of Polaroid Photography

While on vacation with his family in 1944, Land’s three-year-old daughter asked him why she couldn’t see the picture he had just taken of her on his camera. Within the same day, the prolific inventor claimed he came up with the camera design, the film, and chemistry that could accomplish his daughter’s wish. It was another three years until he finally realized his vision and presented instant camera film to the public for the first time.

Land’s invention was a huge milestone in the history of photography, as it transformed the timely traditional process of the medium into something that took just a matter of minutes. In 1948, the Polaroid Land Model 95 camera was born, bringing this exciting technology to the hands of the consumer. The original model had two separate positive and negative rolls, which enabled the image to be developed inside the camera. Polaroid manufactured just 60 copies of the Land Camera at first, but the company seriously underestimated the demand—all of the units and film sold out in one day. 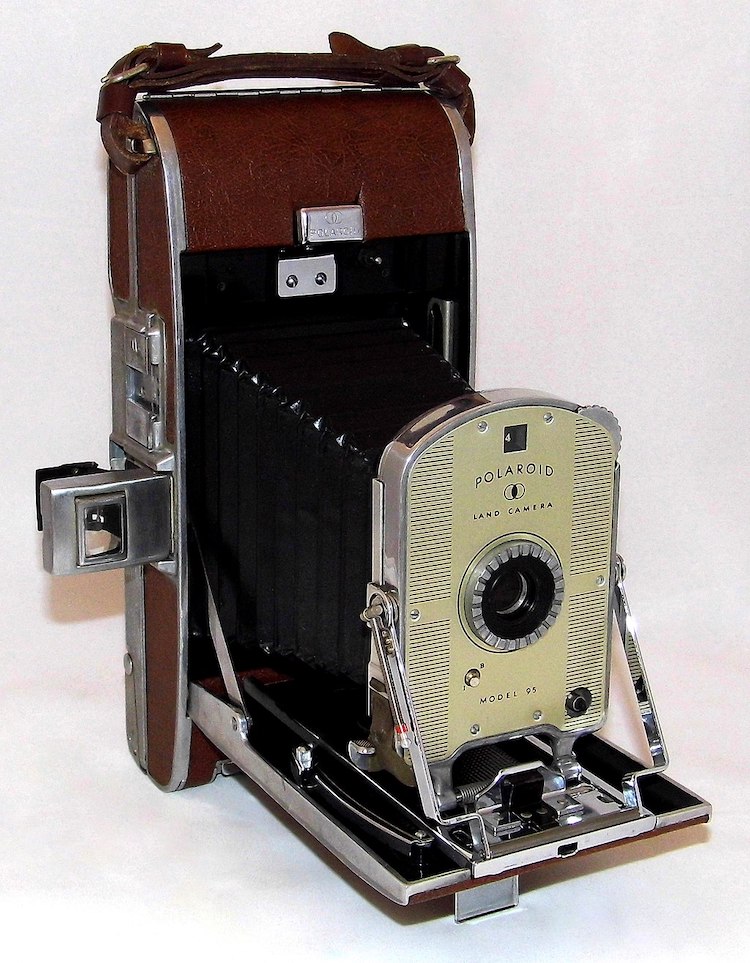 In the late 1960s, Polaroid recruited the world’s best-known artists—Ansel Adams, David Hockney, and Andy Warhol—to test its products. It provided them with free film and studio space and invited them to snap photos of whatever they wanted, as long as they returned the finished prints to the Collections Committee. The idea was also brought to Europe, where cameras and film were given to leading photographers such as David Bailey, Sarah Moon, and Helmut Newton. These works became the basis for the International Polaroid Collection. Through the 1970s and 1980s, the collection grew as more and more artists applied for camera and film grants. The epic collection was later displayed as The Polaroid Project in 2018 at Museum für Kunst und Gewerbe Hamburg in Hamburg, Germany.

Despite Polaroid's popularity in the second half of the 20th century, the company filed for federal bankruptcy protection in 2001. The art of instant photography looked like it had expired; and, in 2008, the company officially announced that they would be ceasing production of their analog film products. Fujifilm took over the market, and many Polaroid fans were left dismayed.

However, the magic of instant photography was reborn thanks to a revival endeavor known as The Impossible Project. In 2008, a small group of instant photography fans saved the last remaining Polaroid factory in the world, located in the Netherlands. Resurrecting Polaroid’s instant film was easier said than done. The factory’s machines were broken, the chemical formulas were lost, and suppliers were out of business. But in time, the team made the impossible possible and released an exciting range of black & white and color film.

Polaroid brand director Ozlem Birkalan reveals, “Since then, we have been the only people making film for Polaroid cameras—both vintage Polaroid cameras and the new cameras we have designed.”

Polaroid now stands for capturing moments you can keep with you forever. “This rebrand is to make it clear to all fans, retailers, and partners that we are one brand,” Birkalan says, “with one name that represents the iconic company that people came to know and love over the past nine decades, whilst looking to the future.”

Find out more about Polaroid’s rebirth here, where you can also buy its latest cameras and film.