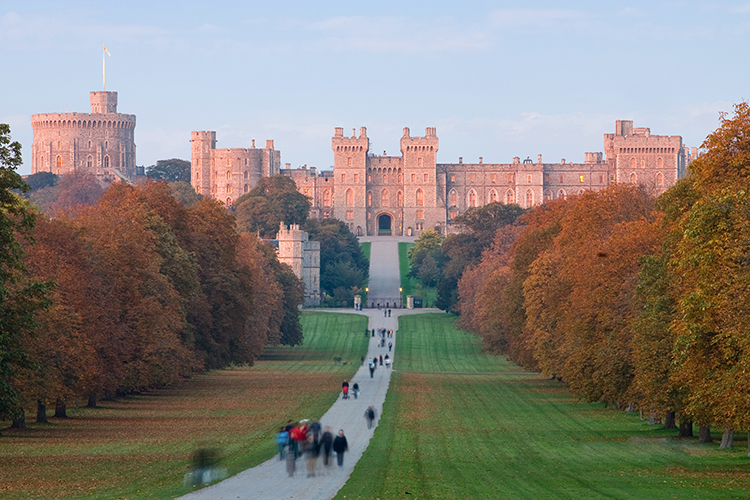 Nestled into a charming small town in the British countryside is Windsor Castle—the oldest continually occupied castle in the world. It is also the largest castle in which people still live and work. Thousands of tourists a day flock to visit the staterooms, chapels, and rolling grounds open to the public. Behind these public scenes, the castle contains extensive private grounds and royal apartments fit for a Queen. Her Majesty Queen Elizabeth II spends most of her weekends at the beloved castle and even quarantined there with her husband Prince Phillip.

Like any tourist attraction, there are gift shops, guide ropes, and countless guidebooks to read. Wandering Windsor, you can't take your eyes off the opulent gilding and imposing portraits. The magnificent castle, which has housed 39 British monarchs, has a history stretching back 900 years to the days of William the Conqueror, the first Norman King of England. Many centuries later, the British royal family changed their operative surname to “Windsor,” becoming known as the House of Windsor in 1917.

Why is Windsor Castle such an important piece of British history? Read on to discover the history of one of the world's most famous castles. 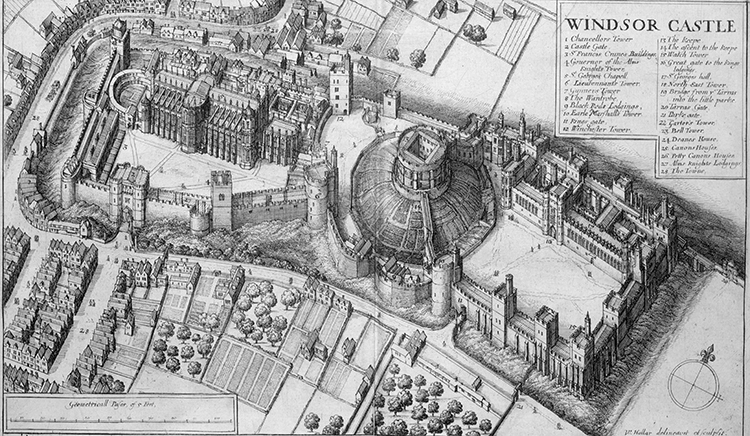 The Norman noble William the Conqueror swept into England in 1066, beginning a process of dominating and uniting the smaller kingdoms he encountered. William I, as he came to be known, was a military king. Like most medieval castles, Windsor Castle originated from a defensive need. The location of the present-day castle was chosen for its proximity to the Thames River and to guard the western approach to London. The military fortress was made of wood and constructed in the motte-and-bailey style. In this style, a strong keep (central building) stood upon a central raised mound, surrounded by a walled and barricaded courtyard. The castle also happened to border a forest rich in hunting—considered a kingly sport.

A defensive structure, the Norman kings did not reside at Windsor Castle until Henry I held a celebration there in 1110. By mid-century, the wooden structure was in poor shape, so Henry II began to transform the wooden building into one of solid stone. He began in the 1170s with the Round Tower, a structure which still stands (modified later) today on the sight of the early keep. The king also added other stone buildings surrounding the courtyards, including towers and gates. The castle was still of military use and suffered damages during the revolt of the English Barons against King John of Magna Carta (and Robin Hood) fame. 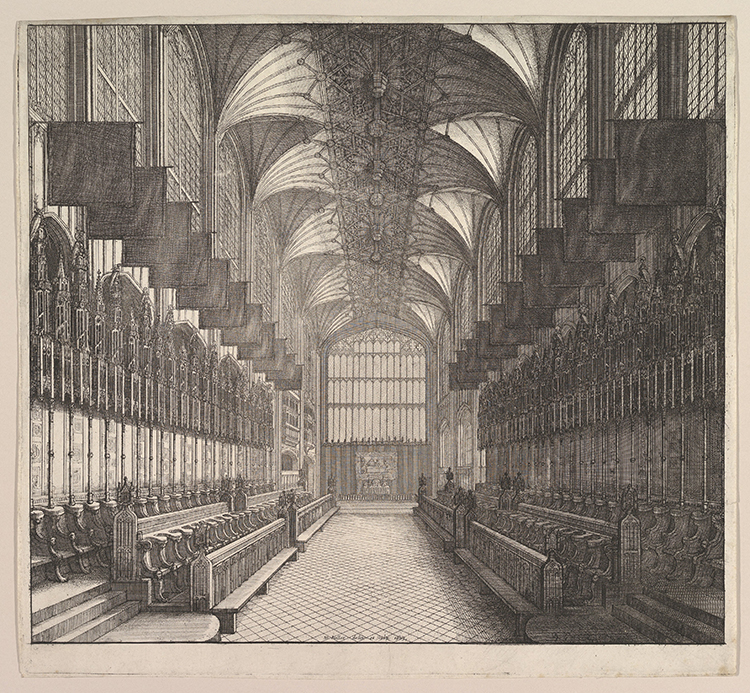 St. George's Chapel, etched in 1663 by Wenceslaus Hollar, published in Elias Ashmole's “The Order of the Garter,” 1672. [Photo: The Metropolitan Museum of Art [Public domain])

By the 13th century, the castle was an established royal residence. Successive kings incorporated their own touches; Henry III added a large tower known as the Curfew Tower, while Edward III added the enormous Norman Gate and the famous St. George's Hall. The latter is still used today for its original purpose: the Knights of the Order of the Garter, a chivalric order Edward III founded. A highlight of the hall is St. George's Chapel, which can be visited today and where worship is regularly held. Many royal couples such as Prince Harry and Meghan Markle—now the Duke and Duchess of Sussex—were married in the chapel. Visitors will also find the graves of ten British monarchs, including Henry VIII.

A Royal Palace Without a King 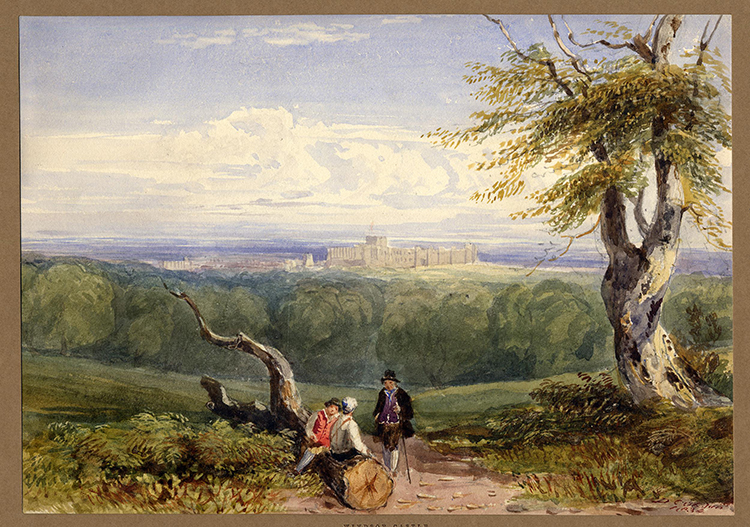 Watercolor with Windsor Castle in the distance by David Cox Junior, 1834. (Photo: © The Trustees of the British Museum [CC BY-NC-SA 4.0])

In the late medieval and early Renaissance period, English kings used Windsor Castle for sport and security. Many continued to repair, rebuild, and expand the castle. The Tudor King Henry VIII added a tennis court; his daughter Mary I used stone remnants of an abbey to add to the castle's Lower Ward. (This was rather ironic material given the queen briefly restored Catholicism in a short-lived effort to return England to the church after her father's break from Rome and subsequent dissolution, destruction, and sale of the monasteries.) During the reign of Elizabeth I, the castle became an important site for diplomatic relations.

By the mid-17th century, the authoritarian ambitions of the Stuart King Charles I lead to intense tensions—politically and religiously—between opposing factions. The Royalists (backing the king) and the Parliamentarians (or Roundheads, backing Parliament) met in battle in 1642 beginning the Civil War. The Parliamentary forces which held London also took control of Windsor Castle, valuable for its defensive position with regard to the capital. Soldiers looted valuables, while the army quartered prisoners in the castle. The king himself found himself a prisoner there. Charles I was the first and only British monarch to be put on trial by his subjects. He was convicted and executed, then buried in St. George's Chapel. For the first time, Britain was without a king, as the heir had been forced to flee to the continent. 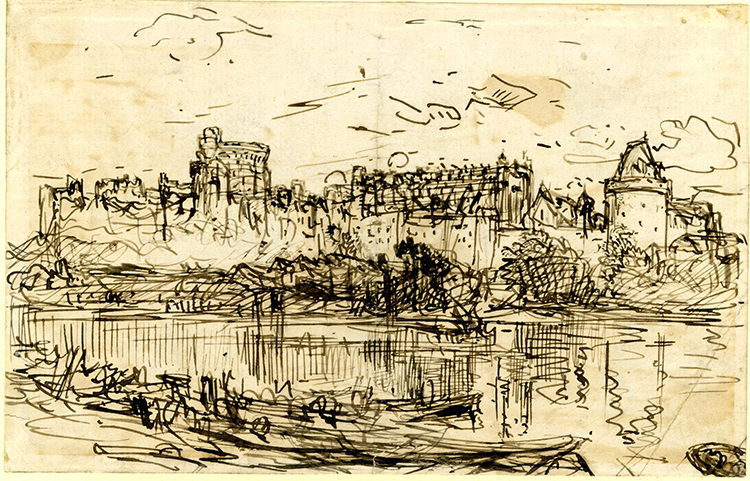 The period known as Interregnum (between kings) lasted from the king's death in 1649 to the year 1660. A republic was established under the leadership of Oliver Cromwell, Lord Protector. Although not a king, Cromwell continued to count Windsor Castle as an official residence. With the Restoration of the Monarchy in 1660, the exiled heir Charles II returned to a damaged and desecrated castle. The new king set to work restoring the residence in Baroque opulence. With the English architect Hugh May, the king created lavish staterooms and a 5km Long Walk which leads up to a magnificent view of the castle. Today many tourists enter the castle this way.

Becoming the Castle of Today 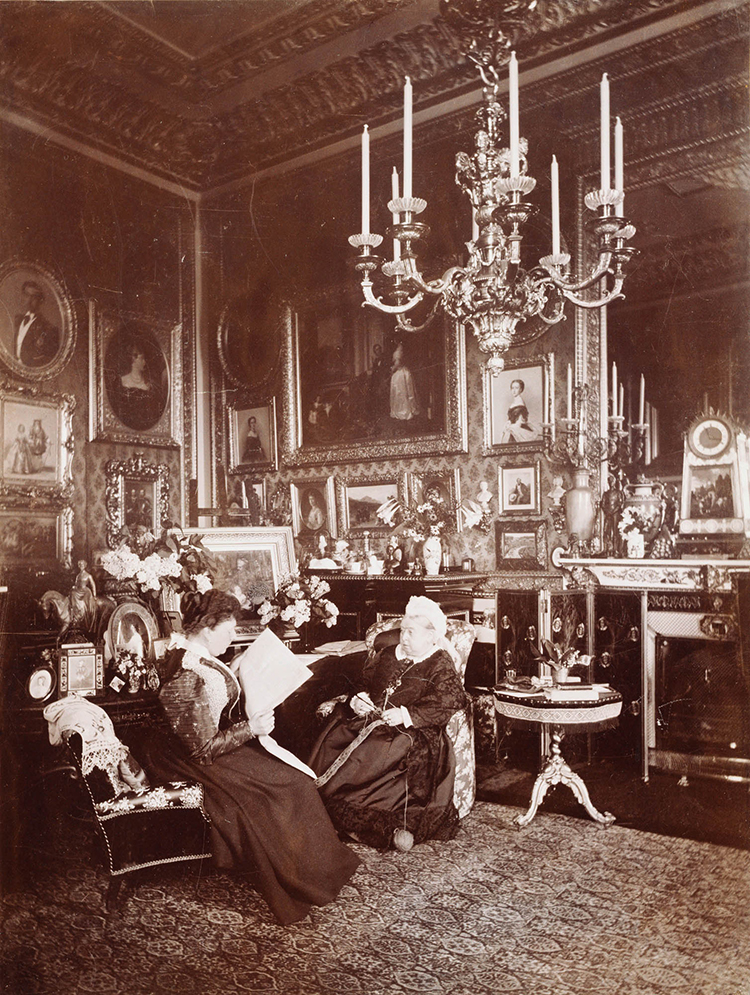 Present-day visitors exploring the interior of Windsor Castle will see characteristics of the 19th-century renovations. Although they appear medieval, the crenellation and turrets visible along the castle walls are a Gothic inspiration added in the 1820s under George IV. These very expensive renovations also raised the height and profile of the central Round Tower. The king also added the Waterloo Hall, one of the sights to see on a trip to Windsor. Inside the magnificent paneled hall hang portraits commemorating the leaders involved in the defeat of Napoleon Bonaparte at the Battle of Waterloo (in modern-day Belgium).

Queen Victoria—the second longest-reigning British monarch after the present Queen—spent much of her time at Windsor Castle, particularly after the death of her beloved husband Prince Albert. She constructed a mausoleum for his resting place on the grounds as one of many tributes she built to his memory. Queen Victoria paid particular attention to the grounds—planting trees and renovating outer buildings. Many of these buildings supported the castle and its staff, while others were (and remain) royal residences for relatives of the sovereign.

In the early 20th century, Edward VII and George V brought modern amenities to Windsor. Under the latter's rule, the Royal Family decided to take their name from the castle, dropping the German moniker which reminded the populace of their relation to the enemy in World War I. Among the additions one can find at Windsor Castle from this period are the extravagant, custom made dollhouses of George V's consort Queen Mary. Among the tiny items on view are royal dinner services, readable books, and even bottles of champagne. Like many treasures, they are now held by the Royal Collection Trust and on display to the public. 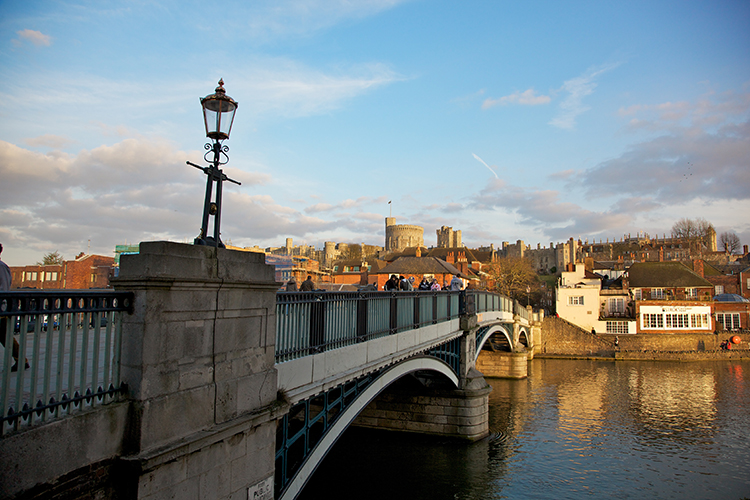 Remarkably, Windsor Castle survived the Second World War. Valuables were removed or hidden and windows blacked out in case of air raids. Like many British children in London, the young Princesses Elizabeth and Margaret were sent to shelter in the countryside—in their case, at Windsor. Their parents King George VI and Queen Elizabeth The Queen Mother were beloved for refusing to leave London during the Blitz, although it is believed they spent many nights at Windsor with their children for security. The castle survived the war, and it later became a favored residence of the present Queen. Her Majesty maintains private apartments, holds knighthood investitures, and hosts horse shows on the grounds. Despite avoiding German bombs, a tragic fire in 1992 raged for 15 hours and destroyed almost a fifth of the castle. The repairs cost millions of pounds but were funded without additional taxpayer money.

Today, Windsor Castle allows Brits and people from around the world the opportunity to explore the nine centuries of history contained within its walls. The Round Tower even has tours where visitors can climb the stairs to the top to take in the view. At present, the building also holds The Royal Archives, visitors will find treasures on view all over the castle; they'll leave feeling like they just traveled back in time.

Can't wait to visit Windsor Castle? Check out their digital collections for sneak peeks of the luxurious interiors. The video below will transport you back in history.

Discover the Intriguing History of an Unusual Castle Built