Art is for everyone, and everyone includes your dog! More Than teamed up with British artist and inventor Dominic Wilcox to create the first art exhibition for canines, which opened for just two days last weekend. As part of the #PlayMore campaign, the interactive installation's mission was to encourage humans to spend more time playing with their animal buddies. In fact, each work of art was consulted by veterinarians to ensure the physical and mental stimulation would be enjoyable for the doggy patrons. Given all the photos of dogs leaping for joy, smelling shoes, and chasing virtual frisbees, the weekend was a success.

Wilcox, the genius behind the exhibit design, curated a series of installations and artwork by other artists to create a puppy paradise. He tells It's Nice That, “Contemporary art has long been an important source of inspiration and fascination for humans, but never before has it been created with a view to drawing the same kind of emotions out of animals instead.” This is why his exhibit features creations such as Dinnertime Dreams—a 10-feet-wide bowl filled with 1,000 dog-food-shaped balls that the pups were encouraged to jump in—and Cruising Canines, an open car-window simulator with a giant fan that wafted scents of smelly shoes and raw meat through the air. Original paintings by Clare Mallison, Joanne Hummel-Newell, Robert Nicol and Michelle Thompson hung on a wall at dog eye-level and depicted such objects as chicken drumsticks, always in the blue-yellow color spectrum available to dogs' eyes.

“While it’s certainly one of the more interesting challenges I’ve faced in my career,” Wilcox says, “it feels great to have created such a truly unique collection of interactive artworks for a completely new audience.” Not only is the exhibit unique, it encourages an important part of life for all animals and humans: playfulness! For more ways to stimulate playfulness with your pet, visit More Than's website for fun game ideas.

Scroll down to see some of the joyous snapshots taken at the Play More Exhibition.

The Vision of Dominic Wilcox in Sketches 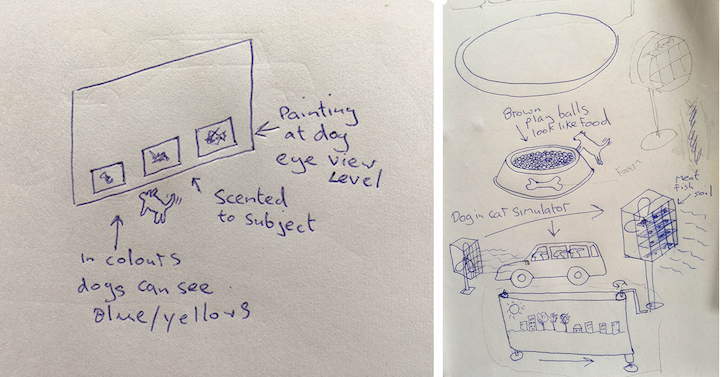 Paintings of chicken drumsticks can make even these sophisticated pups salivate.

This stealthy dog tries to sneak up on the virtual frisbee of artist Nick White's Catch installation.

Sticking your head out of this car ride simulation means getting a breeze of meat and old shoes…yummmm!

All images via Dominic Wilcox and More Than.