Interview: Photorealistic Paintings Put You at the Center of Cities Around the World 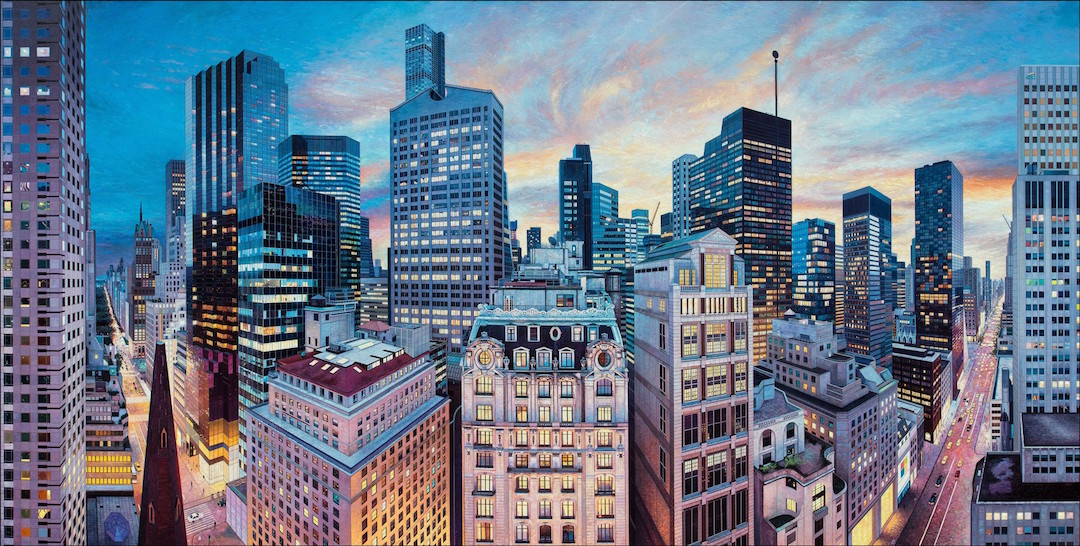 From New York’s glittering skylines to Chicago’s rain-slicked streets, Walsh begins each piece by visiting the locations in real life. He then takes a variety of photographs and draws small thumbnail sketches to decide on his composition and color palette. Takes his research back to his studio, the artist proceeds to map and draw out detailed, grid-like blueprints of each location on his large-scale canvases. Each painting then comes to life with layers of colorful oil paint.

Rather than reference one photograph, Walsh composes his own reality of the urban environments from a variety of his images. “Freehand drawing is fundamental to all of my work, allowing me to take full ownership of photographic material,” he explains to My Modern Met. “Rejecting the mechanical transfer of imagery forces me to construct each object from scratch and allows for a fluid and inventive approach.” Clever perspective points allow the viewer to feel as if they are at the center of realistic scene and could step inside the canvas to walk among the neon-washed streets.

You can see Walsh’s New York City paintings in his upcoming solo exhibition at Bernarducci Gallery in Manhattan starting September 6 and running through September 29, 2018.

We recently spoke with Walsh to ask about his inspiration and processes. Read on for our exclusive interview.

What draws you to depict cityscapes?

Cities seem to offer unlimited possibilities for making paintings. I’m drawn to their complexity and the excitement of exploring new locations.

Do you have a favorite city or piece of architecture?

Perhaps because I visit New York frequently I have become drawn to certain locations within that city. Queensborough Bridge which connects Queens to Manhattan has appeared a number of times in my work so must rank as a favorite location. 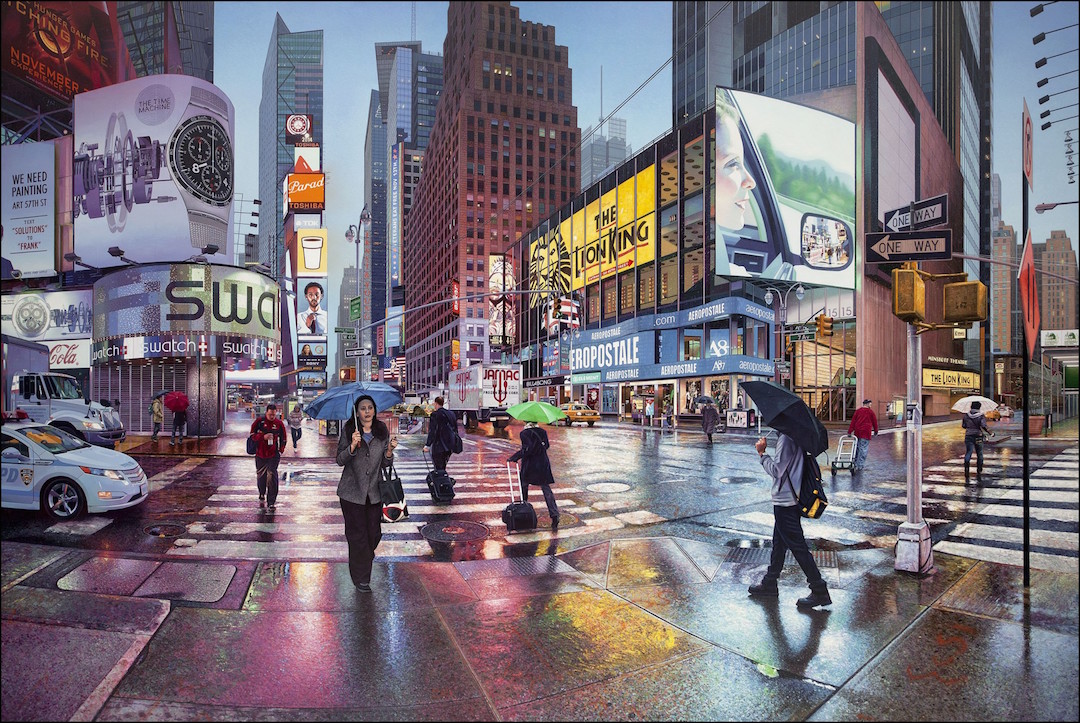 What is your background in art?

I followed a fairly normal path through art education in the United Kingdom. After school, I completed an art foundation program, then I obtained a degree and masters degree in Fine Art painting. I started exhibiting my work locally and nationally which led to some recognition and a permanent teaching post at an art college in the North of England. My teaching job allowed me enough time in the studio to develop my practice and I started to achieve commercial success in London and European galleries.

About ten years ago, I was able to leave my post and paint full-time, this coincided with representation by the New York art dealer Frank Bernarducci. Frank, through various projects and galleries, has been a long time supporter of contemporary realist painting. 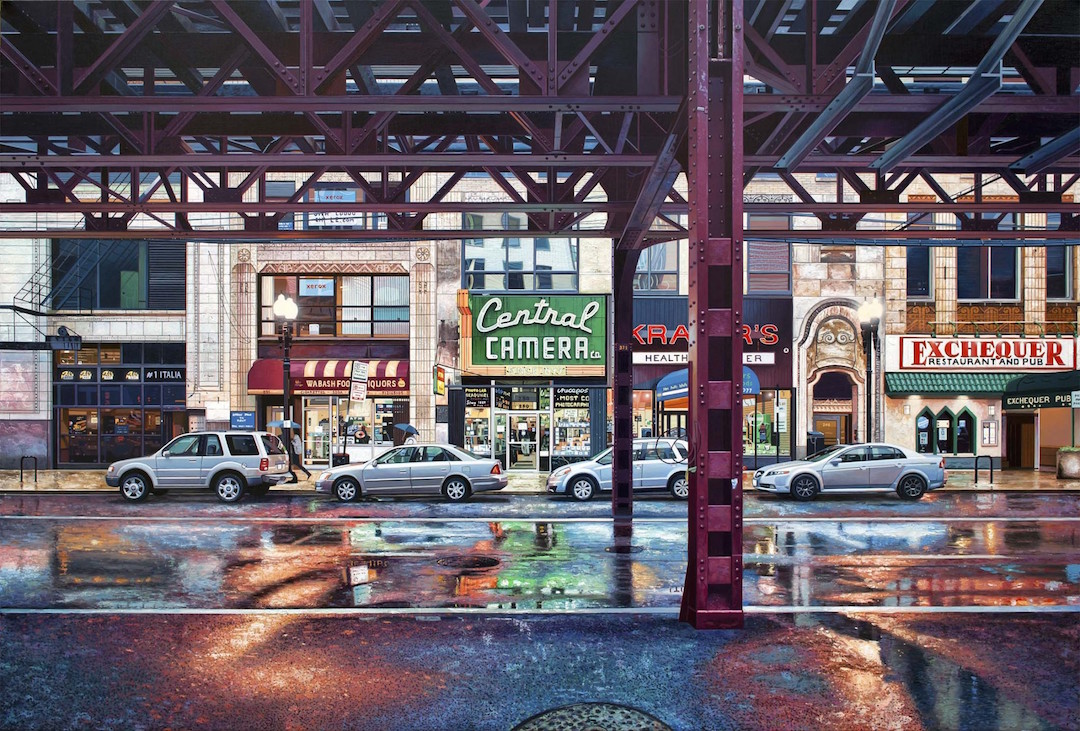 Are there any photorealist artists, past or present, that you take inspiration from?

I’m influenced by hundreds of other artists from different movements and time periods. The first generation of photorealist painters have certainly been an influence on my activity. However, anyone who takes the time to view my work in person would not label me as a photorealist. My work is built on a personal visual language where drawing is key. The use of paint and color is also explorative and makes reference to many other artists. 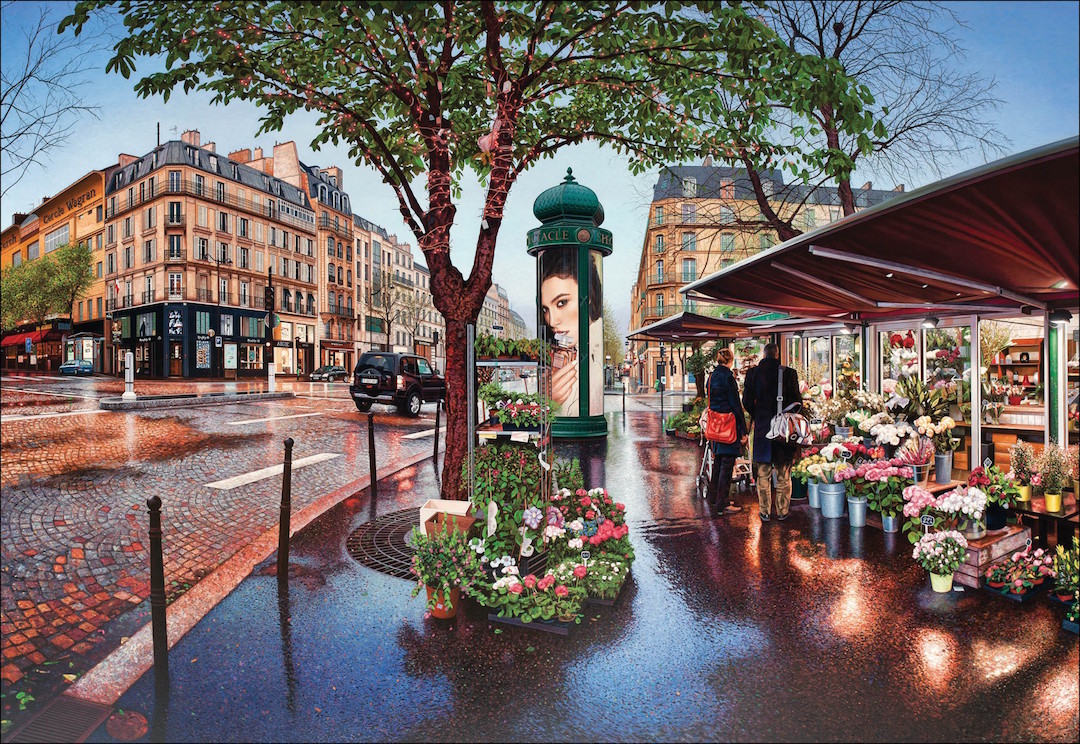 Before I visit a city I tend not have a clear idea of what I’d like to paint, I just tend to amble around, very much like a Flaneur waiting for something to connect with. When I do find something of interest, I’ll take numerous photographs of a location and normally a series of thumbnail drawings in a sketchbook. Of late I’ve found the sketchbook to be on increasing importance even for notes on color or whatever I happen to be thinking about at the time. This immediate personal response to the environment plays an important role when I’m back in my studio in the United Kingdom and reliant on the photographs taken.

Back in the UK I will sift through the raw material I’ve collected and make a series of postcard sized drawings which suggest potential paintings. I pin these to the studio wall and live with them for a while. Most get rejected, but whichever one I eventually chose must have the most visual potential to make a dynamic full scale painting. Once I’ve decided on the size of the painting I start to draw elements in a fairly loose and organic way. Freehand drawing is fundamental to all of my work allowing me to take full ownership of photographic material. Rejecting the mechanical transfer of imagery forces me to construct each object from scratch and allows for a fluid and inventive approach. Fixing pictorial elements to separate vanishing points allows the construction of a space independent of both reality and any photographic record of the scene. A shifting horizon line allows the viewer to look up and down into the space, and question their position in relation to the scene.

This drawing stage can take up to a month for a large painting, In some ways it could be argued as the most creative part of my activity. Once complete, I brush over a glaze of oil paint and begin blocking areas of color with heavily diluted washes of paint. Over the subsequent months, paint layers are built up and sanded away. The goal is not to mimic the flatness of a static photograph but to make reference to a rich lineage of European and American painting, seeing my work up-close reveals a personal system of mark making and investigation of the physical properties of oil paint. Surface and texture have becoming increasingly important to me; finding new ways of applying and manipulating paint leads to richer and unexpected outcomes. 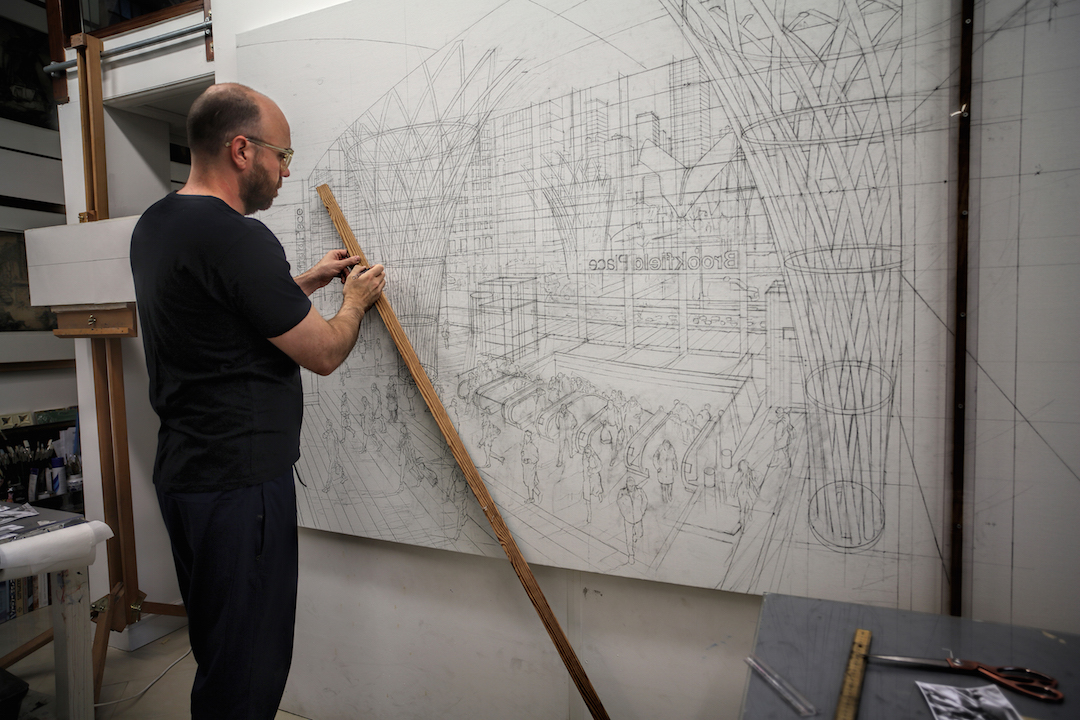 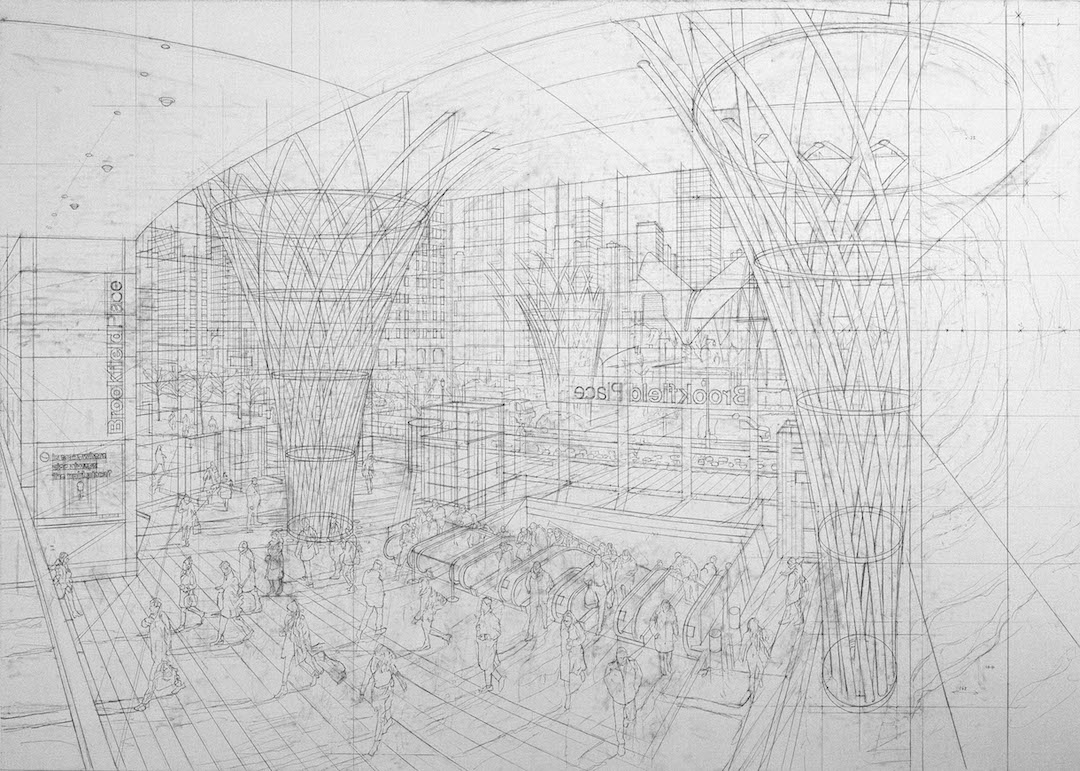 What are the most challenging parts to creating your work?

The challenge is to make it challenging! I think it would be easy to keep making the same painting again and again. For me, the most exciting aspect of being in my studio everyday is trying to do things differently and finding more exciting or elegant ways of responding to the modern urban environment. 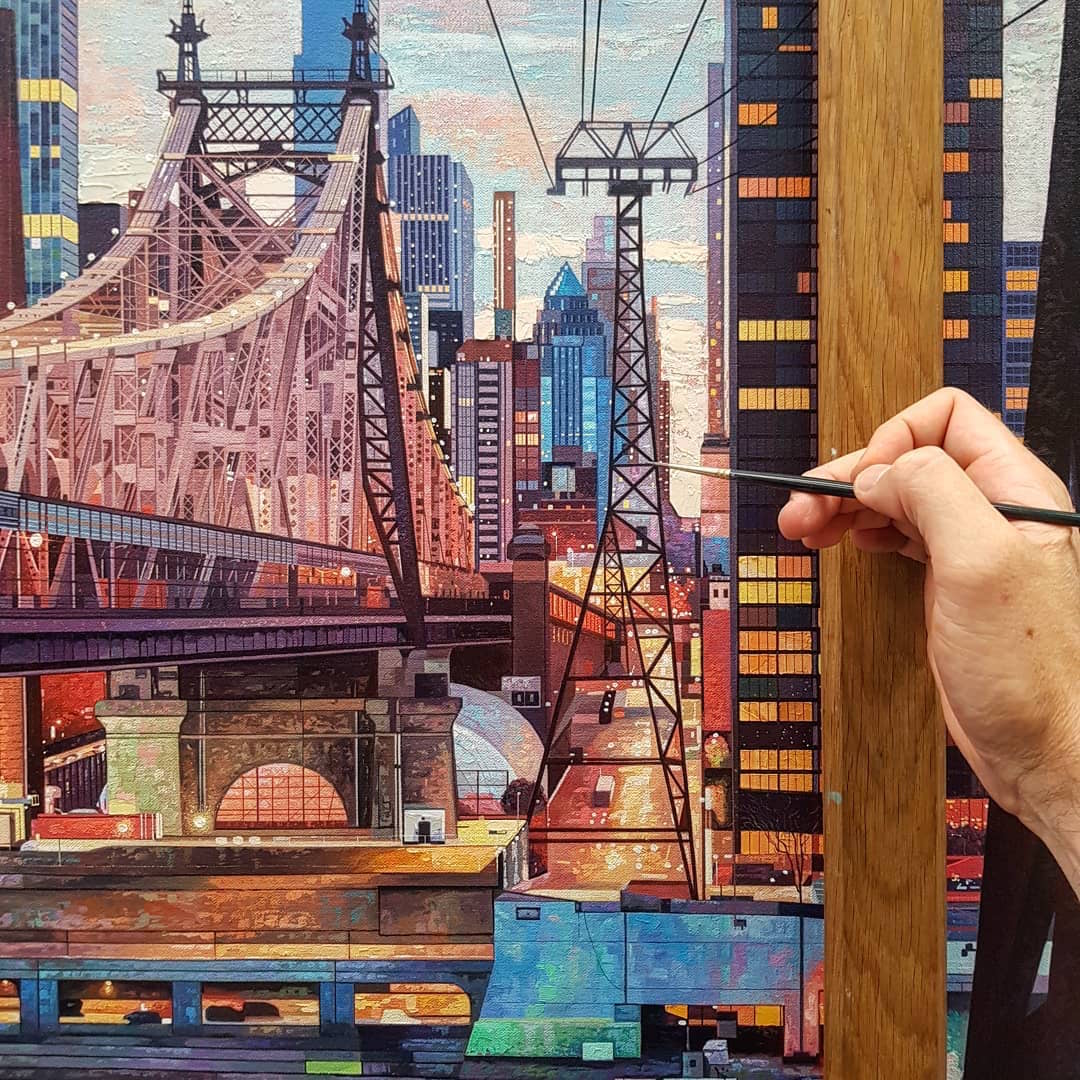 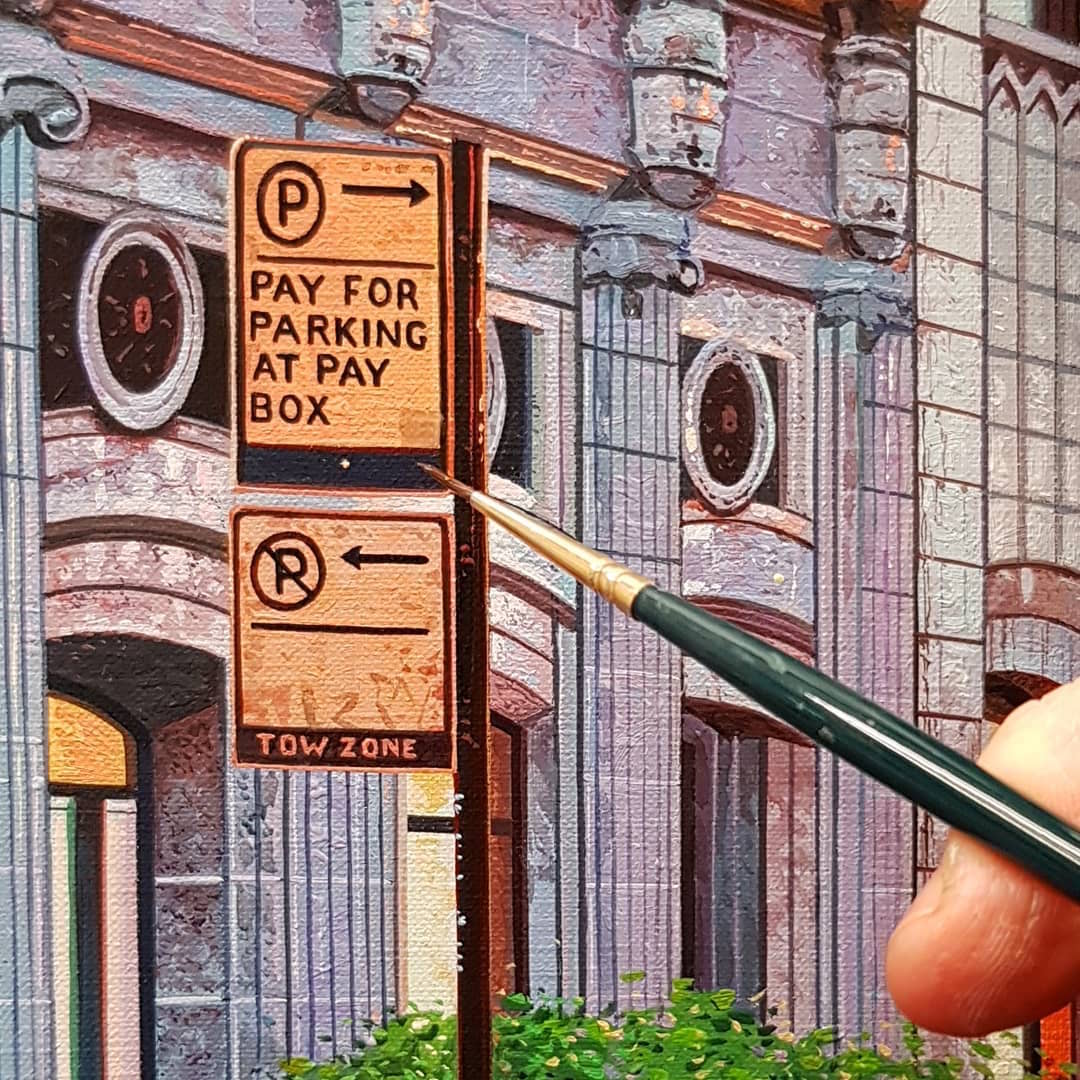 Can you tell us about your upcoming exhibition at Bernarducci Gallery in New York?

My exhibition this September 2018 brings together most of the works I’ve made over the past three years. The last solo show I put together was in 2013, so hopefully this one will represent an obvious development of my practice. The 6 or so paintings are celebratory of the modern city and the act of painting itself. Clive Head, one of the most important contemporary realists sums it all up brilliantly in the essay he wrote to accompany the show. It can be read in the essay section on my website. 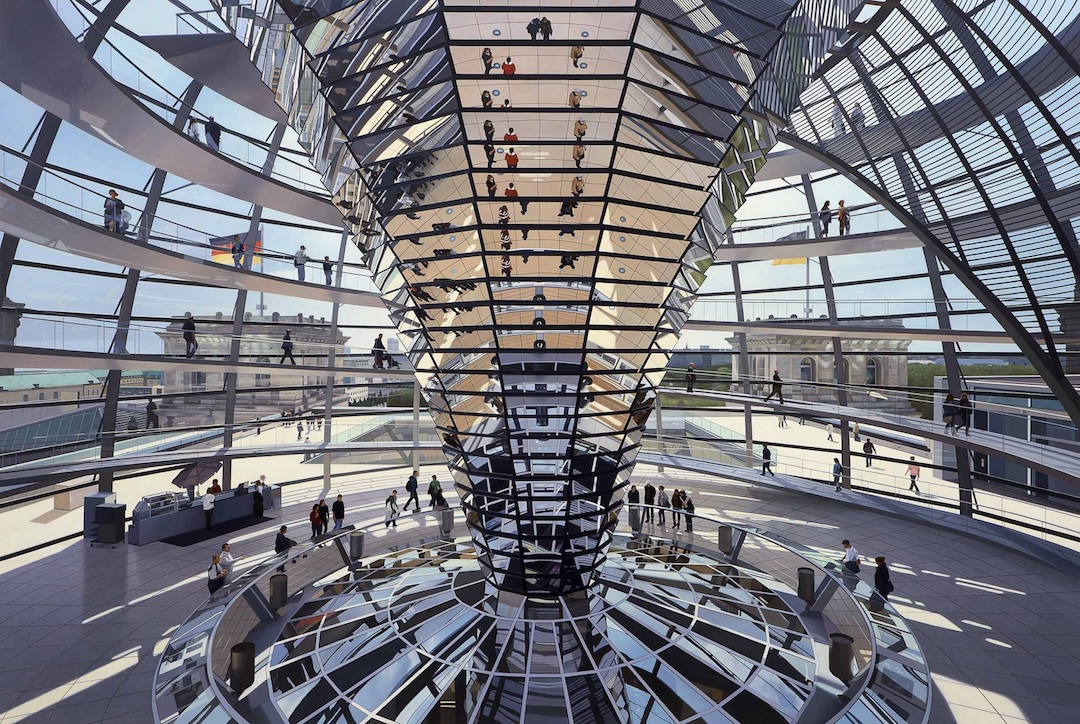 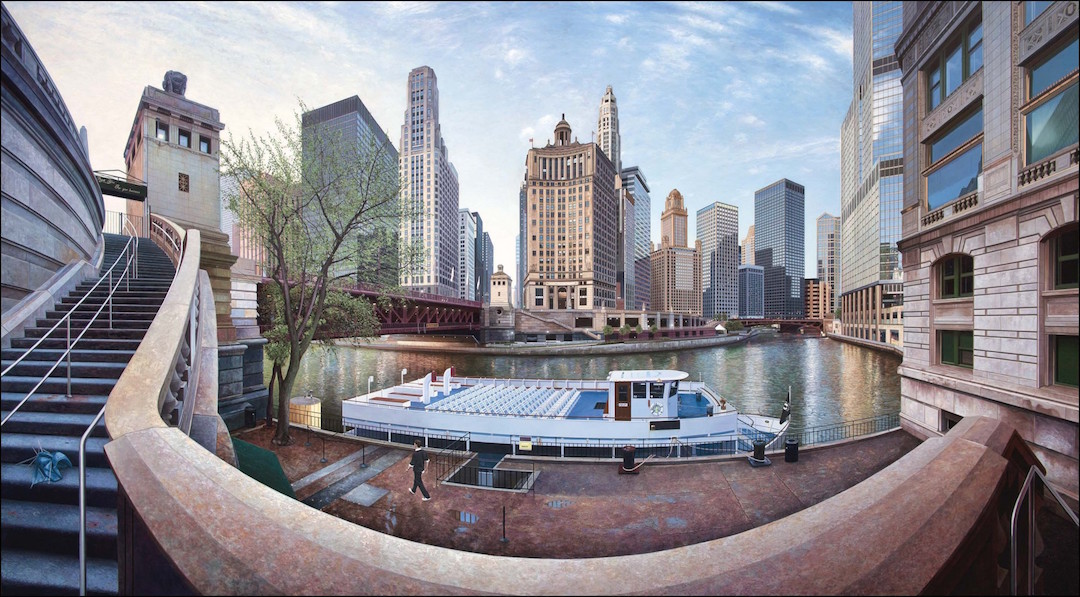 I’m making a miniature painting which will be part of touring exhibition around Spain next year. It’s an opportunity to do something a little different and playful. Other than that, I’m excited about a large painting I’m making which is based on the World Trade Center area in NYC. It connects inside and outside spaces, a mix of architectural information and a strong human element. That should be enough to keep me busy in the coming months! 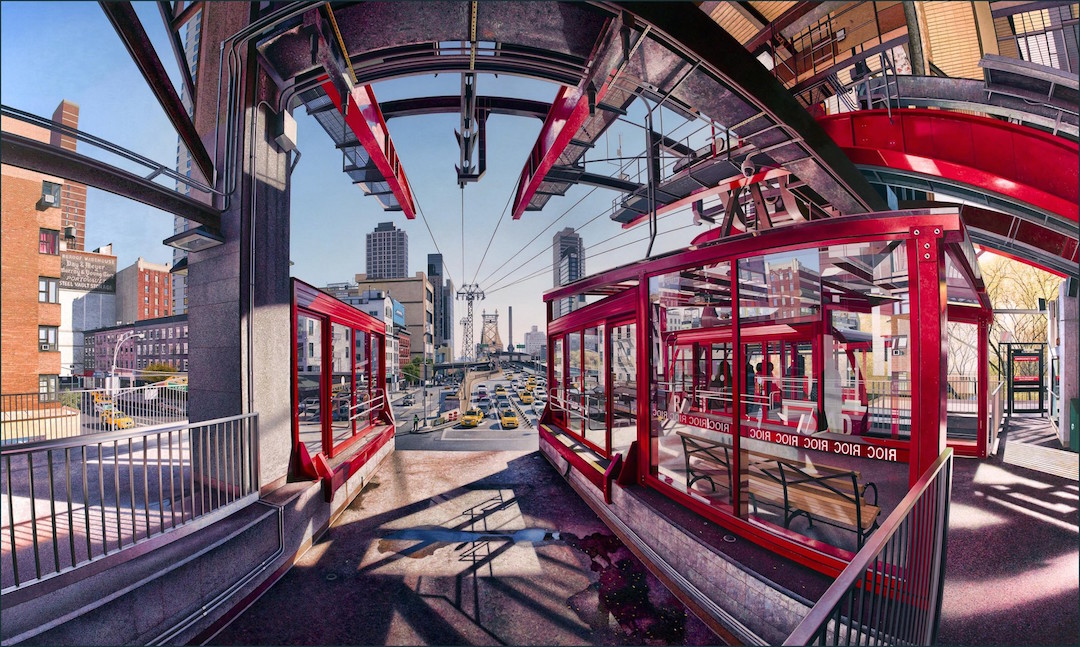 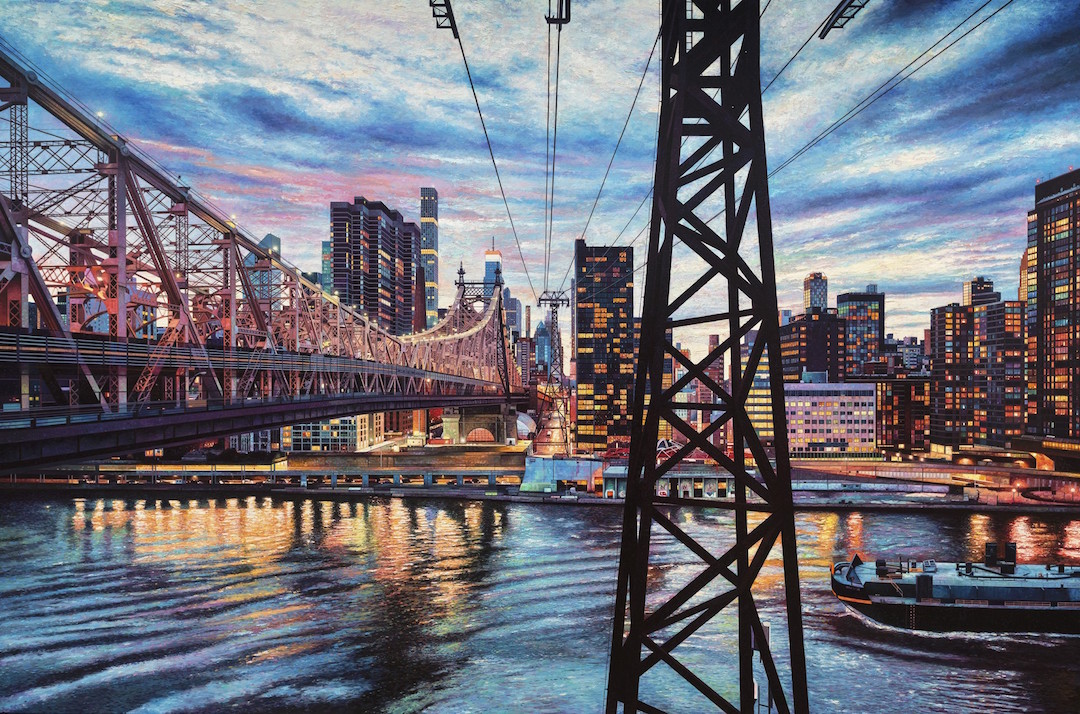 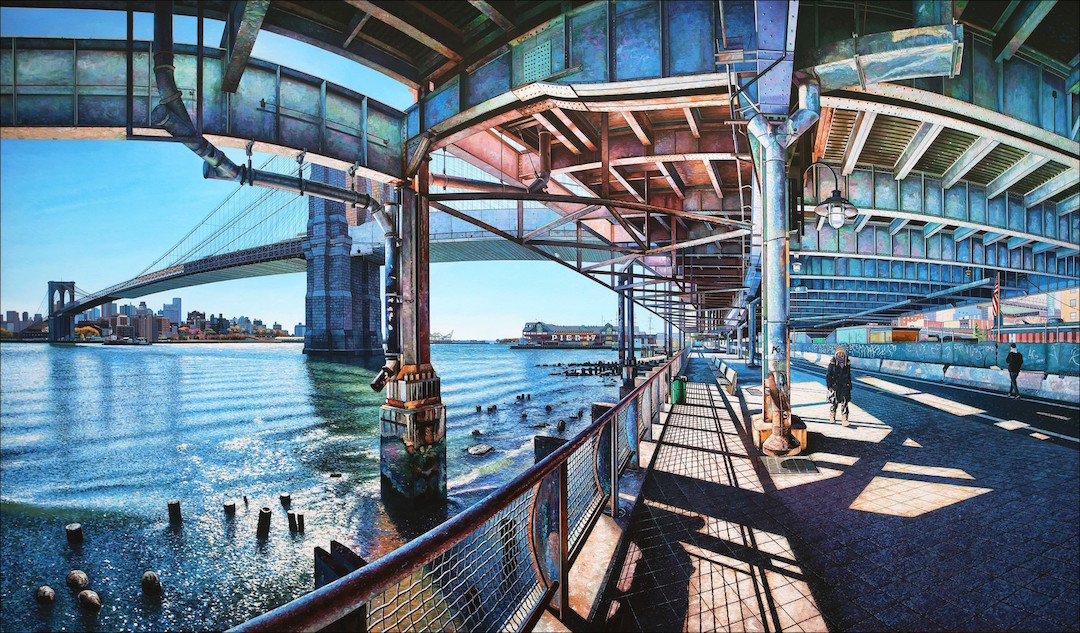 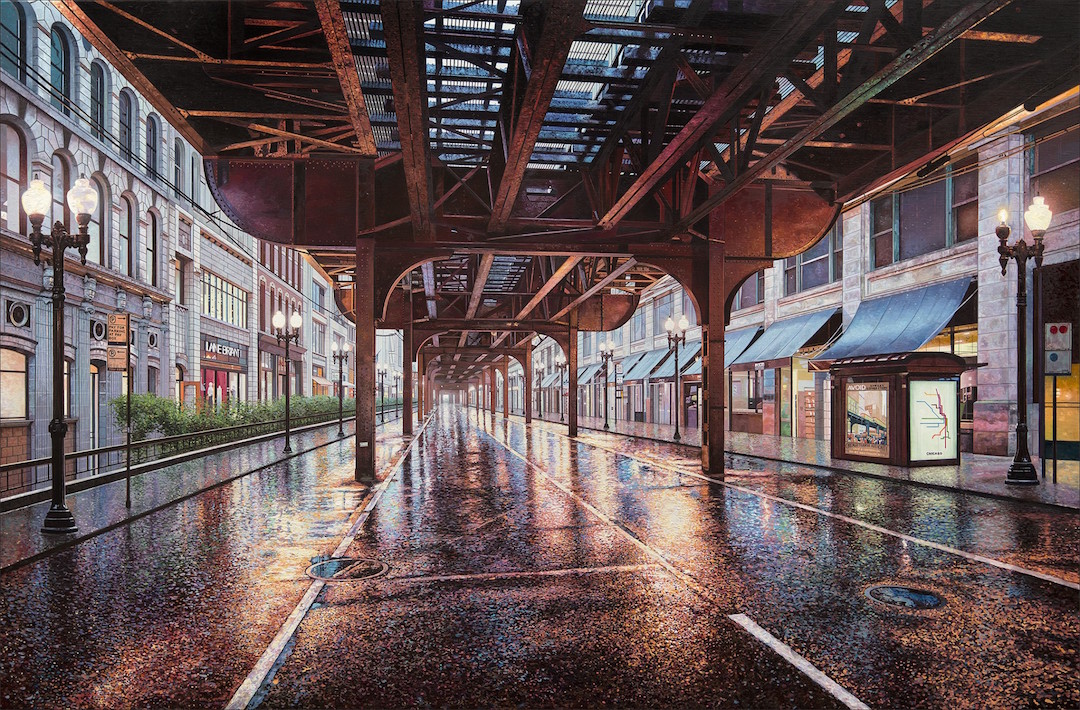 My Modern Met granted permission to use photos by Nathan Walsh.

Impressed by these paintings? Share
Like My Modern Met on Facebook
Get Our Weekly Newsletter
Become a
My Modern Met Member
As a member, you'll join us in our effort to support the arts.
Become a Member
Explore member benefits