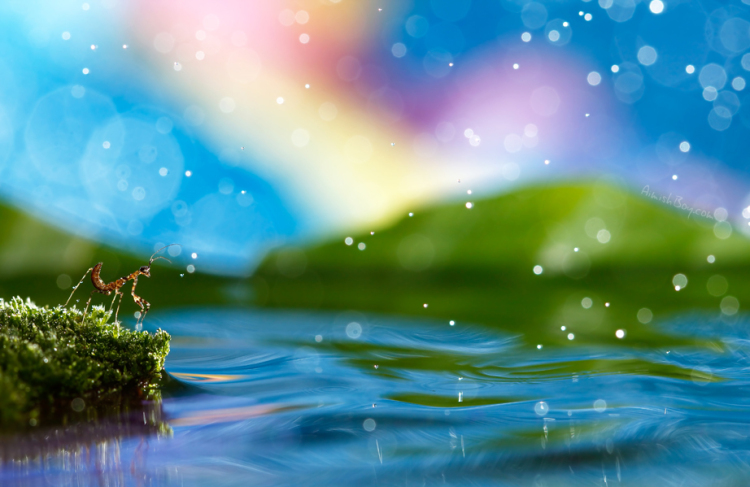 When we first came across Nadav Bagim's macro insect photography, we were taken aback by just how magical he could make their miniature world look. His photos seemed like they came out of a storybook or a Disney/Pixar movie. Filled with beautiful colors and a generous helping of bokeh, they seemed almost out of this world. After we found out that he only uses Photoshop for slight tweaks, we were even more impressed. So much so that we got in touch with the photographer to ask him a few questions about his creative process and to see if he might share with us some of his tips. Read our interview with Nadav, below, while enjoying some never-before-seen photos as well as some behind-the-scenes shots.

What inspired you to start this series?

When I started working on the series, I didn't even know it was going to become one. At the time, I was trying to work on something that started with my previous series, Super Macro, creating a new world of miniature landscapes (real and surreal) and understanding the perspective and lighting setup to achieve that effect. The first photo from the series was the Snow Globe Ant (see immediately below), and it gave me the inspiration to continue and develop the series while baring in mind the influence of many years of affection for sci-fi, fantasy and cartoons. 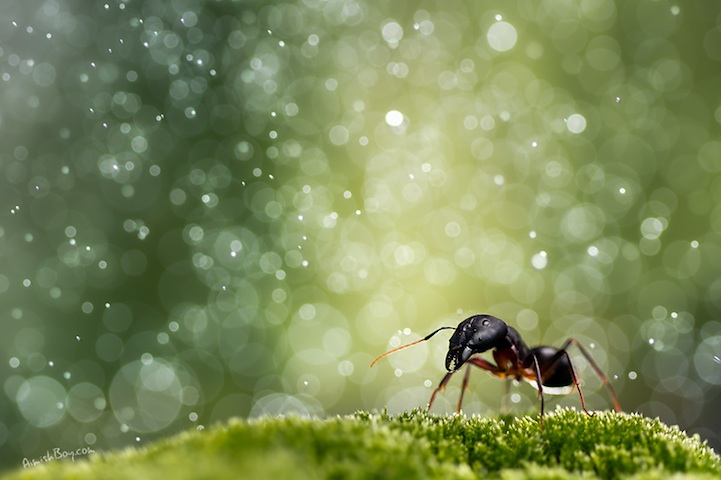 I would also like to note the works of two extremely talented photographers whose work inspired me greatly through the earlier stages of my photography – Leon Bass and Igor Siwanowicz. I was mostly influenced by their approach to macro photography, and another artist, Matthew Albanese, who creates absolutely mind-blowing small-scale landscapes models. Their works lead me to the idea that given sufficient knowledge, creativity and technical control, your imagination is the limit. 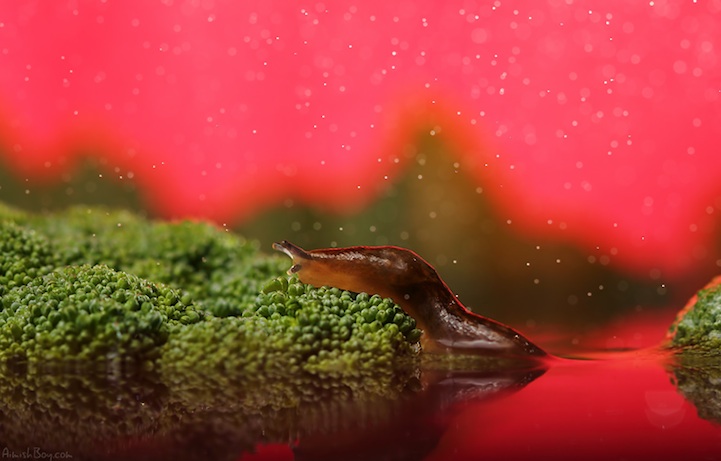 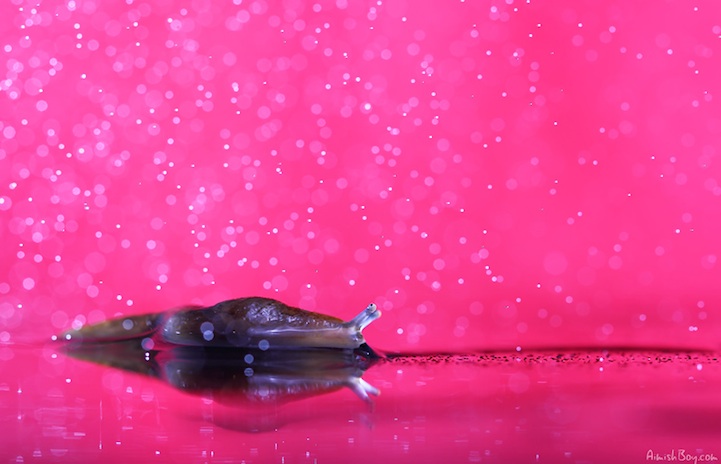 How did you shoot all of this all in-camera?

Knowledge, experience and, most of all, lots and lots of patience.

There are two aspects to that. The first one is building the set. Sometimes it can take several minutes but it usually takes more than an hour, depends on how complex it is.

The other element is the cast. Once you have your set ready, your world, you introduce it to your little models, the insects.

Directing the insects requires understanding of their behaviors. Once you do understand, you'll know how to make them feel comfortable so they won't run away and how to make them stand and pose the way you want them to. The trick is to “convince” them that they were the ones who chose what to do and where to stand. Taking the insect and placing it at the center of the stage just won't do. You have to lead them slowly to the point you choose. For example, you slowly move a small cube of sugar and let them follow it. But that kind of interaction requires a lot of patience and gentleness. A shooting session can easily reach several hours. I never start shooting this way unless I know I have at least about 12 hours to spare, just in case. Of course it's in an eased fashion with a lot of intermissions for me and for the models.

How did you make the colors pop?

One, I use colorful objects – colored plastics bags, flowers, leaves and such – which are placed depending on what I'm trying to achieve. The second way is lighting. Strong light brings out the colors and when they are colorful to begin with, it pops out even more. Sometimes I use only one flash and sometimes up to four at once. 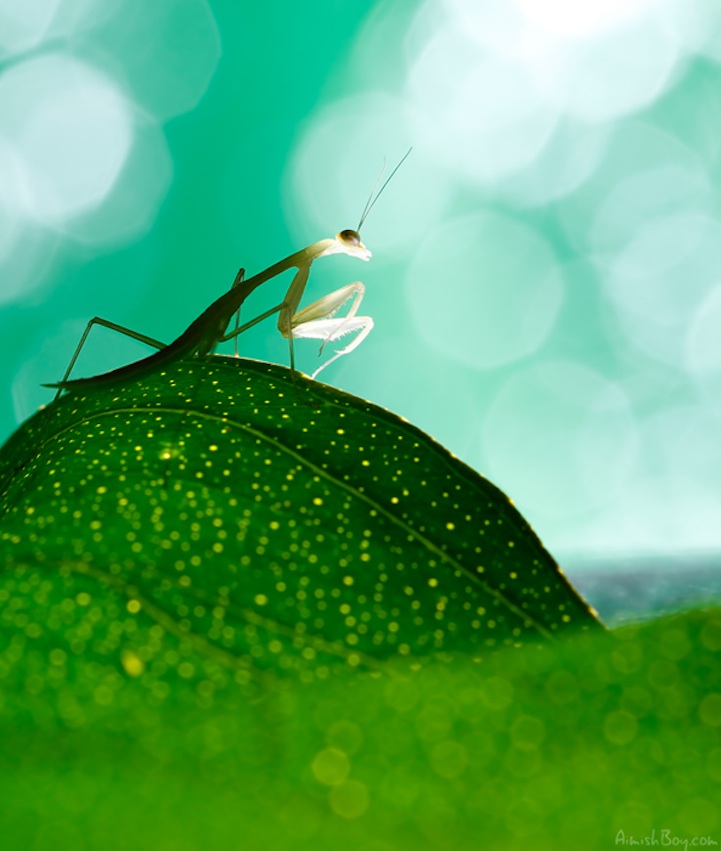 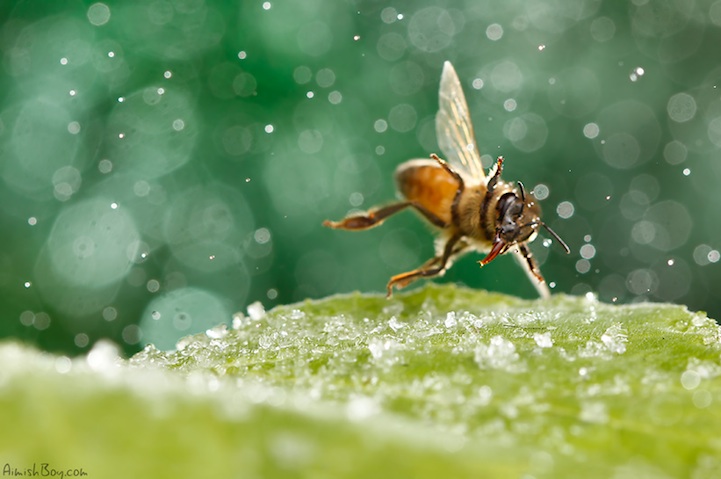 You seem to love bokeh, did you try and achieve this look on purpose?

I do love bokeh. Usually macro photographers shoot with a closed aperture to overcome the shallow depth of field. Personally I prefer shooting with open aperture. That causes the background to look like a drawing and the photo appears cleaner and more pleasant, it also leaves more to the imagination. In most cases, even if you have a very shallow depth of field, as long as your subject's eyes are in focus, the outcome will be acceptable.

About the bokeh in this series, as I said at the beginning, I didn't know exactly what I wanted to achieve. I was just experimenting until I found a result which I loved and then I tried to develop it according to my point of view. The same goes for that ‘snow' that appear in most of the photos. Since I work in a very associative way, a lot of ideas come from frames I missed or that went wrong (i.e. one of the flashes stops working). I look at them later on and think to myself, “Hey, this looks like a mountain, this looks like a sun, something like an associative Rorschach game,” and then I try and retrace my steps and learn how to do it now on purpose and in a more accurate way. 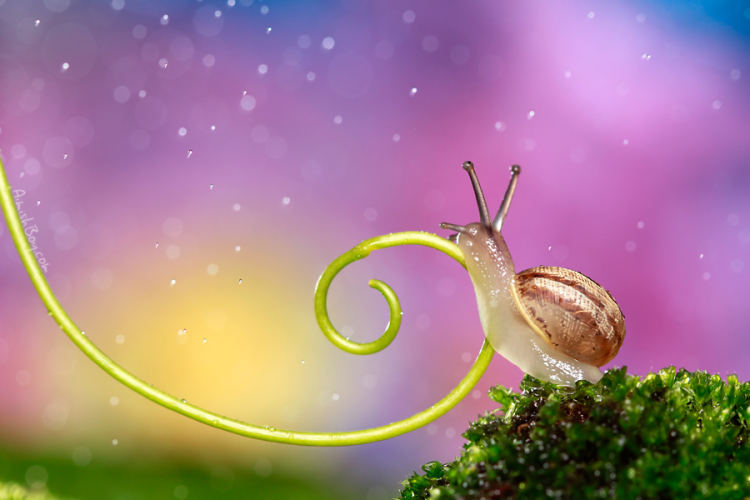 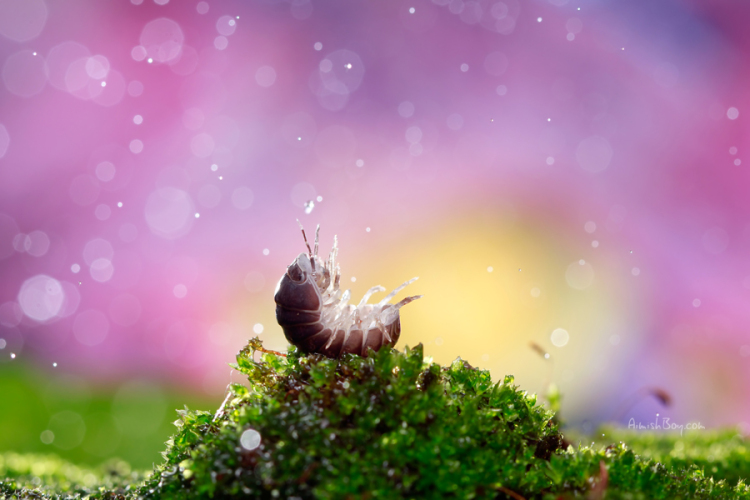 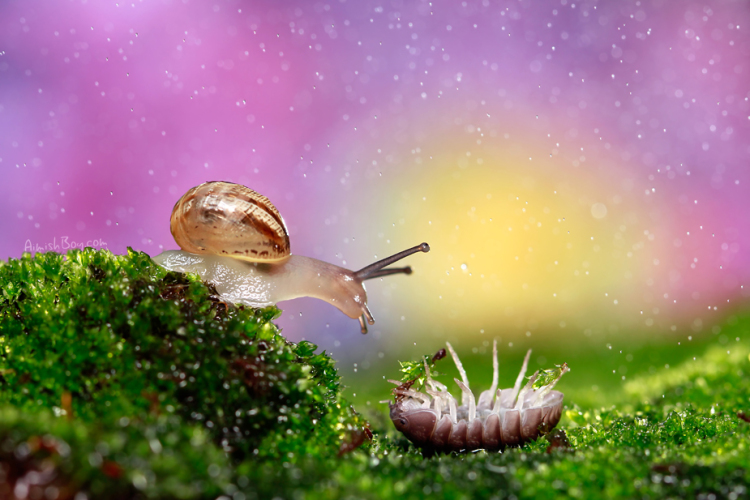 Was there really NO Photoshop used in this set?

It flatters me that people think it's impossible to get that outcome without digital manipulation, but the photos are real and not a digital manipulation. If we are talking about the common phrase “photoshopped,” then no, this is a genuine photo and not a digital artwork. But working with a digital file dictates use of digital editing tools – resizing the photos for web, embedding my autograph or converting from RAW to JPG – will make use of Photoshop and it's similar.

But that's not the only thing I used Photoshop for. Sometimes the photos require a little fine tuning that mostly includes general brightness/contrast, white balance correction, and noise reduction. But there is no change in the content of the photo. This is not a photomontage, no pasting in or cutting out objects, no selective coloring or saturation boosting or anything similar. The colors are real, the “snow” is real, and so are the insects, landscapes and the rest. It takes a lot of time, effort and shutter clicks to synchronize all those elements together to a single moment in time, but the satisfaction you get when it all works, is worth it. (See some making of shots, below.) 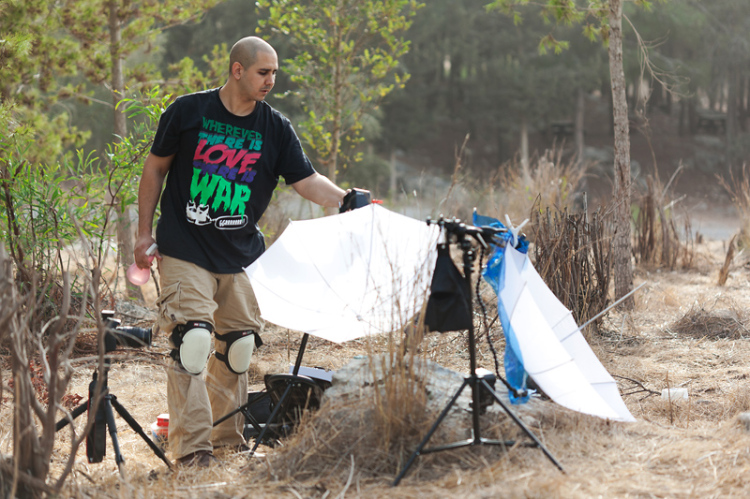 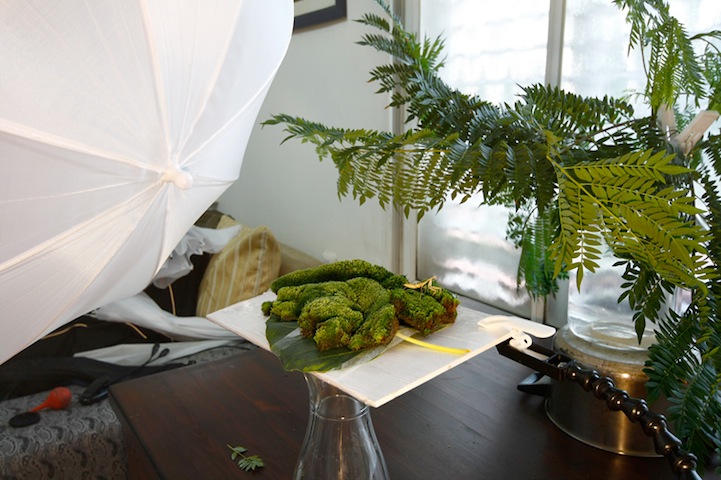 Finally, can you give us some tips on how we can do something like this?

– Watch nature shows and the insects around you. Next, interact with them, gently and carefully not to hurt them. Practice, for example, letting them climb on a stick, and then walking down from it. Praying mantises, for example, usually love to climb up to higher places. Use that and, in time, you will gain more confidence and control on how they react.

– Grow a little garden just outside your house and spray sugary water on them, the sugar will attract various insects like ants, butterflies, bees and more. In time, other insects like spiders and mantises that feed on the small ones will come as well.

– Be patient. I can't stress that enough, so you won't hurt the insect and so he'll be cooperative and at ease.

– Buy yourself a flash, no need for something fancy. I use a YN560 from eBay, strong flash with great manual control and its price is low in comparison to what you get. A flash will let you understand better how to use light in your photos and it doesn't limit you to natural light. Just think that you have a small sun in your hands for use whenever you need it.

– Trial and error is trivial and yet so many people are just afraid or avoid trying. Some people expect a creative photo to just pop at the first shutter click. Well, it doesn't work that way. Every good photo has a lot of unsatisfying predecessors which get better from frame to frame. So schedule yourself once in a while an experiments set, that way you would feel freer to roam new approaches and techniques.

– Next time you are at the supermarket try to look at the objects in the fruits and vegetables department as potential setting objects and not just potential dinner, from broccoli to mushrooms.

– And the most important thing, don't patronize insects, shoot them at eye level.

Thanks so much for the interview, Nadav, and for letting us into your magical world. We'll never look at insects the same way again!