Interview with the Moon Man 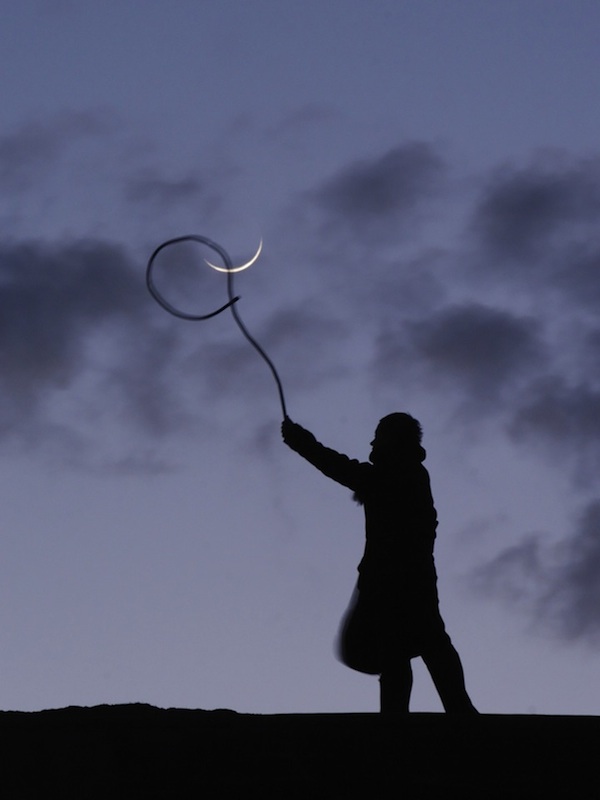 If you want to get lost in some celestial photography, look no further than TWAN or The World At Night. As their website states, “The World At Night (TWAN) is a program to create and exhibit a collection of stunning photographs and time-lapse videos of the world's most beautiful and historic sites against a nighttime backdrop of stars, planets and celestial events. TWAN is a bridge between art, humanity, and science.” Basically, TWAN is a gathering of some of the best night sky photographers around the world. Their collection is presented in an international traveling exhibition and in a virtual exhibition on the TWAN website. One very talented photographer who is a part of this project is Laurent Laveder, a man who you might remember as the one behind the charming moon photos I wrote about here. After NPR wrote about Laveder's moon photos and his book Quartier Libre (and we picked up the story), Laveder sold 25 copies of the book, which doesn't seem like a lot until you realize that it's written completely in French and they were sold to English speaking Americans. Of course, this just goes to show that beautiful photos can transcend any sort of language barrier. I got in touch with Laveder, after the post, and was able to ask him some questions. Read that interview, below, and if you've joined us recently, make sure to check out the first post for some context. When did you first start taking pictures of the moon and why did you start the series? I'm an amateur astronomer using photography to capture the things I can see. For years I've been interested in landscape astrophotography, taking original astronomy pictures, as my colleagues of The World AT Night (TWAN) are doing. Five years ago, after talking with my girlfriend Sabine about the relative originality of my moon pictures, we decided to try to make more original photos. This is how our Moon Games project began. Before each series, we go through a brainstorming session together and create little drawings to represent the way the character will play with the Moon. Which is your favorite shot and why? We made two kinds of Moon Games: Dreamlike (or poetic) photos and science-based pictures. For the first category, I like this photo because of its soft look and the global photographic composition. But I also really like this one for its visual impact. For the science photo, it's the one where the hoop is materializing the diameter of the Earth shadow during a partial Moon eclipse. Where were these taken and who are the people in them? We took them on the Trguennec beach (north-western France, 20 km from his home). This beach is large and long, so it's easy to shift with my camera in order to make Sabine interact with the Moon. Usually, Sabine is the character playing with the Moon (she's not only my Moon mannequin, but also the co-designer). For one series, we asked professional basketball player Mathieu Tensorer to make the orange, rising Moon his ball. How does being an astronomy journalist influence your photography? I like to use nice pictures of the sky to reveal astronomy or physics phenomenons and to explain them. This was the aim of my first book. Usually, astrophotographers use telescopes to isolate the Moon, planets, nebulae or galaxies. They produce abstract views of the sky. My pictures are exactly the opposite because I always frame the sky with the landscape, making more concrete views. People think they are more real because these pictures look familiar. For our Moon Games, being an astronomy journalist has almost no influence. What are some photography tips you can give to others who want to take their own moon photos? It's important to plan this project because once in front of the Moon, it's rising quickly. You also need a good reflex camera to allow low-light photography (up to 1600 or 3200 ISO) because to increase the depth of field, you need to stop down strongly the telelens diaphragm. But it's often not sufficient with a 200 or 300mm telelens, so I had to decide which subject will be in focus: the character or the Moon. Once these two conditions are met, have fun! The lens quality isn't a real problem. This is sensitive photography, not scientific one! Thanks for the interview, Laurent. We can't wait to try this out ourselves. Laurent Laveder