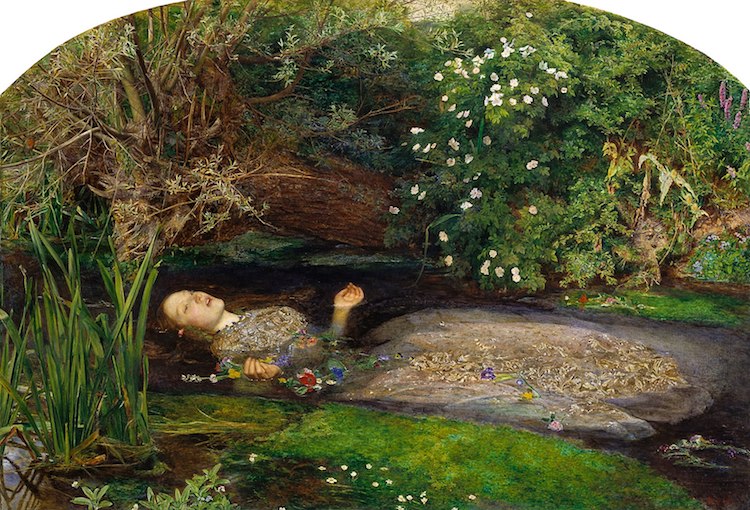 In 1848, a secret society of artists took root in Victorian England. Known as the Pre-Raphaelites, members of this brotherhood believed that painting had blossomed before the Renaissance, citing Raphael's idealist approach to subject matter as the age-old discipline's downfall.

In order to bring painting back to its golden age, the Pre-Raphaelites banded together, unified not by a specific style but by a desire “to have genuine ideas to express”–and a drive to “to study Nature attentively, so as to know how to express them.” John Everett Millais, one of the movement's founders, embodied this approach with his Ophelia, a poignant and poetic Pre-Raphaelite painting. 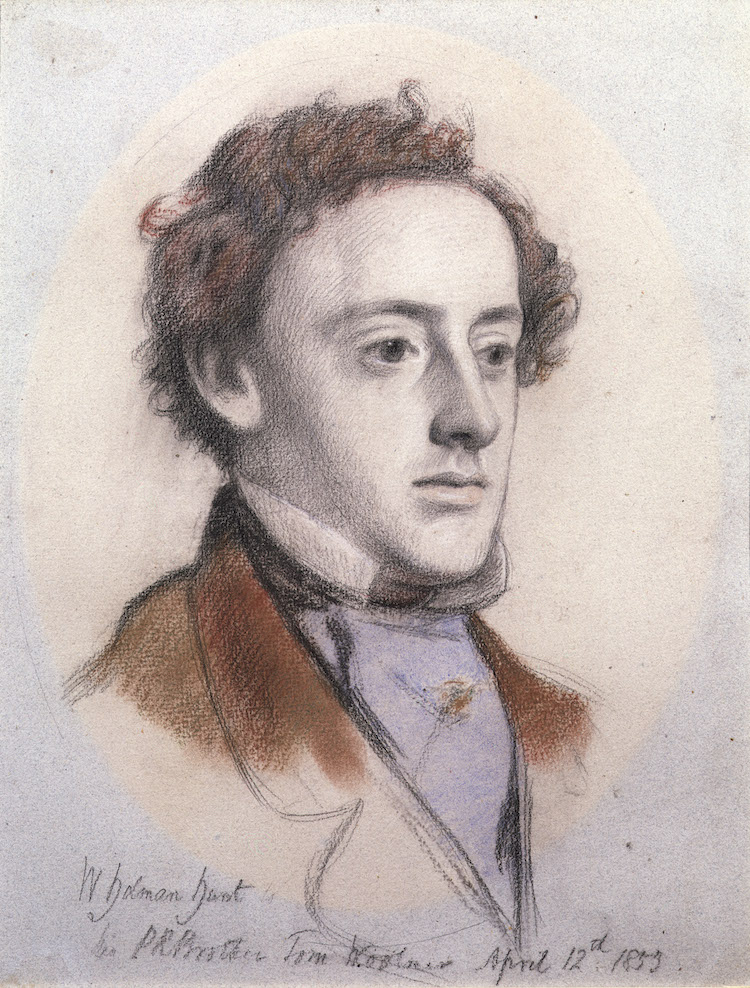 From a young age, Millais was trained as a traditional painter. At just eleven years old, he became the youngest student admitted to the prestigious Royal Academy Schools. Over the next few years, he would excel as a historical painter before subverting the academy's Renaissance-centric curriculum with avant-garde paintings like Ophelia. 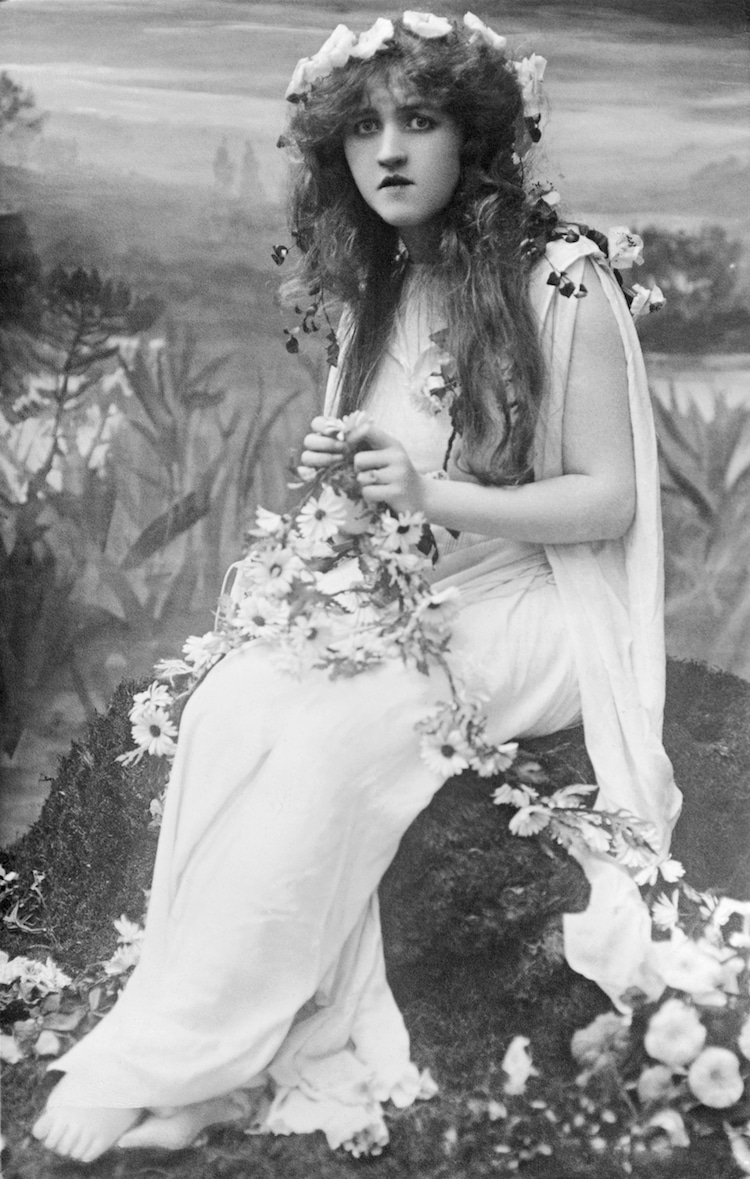 Rendered in oils on a 30 by 44-inch canvas, the painting depicts the death of Ophelia, a character in William Shakespeare's Hamlet (ca. 1599-1601). In the play, Ophelia is driven mad and drowns after discovering that her partner, Hamlet, has killed her father. While her death scene is not explicitly acted out in the play, it is described in poetic detail by Hamlet's mother, Queen Gertrude, in Act IV, Scene vii:

“There is a willow grows aslant a brook,
That shows his hoar leaves in the glassy stream;
There with fantastic garlands did she come
Of crow-flowers, nettles, daisies, and long purples
That liberal shepherds give a grosser name,
But our cold maids do dead men’s fingers call them:
There, on the pendent boughs her coronet weeds
Clambering to hang, an envious sliver broke;
When down her weedy trophies and herself
Fell in the weeping brook. Her clothes spread wide;
And, mermaid-like, awhile they bore her up:
Which time she chanted snatches of old tunes;
As one incapable of her own distress,
Or like a creature native and indued
Unto that element: but long it could not be
Till that her garments, heavy with their drink,
Pull’d the poor wretch from her melodious lay
To muddy death.”

Millais' painting portrays Ophelia moments after she “fell in the weeping brook” while trying to drape garlands of wildflowers from “on the pendent boughs” of a tree. While her “mermaid-like” skirts initially kept her afloat, they soon become “heavy with their drink.” As she sinks, she softly sings to herself, until she meets her tragic “muddy death.” 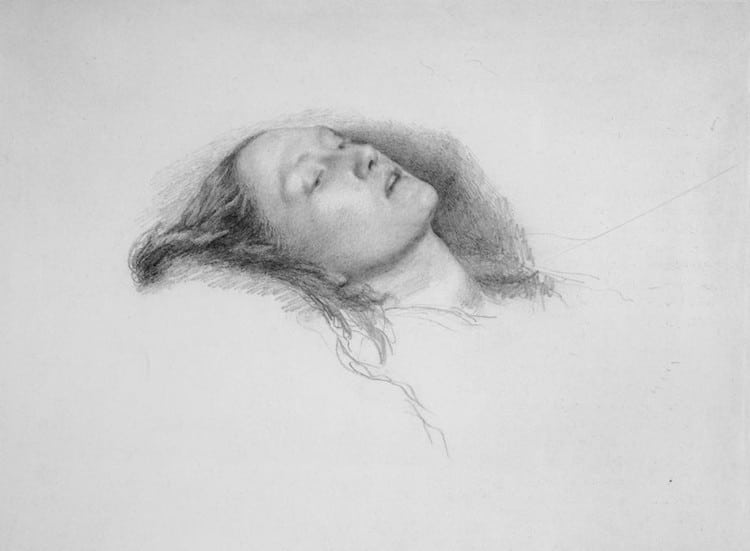 In order to fully capture the spirit of this “muddy death,” Millais opted to paint en plein air (“in the open air”)—a defining Pre-Raphaelite technique. For five months, he set up camp along the banks of the Hogsmill River in Surrey, South East England, and set to work documenting the local plants in a painstaking—and painful—process.

“My martyrdom is more trying than any I have hitherto experienced,” he lamented. “The flies of Surrey are more muscular, and have a still greater propensity for probing human flesh . . . I am threatened with a notice to appear before a magistrate for trespassing in a field and destroying the hay. . . am also in danger of being blown by the wind into the water, and becoming intimate with the feelings of Ophelia when that Lady sank to muddy death, together with the (less likely) total disappearance, through the voracity of the flies.”

Elizabeth Siddal, Millais' nineteen-year-old model, did not have it any easier. An artist and a favorite muse among Millais and his fellow Pre-Raphaelites (including her future husband, Dante Gabriel Rossetti), Siddal was familiar with the process of sitting for paintings. Playing the part of a drowning Ophelia, however, proved to be a particularly challenging task. Clad in what Millais enthusiastically described as a “really splendid lady's ancient dress—all flowered over in silver embroidery,” Siddal posed in a bath full of water. During one sitting, the oil lamps responsible for keeping the water warm went out, and Siddal grew severely ill as a result. (Millais famously paid her medical bills at her father's demand.)

Following this less than ideal creative process (“Certainly the painting of a picture under such circumstances would be a greater punishment to a murderer than hanging,” Millais remarked), Ophelia was completed in 1852 and exhibited at the Royal Academy of Art that same year. 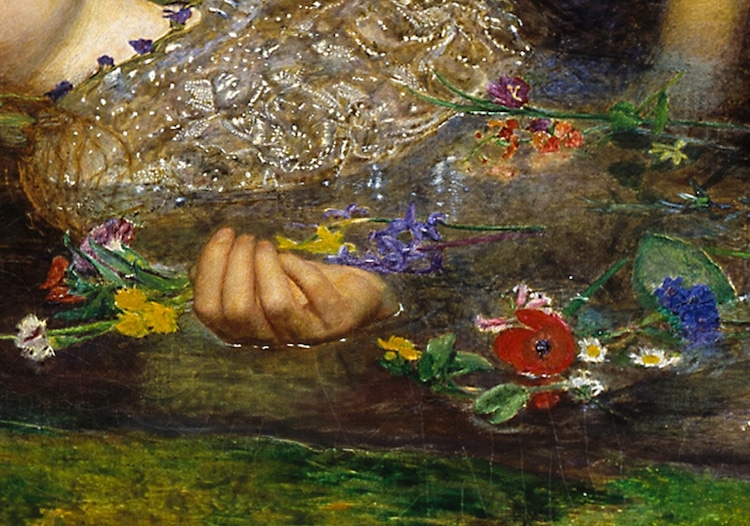 While Ophelia was initially met with mixed reviews (one critic called it a “tour de force of detailed depiction,” while another deemed it “perverse”), it has since come to signify the pinnacle of Pre-Raphaelite painting. In addition to capturing the movement's emphasis on naturalism, the painting also epitomizes floriography, or the “language of flowers.”

Delicately rendered in a range of jewel tones, Ophelia's floating flora is among the painting's most celebrate motifs. These detailed botanicals, however, are more than meets the eye, as each one serves as a symbol. Some of the plants featured in the painting are mentioned by Shakespeare, who famously assigned meanings to flowers; others were thoughtfully added by Millais, who had cultivated an interest in the “language of flowers”—a phenomenon in which flora is used to communicate coded messages.

“The roses near Ophelia's cheek and dress, and the field rose on the bank, may allude to her brother Laertes calling her ‘rose of May,'” Tate explains. “The willow, nettle, and daisy are associated with forsaken love, pain, and innocence. Pansies refer to love in vain. Violets, which Ophelia wears in a chain around her neck, stand for faithfulness, chastity, or death of the young, any of which meanings could apply here. The poppy signifies death. Forget-me-nots float in the water.”

Though rooted in ancient times, this principle had become exceptionally popular in Victorian England—and, with Ophelia‘s treasured flowers at the forefront, will undoubtedly continue to blossom for years to come.