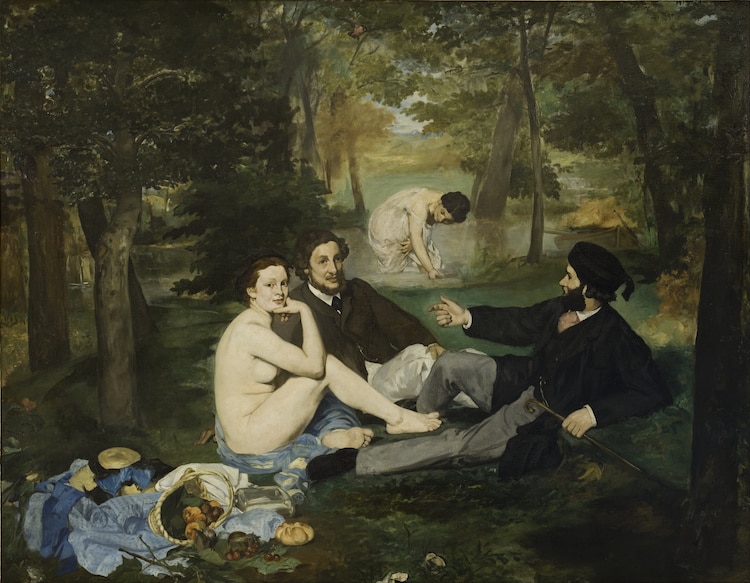 French artist Édouard Manet played a prominent role in the art scene of 19th-century Europe. Working in a unique style, Manet bridged the gap between two major art movements: Realism and Impressionism. One piece that illustrates this distinctive approach is The Luncheon on the Grass (“Le déjeuner sur l'herbe“), a large-scale painting that has become one of Manet's—and modern art‘s—most famous works.

Before we explore the significance of this piece, it's important to understand more about the artist behind it.

Who is Édouard Manet? 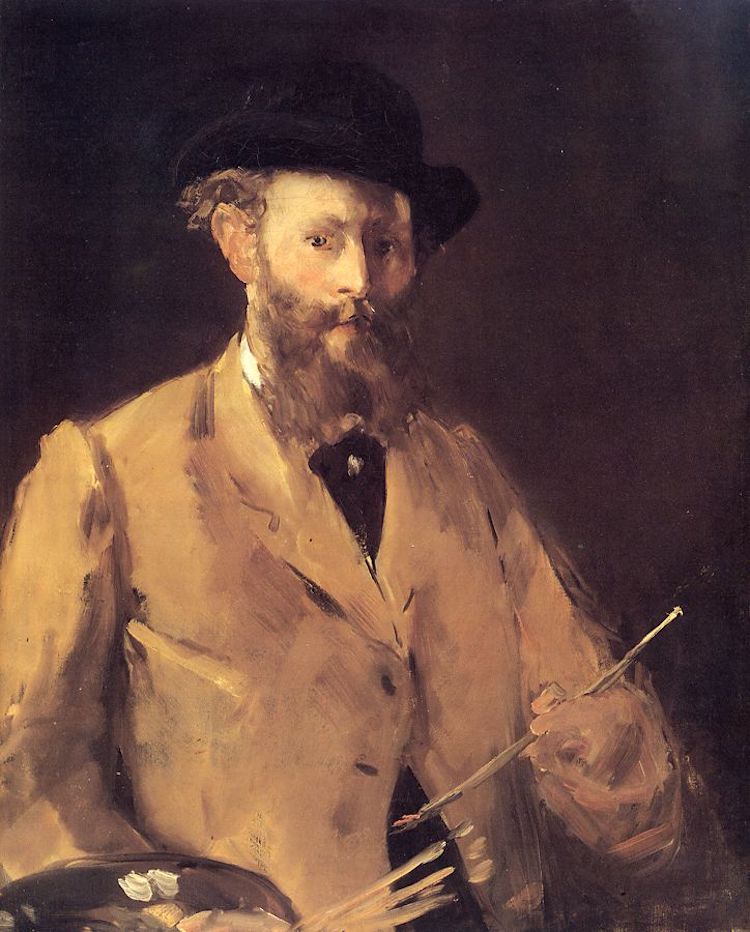 Édouard Manet (1832-1883) was a Paris-born French painter known for his modernist approach to painting. Unlike many of his predecessors, Manet rejected the traditional tastes of the Académie des Beaux-Arts, an organization responsible for France's annual art salons, foregoing allegorical, historical, and mythological scenes in favor of everyday iconography.

Because of his radical selection of subject matter, Manet considered himself a Realist for most of his career. However, after meeting the Impressionist artists in 1868, he became intertwined with the movement, culminating in a one-of-a-kind style that seamlessly blends the dissimilar genres.

Though painted 5 years prior to his first encounter with Impressionism, Manet's large-scale oil painting, The Luncheon on the Grass (1863), captures this distinctive approach to painting.

The Luncheon on The Grass

There are three elements of The Luncheon on the Grass that set it apart from other contemporary paintings: its subject matter, composition, and scale.

Like most Impressionist works, The Luncheon on the Grass features an ordinary situation: two female and two male subjects sharing a picnic—represented as a still life in the lower left corner—in a forest. Though a seemingly mundane scene, it features one particularly peculiar detail: one of the women is nude. 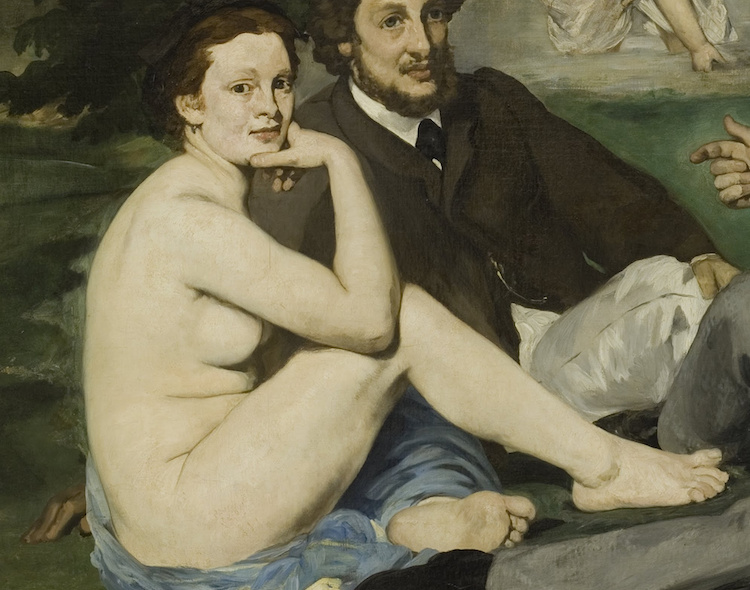 Édouard Manet “The Luncheon on the Grass” (Detail)

While female nudes are prevalent throughout the history of art, they had, up until The Luncheon on the Grass, always represented figures from mythology or allegory. By placing an anonymous unclothed woman in an everyday setting, Manet re-contextualized the age-old subject and redefined what constitutes as fine art—all with a hint of irony.

“So, they'd prefer me to do a nude, would they?” he remarked in a letter to French journalist Antonin Proust in 1862. “Fine I'll do them a nude . . . Then I suppose they'll really tear me to pieces. They'll tell me I'm just copying the Italians now, rather than the Spanish. Ah, well, they can say what they like.”

While Manet did not embrace the classical subjects popular with his peers and precursors, he did take inspiration from them. The composition of The Luncheon on the Grass is directly inspired by two 16th-century Italian works of art: The Pastoral Concert and The Judgment of Paris.

From The Pastoral Concert—a painting that allegorically represents poetry and music—Manet appropriated the dynamic of two clothed males sitting outside with two women: one who is seated and nude, and one who appears to be bathing. Manet is believed to have been inspired to paint The Luncheon on the Grass after viewing this piece in The Louvre, where it remains today. 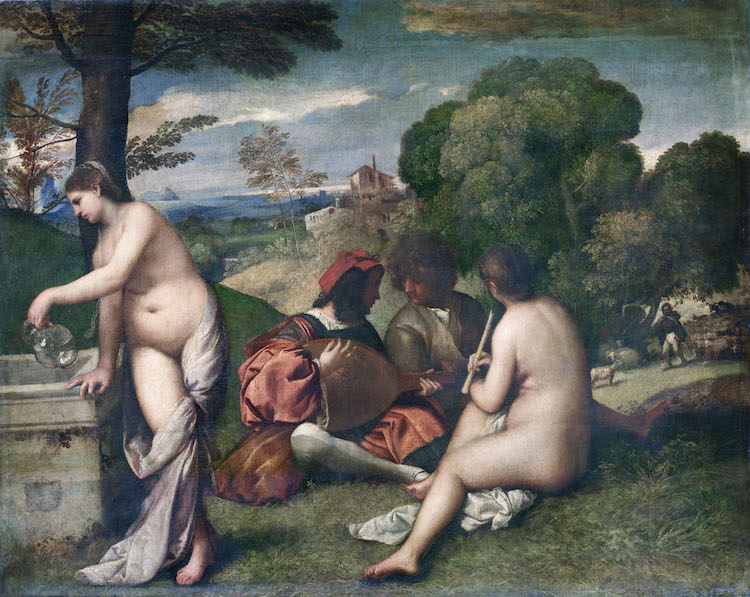 In addition to The Pastoral Concert, The Luncheon on the Grass also references The Judgment of Paris, an engraving depicting a scene from Greek mythology. Specifically, Manet was inspired by the poses and formation of three figures—two river gods and a water nymph—in the lower right-hand corner of the piece. 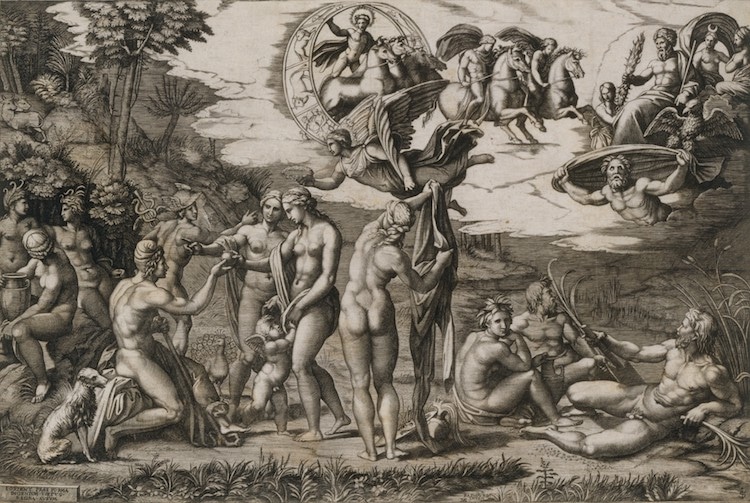 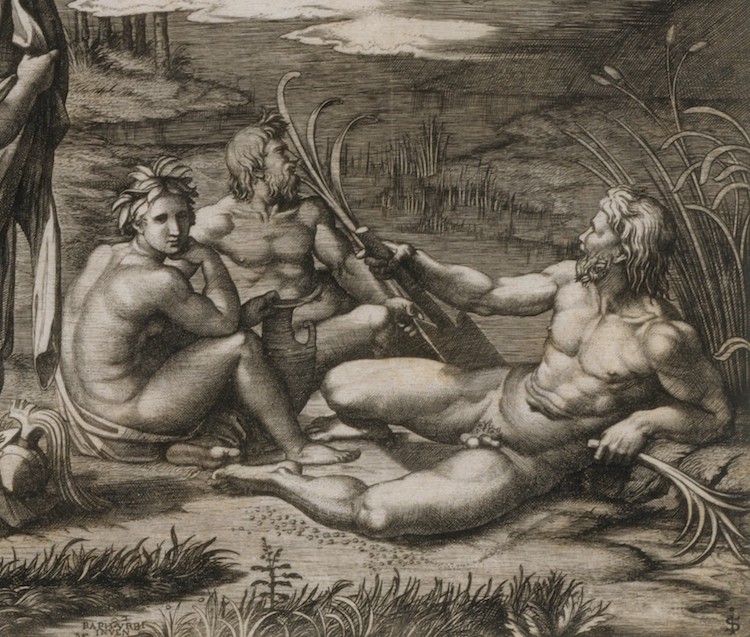 On top of its groundbreaking subject matter and Italian-inspired composition, The Luncheon on the Grass is renowned for its dimensions: 81.9 by 104.1 inches.

Until Manet, artists typically reserved canvases of this size for academic paintings inspired by allegory, history, and mythology. By portraying an ordinary scene on such a large scale, Manet validated the seemingly mundane subjects, inspiring Impressionists like Claude Monet and Auguste Renoir to follow suit with Water Lilies and The Luncheon of the Boating Party, respectively. 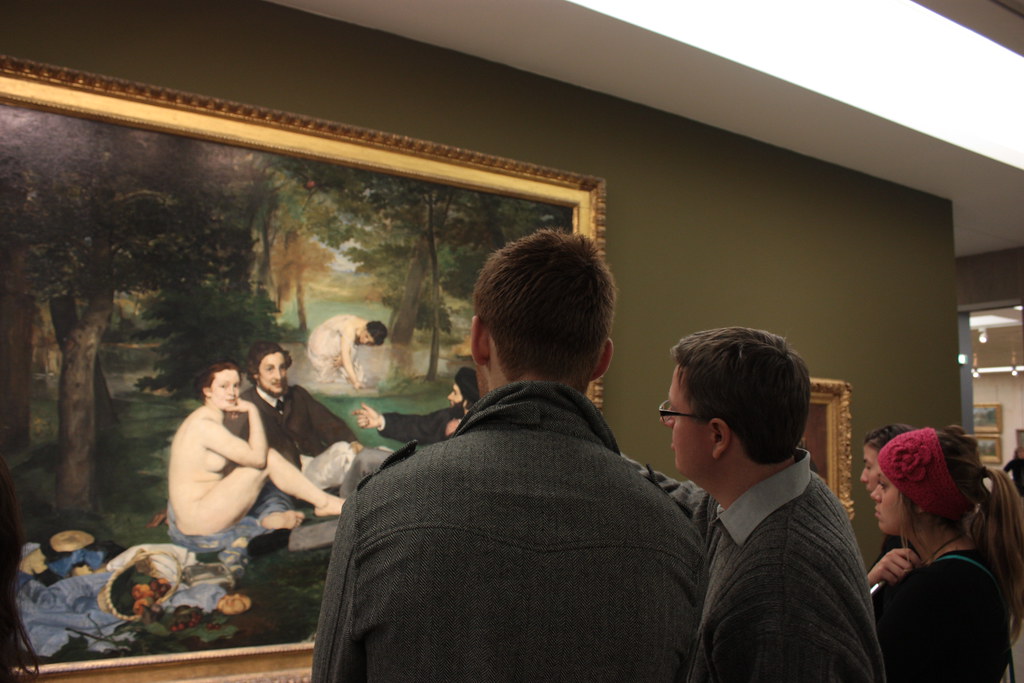 Today, The Luncheon on the Grass remains Manet's most well-known work, and one of Paris' Musée d'Orsay's highlights. Besides its striking visuals, the museum praises the piece for its context, noting its importance to the modern art movement:

“Le déjeuner sur l'herbe—testimony to Manet's refusal to conform to convention and his initiation of a new freedom from traditional subjects and modes of representation—can perhaps be considered as the departure point for modern art.”