Interview: This 14-Year-Old Wildlife Photographer Is Impressing the Pros and Winning Awards 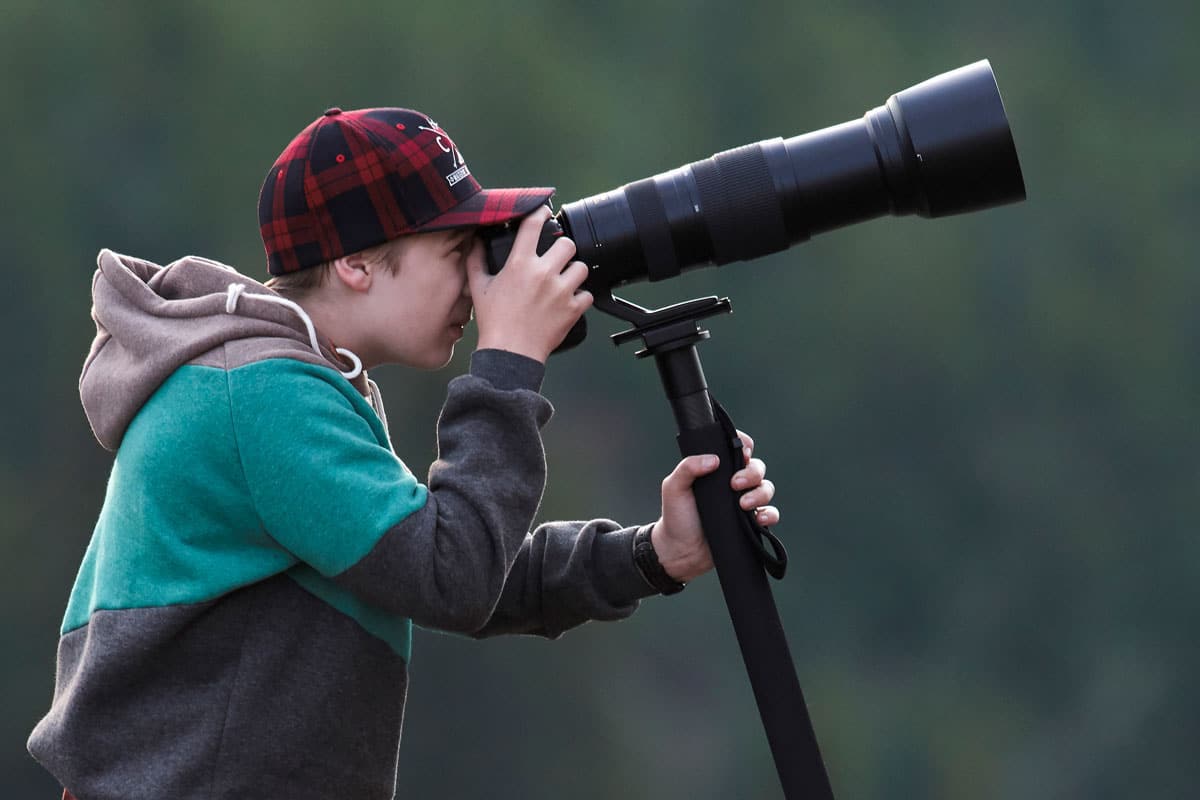 Teenage wildlife photographer Josiah Launstein is continuing to sharpen his skills—and win awards—with his stunning images of animals in the wild. Even in the short time since we first featured his photography, the 14-year-old has added a number of accolades to his name and continues to expand his portfolio. In particular, his reputation as a skilled bird photographer continued to grow, as proven by his recognition in the Young International Bird Photographer of the Year competition for the third time in three years.

The young Canadian photographer is continually on the move, looking for opportunities to get out into the field and capture nature's beauty with his camera. A truly family affair, Launstein's father John and sisters Jenaya and Marlise are also accomplished photographers. Together they spend time in the great outdoors, enjoying the thriving ecosystem found in Alberta, Canada.

When he's not taking photographs, Launstein also spends time at his family's art gallery, where all his relatives are able to display their magnificent work. We had the chance to ask Launstein how he feels about his recent accolades, which also include one of his photographs in a year-long exhibit in the Smithsonian. He also shares some of his newest work and the stories behind these photographs. Scroll down to read My Modern Met’s exclusive conversation with this impressive young man. 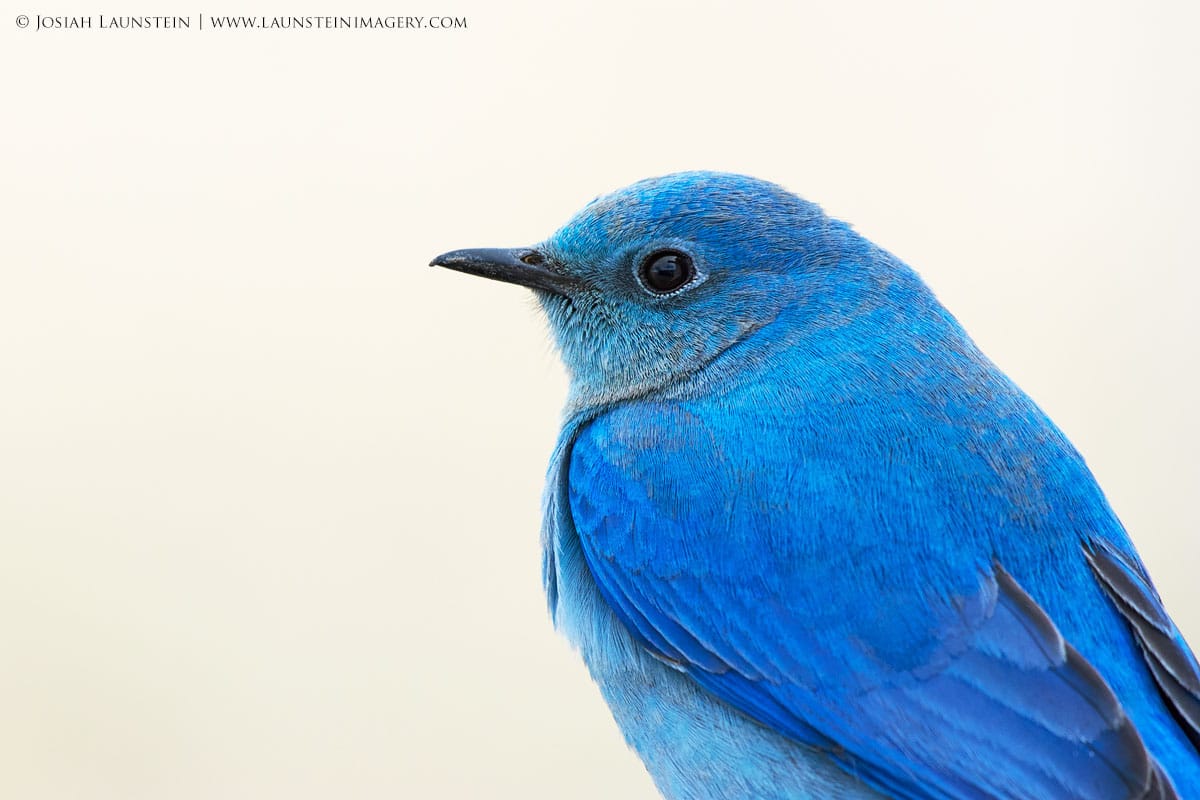 Detail in Blue. “Extreme closeup of a male Mountain Bluebird as it pauses for a moment while out gathering nesting material with its mate.”

How does it feel to continue to have your work recognized at such a young age?

It's an incredible honor whenever one of my images is awarded in competition. The judging panels on the competitions I enter are made up of outstanding photographers, publishers, and conservation leaders, so if something I do catches their eye it really means a lot to me. I'm super excited to have one of my photographs on exhibit in the Smithsonian this year, as that was a goal for me for a few years now. Of course, when I'm in the field I'm just focused on spending time with wildlife and enjoying nature while creating the best imagery I can. Mostly I work at crafting images for print, which means I'm choosing a certain look or composition that tells the story I want to tell. Sometimes when I'm going through my images from a trip with my dad, one or two might stand out and we'll consider submitting them to a competition down the road. 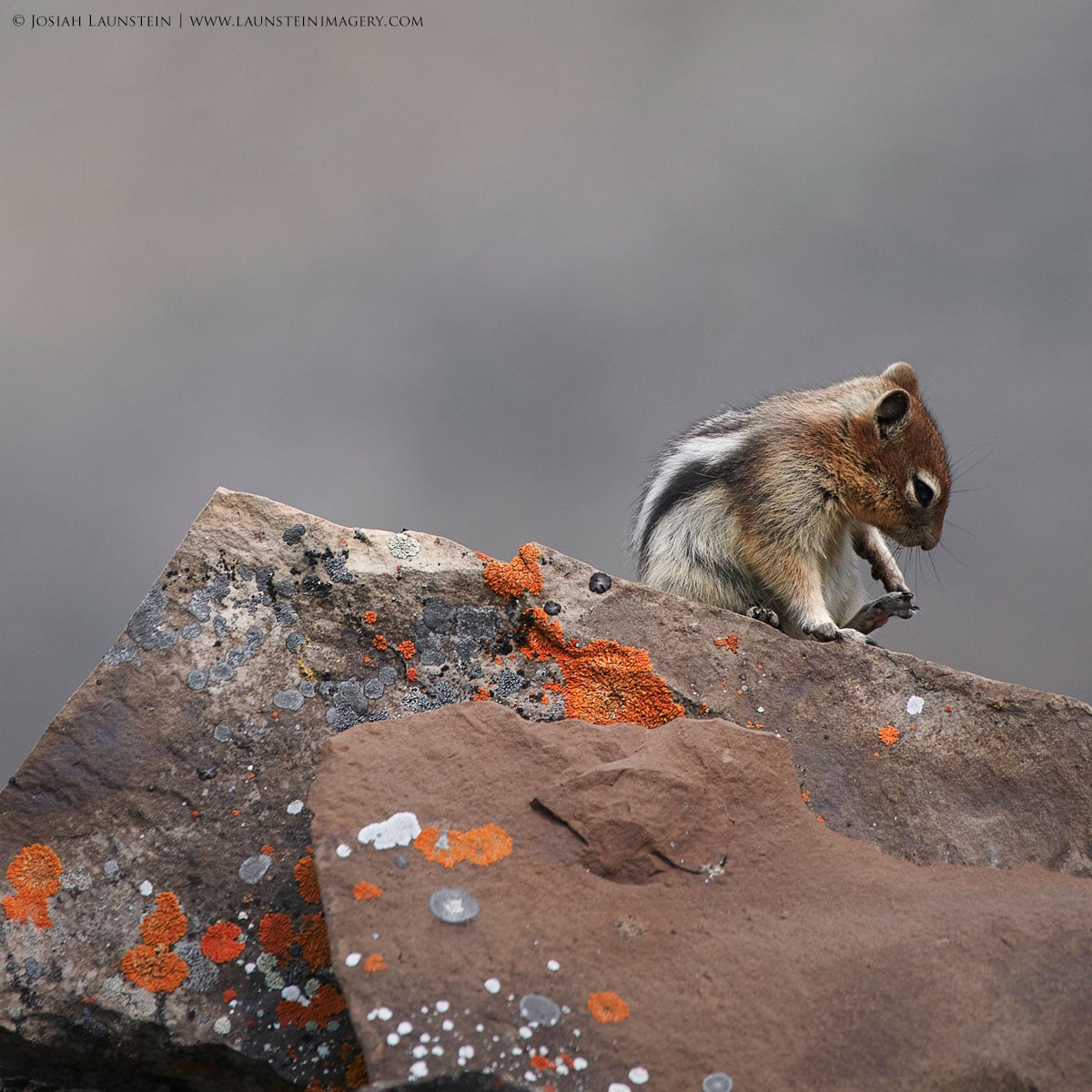 Mountain Yoga. “I was photographing pikas when this adorable juvenile Golden Mantled Ground Squirrel caught my attention. It made its way over to a large boulder and sat down for an afternoon grooming session. After working over its coat for a while, it reached down and touched its toes as if it needed a bit of a stretch after all the hard work. I couldn't believe how adorable it looked and loved all the textures of the rock and lichen.”

How have your skills as a photographer developed or changed over the past year since we last chatted?

That's a tough question because I'm always trying to become a better photographer and student of nature. Looking back, I guess one thing I've really worked on this year has been thinking about how I want the final image or print to look before I even start taking pictures of an animal. In fact, sometimes I'm thinking about it before I even head out because it helps me decide if I want to photograph a certain species in the rain, or at dusk, or try and backlight them in the morning light.

Once I'm in the field I still have to adjust to what's happening, but I'm paying more attention to what angles I photograph from and the settings and composition I choose—being really deliberate in crafting the image I have in mind. My first few years photographing wildlife, I was just excited to see an animal and get a good picture of it. I'm still just as excited to be with wildlife, but I think I'm a lot more intentional now about the art I'm trying to create. 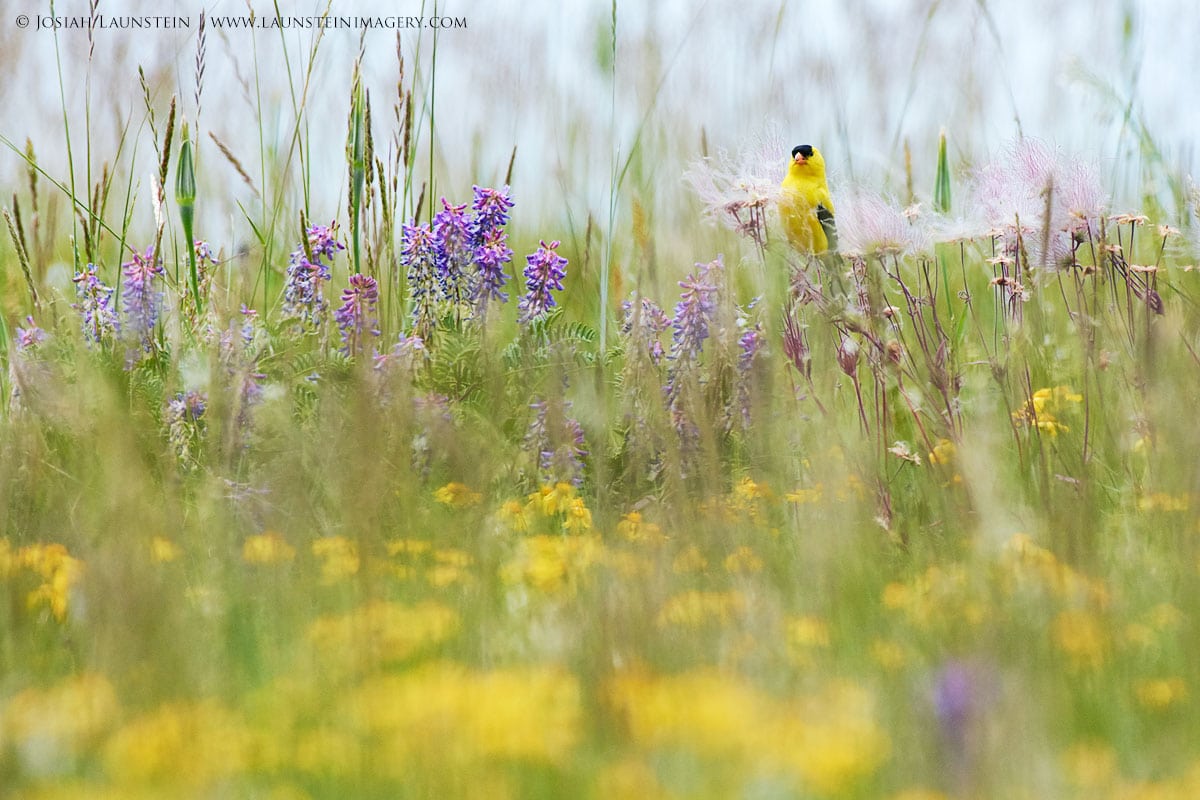 Goldfinch in Flowers. “A male American Goldfinch snacks on a seedhead known in Alberta as Prairie Smoke.”

(continued) Another thing I've noticed is I'm getting better at spotting animals while I'm out. Whether that means tracking down a grouse I heard drumming in the forest, or spotting signs that a bear or ungulate has just moved through the area, or identifying what kind of a bird made that flicker of movement in a tree, I'm working hard at noticing little clues in nature that help me find the animals I want to photograph. 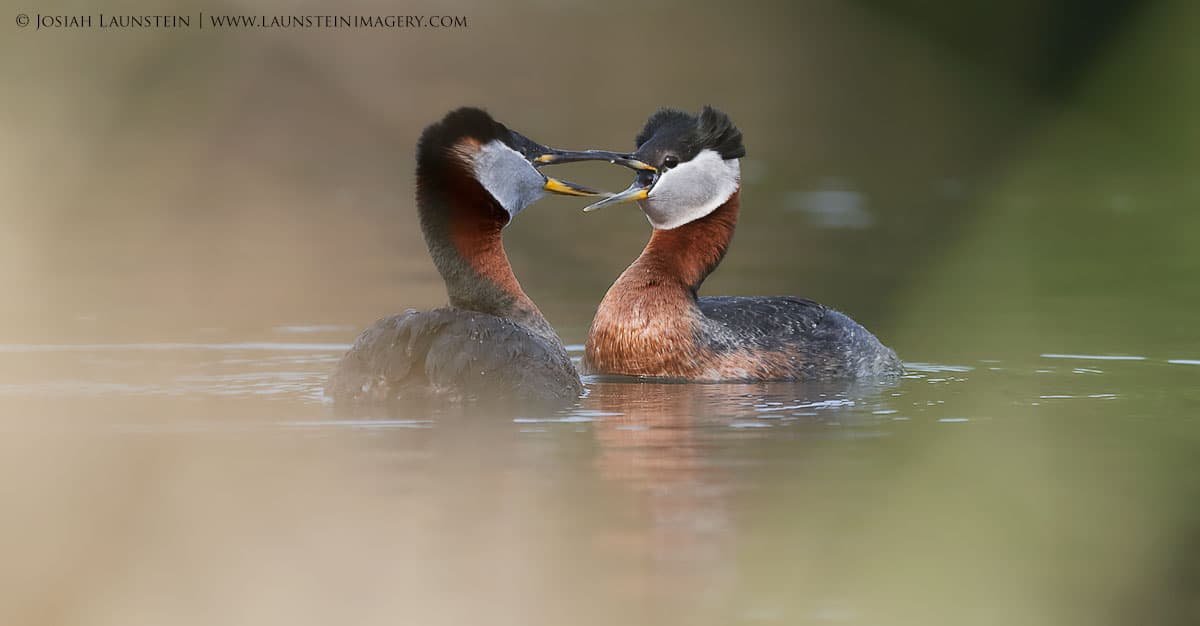 The Ceremony. “A pair of Red-Necked Grebes call out as part of a triumph ceremony after successfully defending their territory from another grebe couple. Photographed through the shoreline grass to create a soft, natural vignette.” 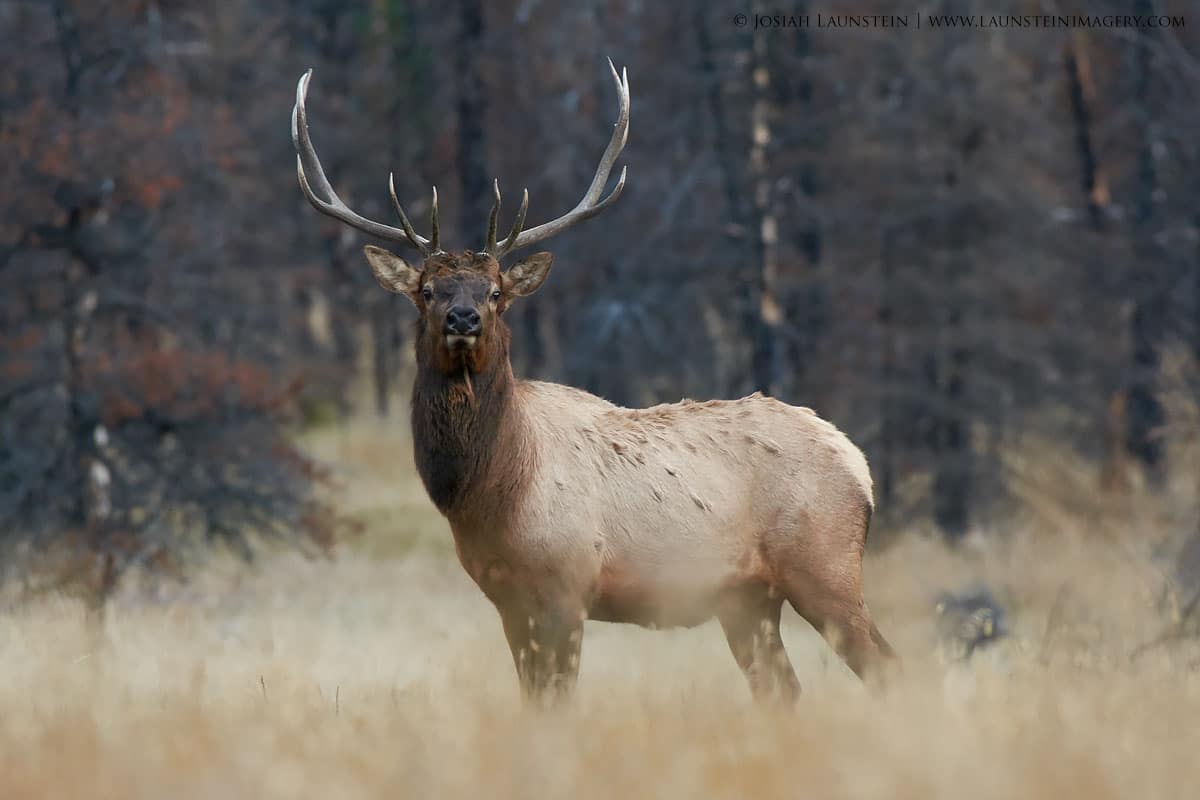 Out from the Timber. “This bull elk was trying to steal some females away from the much larger herd bull during the annual rut when it noticed my dad and sister and I photographing it and stopped for a moment to check us out. I really liked all the brown tones in the image as he posed in front of a burned section of the forest.”

You have a long career ahead of you, but for now: what’s next?

We're just entering the best time of the year to find and photograph a lot of my favorite animals in the Rockies, so I'll be out with my lenses in search of pikas, marmots, bears, hummingbirds, waterfowl, owls, and other critters for most of June and July. By August I start looking for bull moose, and then we're into the elk and deer ruts and my favorite, the bighorn rut. I'm also spending more time at the Wildlife Art Gallery my family operates in the Crowsnest Pass, and I really enjoy talking with collectors and guests that come in and want to hear the stories behind our print releases.

This fall my dad and sister and I are speaking at a wildlife photography convention in Ontario, so I'm excited to share some of the things I've learned about photography and animals with other photographers and to get to photograph with them in a new part of the country for me. I hope to have more opportunities to share my photography and stories from the field in the future.

I hope I continue to grow in my photography this year and throughout my career. I really want to create images that help people connect with the animals I'm photographing and see them in a new way.

14-year-old Josiah Launstein is already an acclaimed wildlife photographer who loves capturing animals from his native Canada in nature. 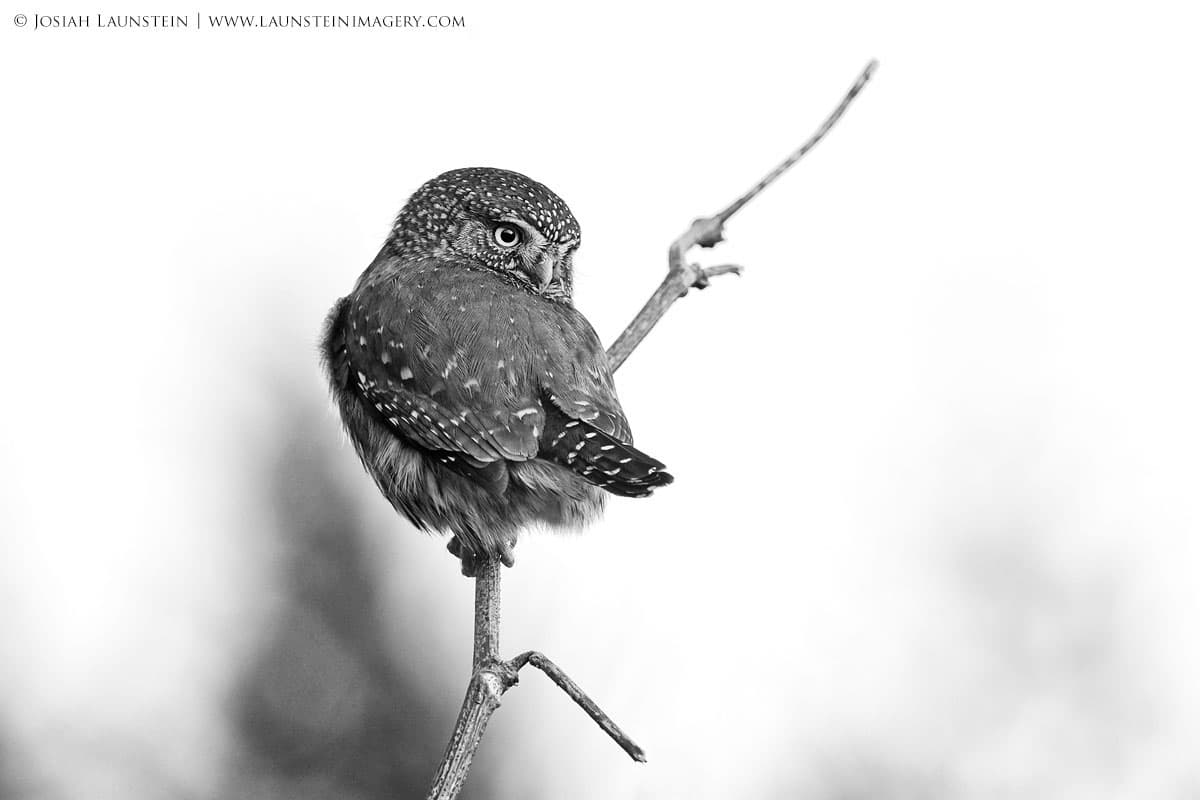 Searching. “A male Northern Pygmy Owl rotates his head to get a closer look at movement that caught his eye. These fierce little hunters are the smallest owls in North America. Photographed in the Faser Valley, British Columbia, Canada.” 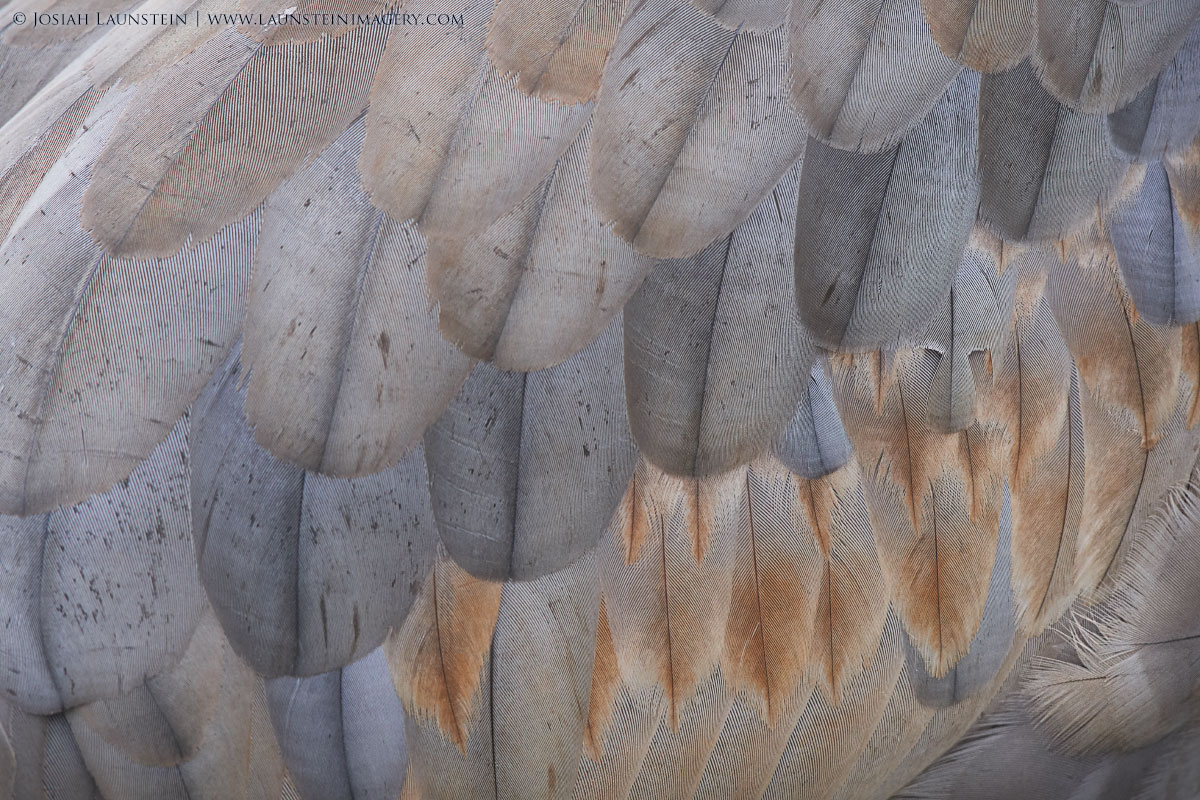 Showing the Mileage. “This close-up study of the wing of a Sandhill Crane hints at the rigors of their incredible annual migration, sometimes reaching many thousands of kilometers each spring and fall.” 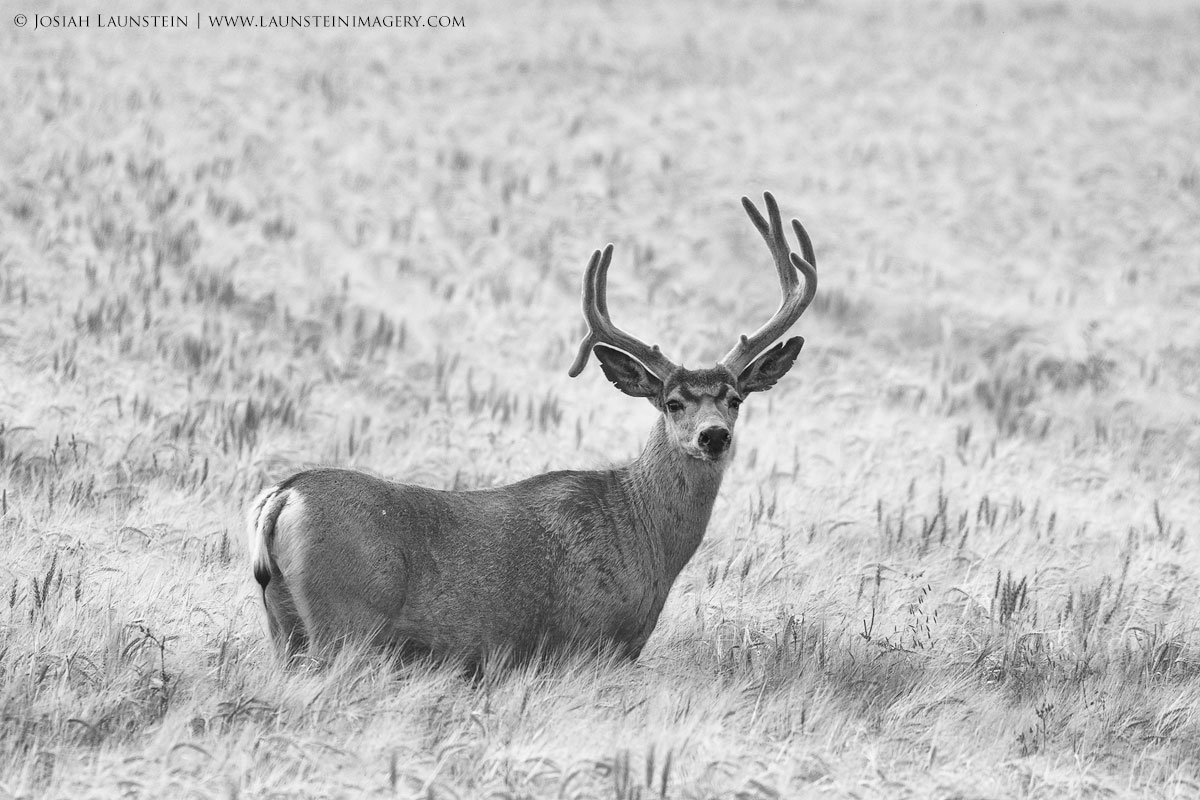 Tattered and Torn. “I found this handsome Mule Deer buck making his way through a farmer's field just a few kilometers from my home. I love photographing members of the deer family when their antlers are in velvet, and almost always try to backlight them if possible to help highlight the beautiful soft textures of their antlers. Our region was blanketed by thick smoke from wildfires this summer, and it helped diffuse the evening light even more, and open the shadows in the farmer's crop to add even more texture to the scene. “ 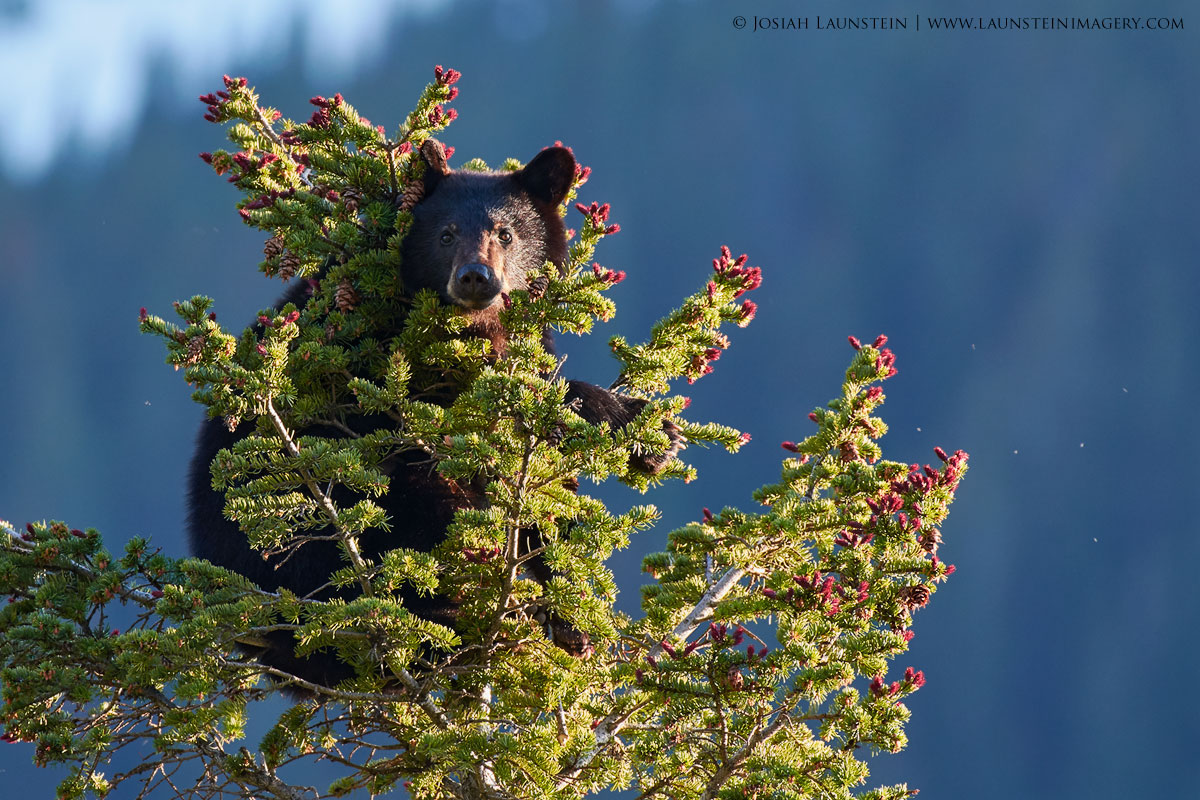 Waiting. “A second-year Black Bear Cub hangs out high in a treetop after it climbed to safety upon encountering an aggressive male bear. The cub's mother is below, protecting the bottom of the tree to ensure the boar doesn't attack her young. She fought the male twice while my dad, sister and I photographed the encounter. The cub started off very alert and alarmed, but eventually got increasingly bored and even napped for a while a couple of times! This is a sad picture for me because the tree this bear is perched in, along with the entire forest around him including the mountainside in the background, was destroyed by a devastating wildfire just 3-1/2 months after this picture was taken.”

Keeping Watch. “I found this young Rufous Hummingbird vigilantly protecting its territory against other intruding hummingbirds. He would puff himself up to look big whenever another hummingbird was near and occasionally flare his tail or dart out and chase them off. I'd always have to guess where he might perch and only had a few seconds to get my shots, but once I noticed him choose this tiny branch a few times, I set up my camera to frame him amongst all the spruce needles of his forest home.
My dad and I noticed that he had been banded, but unfortunately we never were able to identify the complete number on the band to try and learn where he was from and see if he was reported later during his amazing migration south from the Canadian Rockies.” 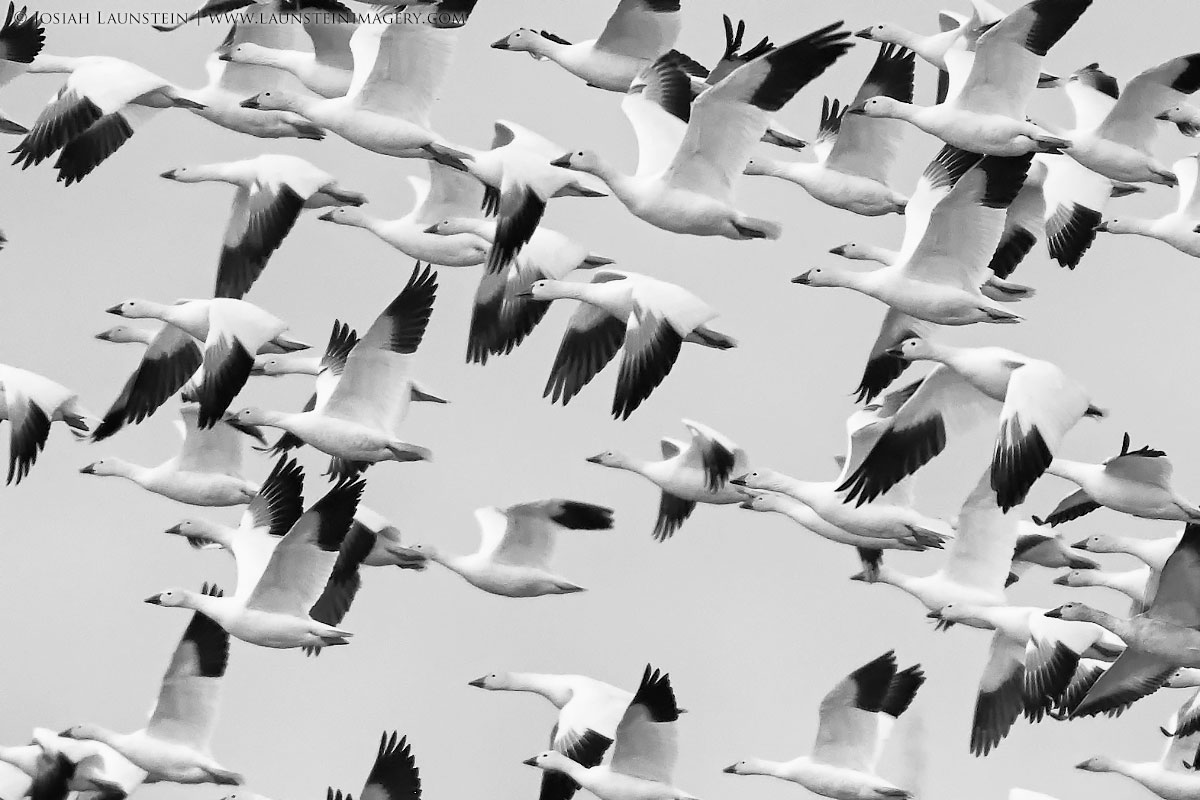 Black and White. “A large flock of Snow Geese lift off from a frozen lake in southern Alberta on their way to their breeding grounds in the Canadian Arctic.”

Drifting Through. “A Snowy Owl stands atop a small rise searching for signs of mouse or vole on a windy, wintery day in the Canadian Prairies.”

Alignment. “A pair of young Red Fox kits explore the world outside their den, their faces aligning for just a moment to appear as one.” 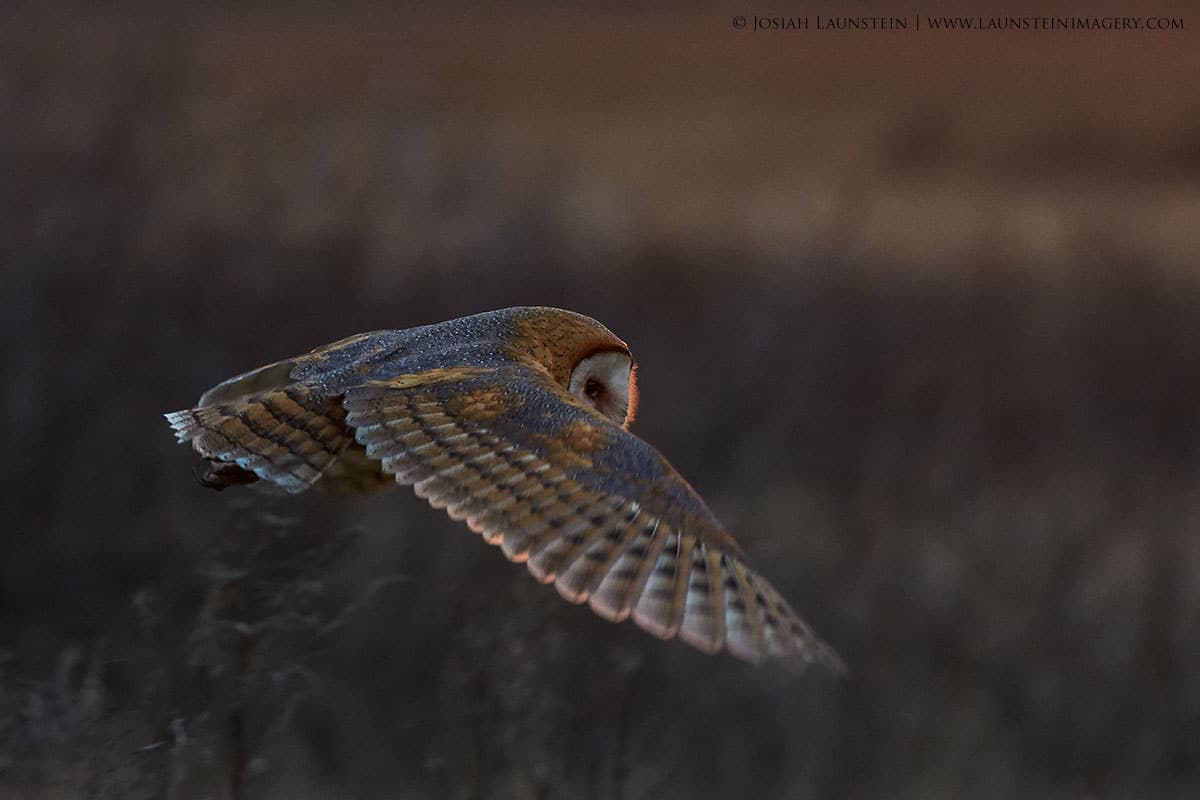 Hunting the Dusk. “A Barn Owl hunts silently as the sunset fades on the West Coast of British Columbia.” 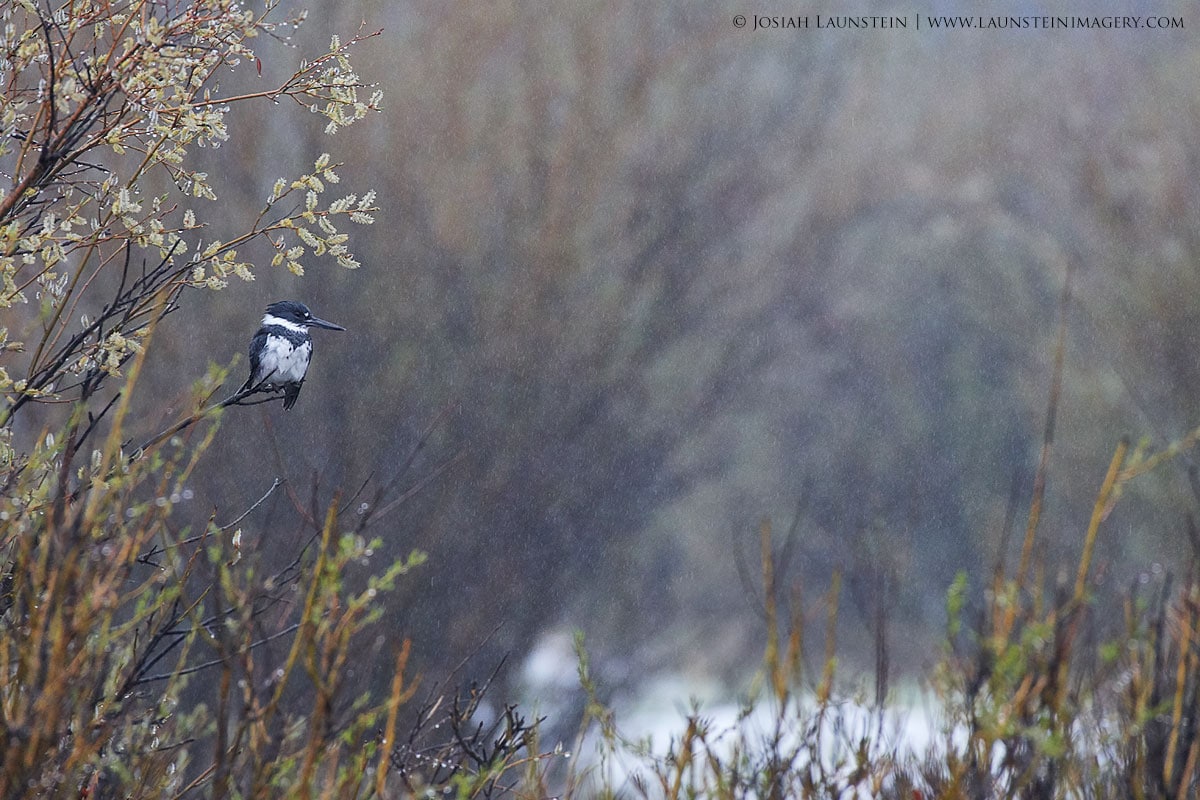 Fishin' in the Rain. “A male Belted Kingfisher watches for signs of movement in the water while getting pretty soaked himself on a rainy spring day below the Rocky Mountains.”

Teen Photographer Whisks Us Away Into a Surreal Dream

Impressed by his skills? Share
Like My Modern Met on Facebook
Get Our Weekly Newsletter
Become a
My Modern Met Member
As a member, you'll join us in our effort to support the arts.
Become a Member
Explore member benefits