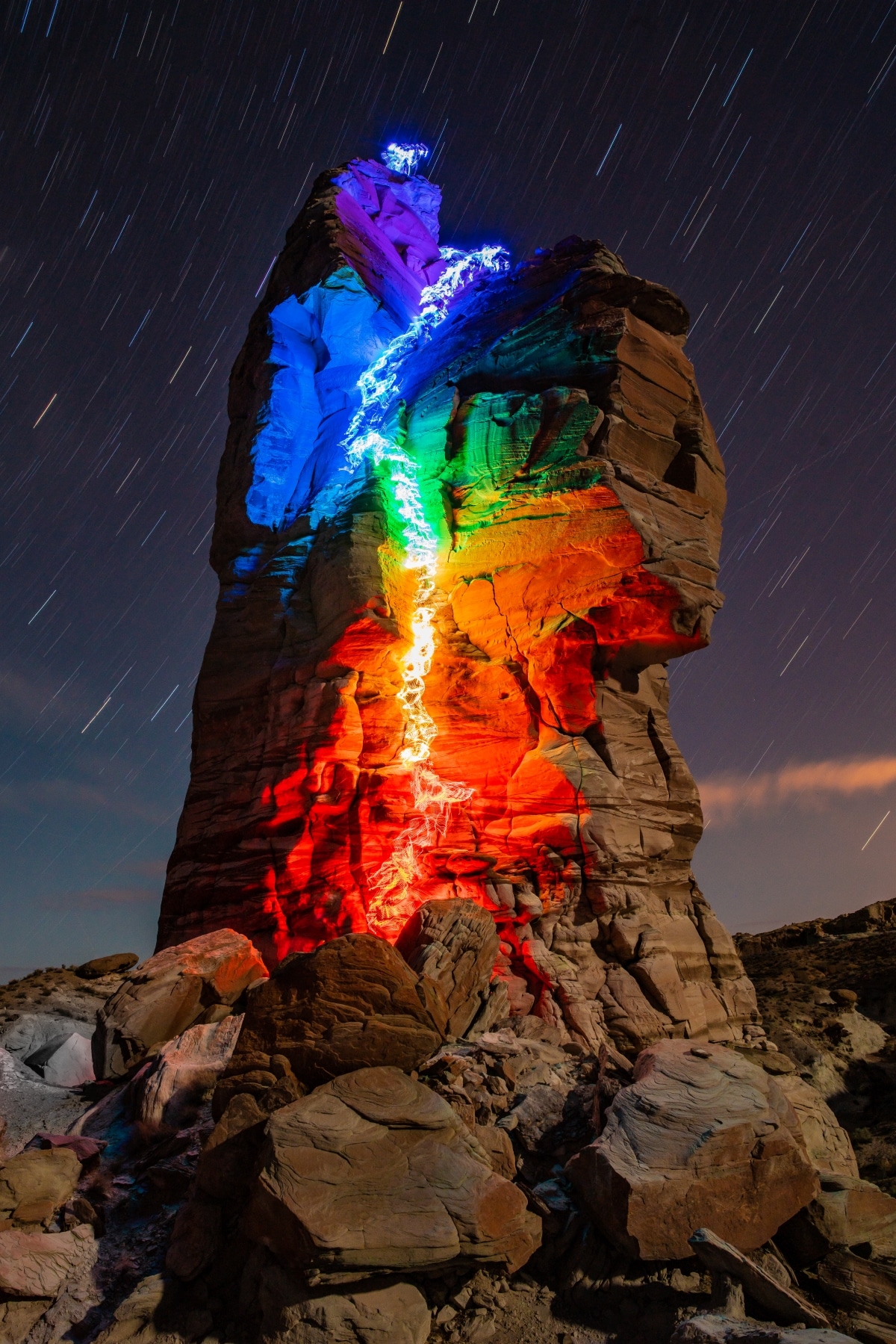 Luke Rasmussen, aka PhLuke Photos, has two passions: climbing and photography. Although he initially kept them separate, he has since combined the two fields in one spectacular way. Rasmussen produces long exposure images that highlight the beauty of natural landscapes as well as the grace and precision it takes to rock climb.

Describing his photography as showing “the motion of the climb,” Rasmussen’s individual movements are displayed through colorful, intricate courses of light that traverse the pockmarked surfaces of massive rocks located on the outskirts of Las Vegas. To make this possible, he climbs with an LED light strapped to his body. The geometric patterns that are produced are an unconventional self-portrait of Rasmussen and part of his larger attempt to capture time frozen in a single moment.

My Modern Met spoke with Rasmussen about how he started climbing and the logistics behind these spectacular images. Scroll down for our exclusive interview.

Luke Rasmussen creates long exposure rock climbing photos where he charts his path with rainbows. Read our interview with him, below. 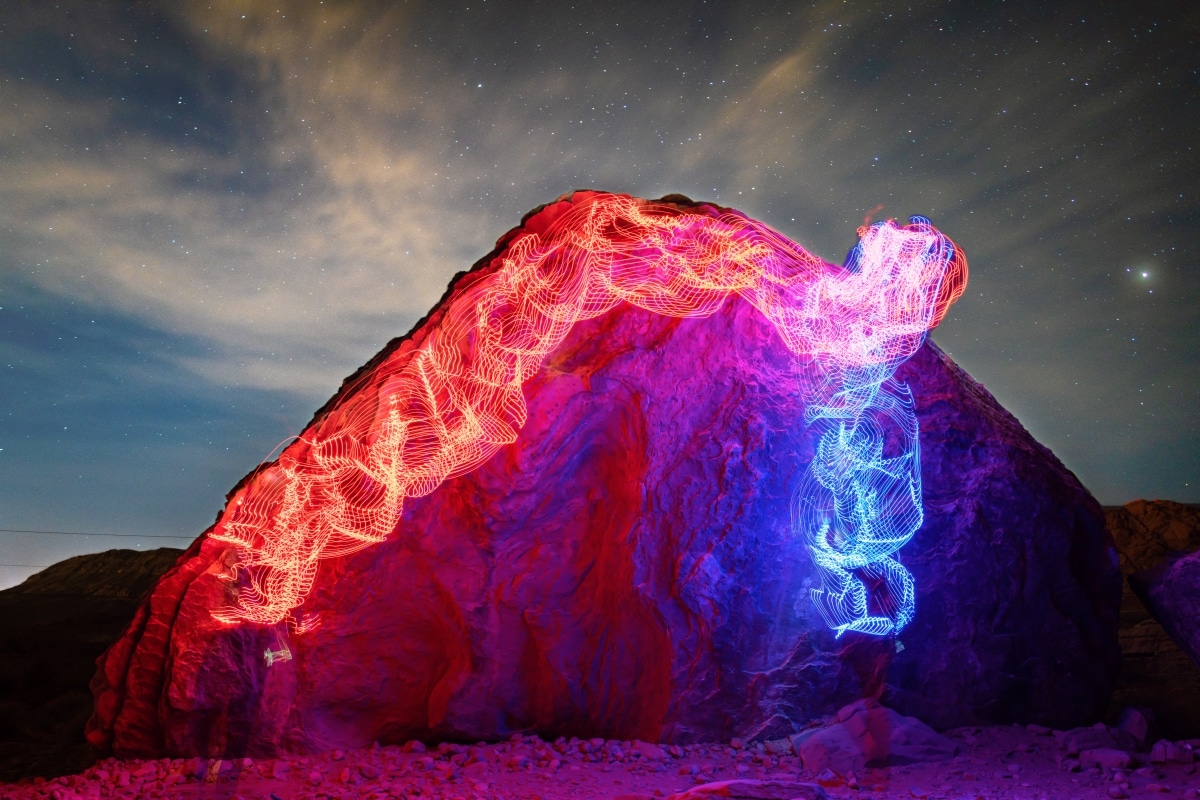 How did you get into rock climbing?

I count myself incredibly fortunate to have grown up in the mountains of Colorado. As a kid, I got to try pretty much every mountain sport: climbing, skiing, rafting, mountain biking, and fly fishing. Climbing is the one that stuck. I was always a terrible climber as a young kid. I wasn't at all the kid that you would see climbing around on the jungle gym or climbing up trees. I was the nerdy kid with glasses standing on the ground and watching in awe as my friends clambered up on to their second-story deck or chimneyed up a stairwell. I guess that's probably why I fell so in love with climbing. I was bad at it. It looked so easy when others did it, yet I couldn't get off the ground. And once I did get off the ground for the first time (on a portable wall at a Cinco De Mayo festival while still wearing my soccer cleats), I was hooked.

My father pulled his old climbing gear out of the closet, dusted it off, and called up some buddies who still climbed. I started going climbing outside and learning all the techniques and tricks. As I did, I got better. Something that once seemed impossible was now not only possible but easy. This thing that I had built up in my head as something that I couldn't do became something that I could do. 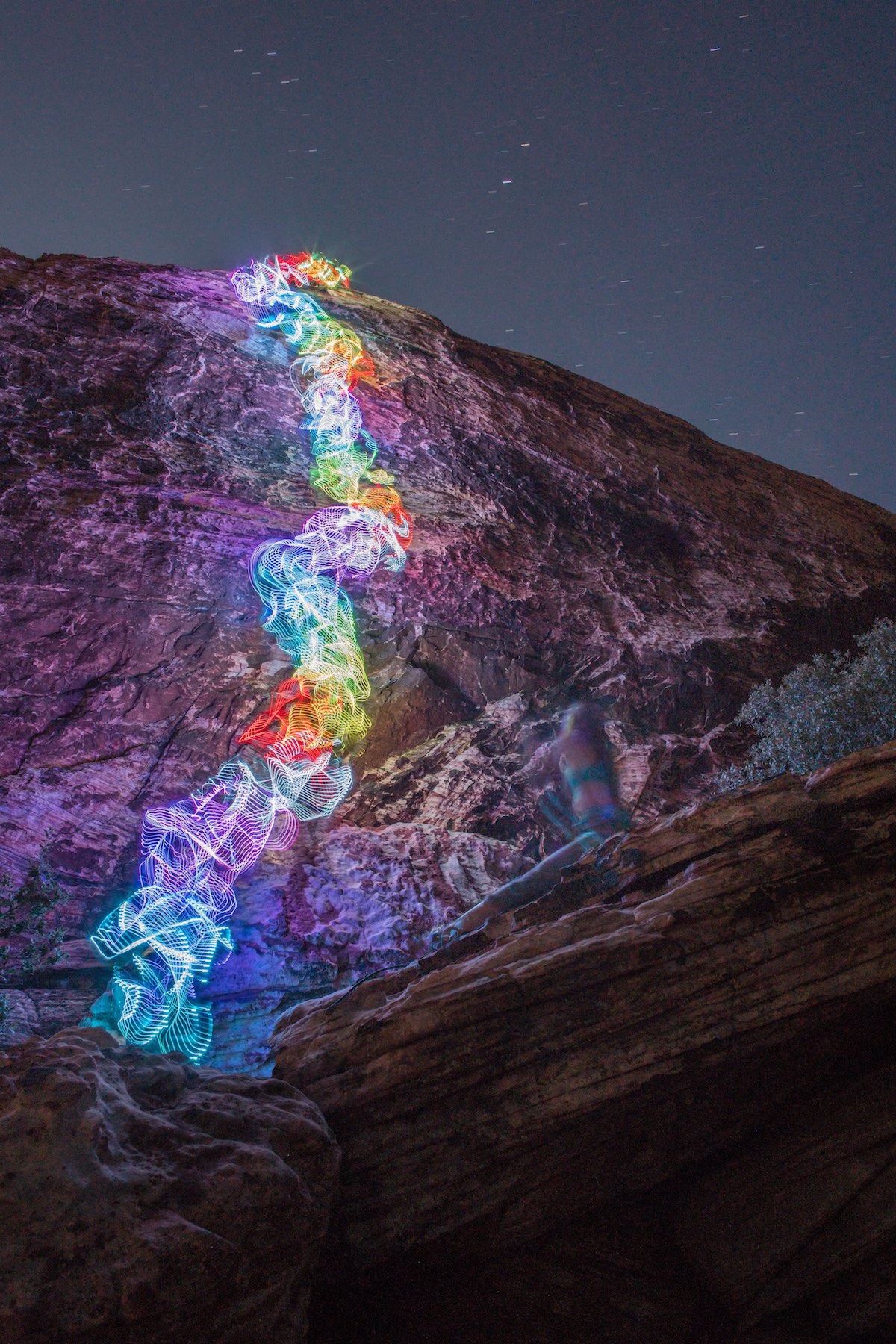 A Light in Every Man Small

What has kept you interested in rock climbing and honing your skills?

This process has repeated itself over and over again for the last 16 years. It has repeated itself in the form of rock climbs that when first tried felt like even hanging on would be impossible. It has repeated itself in the form of climbing areas that seemed too adventurous, too tall, too intimidating. I have done those rock climbs. I have been to those areas. I have held on to holds so small that the untrained eye wouldn't even recognize them as holds. I have reached the top of routes so overhanging that after lowering to the ground I lost my breath hiking back to where I started. I have looked 2,200 feet back down The Painted Wall into the heart of The Black Canyon of the Gunnison where I started climbing 14 hours earlier. I have stood on top of crumbling desert sandstone towers looking out over endless vistas of rock. I have taken the difficult and made it feel easy. 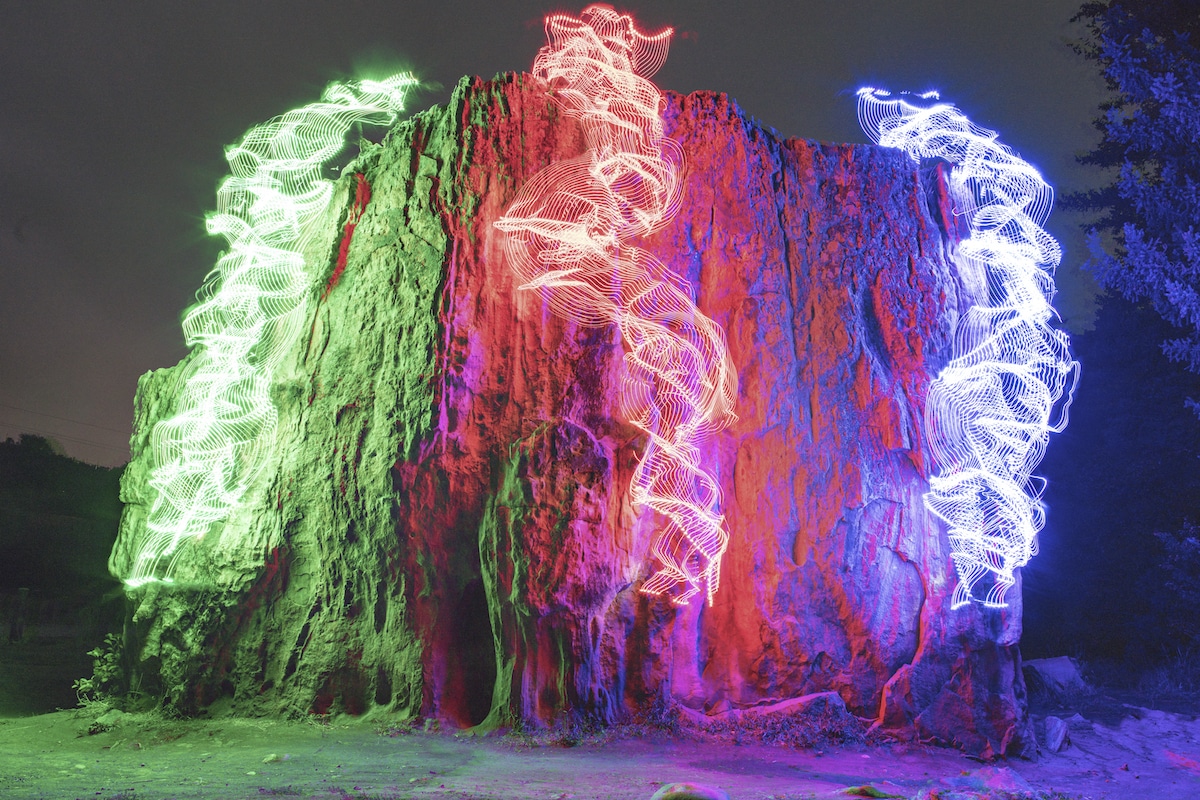 It's incredible to read about the connection you made when you were 11—about the flagpole and its scraped metal—and see your current body of work. What is it about a moment frozen in time fascinates you?

My photography is an attempt to capture time frozen in a moment rather than a moment frozen in time. Traditionally, that's what we talk about in photography, right? Freezing a moment in time. As we're experiencing time, it is flying past us, one moment followed by the next and by the next and by the next. It moves so fast that we can't even comprehend what is happening. Photography allows us to freeze time so that we can study just the moment. The photo is a snapshot of the moment. But, what it's not is a snapshot of time. Time is that stacking up of moments, the aggregate of every moment past, present, and future. Traditional photography does not allow us to capture that. My photography is an attempt to do so. It is an attempt, in some small way, to capture the passage of time and freeze it in a single moment.

Because we can only experience time moment by moment, part by part, it makes it difficult to study it as a whole. But, of course, it's not impossible. There are monuments to the passage of time all around us: from the flagpole at my elementary school where I noticed the wear caused by the metal clasp swinging at the end of the halyard, to the colossal cliffs carved out by the roaring of the Gunnison River through The Black Canyon, to the eroded spires of sandstone standing proud of the surrounding cliffs. These monuments fascinate me. They give me a chance to ponder the passage of time as it is presented before me in a single moment, a single image.

In the same way, I became fascinated by long exposure photography. Here was a technique that allowed me to see an image of the passage of time: stars moving through the sky, cars passing by, water coursing over falls. I wanted to find a way to connect this to my own passion for rock climbing. The experience of climbing is rooted in a flowing state, moving from one hold to the next, fluidly connecting the natural features in a rock face. In order to study this flow, I wanted to be able to visualize it in a single image. I wanted to freeze time in a moment.

Next: Learn more about how Rasmussen creates his photographs.

Page 1/2
Amazed by these photos? Share
Like My Modern Met on Facebook
Get Our Weekly Newsletter
Become a
My Modern Met Member
As a member, you'll join us in our effort to support the arts.
Become a Member
Explore member benefits