After we first featured Jamie Beck and Kevin Burg's stunning cinematic gifs (or Cinemagraphs), we knew we had to continually follow-up with this creative team to see where they were taking their ideas next. In July, we caught up with them as they told the story of Dogfish brewery's strawberry beer, providing some mesmerizing images while giving us rare, behind-the-scenes look at brewing specialty beer.

Today we present you with some new images from their recent trip to Disney World including one that's not published anywhere else (Monorail). While we've all seen tons of gifs before, what sets these Cinemagraphs apart is their subtle yet extremely well-executed way they make images appear dynamic. What better way way to show you this than with their incredibly magical Disney World gifs.

“The Disney World series is about exploring themes of fun and innocence around a thing that many people have emotional attachments to,” Kevin Burg tells us. “Like many people, we have very fond childhood memories of the Disney parks so to capture some of our favorite rides in a new medium by revisiting as adults was beyond fun. In daily life it's easy to take your work very seriously when you're shooting on a set in the real world with real expectations, but the uniquely heightened environment Disney World creates really does engulf your senses in a purely enjoyable way. Running around Fantasy Land giddy about the footage you just got was a wonderful departure from normal life.”

When asked what the most enjoyable part of the project was, Kevin said that it was “knowing that our emotional response to being there could be expressed to people when they see the Cinemagraphs.”

Of course, as fun as creating works like this may be, it comes with its own set of challenges. Like almost all great moments in life, everything doesn't always go as planned.

“We set out to capture as much as we could which meant bringing the camera on to many rides,” Kevin says. “We planned a first person perspective shot of riding Splash Mountain so we got ponchos, got in the front seat and planned it all out. Jamie was shooting and would wrap the camera up in the poncho at the last moment before we hit the bottom of the big drop to protect it from the water gushes and wetness. I was so preoccupied with protecting the camera that on the drop my poncho hood flew off and I got a face blast of water and was completely soaked. Jamie and the camera were dry as a bone. And we didn't get the shot.”

Now here's ones where they did.

“The Big Thunder Mountain Railroad Cinemagraph is from a vantage point you get while waiting in line – seeing other people riding before you becomes an important part of the experience. By the time you get to ride you can't help but have a big dumb grin on your face. We wanted to take people there and bring people back if they haven't been to a Disney park in a while.”

“When you walk by Splash Mountain and see people flying down the big drop you get excited in anticipation for your own ride. We lived that as we shot it.” 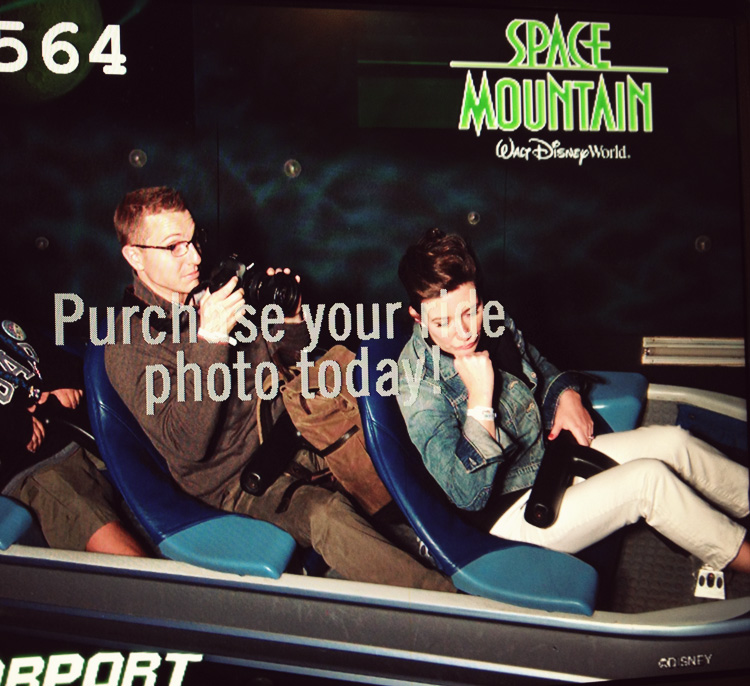 The team in action. “After filming on rides we'd always laugh at the post-ride photos where we have our serious work faces on.”

Thanks for sharing your new Cinemagraphs and stories with us, Jamie and Kevin. Keep up the great work!