Known as the “grandmother of performance art,” Marina Abramović is a living legend with a career that spans more than 60 years. When she first emerged in the early '70s, she changed the perception of performance art and invited people to question what is considered art. The Serbian American artist thinks of the human body as the “point of departure for any spiritual development.” Through her controversial experiments, she often endures dangerous and intense physical ordeals in order to explore a number of different themes, including the mind, human culture, purity, and control.

Scroll down to explore some of the most impactful performances of this pioneering master performance artist.

Discover 6 Marina Abramović performances that continue to fascinate the world.

Arguably the most important performance of her career, Rhythm 0 gave Abramović celebrity status in the art world. The performance took place in Naples in 1994. Abramović stood in a room with 72 objects on a table and a description reading, “I am the object,” and, “During this period I take full responsibility.” She invited spectators to use any of the objects on her body in any way they desired, completely giving up control. These included harmless items such a rose, feather, perfume, honey, and grapes, as well as harmful utensils such as scissors, a scalpel, nails, a metal bar, and a gun loaded with one bullet. The performance lasted 6 hours, during which the audience members grew disturbingly more and more aggressive. Abramović described it: “What I learned was that…if you leave it up to the audience, they can kill you.”

Rhythm 0 is part of the Rhythm series, where Abramović confronted physical pain in a number of different performances. 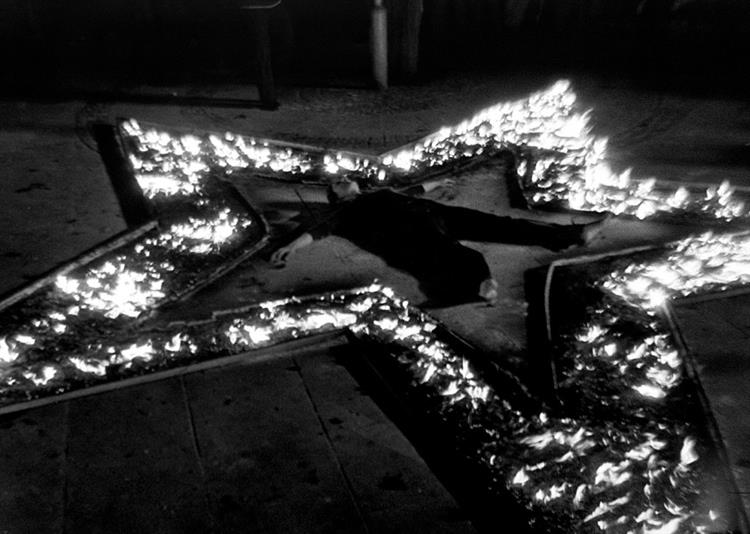 One of the first profound performances of Abramović’s career, Rhythm 5 explores the physical and mental limits of the human body. The artist risked her own life for her art in an extreme performance where she almost suffocated. For Rhythm 5, Abramović used a large petroleum-drenched star, which the artist lit on fire. After cutting her own nails and hair and dropping them into the fire, she laid down within the burning star. The dangerous performance only ended once audience members decided to pull her out to safety.

“Lying down, I fail to notice that the flames have used up all the oxygen,” the artist recalls. “I lose consciousness. The viewers do not notice, because I am supine. When a flame touches my leg and I still show no reaction, two viewers come into the star and carry me out.”

Abramović met Ulay (Frank Uwe Laysiepen) in Amsterdam in 1975, and the legendary couple lived together for 12 years. They made pioneering work as a duo, where they explored their love for one another and the division between mind and body.

For Rest Energy in 1980, Abramović and Ulay stood in a gallery, facing each other while using a bow and arrow held by the weight of their own bodies. While Abramovic pulled back on the bow, Ulay held the arrow, pointed directly at her heart. The piece was an exploration of tension, balance, and trust. Rest Energy only lasted four minutes and 10 seconds long, but it was an intense performance that revealed the fragility of life.

Abramović and Ulay’s relationship deteriorated, and in 1988—after several years of conflict—they marked the end of their relationship with a spiritual journey by walking across the Great Wall of China. Their original plan was to meet in the middle and get married there, but it didn’t turn out that way. During the eight years of planning the performance, they grew further apart, but they didn’t want to cancel the monumental journey.

They both started at opposite ends and walked 5,995 kilometers (3,725 miles) towards each other. They finally met on June 17, 1988–90 days after they started—and said goodbye. Both traveled with translators; and while Abramović barely spoke to hers, Ulay became close to his. When the artists met, he had a confession to make. “He told me his translator was pregnant with his child,” Abramović reveals. “He asked me what to do. I told him he should marry her.” The couple didn’t speak for 20 years, but were reunited in 2010 when Ulay surprised Abramović by turning up to her 2010 performance, The Artist Is Present.

Challenging, endurance works have long been a significant aspect of Abramović's career, and The House with the Ocean View is no exception. For this piece, the artist spent 12 days in the Sean Kelly Gallery in New York, contained within three “rooms” built six feet off the ground. She didn’t eat, write, or speak during the entire time. Instead, she only slept, drank water, urinated, showered, and looked out at the viewers each day. She could walk between each room, but the stairs leading down from them had rungs made of butcher knives.

“The idea of the work was an experiment,” reveals Abramović. “If I purify myself without eating for 12 days, any kind of food, just drinking pure water, and being in the present moment, here and now, in the three units on the wall, which represent my house, like the bathroom, the living room, and sleeping room, where the ladder coming down to the space are made from the knives, so you never can leave.” She continues, “That kind of rigorous way of living and purification would do something to change the environment and to change the attitude of people coming to see me. If they will just come and stay and forget about the time.” 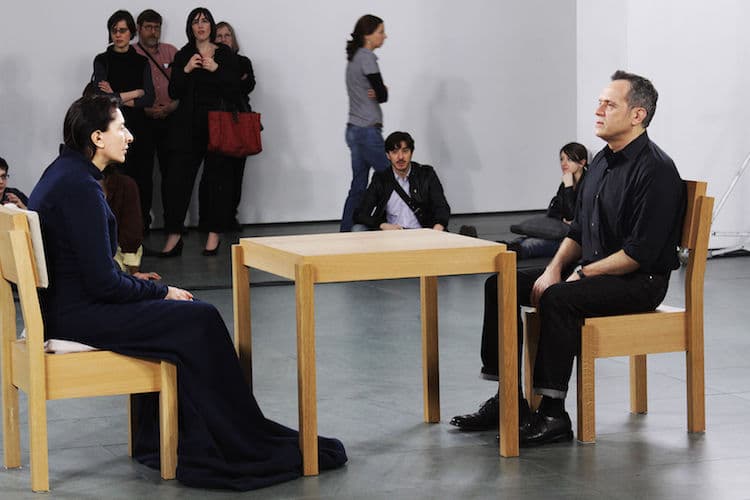 Photo: Marina Abramovic performing “Artist is Present” at the MoMA in May 2010. Wikimedia Commons [CC BY-SA 3.0]

Perhaps her most famous work, The Artist Is Present explores human endurance and emotion. The powerful performance took place in the Museum of Modern Art in New York over a period of two and a half months. Abramović sat at a table every single day, inviting viewers to take the opposite chair and engage in a silent conversation in front of a live audience. As Abramović stared into the eyes of each participant, they experienced a range of reactions. According to Abramović, the intention of the piece is to demonstrate “this enormous need of humans to actually have contact.”

The highlight of the piece was when Ulay arrived unexpectedly to take part in the performance. He sat opposite Abramović and waited for her to open her eyes. When they looked at each other, Abramović appeared shocked at first and then smiled. Her eyes filled with tears as he shook his head, clearly both communicating intense emotion without a single word. At the end of their brief encounter, Abramović extended her hands across the table towards Ulay, who held them and leaned forward to say a few private words. The audience broke out into applause, then Ulay left and another viewer arrived. Abramović is captured taking a few deep breaths in order to recompose herself and carry on with the performance.

Performance Art Reveals the Passage of Time and Past Identity