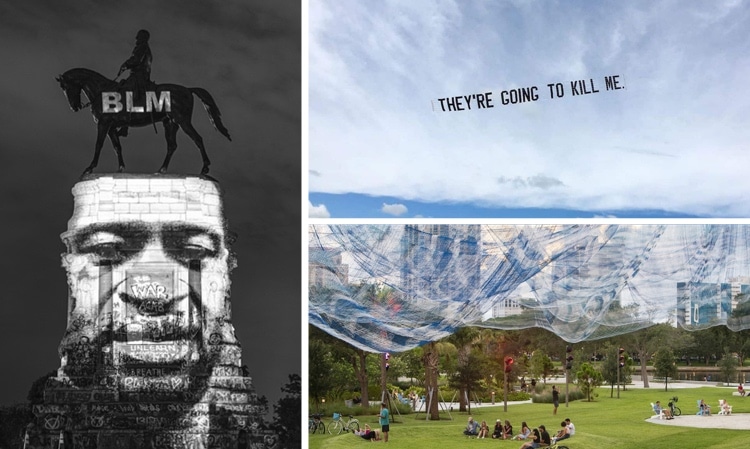 To say that 2020 was a year like no other is an understatement. World events, from the COVID-19 pandemic to the Black Lives Matter protests, shaped the way we lived. And, as a consequence, they also shaped the way we saw and consumed art. With many museums and galleries closed for extended periods, artists were more resourceful than ever in getting their messages across. This was particularly true of installation artists.

Many artists chose to focus their practice around what was happening in the world, and this often meant striking out on their own. From Dustin Klein‘s spontaneous light projections on the Robert E. Lee Monument to Jammie Holmes‘ powerful airplane banners with the last words of George Floyd, artists were not afraid to use their art to highlight social issues. Some, like flower designer Lewis Miller, even used their skills to give thanks to the brave healthcare workers putting their lives on the line during the pandemic.

And while much art was centered around world events, there were also other incredible art installations that managed to come to life, giving people a break from the divisive and depressing realities of the world. From interactive sculptures in the desert to underwater sculptures in the Great Barrier Reef, these installations reflect the incredible creativity of today's contemporary artists.

2020 was marked by art installations that commented on extraordinary world events. 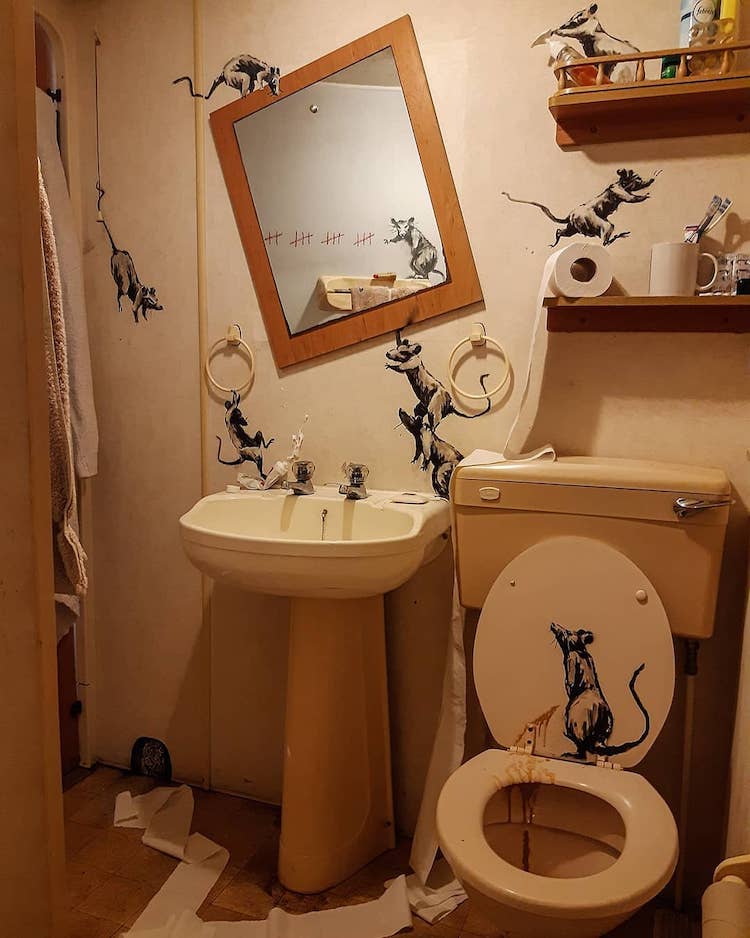 My wife hates it when I work from home by Banksy

Staying at home in lockdown didn't make legendary street artist Banksy any less productive. He managed to find a space right in his own home to create an installation that exemplified how the whole world was going a little stir crazy. In this piece, which he captioned “My wife hates it when I work from home,” his rats run amok and wreak havoc in the bathroom.

From marking off the days in quarantine to using a roll of toilet paper to get a little exercise, these rats were all of us. And in posting this, Banksy once again showed how he's able to use humor and irony to get through a tough situation. This wouldn't be Banksy's only artistic contribution related to COVID-19. He also painted artwork for a local hospital and his rats took over a subway car with a warning to wear your masks and sanitize your hands. 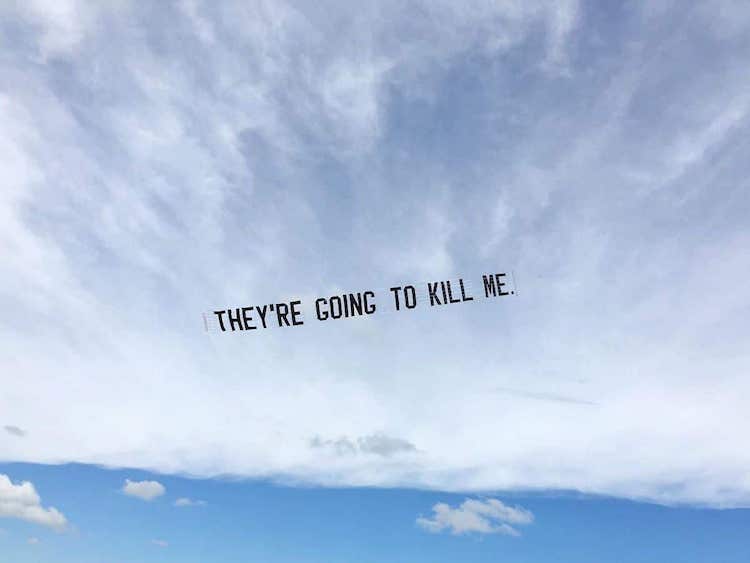 The senseless murder of George Floyd at the hands of Minneapolis police officers sparked outrage across the globe. Many artists used their craft to ensure that what happened to Floyd would not be forgotten, including Jammie Holmes. The artist organized airplanes to fly across five major U.S. cities carrying banners with Floyd's last words. The results are an in your face, undeniable look at the pain one man suffered that had rippling effects felt by millions. In reflecting his words to the public, Holmes forced us to think about what we can do to ensure this does not keep happening.

“I hope that people will be reminded of the power we can have to be heard and that coming together behind a unified message is key for real change,” Holmes said. “Like countless silenced and fearful young Black men, I have been the victim of police misconduct on a number of occasions in my life. Our mothers are burying us way too early. My fiancée shouldn’t worry every time I’m headed out of the house on my own. Yes, I carry a pistol, Mr. Officer. I carry it to protect myself from you by any means necessary. At some point, you will realize you can’t kill us all.” 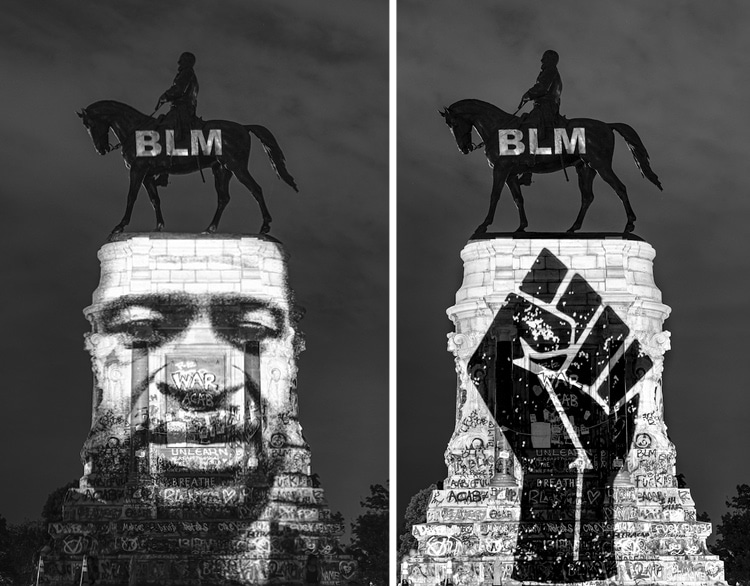 Reclaiming the Monument by Dustin Klein

In the wake of George Floyd and Breonna Taylor's deaths, widespread protests in support of the Black Lives Matter movement happened across America. And in many cities, old Confederate monuments were forcibly removed or ordered taken down by the legislature. In Richmond, Virginia the last remaining of these was the Robert E. Lee Monument. So while the city decided what measures to take, light projection artist Dustin Klein took matters into his own hands.

For several months, Klein projected images of Black victims of police violence on the face of the monument as a way to transform the meaning of the statue. As the faces of these victims took center stage, the public was allowed to use the space to mourn and gather their thoughts. Klein then extended the project to also include the faces of important Black citizens throughout history—such as Frederick Douglass and Harriet Tubman—as a way to acknowledge the great contributions they've made to our country. Klein's project is a reminder that the best art can often come spontaneously from matters that move us. 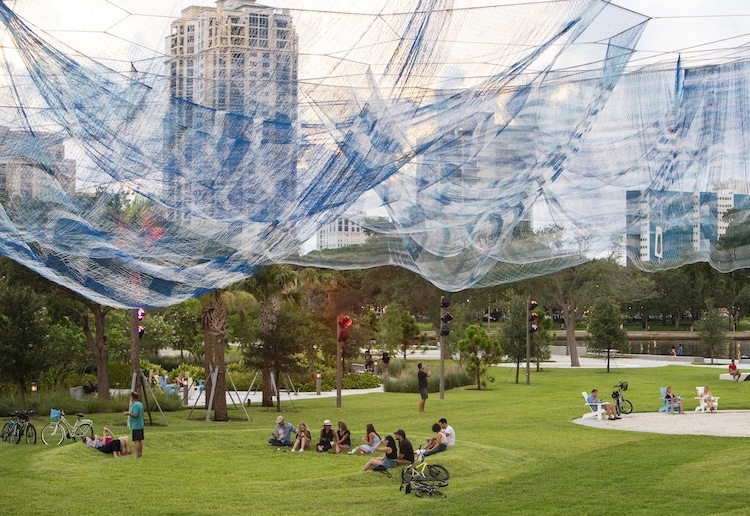 Artist Janet Echelman is known for her large-scale installations using twine. Her work in St. Petersburg, Florida is no exception. Measuring 72 feet tall and spanning 424 feet, Bending Arc is a focal point of the new Pier Park. Flowing and billowing in the wind, the installation is even more magical at night when it's lit up.

While the visual of the installation is impressive on its own, the work took on new meaning for Echelman when she discovered that it is located in an area that was important during the Civil Rights Movement. People gathered here in peaceful protest against the segregation of local municipal pools, which continued locally even after it was deemed unconstitutional. Upon learning this, Echelman decided on the title Bending Arc in a nod to a quote by Dr. Martin Luther King Jr.—”the arc of the moral universe is long, but it bends toward justice.”

Throughout the COVID-19 pandemic, members of the public have been showing their appreciation for front-line healthcare workers. Floral designer Lewis Miller had his own unique way of giving thanks by placing his Flower Flash installations in strategic locations across New York. One stop included New York-Presbyterian Hospital, where roses, lilies, and cherry blossoms were placed in an ornate arrangement.

Though Lewis' team was eventually asked to remove the flowers by hospital security, they made the most of it by handing out the flowers to the nurses, doctors, and healthcare workers who passed by. The positive reaction they had shows that even the most simple gestures can be the most powerful.

There were other installations that don't focus on the pandemic or Black Lives Matter, but they certainly highlight the creativity on display in 2020. 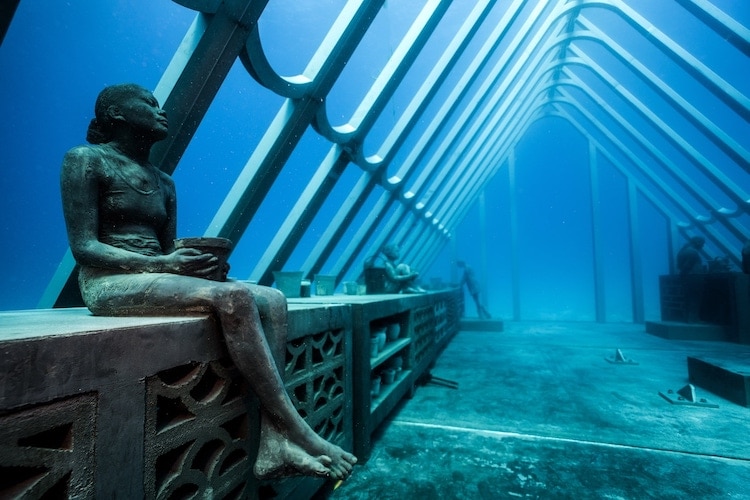 Sculptor Jason deCaires Taylor never disappoints with his underwater sculptures, and his latest installation in Australia's Great Barrier Reef is no exception. After years of planning and installation, Taylor didn't let the pandemic get in his way—he was able to open this new underwater park on schedule. Working with the local community, Taylor conceived the Coral Greenhouse. In this installation, the youth are in charge of running a laboratory to investigate the ocean. And as always, the setup makes a wonderful artificial reef for marine life.

“One of the overriding objectives was that we wanted young people to be inspired by marine science and fascinated by it,” Taylor told My Modern Met. “And want to have an active interest in the health of the reef and to be able to explore it in a fun and dynamic way. One of the big objectives was to create this space encompassing many areas, to be not only a space for art and culture but only about marine science and to use it as a portal or access point to explore the Great Barrier Reef.” 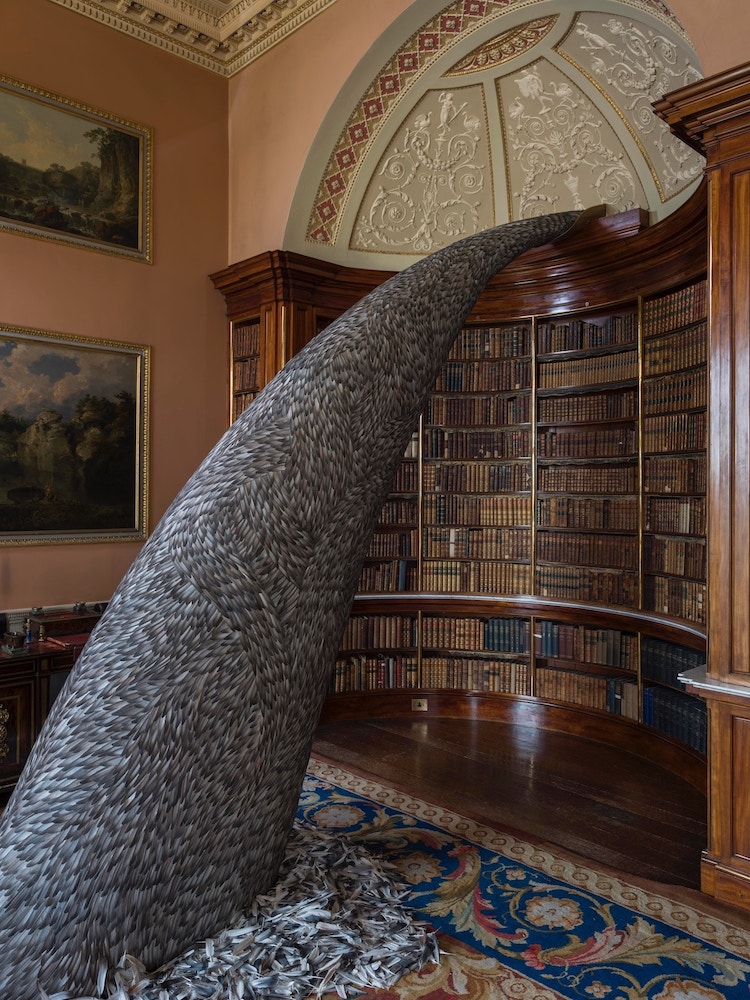 Sculptor Kate MccGwire views the use of repurposed materials as central to her creative practice. Her installation Discharge is an incredible example of how creative reuse can produce striking results. The London-based artist used around 10,000 pigeon feathers to create an explosion trickling from a bookcase.

By carefully sorting the feathers she collected, MccGwire was able to create this dynamic curve filled with abstract shapes. The result is at once mesmerizing and yet could be off-putting for viewers once they realize what the material is. This dual reaction is something the artist looks for, as she attempts to show the public how unexpected materials can be transformed into something aesthetically pleasing and beautiful. 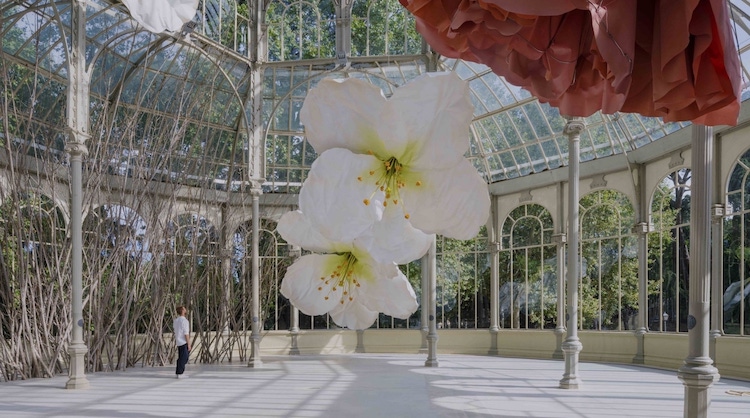 When Madrid's Palacio de Cristal reopened after the initial COVID-19 lockdown, they started with a bang. Kosovar artist Petrir Halilaj put on an incredible display with his installation To a raven and the hurricanes which bring back smells of humans in love from unknown places. Inspired by the mating rituals of bowerbirds, he filled the space with enormous, oversized flowers.

The flowers were made in collaboration with Halilaj's life partner, Álvaro Urbano; and, in fact, the entire piece is meant to be a celebration of love. By declaring their love openly, they are starting a wider dialogue about acceptance and identity. 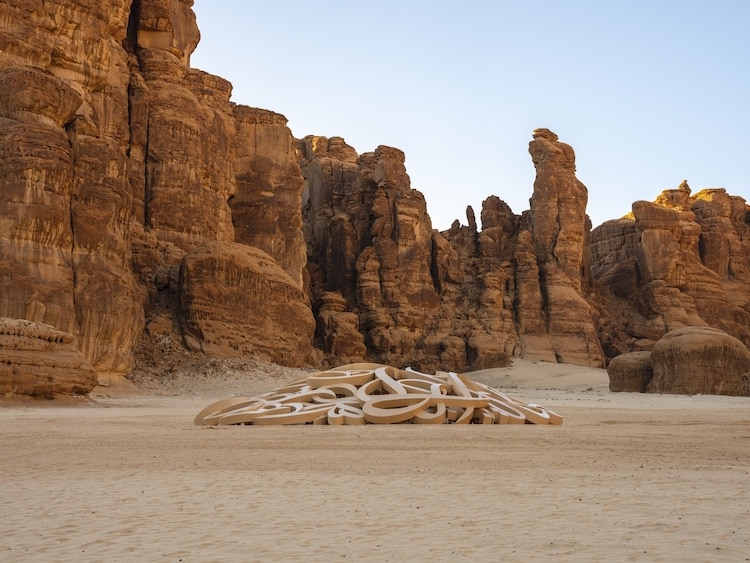 Early in 2020, before most of the world was shut down, 14 artists traveled to the Saudi Arabian desert to create their own art oasis. Desert X AlUla is groundbreaking for Saudi Arabia, with a diverse lineup of young artists that included many women. Each artist was asked to use the desert as their canvas, and they all delivered.

Many created interactive pieces that invited visitors to engage with the art. From installations that visitors could swing on to artificial puddles that were meant to be jumped upon, each artwork is a reflection of its artist. Some, like eL Seed even took direct inspiration from the surroundings. His work Mirage is based on a 7th-century love story from the area.

“When I arrived in AlUla, I realized it would be impossible for me to compete with the environment,” eL Seed shared. “So I decided to create a work that would blend into the desert. Jameel and Butheyna were never able to be together. That’s also a mirage. Love is universal. It unites us all.” 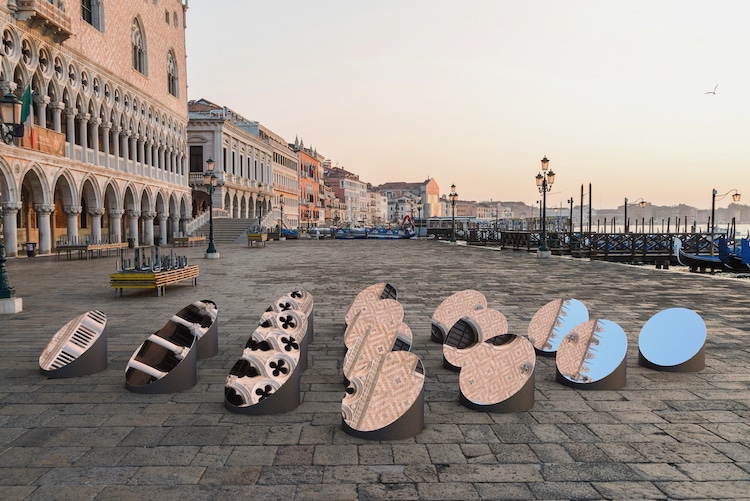 Venice is already beautiful and, by harnessing its beauty, designer Arnaud Lapierre created a memorable installation. Using strategically placed mirrors that rotate, Lapierre's AZIMUT reflects back fragments of the surroundings. Each mirror contains an unexpected detail of Venice's historic architecture, which allows viewers to observe them in a new manner.

Unfortunately, this installation was cut short due to the pandemic, but the power of the piece lives on through photos and videos.

Next: Learn more about installation art and see the best examples since 2013.