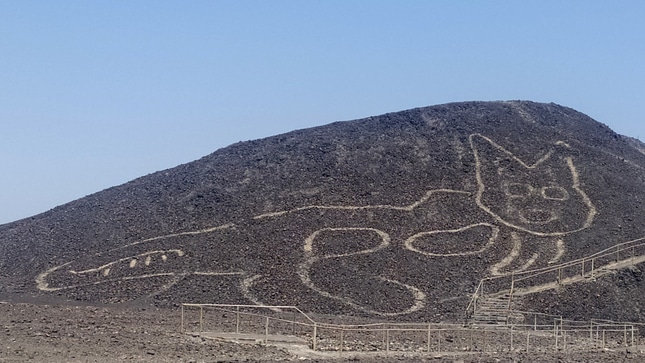 Located in a desert in southern Peru, Nazca Lines is an incredible triumph that shows the creativity of prehistoric tribes. The collection of geoglyphs—large designs—made in the soil date from 500 BCE to 500 CE and new work is constantly being uncovered. In fact, the Peruvian Ministry of Culture just unveiled the discovery of a 120-foot-long cat etched into the side of a hill.

Given its size, it's incredible that the design remained hidden for so long. It was only when workers were doing maintenance on a lookout point known as the Mirador Natural that they came across the pattern. The enormous feline was barely visible due to natural erosion on the steep hill, but once workers began cleaning the area, it appeared in all its glory.

The lines measure between 12 and 16 inches thick and now that the cat has been restored, it's easy to admire the work. Officials have stated that the design dates to the Late Paracas period, making it over 2,000 years old. This means that the cat geoglyph is one of the earlier designs in the Nazca Desert, even earlier than the famous Nazca drawings. Cats were a common motif for the Paracas, as shown in their ceramics and textiles.

The Paracas, an Andean culture that thrived between 800 BCE and 100 BCE were greatly influential to the later Nazca culture. In fact, this influence is best seen in the Nazca Desert, where the Nazca Lines borrow from many Paracas drawings. However, while the Nazca Lines are typically located on the desert valley floor, geoglyphs by the Paracas are commonly found on hillsides.

The discovery is a reminder that cultural heritage work hasn't slowed down during the pandemic. And with so much left to discover at Nazca Lines, there's plenty of work to still be done. Just last year, over 140 new geoglyphs were discovered with the help of AI, so there's surely more to come.

Workers have just uncovered a 2,000-year-old cat drawn into the side of a hill at Peru's Nazca Lines. 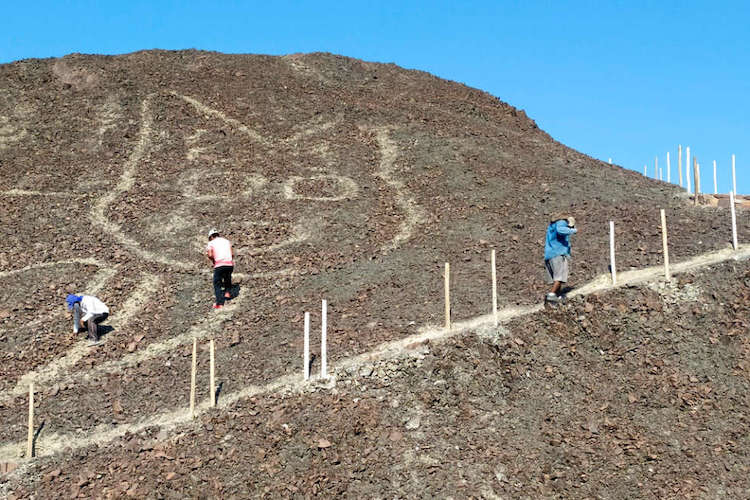 All images via the Peruvian Ministry of Culture.

Wowed by the discovery?