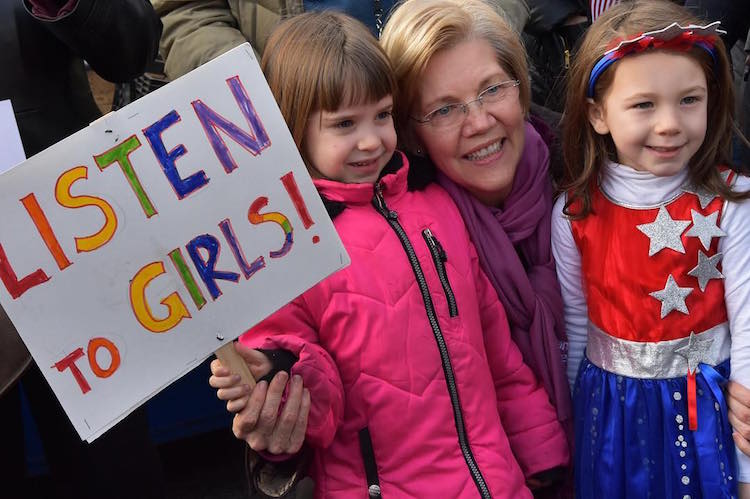 On Tuesday, Senator Elizabeth Warren took to the floor of the Senate to share the words of Coretta Scott King, Martin Luther King Jr.'s wife. In a letter written in 1986, King criticized Jeff Sessions—a senator from Alabama and the current attorney general nominee—and explained why she did not see him fit for federal judgeship at the time. As Warren read the letter aloud, she was stopped by Republican senators, who cited an obscure rule as the reasoning behind her silencing. Though she was told to sit down and be quiet, Warren instead continued to read the letter in the hallway, where she live-streamed it on Facebook. After facing backlash for not letting Warren finish her piece, Majority leader Mitch McConnell defended his actions by stating: “She was warned. She was given an explanation. Nevertheless, she persisted.”

And so a new rallying cry for women's rights was born.

Immediately following McConnell's statement, the #NeverthelessShePersisted and #ShePersisted hashtags took social media by storm. People began sharing Tweets, Facebook posts, and Instagram pictures of strong female figures who have not given up in the face of adversity, censoring, and discrimination. Accompanied by McConnell's reclaimed quotation, the posts—which feature feminist and Civil Rights icons like Warren, King, Ruby Bridges, and the Suffragettes—prove that, historically, silencing women only makes them yell louder.

Inspired by the “nevertheless, she persisted” mantra, Twitter users have shared images of the strong female figures that have inspired them, like Elizabeth Warren and Coretta Scott King.

“She was warned. She was given an explanation. Nevertheless, she persisted.” pic.twitter.com/fj3G5ZMiQ1

“She was warned. She was given an explanation. Nevertheless, #ShePersisted.” pic.twitter.com/ubZIi5rKyo

Gloria Richardson in 1963, is having none of a soldier with fixed bayonet. Nevertheless, she persisted. #NeverthelessShePersisted pic.twitter.com/gMhougPwXD

“She was warned. She was given an explanation. Nevertheless, she persisted.” (Emmeline Pankhurst) pic.twitter.com/8dLo8fyR1u

Last night @SenWarren added to a long, proud history of women refusing to be silenced. Susan B. Anthony was warned. #ShePersisted too. pic.twitter.com/VgaopyPd9i

“I feel safe in the midst of my enemies, for the truth is all powerful and will prevail.” – Sojourner Truth #ShePersisted #BlackHistoryMonth pic.twitter.com/R0elTRKE17

And even Lady Liberty.

“She was warned. She was given an explanation. Nevertheless, she persisted.”