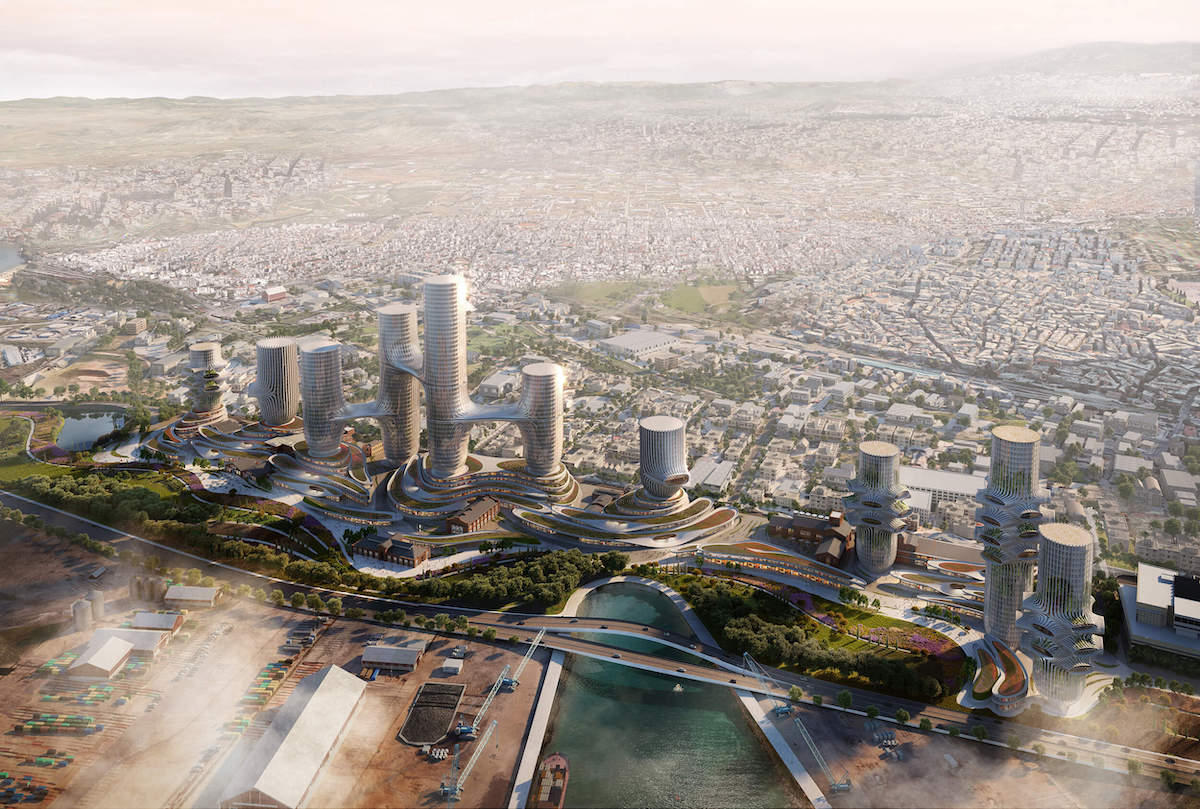 Architecture competitions offer a way for designers to envision places as they could be. One competition called ArXellence 2 asked creatives to propose ideas for the redevelopment of the Greek city Thessaloniki and its western coastal side. One response to this call is a proposal by OF. STUDIO and Degree Zero Architects called OCULIS which includes a complex of 10 futuristic towers. These modular buildings attempt to create a unified aesthetic for Thessaloniki’s new business reputation.

ALUMIL, the hosts of the competition, organized it in order to gain insight from architects around the world on how to implement a new central business district. Designers were encouraged to make their proposals sustainable and energy-efficient according to input from UIA (International Union of Architects) who endorsed the competition and provided recommendations for entries. Most importantly, the designs should seek to portray that “Thessaloniki belongs to the front line of the forward-looking cities of the world. A city able to boast, not only top-level facilities but also mixed neighborhoods with high quality of life.” 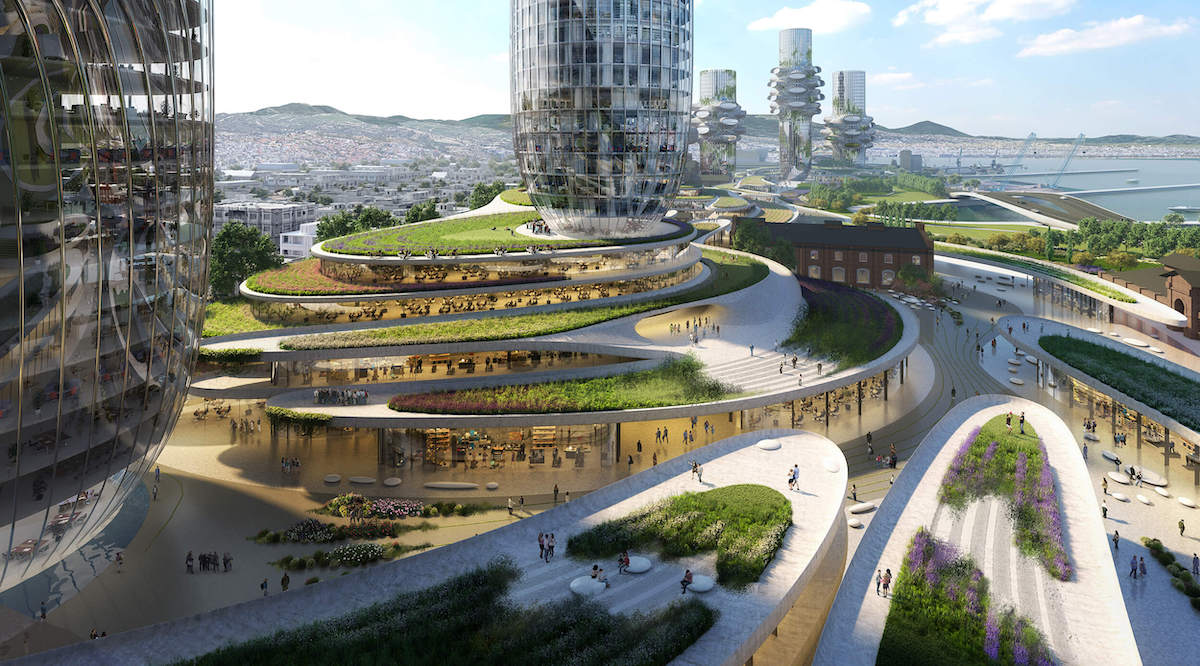 The ambitious OCULIS redevelopment plan organizes all of these design elements in an elegant proposal that creates green spaces on the south, connects to the existing context on the north, and acts as a futuristic new business center.

The plan involves a multi-use “podium” that connects all of the towers and acts as an entrance to the new central business district and the city. Public space is scattered throughout the podium along with a walking path and space for cyclists. The podium is broken up to access the bases of each tower and to be spread out into the surrounding city, creating a gradient from older to new construction as opposed to a harsh end to the development. This continuous landscape also includes subtle variation to create covered spaces, open-air spaces, and some pockets in between with different levels of shade coverage from the elements.

The towers themselves are similarly designed for flexibility and variation. They are all modular approaches that allow different masses to include as much square footage as is needed once the function is assigned. The simple tube-like design achieves a futuristic aesthetic and keeps the whole development of the same visual feel.

OF. STUDIO and Degree Zero Architects proposed a 10-tower complex to revitalize Thessaloniki's western coastal side. 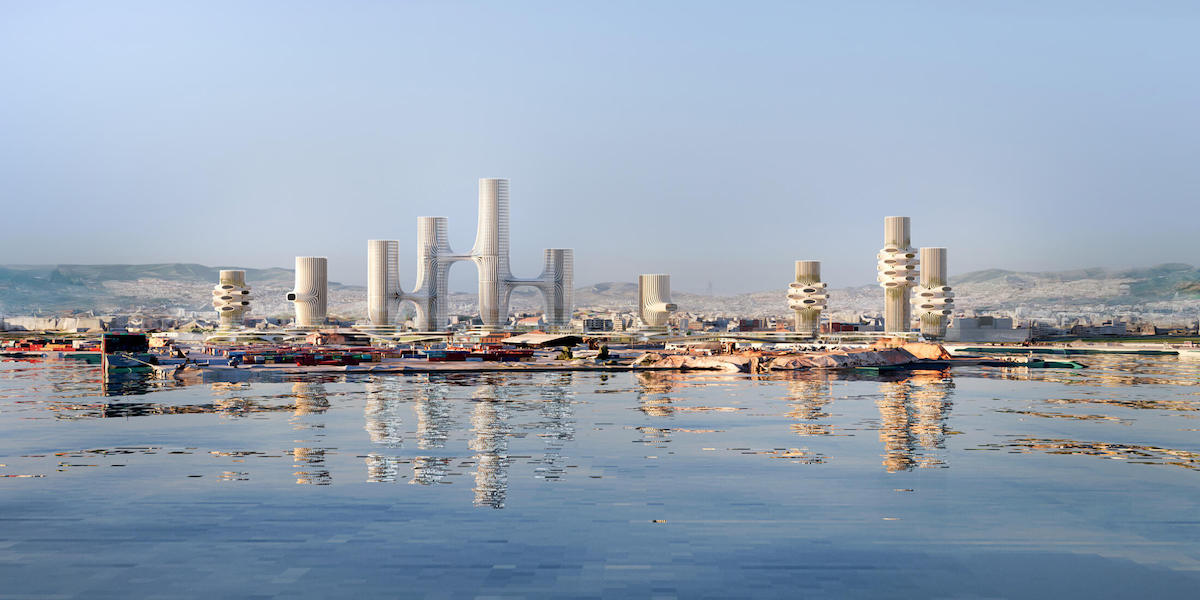 The design's “podium” connects all of the towers and acts as an entrance to the new central business district and the Greek city. 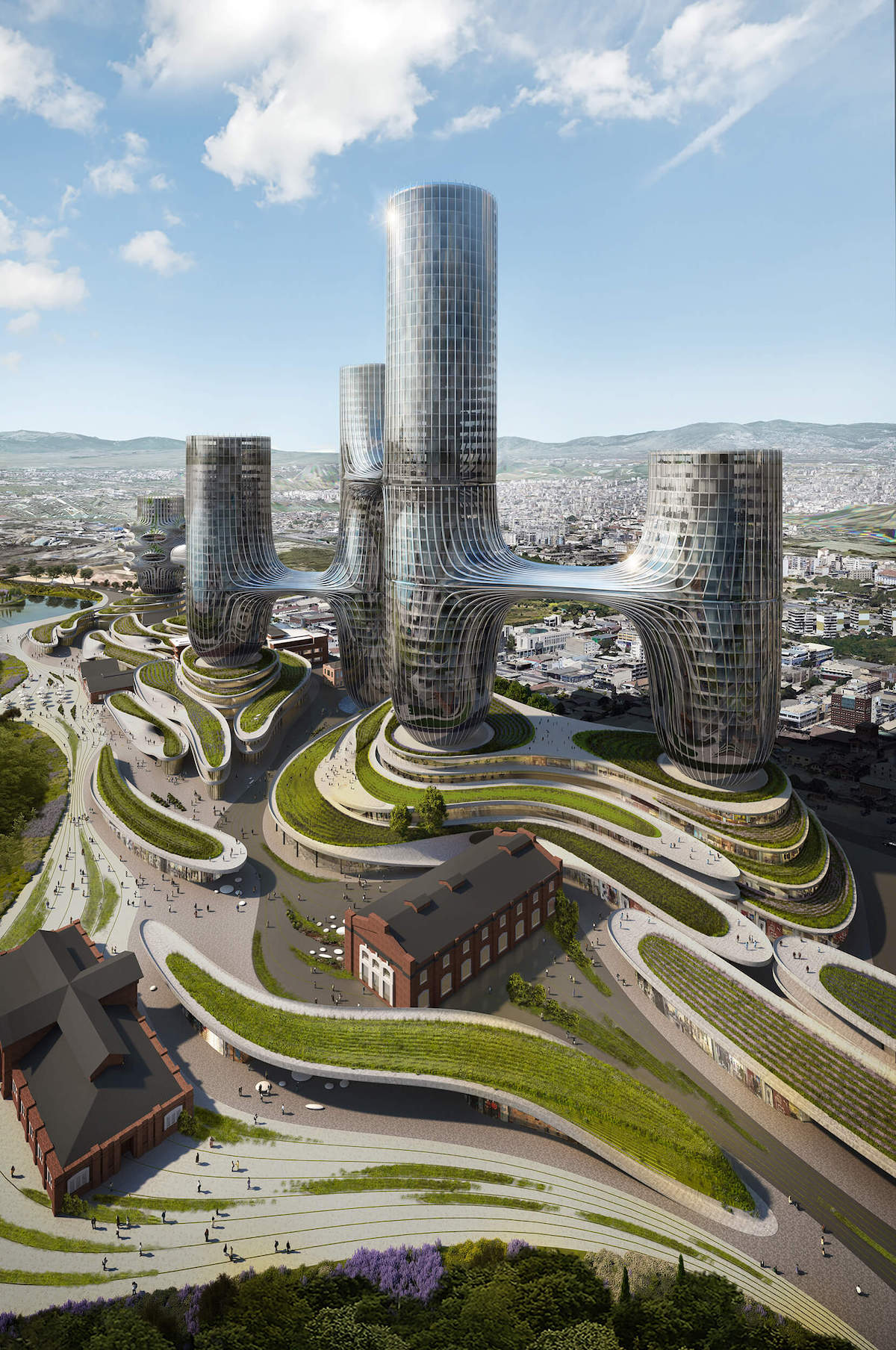 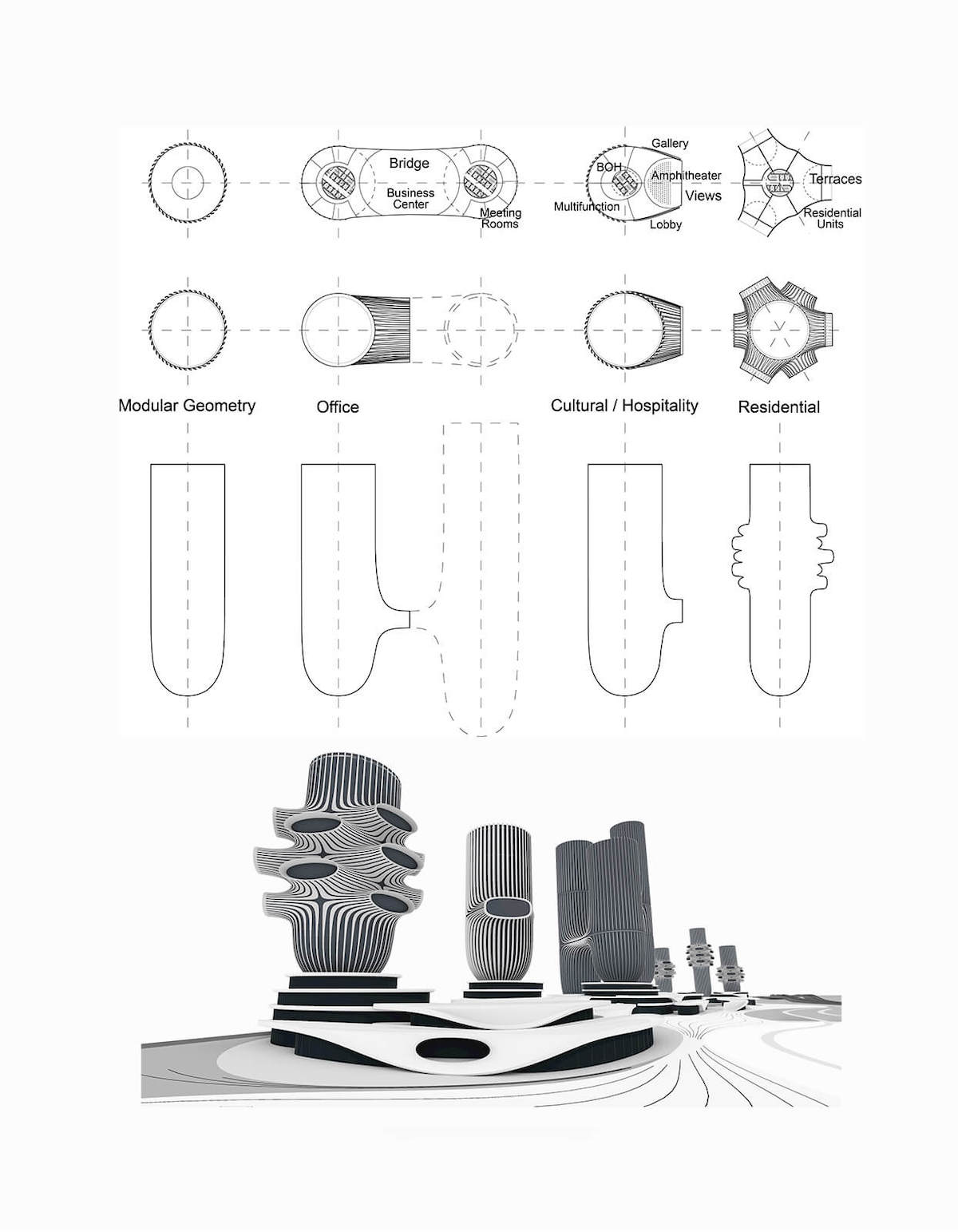 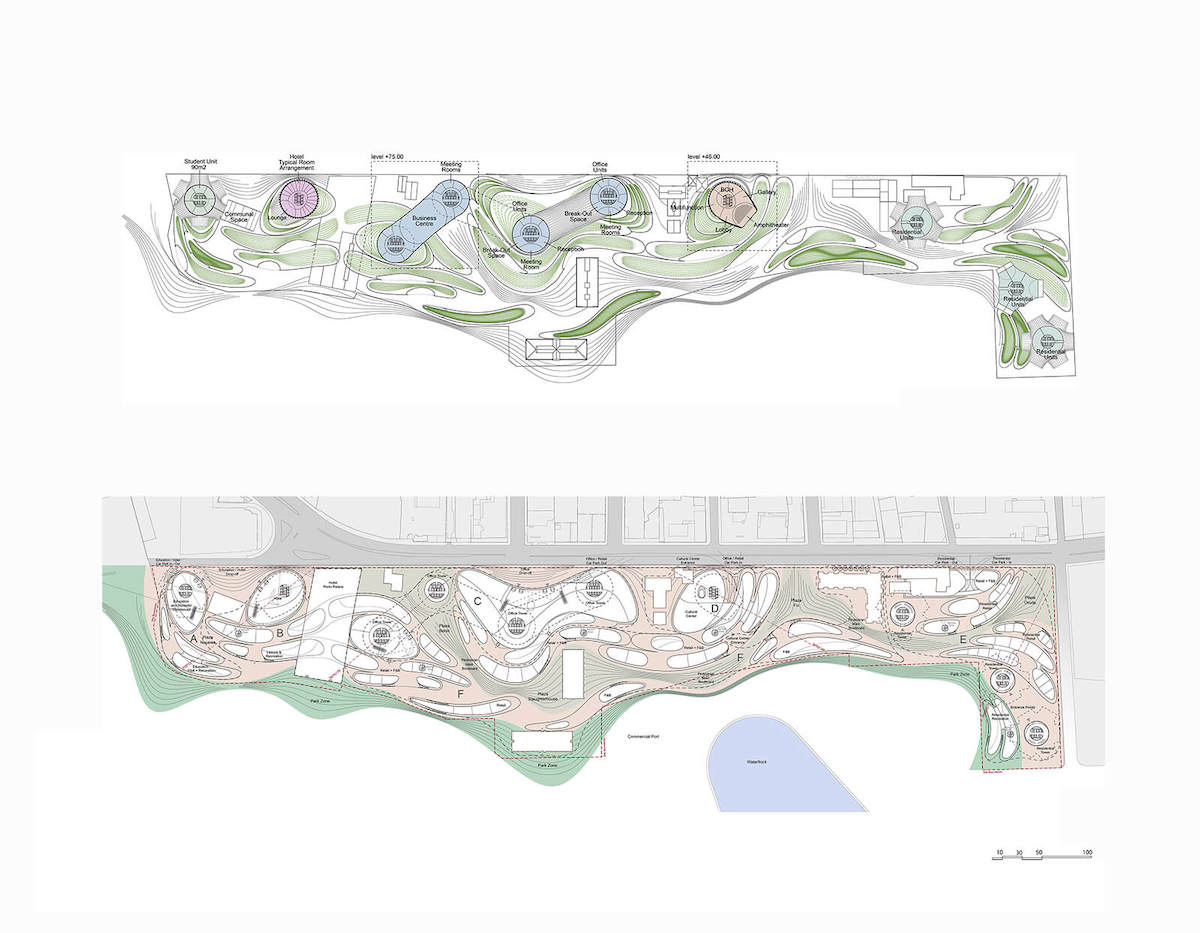 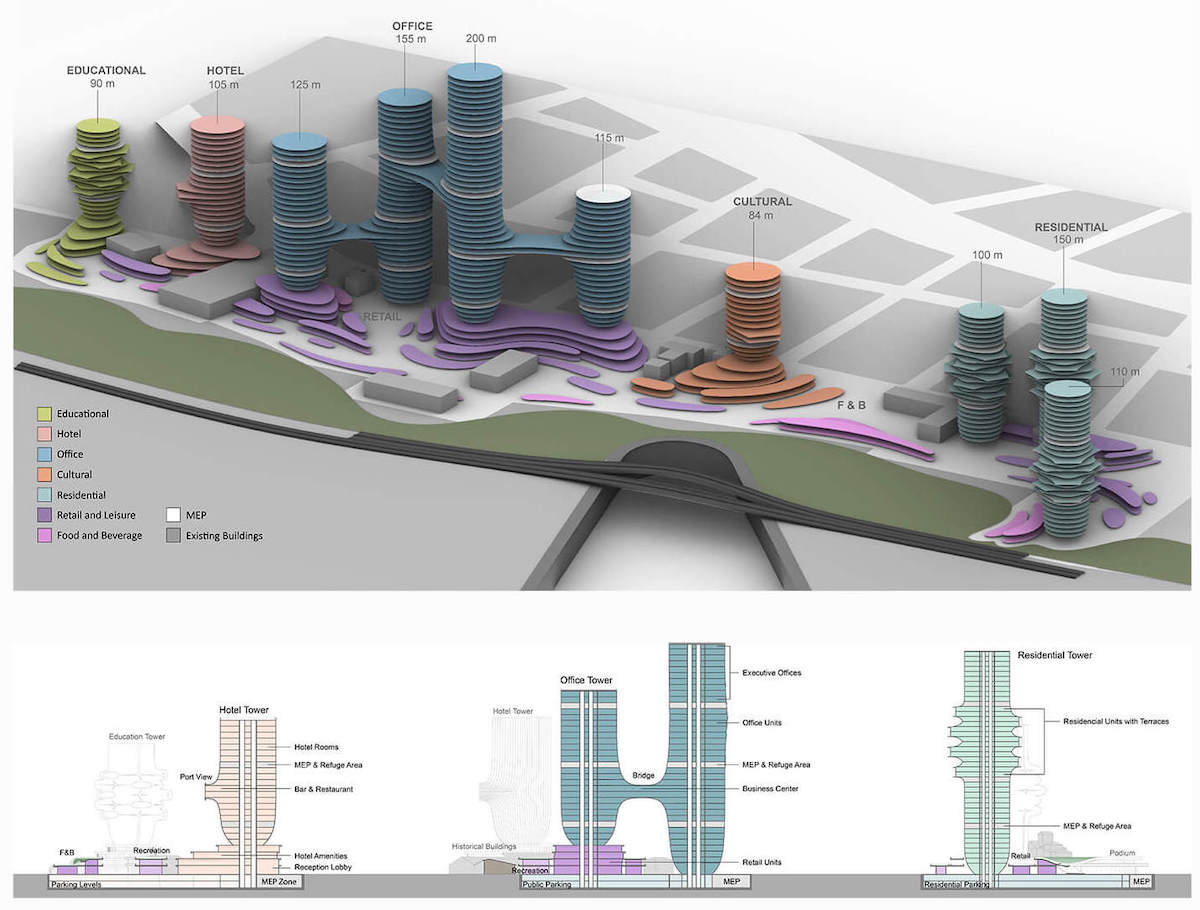 All images via OF. STUDIO, Degree Zero Architects, and Cosmoscube.

Do you like this futuristic concept? Share
Like My Modern Met on Facebook
Get Our Weekly Newsletter
Become a
My Modern Met Member
As a member, you'll join us in our effort to support the arts.
Become a Member
Explore member benefits