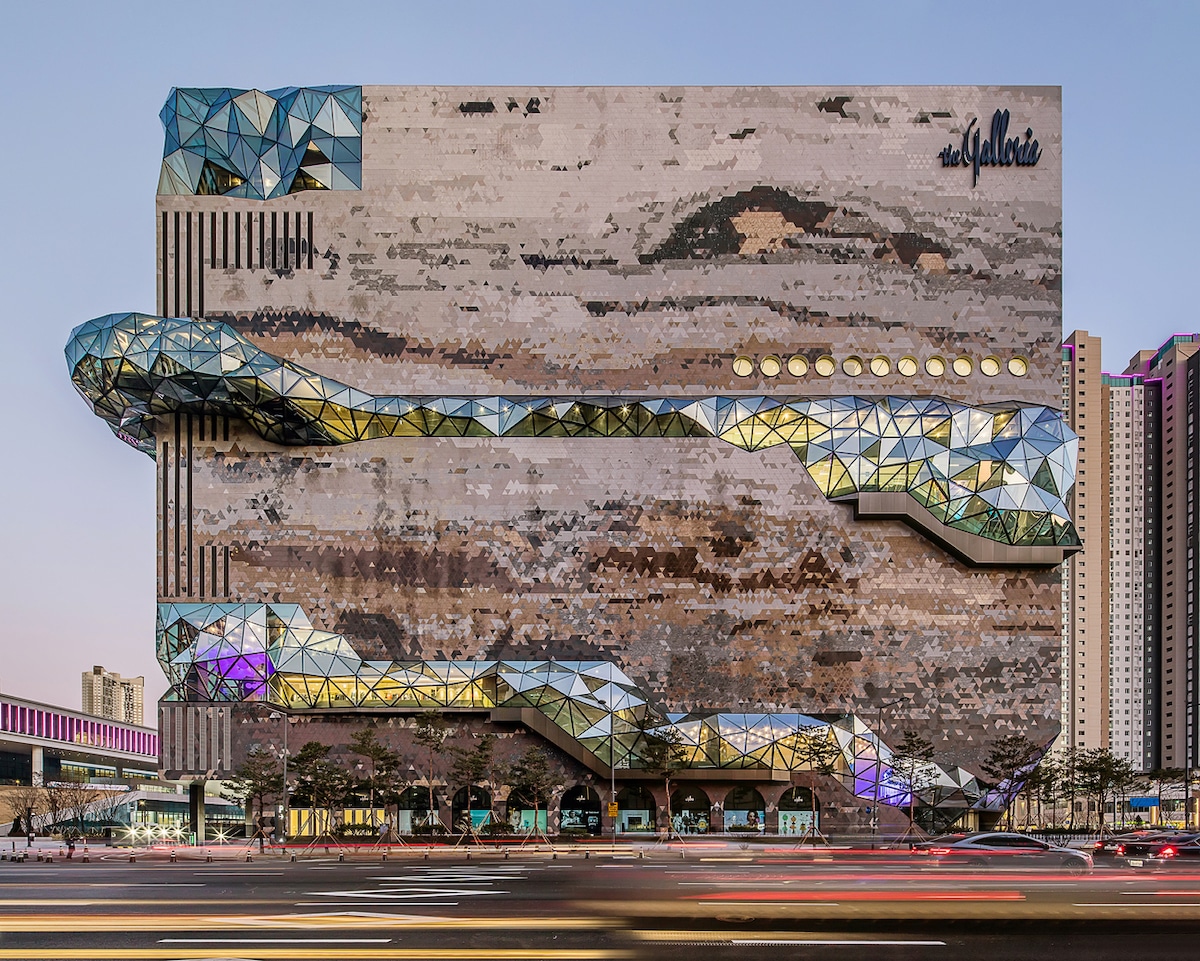 As South Korea's first and largest upscale department store, The Galleria already has a well-established presence. So, it only makes sense that owners Hanwha would want to make a splash with the opening of their sixth store. To that end, they turned to Rem Koolhaas' OMA to create a memorable structure that reflects their high-end sensibilities.

Located in Gwanggyo, south of Seoul, the contemporary building is set off by a serpentine diamond that cuts through the mosaic stone facade. Its pixelated pattern provides a texture that brings movement and lightness to what might have otherwise been a heavy piece of architecture. OMA conceived the building as a “sculpted stone emerging from the ground” in an effort to provide the neighborhood with a “visual anchor.”

The multi-faceted glass that slices through the facade acts as a public walkway for visitors to traverse the retail and cultural spaces located in the interior. Throughout the day, as light changes and bounces off the glass, the building takes on different guises while the glow of interior lights gives glimpses of what lays inside.

“On every level there is a relationship among the loop, the central space, and the surrounding shops,” explains OMA partner Chris van Duijn. “The route is sometimes excavated from the building, eating its way through the stone, and other times the glass openly exits the facade, creating a steel structure of regular triangular grids.”

Sprawling across 10 floors, The Galleria includes a food market, cinema, cultural center, and roof garden as well as traditional retail spaces. Its addition to Gwanggyo, which is a young city, has added a spark of individuality to the planned urban landscape and will surely become a cultural beacon as the area continues to develop.

OMA has designed The Galleria, a new department store in Gwanggyo, South Korea. 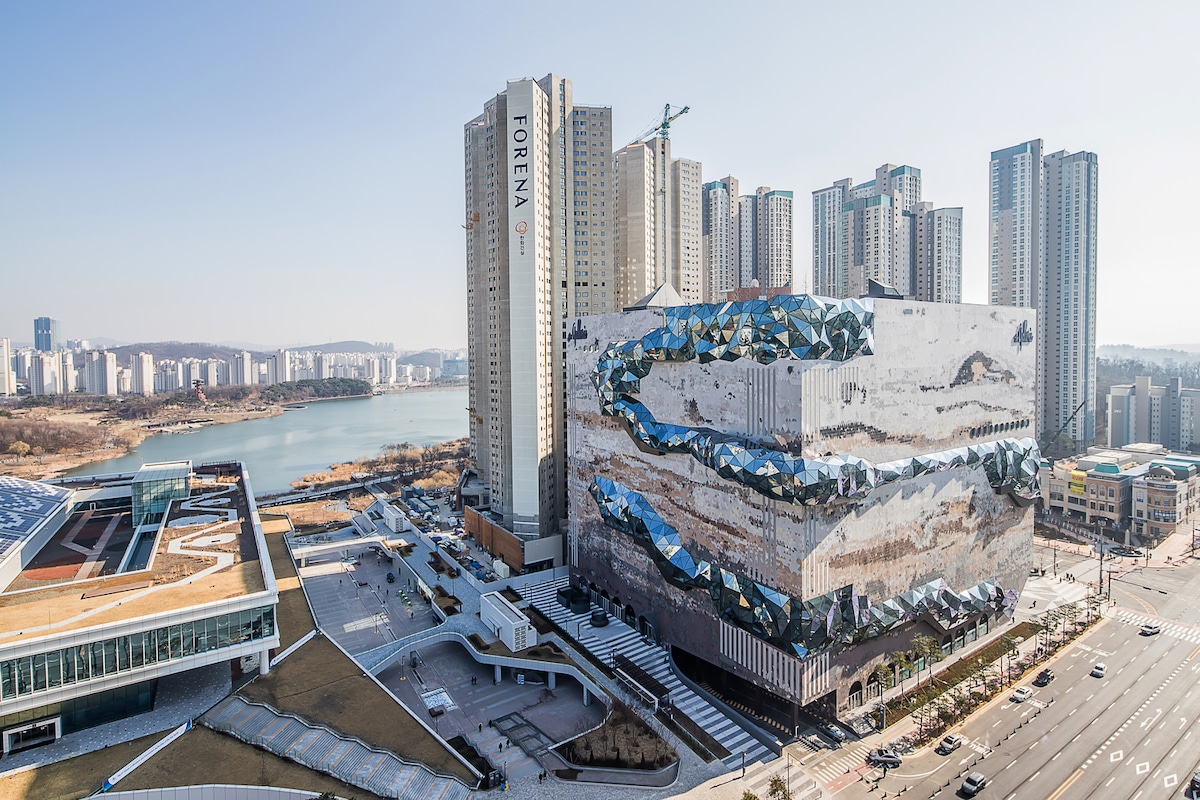 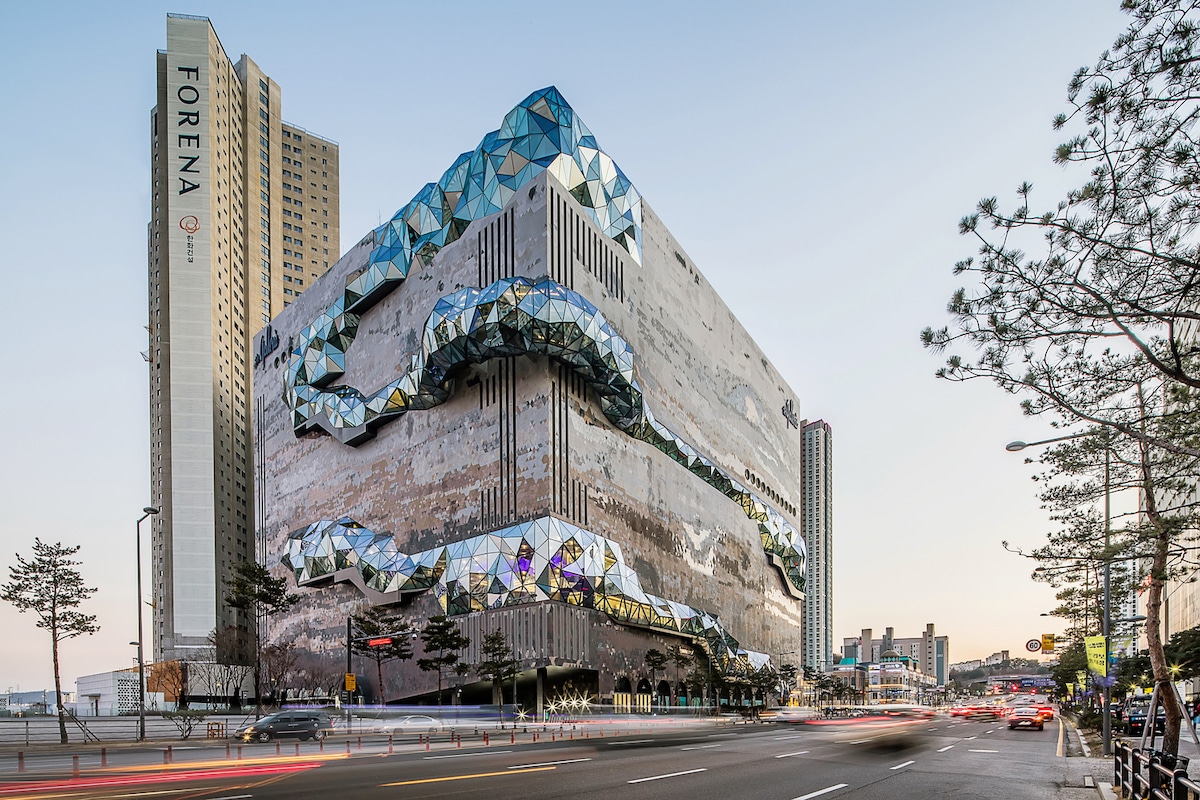 A glass-faceted walkway slices across the mosaic stone facade and allows the public to move across different floors. 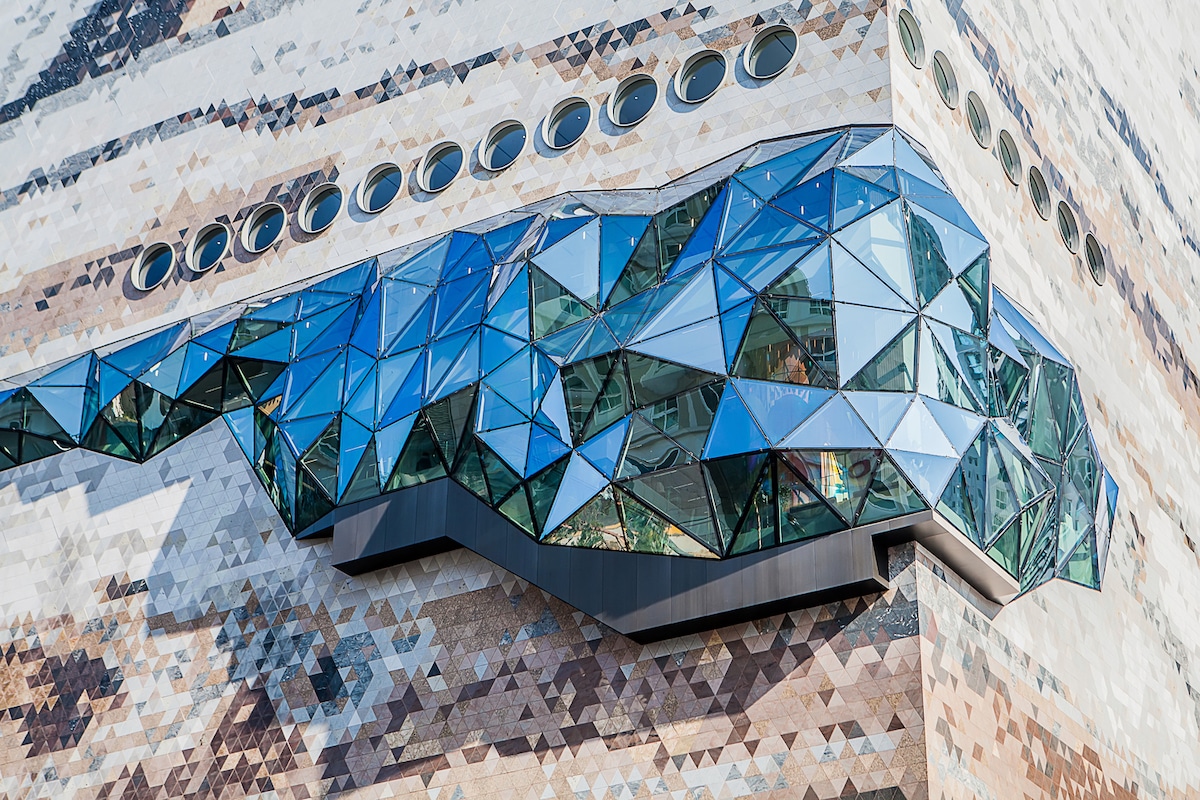 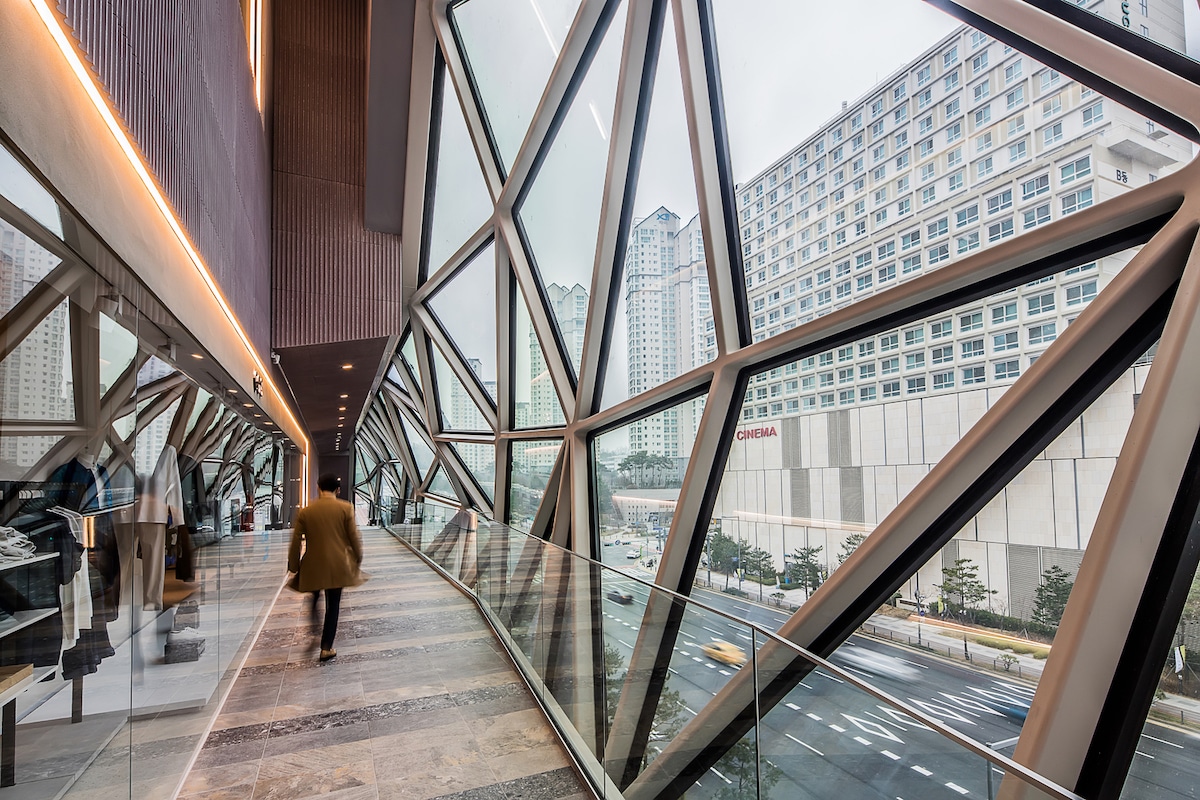 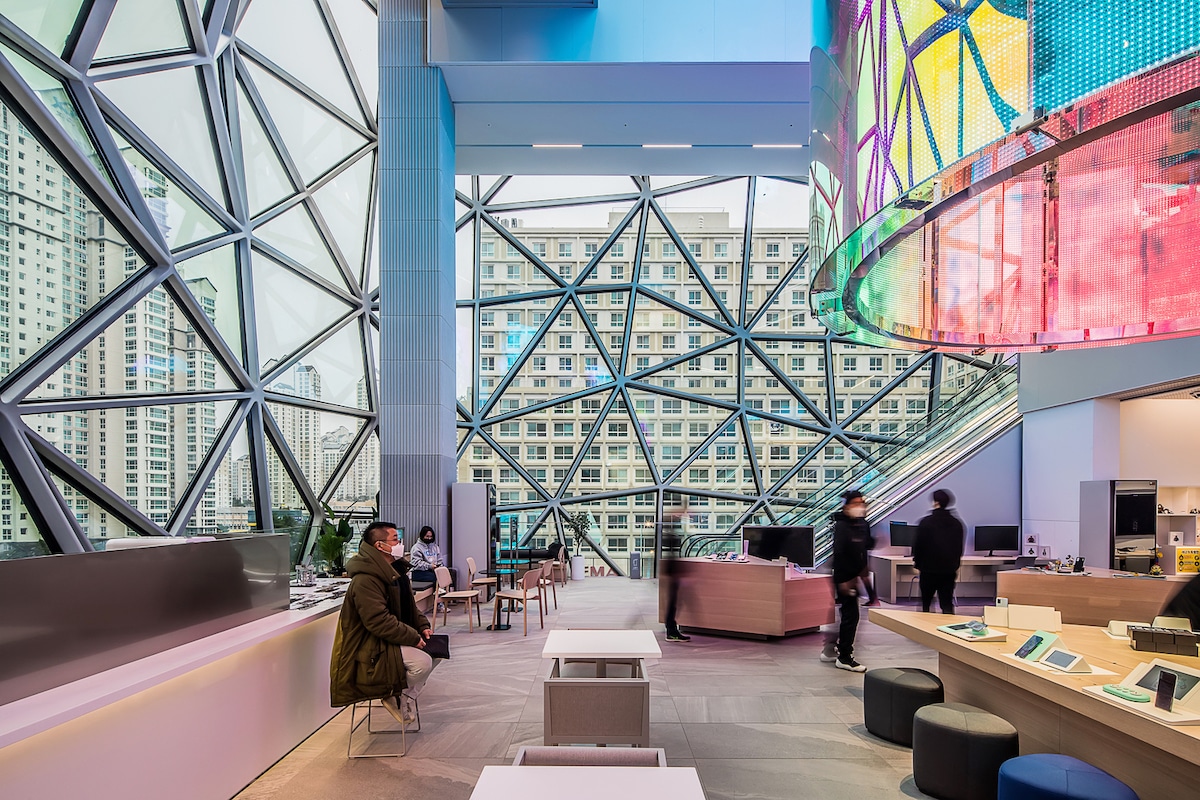 The architects designed The Galleria as a “visual anchor” for this new city south of Seoul. 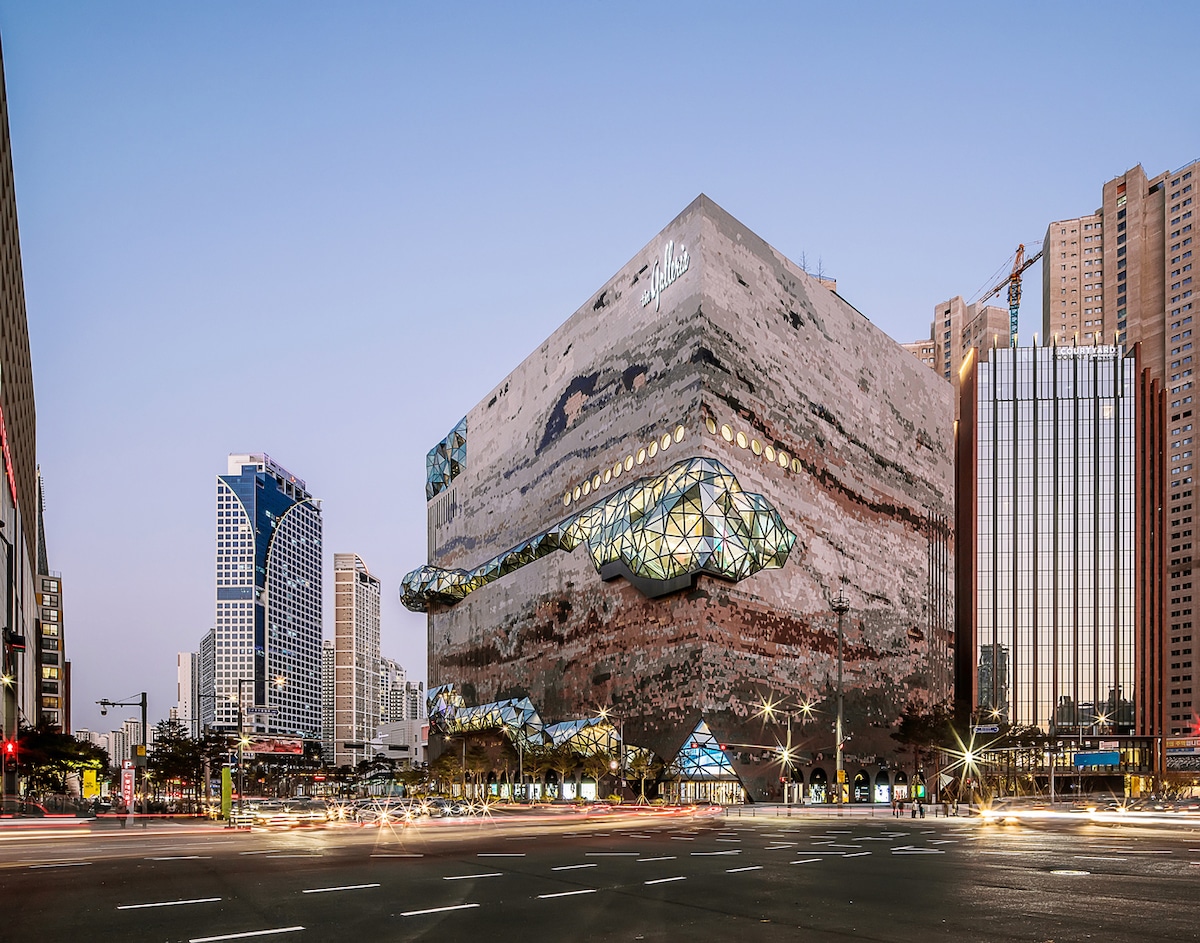 All images via Hong Sung Jun, courtesy of OMA.

Futuristic Bookstore in China Designed to Bring Readers Into a Cloud

In love with this design? Share
Like My Modern Met on Facebook
Get Our Weekly Newsletter
Become a
My Modern Met Member
As a member, you'll join us in our effort to support the arts.
Become a Member
Explore member benefits