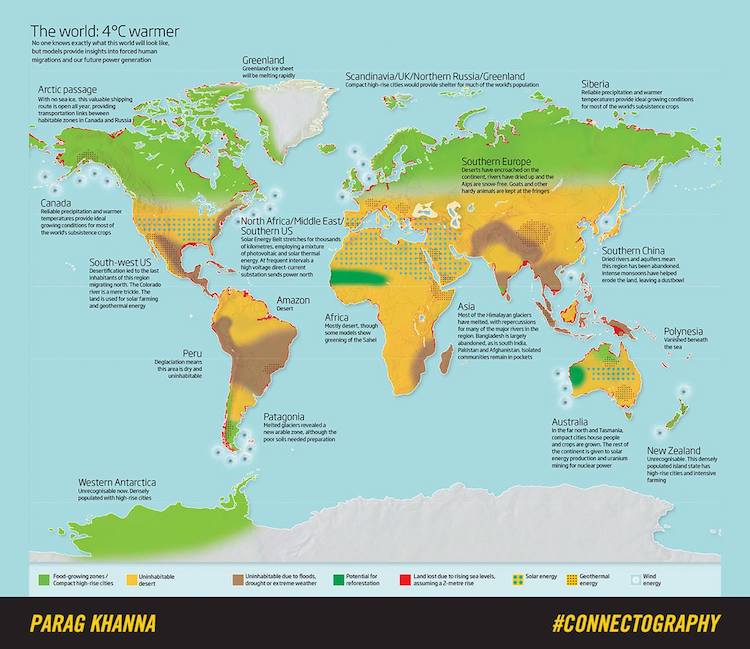 Click to enlarge.
This post may contain affiliate links. If you make a purchase, My Modern Met may earn an affiliate commission. Please read our disclosure for more info.

We read a lot about global warming in the headlines, and climate change is certainly one of the biggest concerns for most scientists, but what would the actual impact on our geography look like? International relations expert and best-selling author Parag Khanna gives a glimpse into our possible future with his global warming map.

Khanna's world map shows what Earth would look like if—or when—it becomes 4 degrees Celsius (7.2 degrees Fahrenheit) warmer. Though first published by New Scientist in 2009, the map is still a haunting reminder that we can't afford to sit back when it comes to saving our environment.

In fact, most of us would be on the move, with the most populous areas of the map now uninhabitable. As the map shows, Deserts engulf the Amazon, South-West United States, Southern Europe, and Australia, pushing populations elsewhere. Islands like Polynesia have vanished altogether, swallowed by the sea, and Southern China is left as a dustbowl.

Warmer temperatures mean even bigger changes for colder climates, with Khanna suggesting that the melting of the Himalayan glaciers will cause populations to abandon Bangladesh and southern India. Canada and Siberia will transform into hubs of agriculture, warmer climates making them now suitable to produce much of the world's food supply. And suddenly, living in Antarctica won't mean bundling up. In fact, Antarctica's western coast will be densely populated, taking on people who find themselves fleeing from their once habitable land.

It all seems like strange fiction, but scientists have warned that it's a sad reality. Since 2013, researchers have predicted that by the end of the century the world will arrive at this point of no return. “Four degrees Celsius would likely be catastrophic rather than simply dangerous,” Professor Steven Sherwood of the University of New South Wales in Australia told The Guardian at the time. “For example, it would make life difficult, if not impossible, in much of the tropics, and would guarantee the eventual melting of the Greenland ice sheet and some of the Antarctic ice sheet.”

Read more about Parag Khanna's thoughts on how our world will develop in Connectography: Mapping the Future of Global Civilization.

Surprised by this global warming map? Share
Like My Modern Met on Facebook
Get Our Weekly Newsletter
Become a
My Modern Met Member
As a member, you'll join us in our effort to support the arts.
Become a Member
Explore member benefits

Surprised by this global warming map?