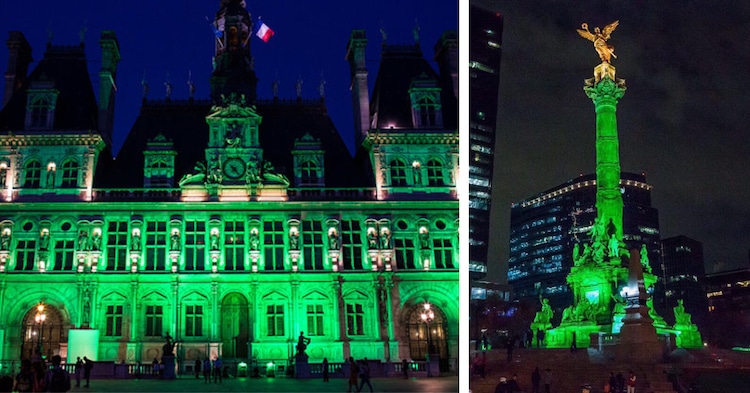 Last week, President Trump made the landmark decision to withdraw the United States of America's participation in the Paris Climate Agreement. This action—which goes into effect in 2020—will make the United States 1 of only 3 countries to opt out of the pact, which “sets out a global action plan to put the world on track to avoid dangerous climate change,” according to the esteemed European Commission. Given the inevitable impact of Trump's decision, cities around the world have come together to prove their dedication to going green—literally.

On the night of June 1, green lights lit up the exteriors of major monuments and landmarks across the globe, from the ornate façade of Paris' Hôtel de Ville (city hall) to the classically-inspired architecture of the Wilson Building in Washington DC. This luminous, international spectacle showcased not only the cities' support for the Paris Agreement, but also the seriousness of their solidarity.

On top of this daring display, many leaders (both foreign and domestic) have made statements expressing their disappointment over President Trump's decision—though most remain committed, hopeful, and, above all else, defiant. “Regardless of #Trump's decision,” Anne Hidalgo, the mayor of Paris, explains on Twitter, “cities will apply #ParisAgreement.”

On the night of June 1, monuments around the world were bathed in green light in support of the Paris Agreement. These green landmarks ranged from city halls to skyscrapers and could be found in a number of cities, including:

Regardless of #Trump‘s decision, cities will apply #ParisAgreement. #Climate pic.twitter.com/cW9n0EoQa7

World: the Empire State stands with you. New York shines green for our planet, our health and our children's future. #ParisAgreement pic.twitter.com/Ubw7WSPgu0

City Hall is green tonight. Boston stands with the environment. We must protect our future. #ParisAccord pic.twitter.com/yTL5albn2f

Montreal salutes you and supports you Bill. Cities from the world supports #ParisAgreement pic.twitter.com/U3nLbxcVPs

Time for the world to hold firm on the Paris agreement – Sydney Town Hall is lit green tonight, alongside city landmarks around the world pic.twitter.com/vMh8HU2lNN