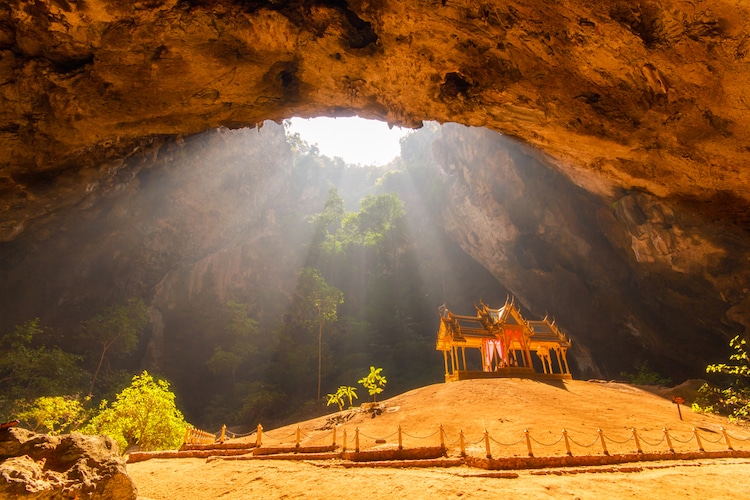 Photo: Stock Photos from Southtownboy Studio/Shutterstock
This post may contain affiliate links. If you make a purchase, My Modern Met may earn an affiliate commission. Please read our disclosure for more info.

Thailand is filled with spectacular scenery, but nothing is perhaps as magical as what's hidden within the Phraya Nakhon Cave. With a location that's not simple to access, it takes adventurous travelers to make their way to the cave. But, if the visit is timed just right, those who make it will be rewarded with a spectacular vision. As the sun's rays stream into the cave's ceiling opening, a stunning pavilion is illuminated with a golden glow.

The Khuha Kharuehat Pavilion was built for King Chulalongkorn's visit in 1890. Also known as Rama V, he is credited with saving Siam from colonization. As he's often referred to as “the Great Beloved King,” it's no wonder that such effort went into making his visit to the cave special. The warm golden rays of sunshine that bathe the pavilion in light are certainly fit for a king, so much so that several other Thai kings later visited Phraya Nakhon.

Located within the Khao Sam Roi Yot National Park, which is situated in the northern part of the Malay peninsula, it does take some effort to get to it. Curious travelers will want to make their way to the Bang Pu village. From there, it's possible to either walk 30 minutes up a hill or to take a boat to the Laem Sala beach, which is recommended to conserve energy. Once there, visitors pay an entrance fee to the National Park and have the option of bringing a guide—often a child—with them. It's here where things get tricky. It'll take a 1,410-foot climb through the forest to get to the open ceiling of the cave. While it might not seem like much, the steep and uneven climb can be difficult for those not in great shape.

As strenuous as the climb can be, the payoff is worth it. Though the exact time varies from season to season, typically around 10 am or 10:30 am is when the sun's rays can be expected to pour into the cave. Not only is the red and gold pavilion illuminated, but so is the lush vegetation that grows in the cave. This makes for an incredibly meditative experience that combines the wonders of the natural and man-made world.

Curious to visit this unique site yourself? Many people book half-day tours to Phraya Nakhon from Hua Hin, a beach resort town about 45 minutes away.

During the morning hours, sunshine pours through the cave's opening, illuminating a golden pavilion. 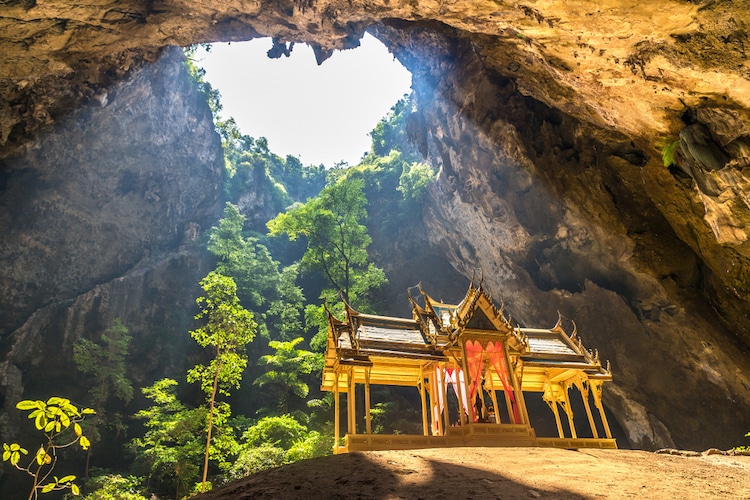 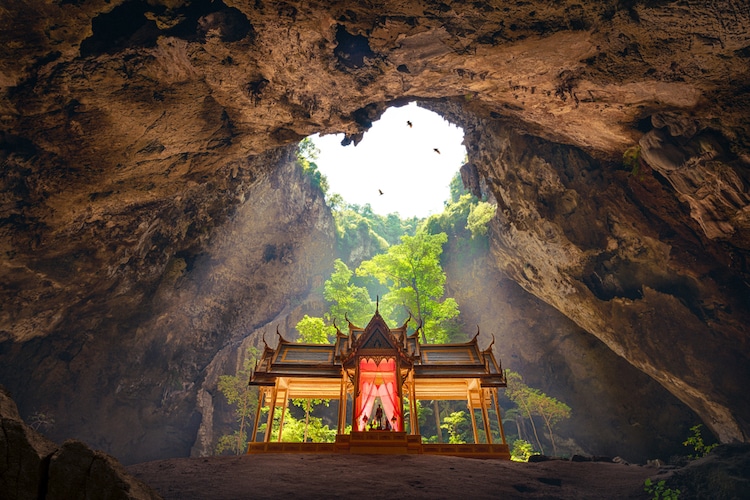