A 700-year-old Banyan tree in India is receiving special treatment to help revive its dying branches. The tree, known as Pillalamarri, is a major tourist attraction in Mahabubnagar, as it was commonly known for its wide branches sprawling across 4 acres. But the influx of tourism may have contributed to its slow destruction, with maintenance work in the area as well as visitors damaging the tree, causing a slow death to the beloved Banyan.

Now, the Tourism Department is taking proactive steps to keep Pillalamarri alive by using hundreds of plastic bottles filled with a pesticide to help combat a termite infestation that is just one of the elements attacking the tree. “This process has been effective,” Forest Officer Chukka Ganga Reddy told the Times of India. “Secondly, we are watering the roots with the diluted solution to kill the termites. And in a physical method, we are building concrete structures to support the collapsing heavy branches.”

The tree, which is estimated to be between 600 and 800 years old, is facing multiple issues which have converged to accelerate its decay. Thanks to its popularity as a tourist attraction, many branches were cut to facilitate movement; additionally, cement seating structures were installed under the tree. Leaves were swept up daily and burned to give the area a clean appearance. However, this meant that the tree was deprived of nutrients the decaying leaves can provide. Dams were built on a local stream to stop water in the area of the forest, but recent droughts have meant that the groundwater level has been heavily depleted. Furthermore, tourists often climbed the branches, pulled off bark, or plucking leaves from the tree.

As conditions worsened, the Banyan's heavy branches began to grow low to the ground instead of upward. This exposed the tree to an increased number of pests, such as termites, white fungus, and grubs that are attacking the roots. While the special “IV drip” has created some positive results, experts are quick to point out that year-round maintenance needs to happen in order to ensure that Pillalamarri will live another 700 years.

City officials believe that they'll truly begin to see the results of the work in the next year. For now, the site will be open, but visitors will have to admire the Banyan at a distance, as they'll be kept away with barricades, as a safety precaution. 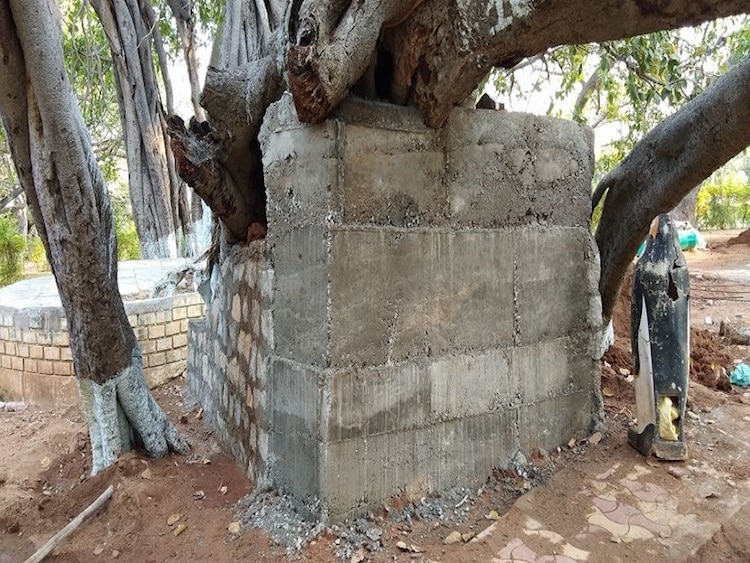 All images via District Administration, Mahabubnagar unless otherwise noted.