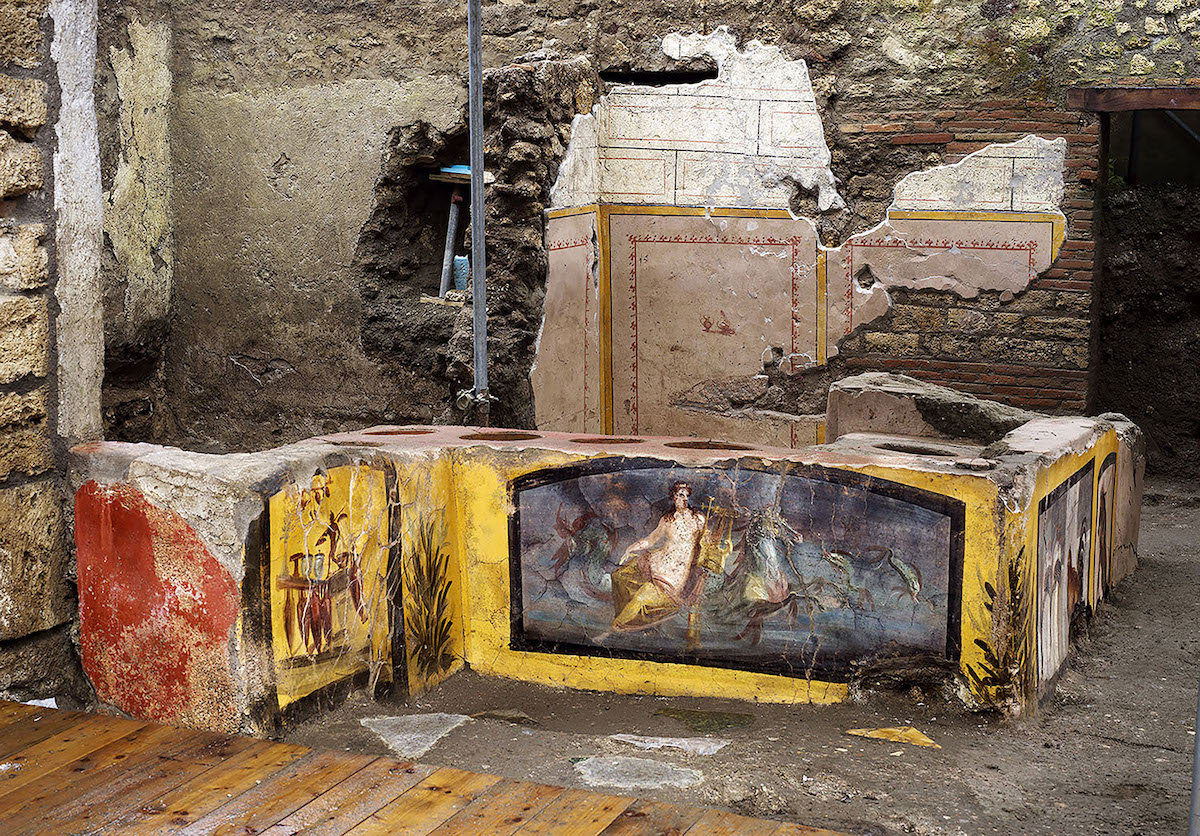 Even after hundreds of years of archaeological excavation, new finds on the historic site of Pompeii are still frequently unearthed. Most recently, researchers have completely uncovered an incredibly well-preserved thermopolium or fast-food counter covered in colorful frescos. The Thermopolium of Regio V was first excavated in 2019 and has since been carefully revealed since then. Aside from the still vibrant art, this dig provided valuable insight into the diet and daily life of Romans living in the city just before the eruption of Mount Vesuvius in 79 CE.

The portraits of roosters, mallard ducks, and other local birds may have provided a visual menu for customers. Remains preserved under the volcanic ash included that of pigs, fish, goats, and cows all cooked together in a mixed dish. Mostly preserved jars also held clues for local customs like the crushed fava beans used to flavor wine. 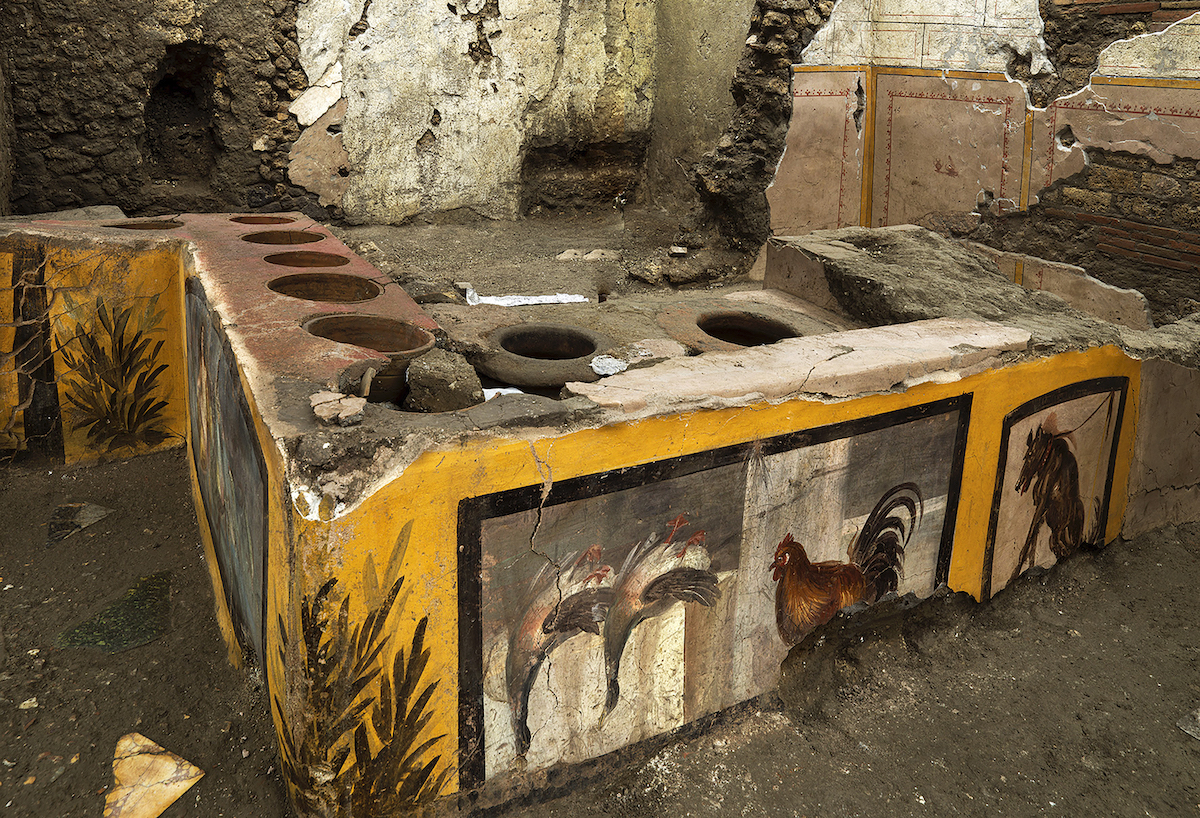 Massimo Osanna of the Archaeological Park of Pompeii explains why these findings are so unique and important to further research: “As well as being another insight into daily life at Pompeii, the possibilities for study of this Thermopolium are exceptional, because for the first time an area of this type has been excavated in its entirety, and it has been possible to carry out all the analyses that today's technology permits. The finds will be further analyzed in the laboratory, and in particular, those remains found in the dolia (terracotta containers) of the counter are expected to yield exceptional data for informing an understanding of what was sold and what the diet was like.”

While researchers are happy at this exciting prospect, it is difficult to separate the novel archaeological find from the tragedy of Vesuvius’ eruption. The remains of a man around 50 years old were found near the bed of a child. “The counter seems to have been closed in a hurry and abandoned by its owners but it is possible that someone, perhaps the oldest man, stayed behind and perished during the first phase of the eruption,” Osanna describes. Another man—possibly a thief—was found with his hand still on the lid of a just-opened pot. Even a dog, perhaps the one depicted on the thermopolium’s wall, was found between the doors of the structure.

These frozen moments in time are the same kind of human stories that keep us fascinated in Pompeii so long after its demise. Since almost a third of the city remains buried and resources continue to grow as excavations uncover new material, we can expect to soon learn more about the Ancient Romans that lived there.

Researchers in Pompeii have uncovered an incredibly well-preserved thermopolium, or fast-food counter, covered in colorful frescos. 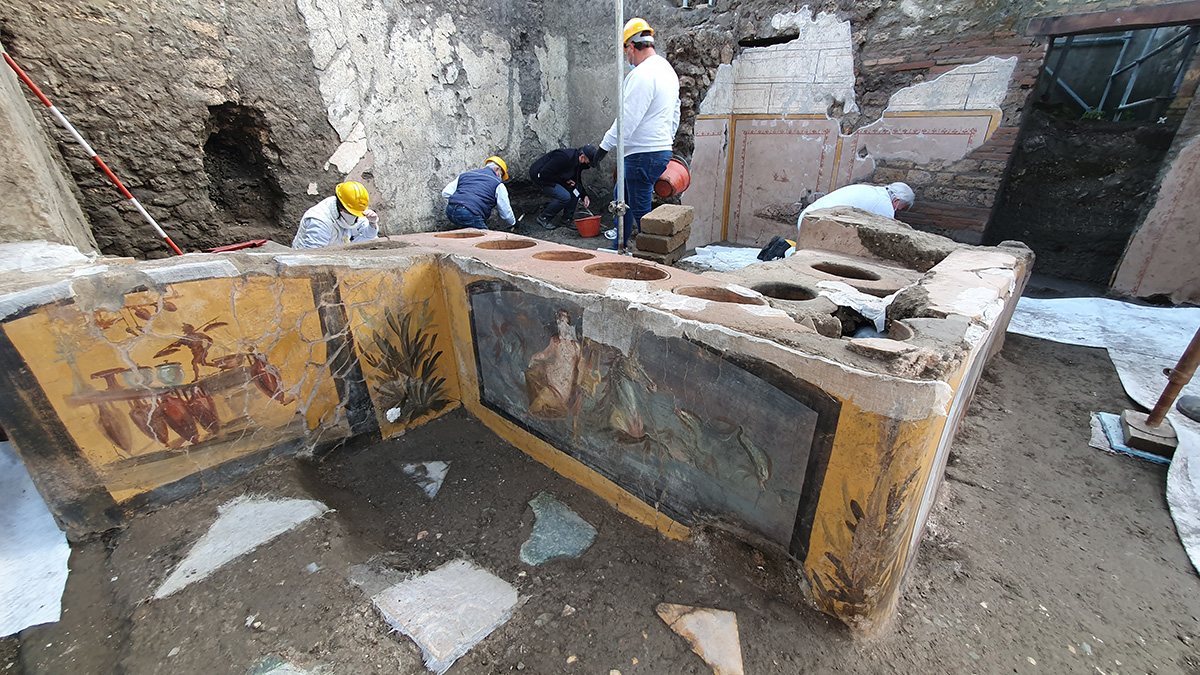 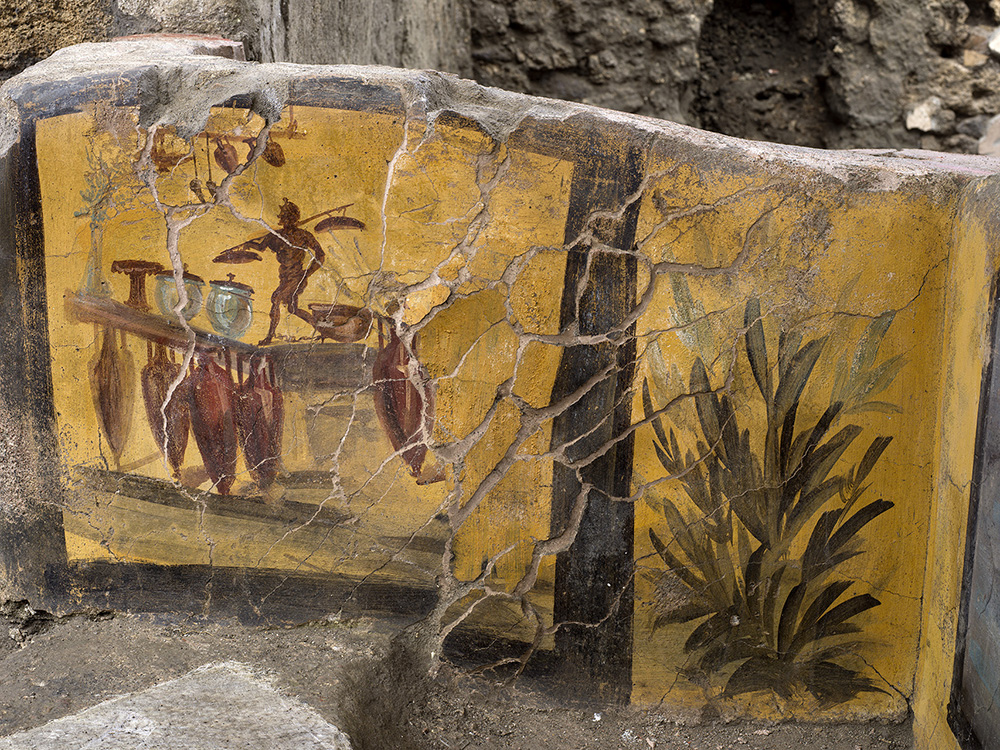 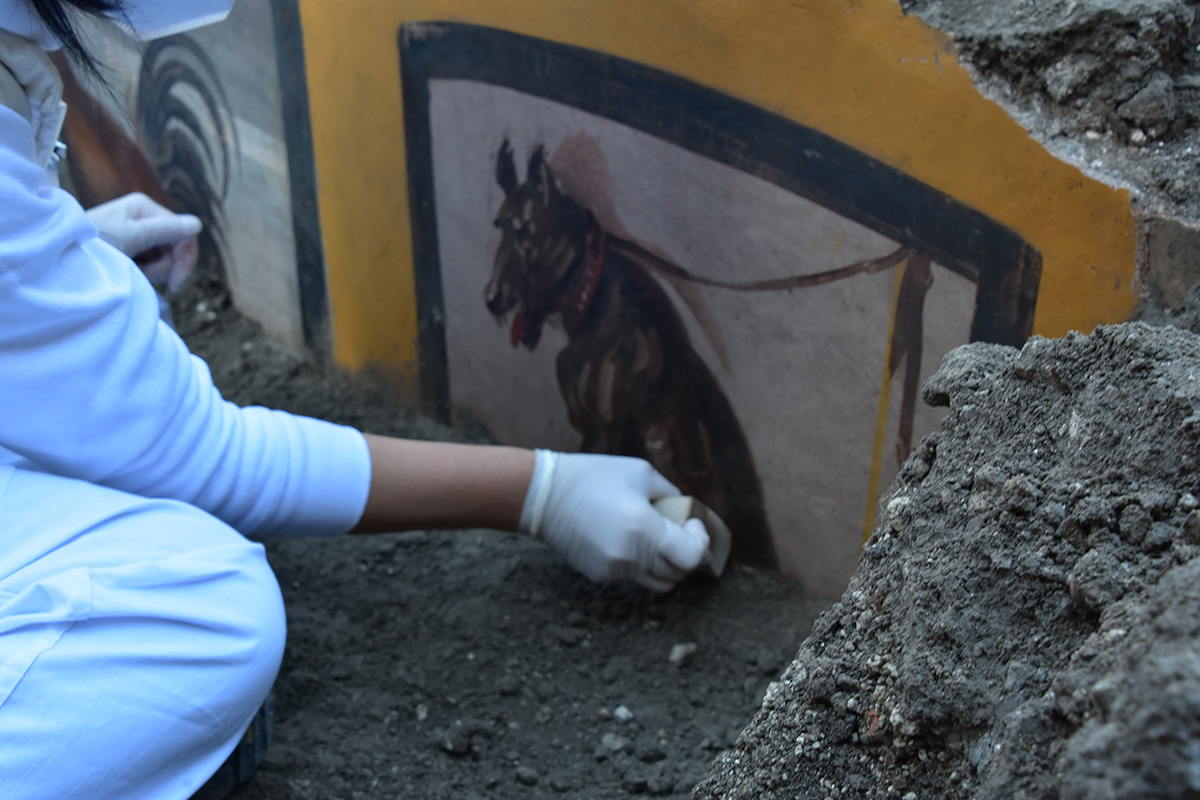 Aside from the still-vibrant art, this dig provided valuable insight into the diet and daily life of Romans living in the city just before the eruption of Mount Vesuvius in 79 CE. 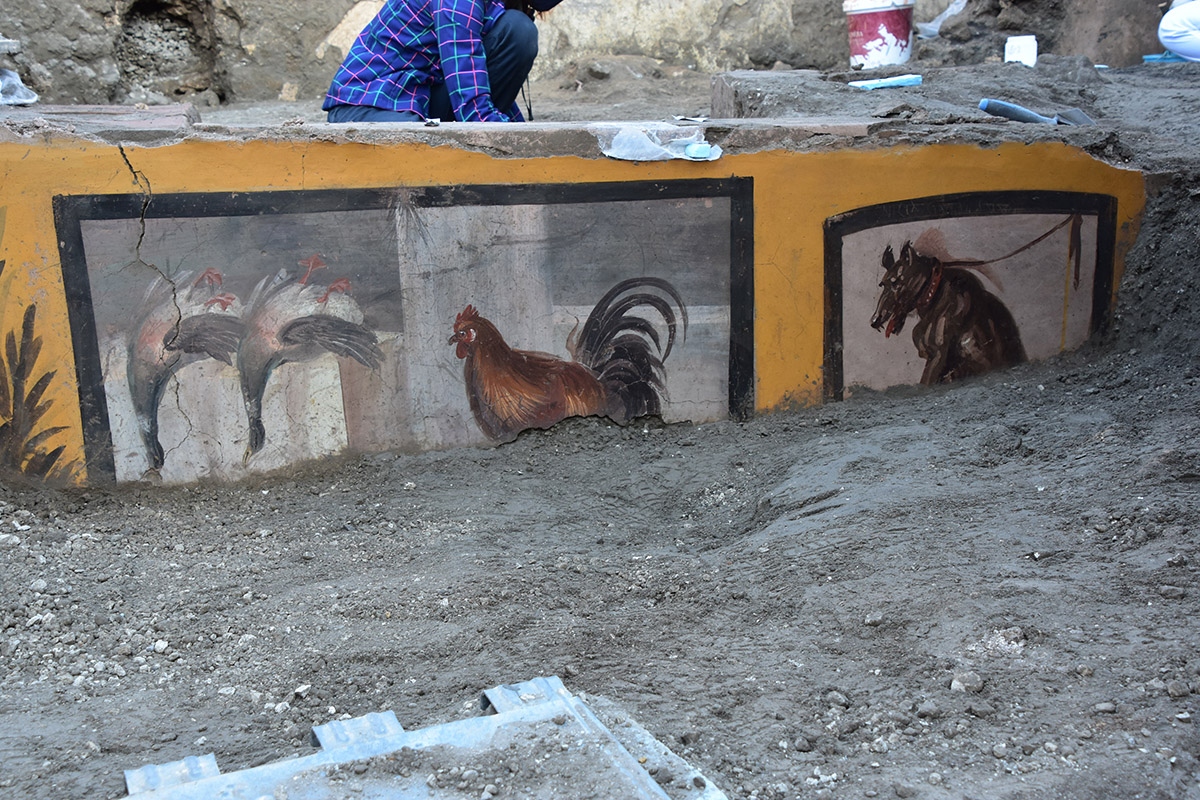 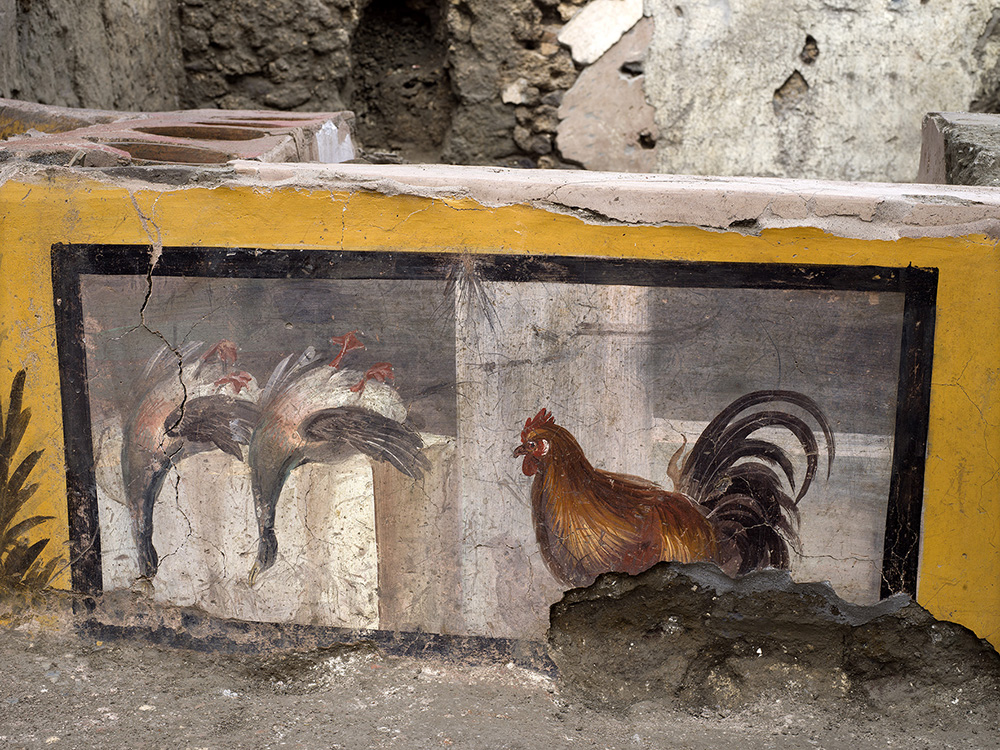 All images via Archaeological Park of Pompeii.

Would you visit Pompeii? Share
Like My Modern Met on Facebook
Get Our Weekly Newsletter
Become a
My Modern Met Member
As a member, you'll join us in our effort to support the arts.
Become a Member
Explore member benefits