Pilot Captures Rare Photo of a “Microburst” Raining Over Phoenix 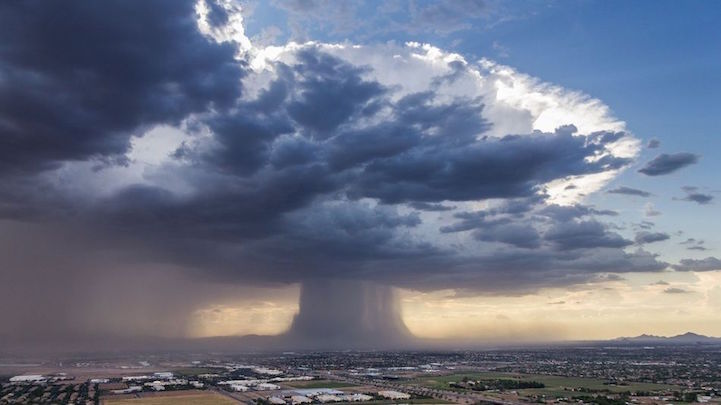 Last week, photographer Jerry Ferguson and newscopter pilot Andrew Park, both of Chopperguy Aerial Video and Photography, were covering a dust storm brewing in Phoenix, Arizona, when they came upon a microburst—one of the most rare and dangerous meteorological phenomenons. Fortunate to be at the right place in the right time, Ferguson was able to capture a few shots that will go down in weather-photographing history.

Found in extremely strong thunderstorms, microbursts are, simply defined, as the the inverse of a tornado. While tornadic winds move in and up, the winds of a microburst flush down and out. This particular microburst was wet, meaning that the effect creates a cylinder of rain flooding down from the sky, like a vertical hurricane. “I instantly thought the same thing as everyone else,” Ferguson told us in an email, “it looks like an atom-bomb just detonated over Phoenix.”

Capturing the aerial photographs of the “mushroom cloud” was a joint effort between Ferguson and Park. “There’s a lot going on in that little cockpit. I’m simultaneously photographing the action with video and still cameras, reporting the news, coordinating with the news station producers and engineers, and talking to my pilot to reposition our tripod in the sky,” Ferguson says. “Andrew, on the other hand, is basically wrestling a mechanical bull 800 feet above the ground, making calls to other aircraft and control towers, and keeping us safe.” They maneuvered their way strategically through storms and turbulent air in their Robinson R44 Newscopter, being especially cautious given that microbursts and accompanying winds are most hazardous to aircrafts. Ferguson explains: “A lot of times, I push my pilot to get closer to the action. But after years of working together, I know when we are reaching the limits of safely flying the aircraft in stormy, chaotic conditions.” Just as long as he can press the shutter button first! 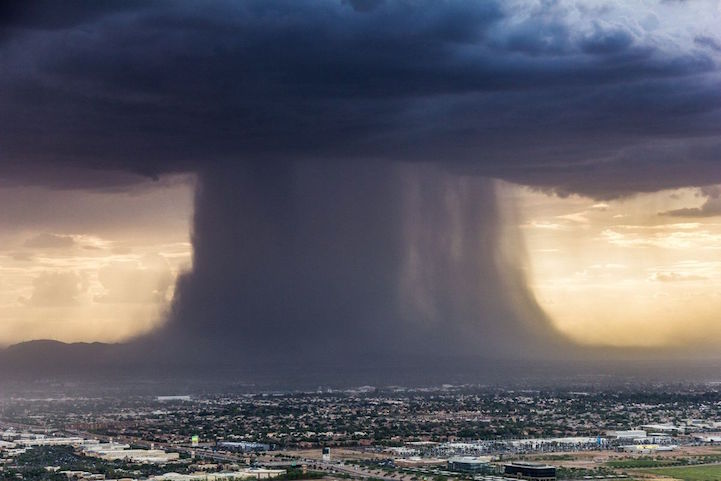 My Modern Met granted permission to use photos by Jerry Ferguson.