This video reminds me of the thread that Charles put up in regards to how we now experience music. Filmmaker Brett Gaylor created a film called RiP: A Remix Manifesto and Boing Boing has remixed it, sprinkling in their own wacky personality. The original film is an “open source documentary” about copyright and remix culture. It's a pretty fascinating look at the ways in which the new generation is mashing up the media and “shattering the wall between users and producers”. Here's Indiewire's review: “Brett Gaylor's “RiP: A Remix Manifesto” studies the paradoxes of copyright law and its discontents, but mainly it's a celebration of remix culture in the twenty-first century. Using music sampling artist Girl Talk as his primary case study, Gaylor explores the ways a new generation of artists have uncovered original methods for creating something new from the fabric of something old–and he slyly ties the trend to a consistent aspect of art history. Touching on infamous situations such as the recording industry's sloppy lawsuits against music downloaders, he surveys a wide variety of discussions taking place in both legal and aesthetic circles.” 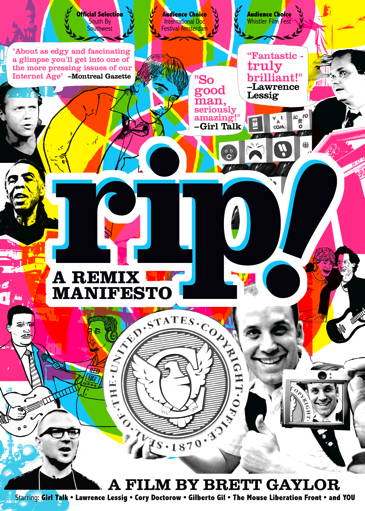 For those who want to create their own screening event, you can do that too! A ReMix Manifesto website