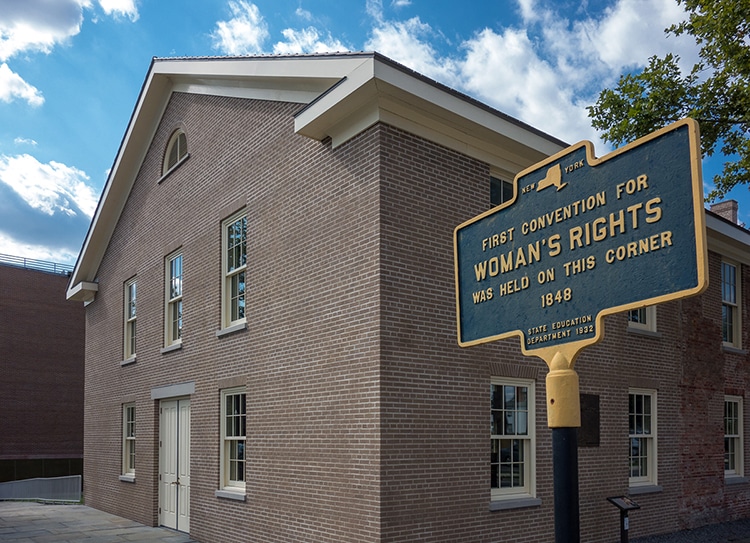 The Wesleyan Methodist Church, constructed in 1843. The building was the site of the first Women's Rights Convention in Seneca Falls, NY. (Photo: Kenneth C. Zirkel via Wikimedia Commons, CC BY-SA 3.0)

Packed into a historic church, speakers protested taxation without representation. Although this may sound familiar, the year was not 1776. Rather, it was 1848 and about 300 delegates of both genders had crowded into the Wesleyan Chapel in Seneca Falls, New York. For several days, this mill town hosted luminaries such as Elizabeth Cady Stanton, Lucretia Mott, and Frederick Douglass. They and other like-minded contemporaries gathered to discuss women's rights in a famous meeting which has since been remembered as the Seneca Falls Convention. The convention would lay out the major goals of the suffrage movement and fight for women's equality before the law.

The right to vote was only one right denied the American women at the time of the convention. Women could not sit on juries, were paid less for their work, and their property (if they owned any in their name) was under the control of their husbands. Much of an American woman's legal position was inherited from the common law doctrine of coverture—upon marriage, women essentially ceased to be independent legal beings. At the time of the convention, many American women were also enslaved and devoid of all rights.

The Seneca Falls Convention was not the beginning of the political discussions about equal rights for women, but it was a seminal meeting of the minds that would define the reform agenda for decades to come.

Read on to learn more about this moment in the fight for equal rights for women. 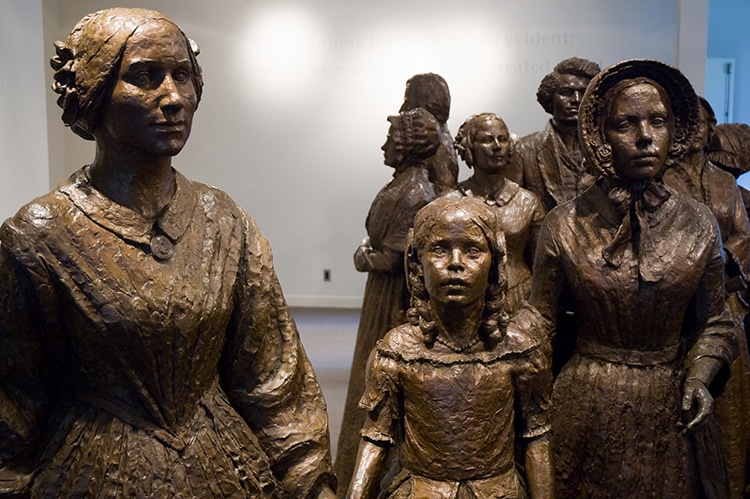 Great Minds Meeting at Seneca Falls in the 1840s 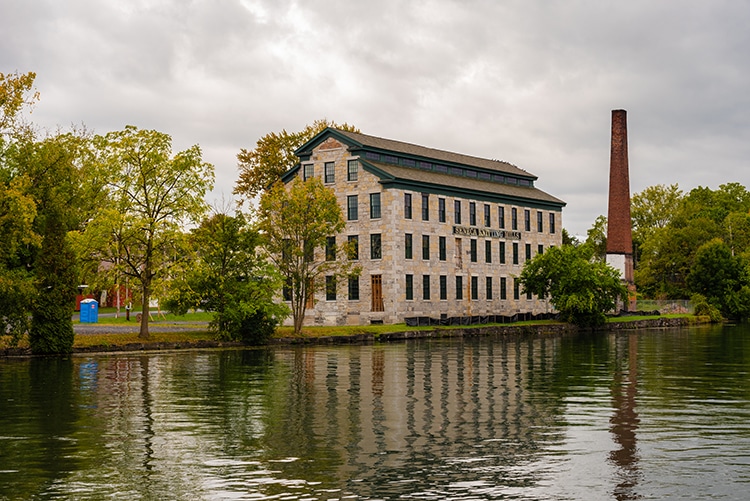 Seneca Falls is a town in the western New York region of the Finger Lakes. The town was incorporated in 1831. Built on the Seneca River, the town became known for the flour mills run on hydropower. The town had an abolitionist presence from its early years; several notable “uppity” women also resided there. Amelia Bloomer—editor of The Lily and namesake of pantaloons—lived in Seneca Falls from the late 1830s to 1853. She attended the Seneca Falls Convention, which inspired her famous newspaper written for women.

In 1847, another prominent woman arrived in Seneca Falls. Elizabeth Cady Stanton and her husband relocated to the town from Boston. There, the two abolitionists had been acquainted with both Frederick Douglass and William Lloyd Garrison. Douglass himself was at the time of the 1848 convention living in nearby Rochester, New York. From there, he published his famous newspaper The North Star. 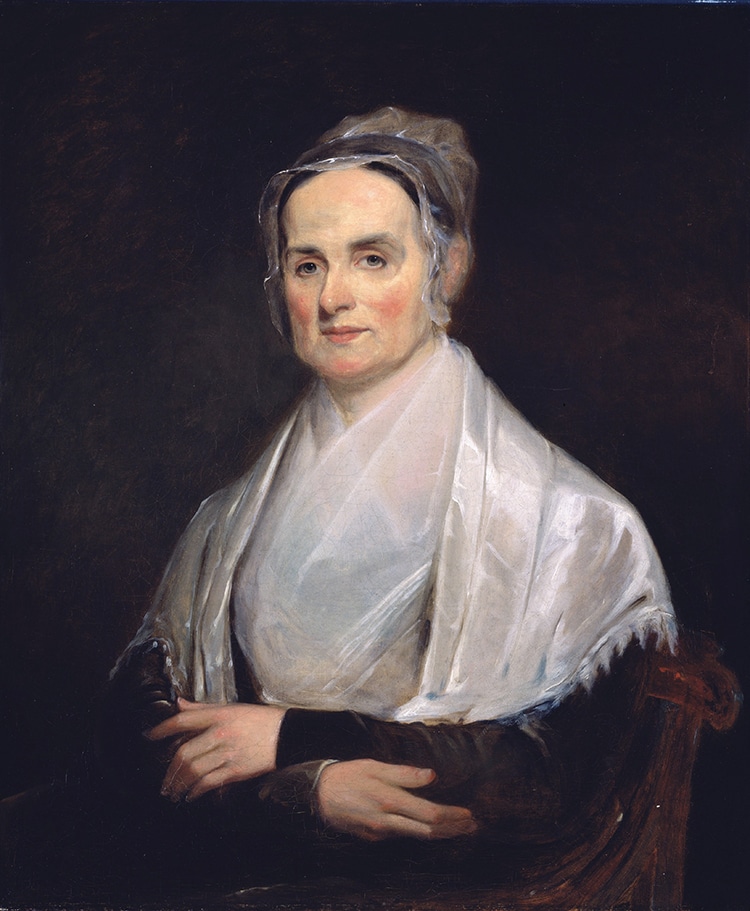 Stanton decided to join with Lucretia Mott and three Quaker women to host a “Woman’s Rights Convention” in her town of Seneca Falls. Stanton and Mott had met at the World Anti-Slavery Convention held in London in 1840. Both women and their respective husbands supported abolition, but no female delegates were allowed in London. This sidelining of female voices rankled. As a Quaker, Mott was renowned for her public speaking abilities—a skill women were not supposed to possess in the 19th century. Planned over tea and announced in the local paper, word quickly spread of the conference to be held in Seneca Falls. 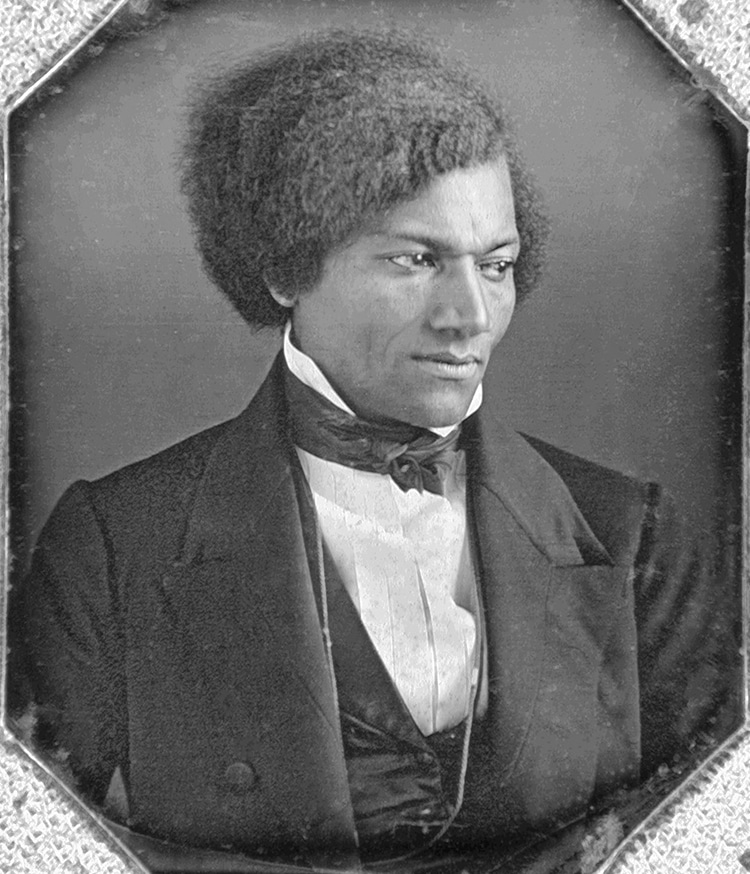 The first day of the conference was open only to women attendees; the second day, to both genders. The meeting was held at the Wesleyan Methodist Chapel—home to a reform-minded congregation. The 300 attendees cramped inside heard from several powerful orators. Mott spoke, compelling to the men in the audience, asking them to support the liberation of their wives and daughters. Douglass (the only Black attendee) argued in favor of women's suffrage, calling women “one-half of the moral and intellectual power of the government of the world.” (Although one might expect Susan B. Anthony to be in attendance, she was not. The famous advocate had not yet met Stanton, although the two would work closely together in later decades.) 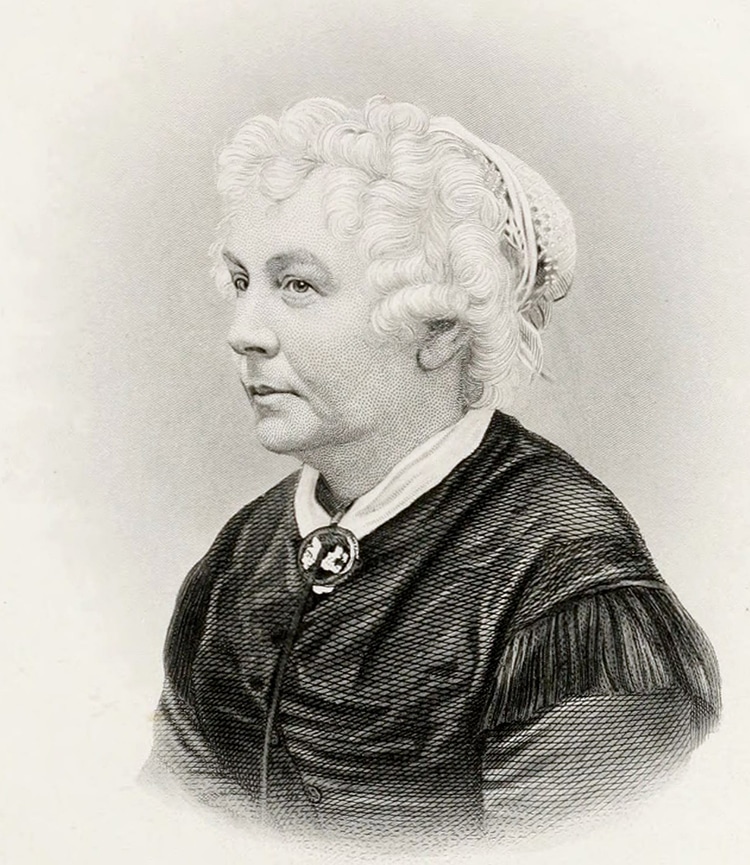 The Declaration of Sentiments

On the first day of the conference, the women collectively edited a text based on the Declaration of Independence. This document would become known as the Declaration of Sentiments. The eloquently worded text framed the convention in both a revolutionary and traditional light—the irony of the words of 1776 showed that America's promise remained unfulfilled for many. The Declaration was followed by a series of resolutions. These included the right to vote—although this resolution passed by a very narrow margin. Many attendees of both genders thought demanding the vote went beyond asking for basic religious and legal equality. Stanton and Douglass were firmly on the side of demanding suffrage. Not all attendees signed the document; 100 did so, primarily women.

The signing of the Declaration of Sentiments at the Seneca Falls Convention in 1848 is considered a pivotal moment in American history. Its text is known from later printings—including one by Douglass in his Rochester print shop. However, the original signed document has been missing for years. Apparently, the document's absence was not fully realized until the Obama administration decided to look for it. They discovered that it was not at the Library of Congress, in the Elizabeth Cady Stanton papers, or in the the archives of the National Women's Rights Park in Seneca Falls.

As far as historians are aware, the document and the meeting minutes from the convention traveled with Douglass back to his print shop in Rochester. Their current location is unknown. The White House blog wrote in 2015: “Here’s where you come in: Let's see if we can find this thing—and unveil other untold stories and histories in the process. Call it a real-life National Treasure, if you like.” So, keep your eyes open for this bit of history.

Legacy of the Convention 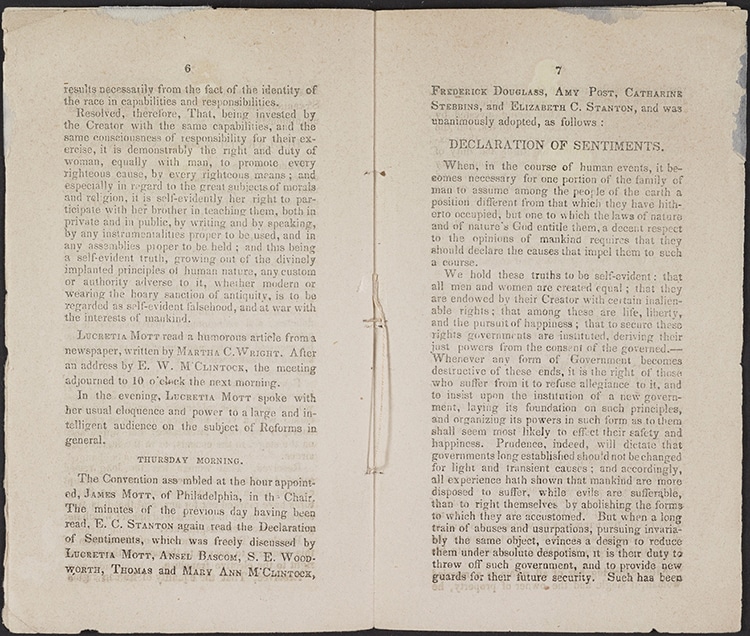 The Seneca Falls Convention made waves almost immediately. In many ways, the suggestion of women's full legal equality (let alone suffrage) was radical. It posed an interesting constitutional question as well. As famed newspaper editor Horace Greely wrote in response to the demands of the convention, “However unwise and mistaken the demand, it is but the assertion of a natural right, and such must be conceded.” The fight for legal equality was largely piecemeal gains over the next century; the right to vote would not be gained until the 19th Amendment was ratified in 1920. Over the course of 72 years after Seneca Falls, arguments would be made positing women's “natural morality” would be a boon to American politics. Others argued voting was simply a human right.

Over the decades after the convention, the crusades for abolition and women's suffrage often shared a support base. However, the Seneca Falls Convention only included the voices and perspectives of white women. Women of color had no voice at the tea table upon which the Declaration was signed. The failure to address the unique struggles of women of color—particularly Black women—was (and is) a longstanding feature in American feminism.

After the Civil War, the 15th Amendment was proposed, which guaranteed the vote could not be denied based on “race, color, or previous condition of servitude.” There was no such protection for sex, however. This caused much a split between factions of the women's rights movement—as leaders such as Anthony and Stanton refused to support the amendment without the inclusion of women. Despite their abolitionist stance before and during the war, the writings of the two prominent suffragists in resistance to the amendment exposed the strand of racism which ran within the movement. 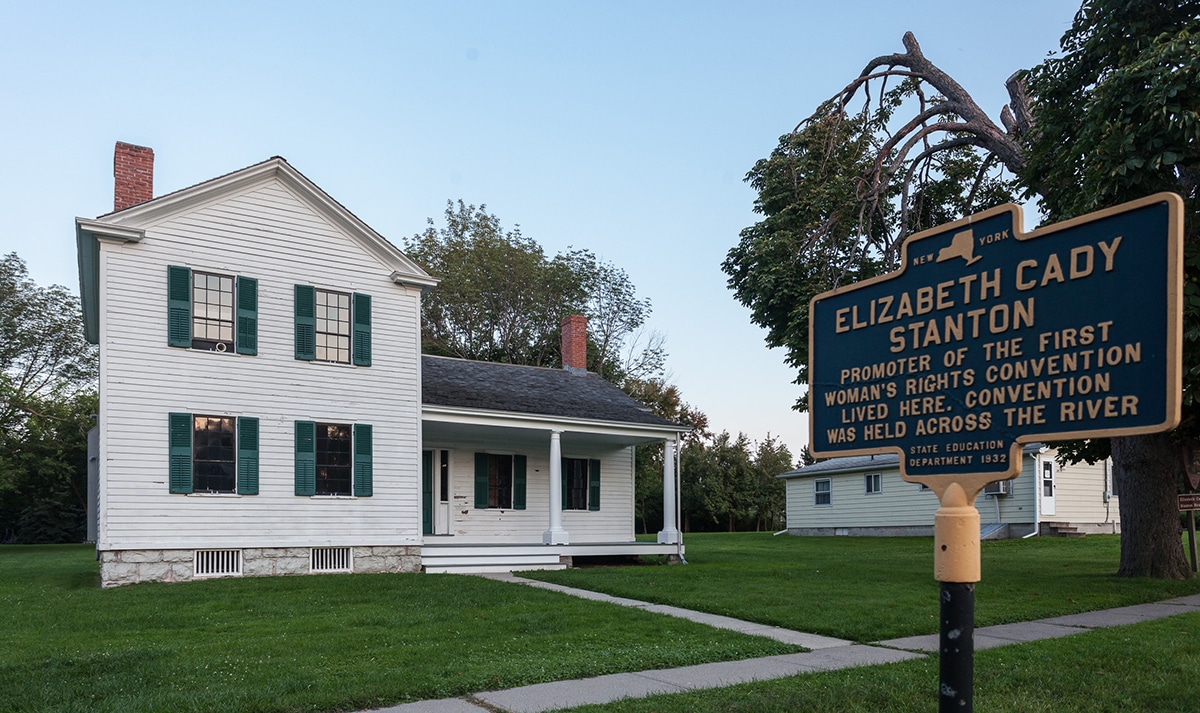 The journey to the vote was a long one for women. While most white women gained the ballot in 1920, American women of color—Black, Asian-American, Latinx, and Indigenous—would have to wait decades to legally and safely claim their constitutional rights. Today, the Women's Rights National Historic Park in Seneca Falls remembers the 1848 Seneca Falls Convention as a critical step towards equality. The park includes the Elizabeth Cady Stanton House, as well as two homes of her co-hosts—the M'Clintock House and the Richard Hunt House. The Wesleyan Methodist Church where the convention was held is also open to visitors.

At a modern visitor center and exhibit building, visitors will be able to view exhibits, as well as a statue entitled The First Wave, depicting many of the famous attendees. From the park, one can follow the Votes For Women History Trail. The trail includes the Susan B. Anthony House in Rochester, as well as her nearby grave. Other historic sites are included, but the trail should not be viewed as a tour through the entirety of suffrage history. As undeniably important as the names of Anthony and Stanton are to women's history, so too are the names of Ida B. Wells and Mary Church Terrell. The Seneca Falls Convention was an important step in the fight for women's rights, but it was only one step in a long and difficult journey to equality for all.