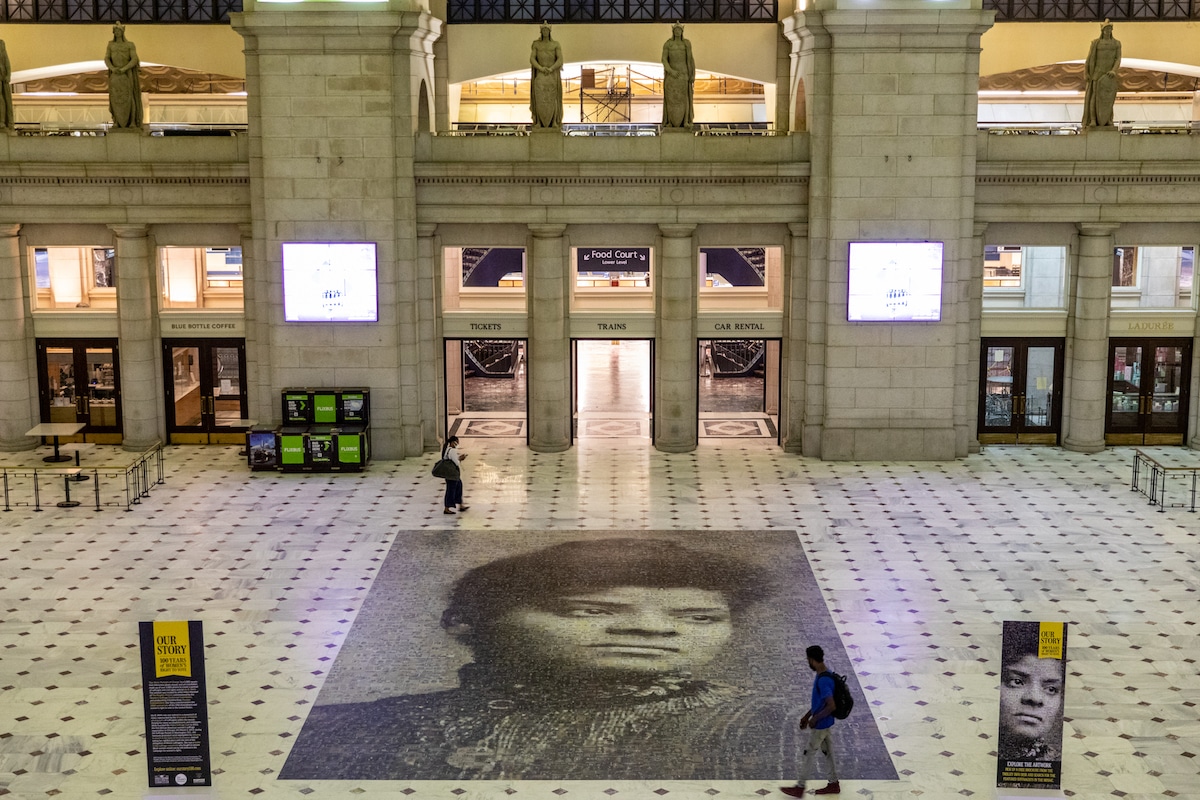 In 1883, on a train from Memphis to Woodstock, Tennessee, a young woman sat peacefully reading her newspaper in her first-class seat. She was then interrupted by the train’s conductor, who was checking tickets. He informed her that the seat was for white passengers only. She was told to vacate and relocate immediately. Her relocation suggestion? A section that was known for rowdy behavior and smokers—something white women at the time wouldn’t dare be subjected to and neither would this young Black woman (Wells). So, the future iconic anti-lynching activist and journalist declined the conductor’s prompts.

In her autobiography, Wells writes: “I refused, saying that the forward car [closest to the locomotive] was a smoker, and as I was in the ladies’ car, I proposed to stay… [The conductor] tried to drag me out of the seat, but the moment he caught hold of my arm I fastened my teeth in the back of his hand.” She goes on to explain the ordeal: “I had braced my feet against the seat in front and was holding to the back, and as he had already been badly bitten he didn’t try it again by himself. He went forward and got the baggageman and another man to help him and of course, they succeeded in dragging me out.” The case went to court and Wells won a $500 settlement (close to $13,000 today). It was a hallmark moment for women’s rights, but particularly for Black suffragettes.

Now, Wells has gotten the recognition she deserves for her act of bravery and her defiant form of activism. From August 24-29, the enthralling 25 ft by 40 ft (1,000 square feet) mosaic titled Our Story: Portraits of Change was displayed at Union Station in Washington, DC. It revealed a grand portrait of Wells, made of photos and letters. British artist Helen Marshall constructed the mesmerizing piece (commissioned by the Women’s Suffrage Centennial Commission, and produced by Christina Korp, Purpose Entertainment) which included compiling all of the photos and stories that each photo represents.

My Modern Met had the privilege of speaking to Marshall about this project and reflecting on her thoughts about women’s rights and Ida B. Wells. 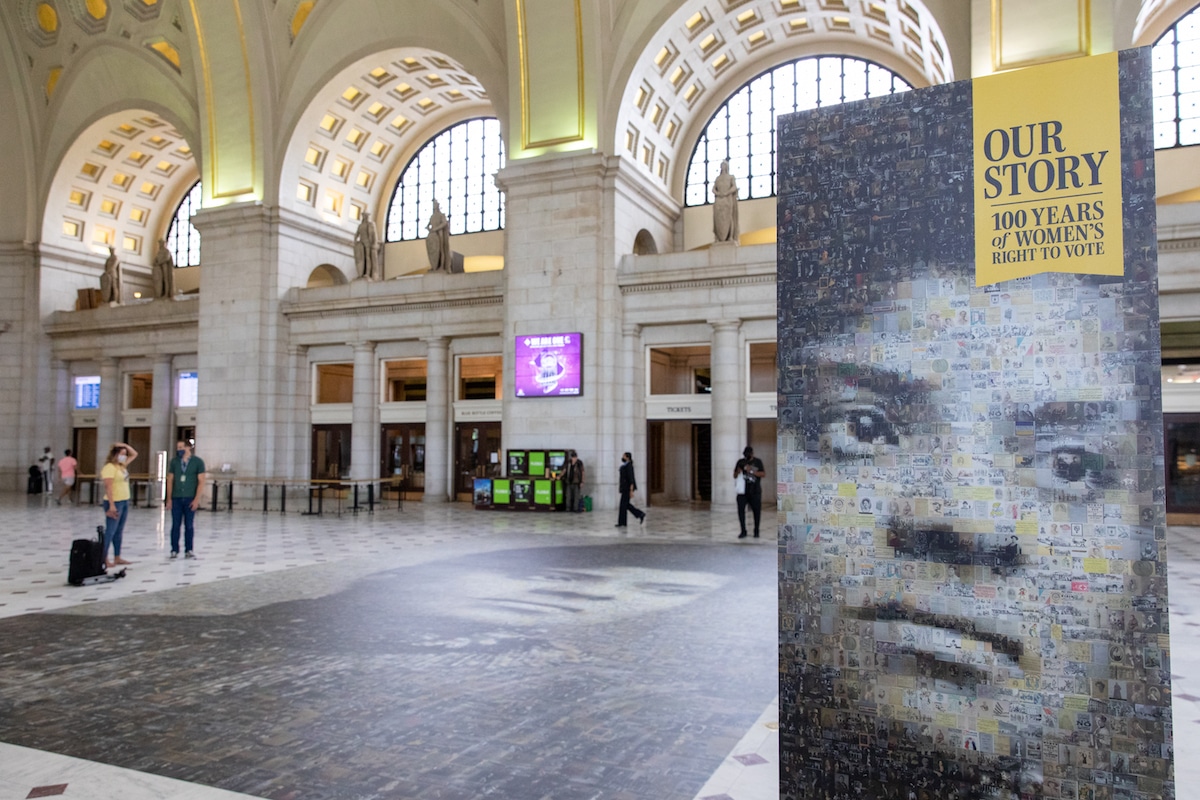 What can you tell us about Our Story: Portraits of Change?

The Our Story mosaic depicts a portrait of suffragist and civil rights activist Ida B. Wells. Wells was a leader in the suffrage movement who fought to ensure Black women would not be left behind in the campaign for women’s rights. Although her fight happened 100 years ago, her story is still prominent today. Her leadership and courage perfectly represents the spirit of the American women’s suffrage movement. In the current climate, many people can relate to her story of determination in the face of formidable obstacles, so it’s not only Ida at the centre of this story, but rather all women past and present.

How long did this project take to complete?

We have been working on the project since last November, but it stems from my 2018 project in the UK—The Face of Suffrage—which celebrated 100 years since British women first won the right to vote. 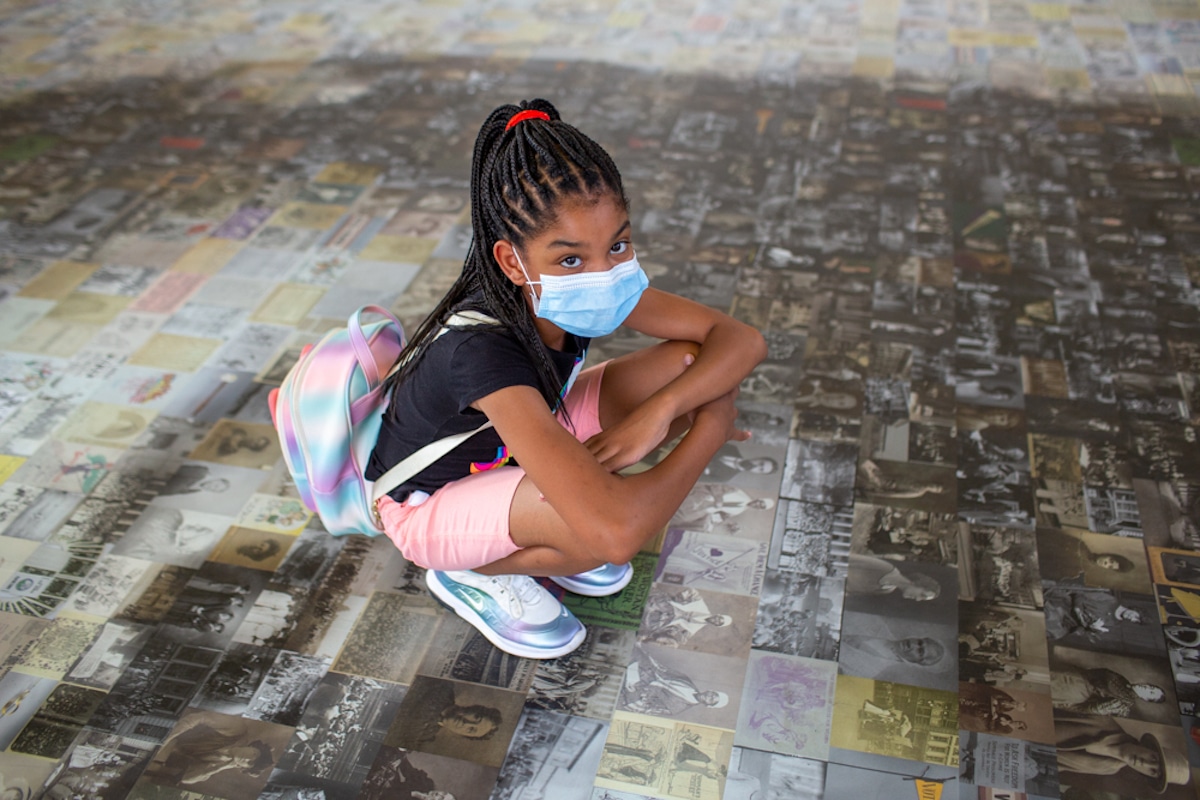 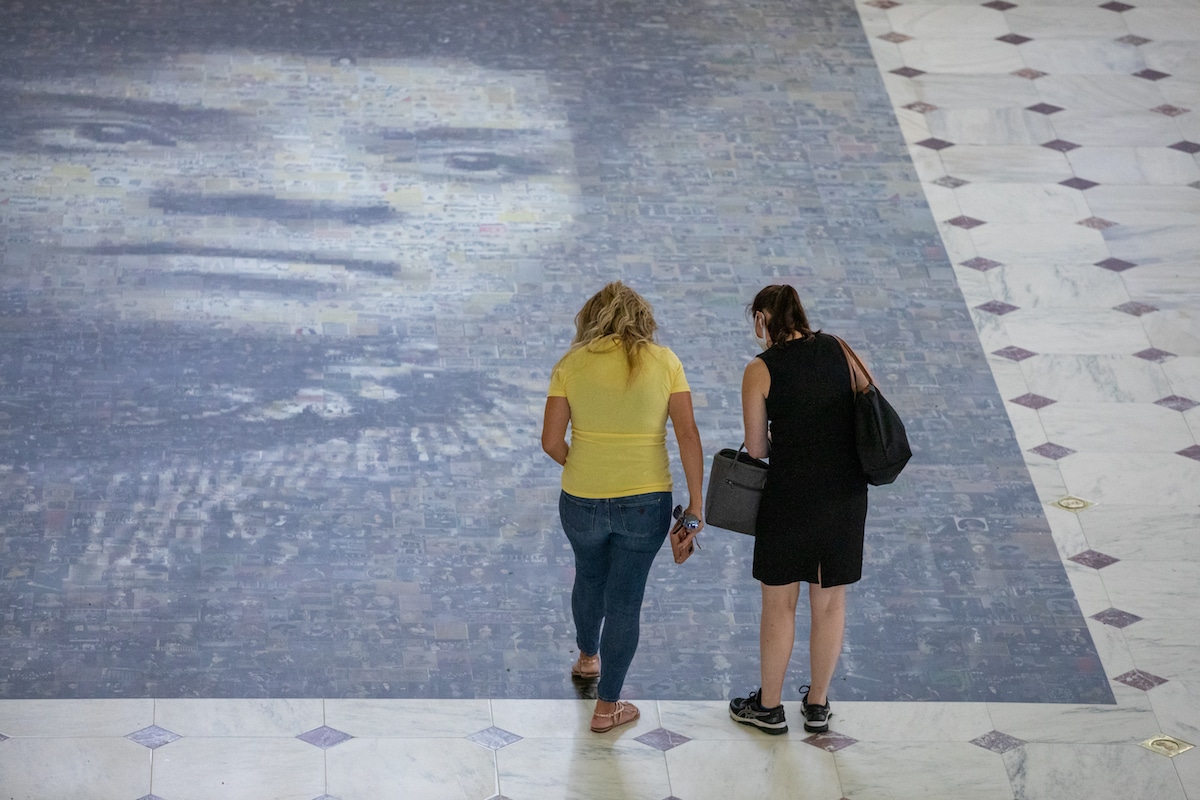 I consider myself to be an artist using tools of the time. A few hundred years ago, people would work in their studios with paint and a canvas. I work in my studio with computers and algorithms to create giant photo mosaics. The process is just the same as painting or traditional art because every picture is looked at and purposefully chosen, and I make many versions of the final artwork in my studio until I am happy with it. It is like making a digital painting—you cannot always predict the outcome. We selected photos from the public domain historical archives and went through every single one, hand-placing around 50 unique portraits and stories to make the artwork interactive.

I have been making these projects for 20 years, the main idea is that every picture tells a story and that every individual picture counts. When a community participates by sending us their photos and stories it is truly participatory and inclusive. In this case, we used historical archives and brought back to life the stories of the past. The final work is very important, we spend a long time consulting our printers and installation team to ensure that the final piece is a quality fit for a gallery or museum. 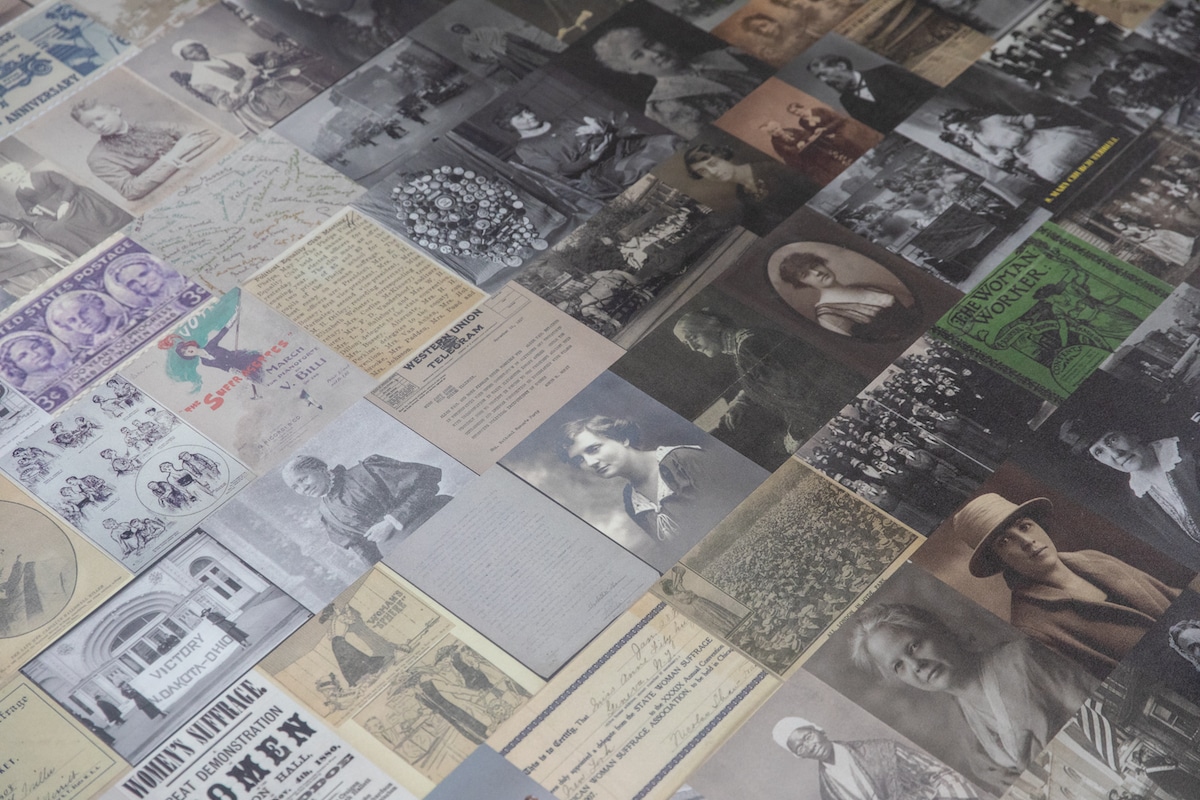 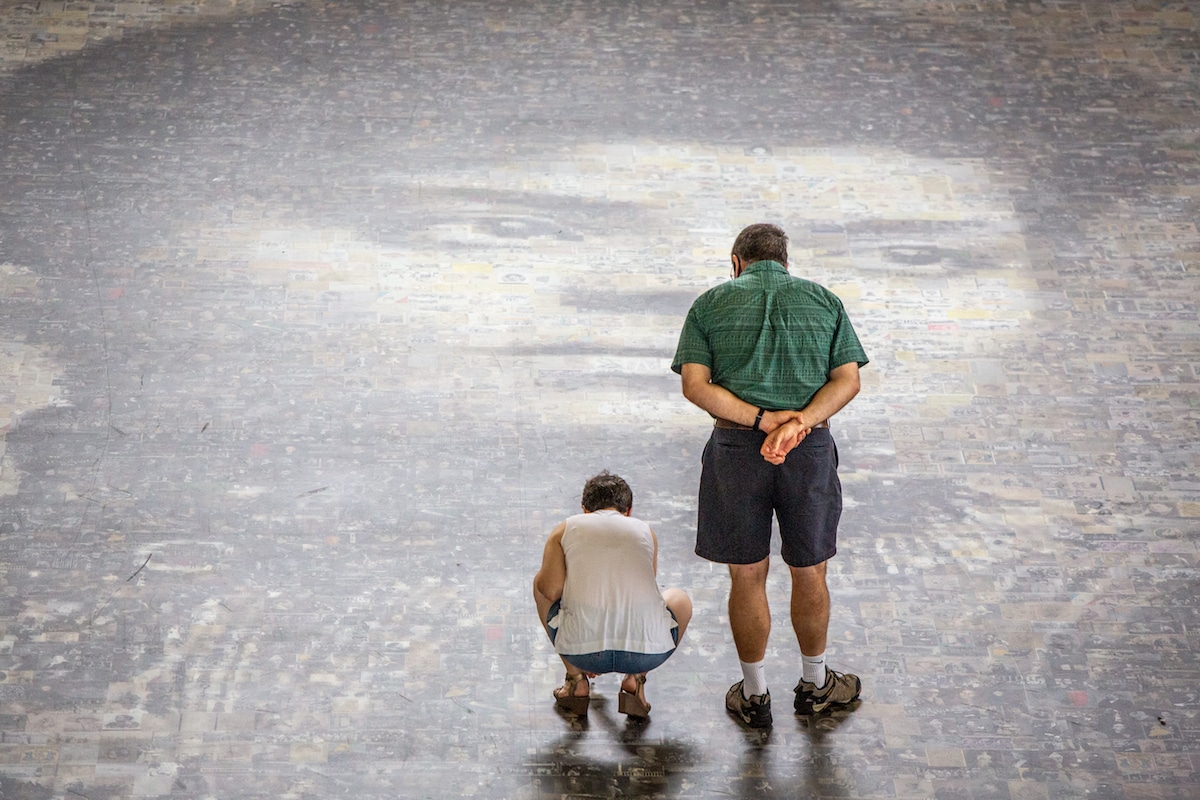 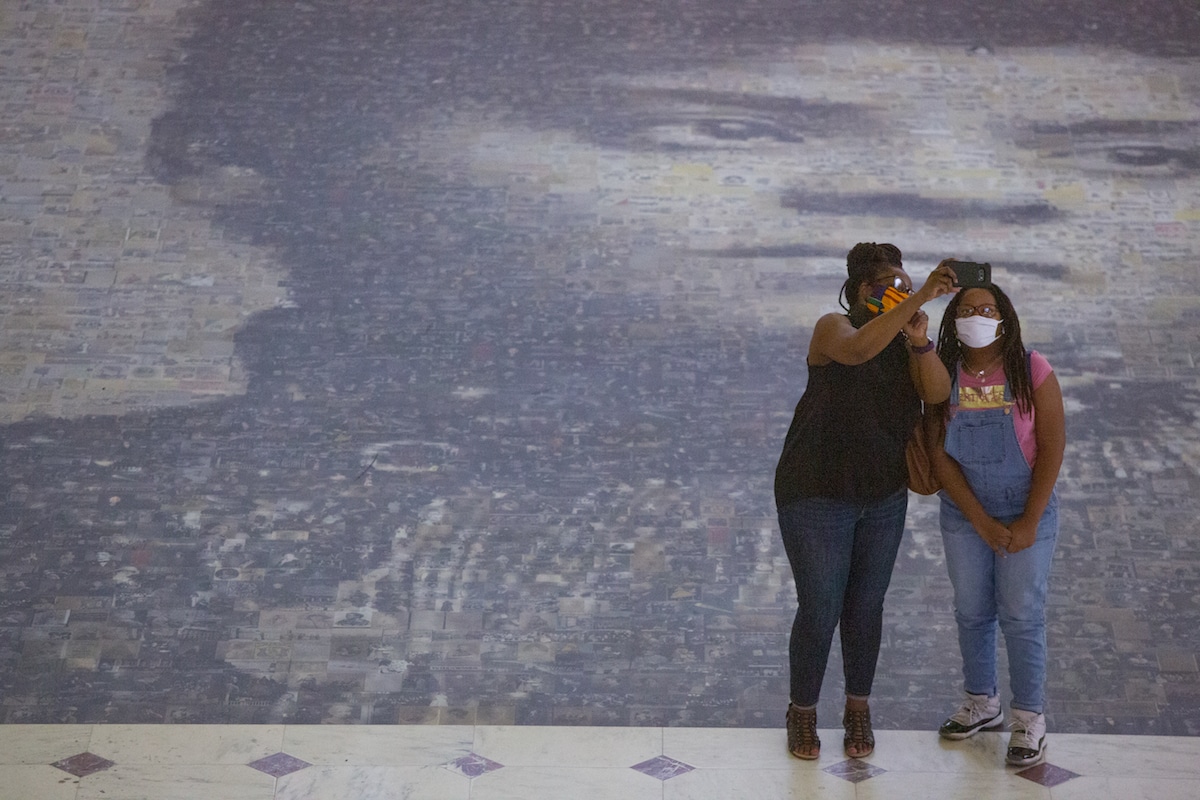 Were there any surprises/discoveries you had along the way?

In 2018, we created the Face of Suffrage artwork in the United Kingdom to celebrate 100 years since British women first won the right to vote. The floor-based photo mosaic was made up of over 3,700 pictures of women involved in the suffragette movement and of females today using photographs submitted by the public to be part of the commemoration. When viewed from above, it showed Hilda Burkitt, who threw a stone at the Prime Minister's train as it pulled away from Birmingham New Street Train Station.

During our research for the Our Story project, we discovered that Ida B. Wells had, too, been to Birmingham, speaking twice to the Young Men’s Christian Assembly Rooms. She has a memorial plaque at the community center in which she stayed at in 1893. Wells also had a strong connection to the railway industry like Hilda—in 1883, she was forcefully pulled from her train carriage as it was “reserved for whites only.” Wells refused to move and bit the conductor as hard as she could.

It was a wonderful surprise to find these two projects not only were linked by the centennial, but also by their defiant stories that both happened in a train station. 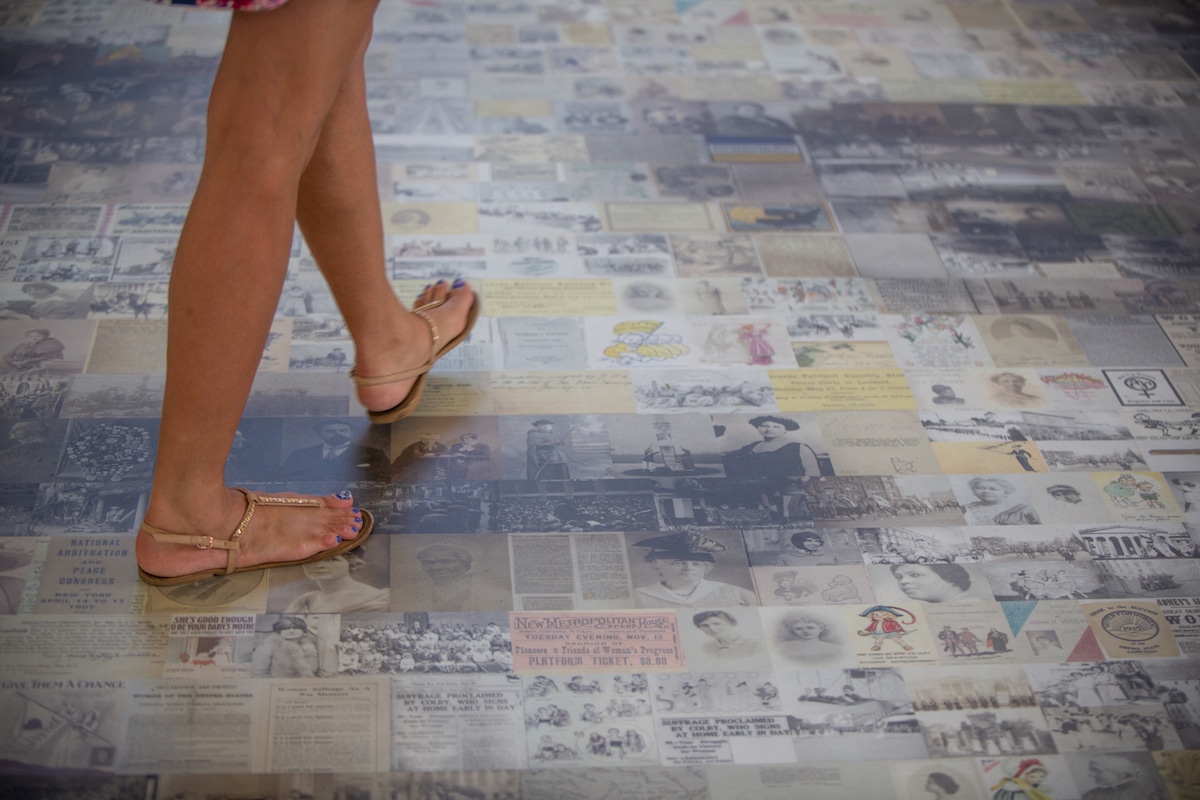 What do you hope people take away from this installation?

I hope people will feel inspired, exhilarated, and have a sense of hope during these challenging times. Pictures are very powerful and can bring about a range of emotions.

What was really special about this project was putting it in a public place rather than a gallery. People who would not usually walk into an art gallery or museum had the chance to see it and learn something new. I hope it will encourage many people to see art in a different way—an accessible and inclusive piece that everyone is welcome to explore. I also hope this project will inspire people to learn more about the suffrage movement and how these women fought for future generations! 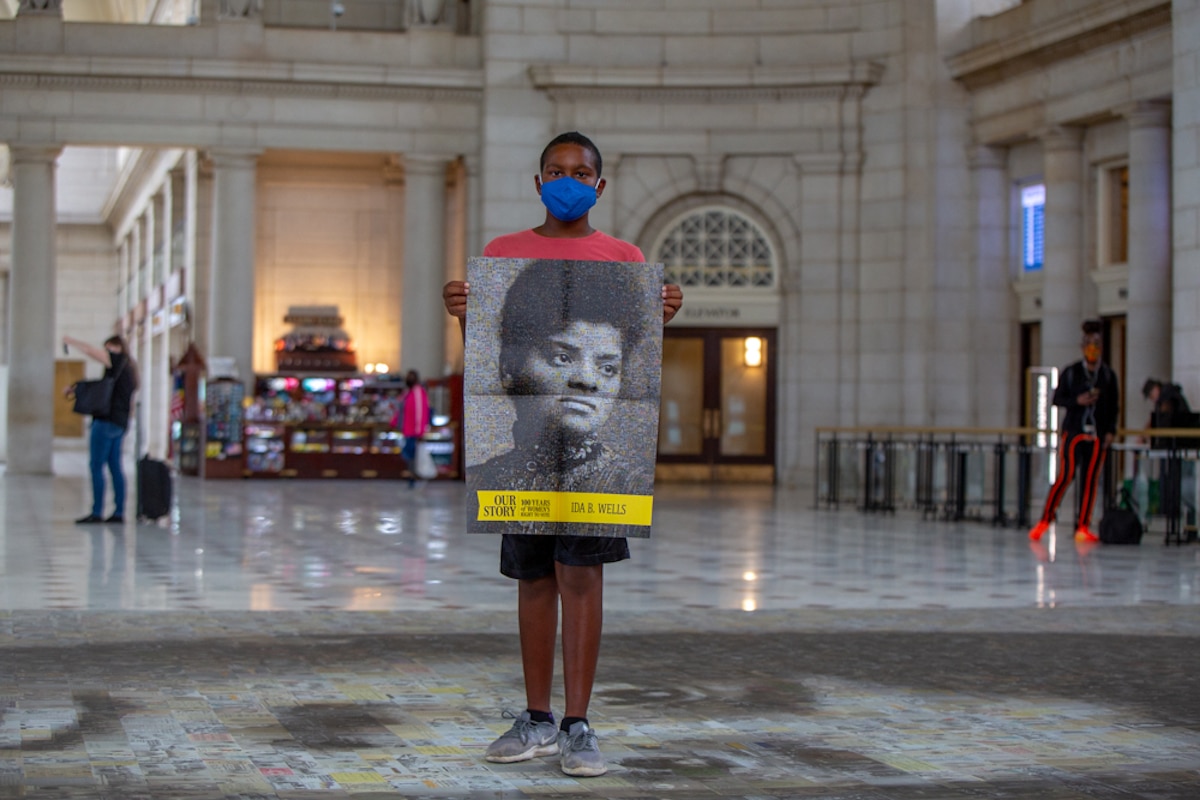 The feedback has been overall very positive. We’ve had thousands of online visitors explore the artwork and lots of encouraging comments saying how moving seeing the artwork was. Debate had been sparked around whether or not it was appropriate to have Well’s face on the floor to be walked on, but we wanted this mosaic to be a grand, impactful, and immersive image. This would not have been possible if it was on the wall.

During the project, we met Michelle Duster, great granddaughter of Ida B. Wells, and we are now working with her to try and find a legacy for this piece so it can be seen and enjoyed for years to come. 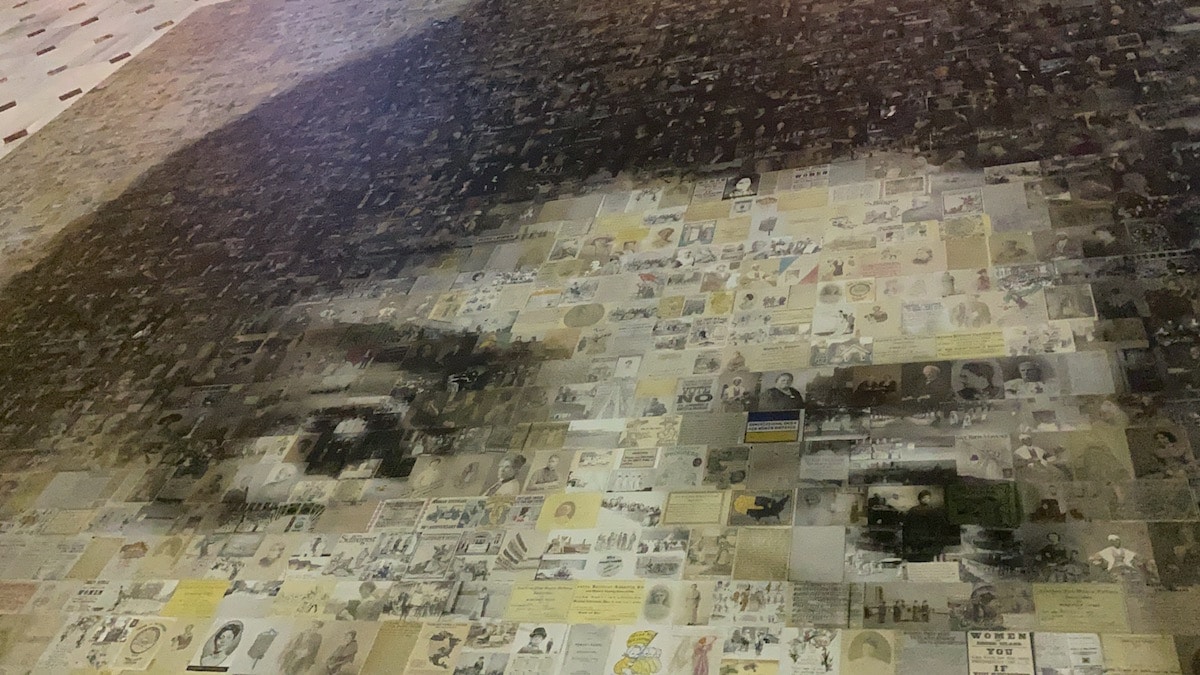 My Modern Met was granted permission to feature photos by Helen Marshall.

Want to help celebrate Ida B. Wells? Share
Like My Modern Met on Facebook
Get Our Weekly Newsletter
Become a
My Modern Met Member
As a member, you'll join us in our effort to support the arts.
Become a Member
Explore member benefits