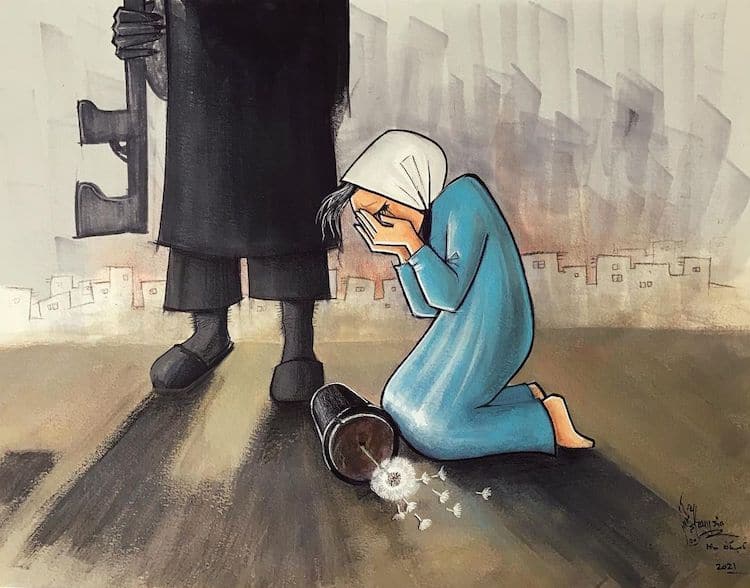 In Afghanistan, there is real fear and concern as the Taliban take back control of the country after 20 years. Of particular concern is how women will be treated, given the brutality they faced during the Taliban's last regime. Shamsia Hassani, who is Afghanistan's first female street artist, is turning her emotions into art and has published a series of heartbreaking images on her social media.

Hassani was born as a refugee in Iran in 1998, when the Taliban was still in control of Afghanistan. She returned to her home country in 2005, determined to make a difference and hoping to use art to cover the scars of war. After finishing her visual arts degree at the University of Kabul, she became part of the faculty as a fine arts lecturer and sculpture professor. As a street artist, she dared to bring her work—which mainly focuses on women—into public space. In doing so, she became lauded internationally as an example of a new generation of trailblazing Afghani women.

In a 2013 interview, she discussed her choice to put women at the forefront of her art. “In the past, women were removed from society and they wanted women to stay only at home and wanted to forget about women. Now, I want to use my paintings to remind people about women,” she shared. “I have changed my images to show the strength of women, the joy of women. In my artwork, there is lots of movement. I want to show that women have returned to Afghan society with a new, stronger shape. It’s not the woman who stays at home. It’s a new woman. A woman who is full of energy, who wants to start again. You can see that in my artwork, I want to change the shape of women. I am painting them larger than life. I want to say that people look at them differently now.” 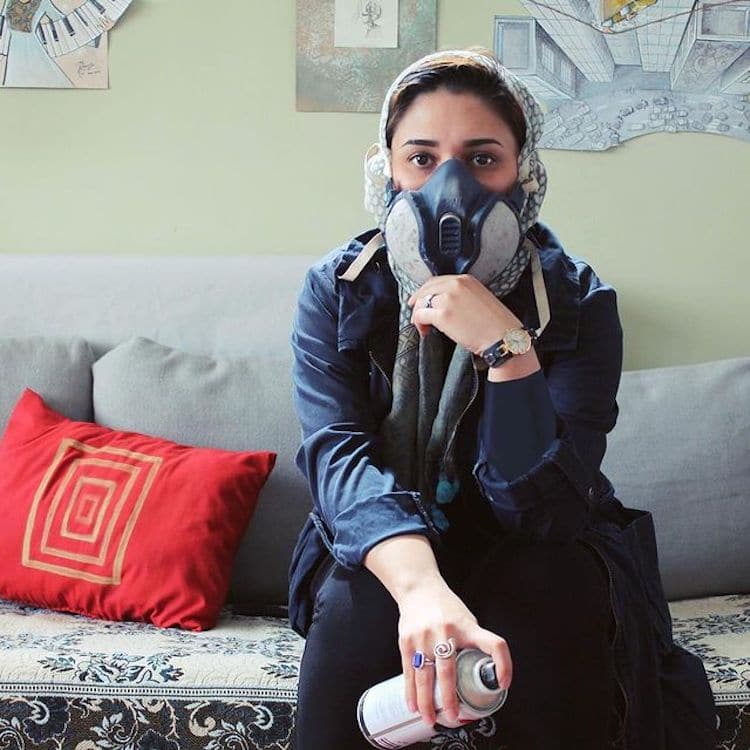 Now, with women once again in a precarious position, the color seems to drain from Hassani's latest paintings. With titles like Death to Darkness and Nightmare, there is no mistaking how she feels. In her pieces, the Taliban is shrouded in darkness, looming over the scene as menacing figures. The women in her paintings are dressed in blue, either with a headscarf or a burqa. In two pieces there is a black pot with a dandelion. Whisps of the dandelion fly away, perhaps symbolizing a wish that is blowing out of reach.

While the Taliban's spokesperson Zabihullah Mujahid said at a recent public appearance that women would be respected under their rule, no specifics were given. At the moment, according to the Associated Press, women are being told to return to school and work, though there are reports that contradict those statements. Many women, no matter what the Taliban says publicly, are fearful of their future and given the Taliban's past behavior, they have just cause for concern. A group of women in Kabul took to the streets to protest, demanding that they not be “erased” from public life.

In the meantime, Hassani continues to produce new work, seemingly from her studio in Kabul. In doing so, she's ensuring that her voice, and that of Afghani women, will continue to be heard. If you are interested in helping women in Afghanistan, there are several organizations to consider, including Women for Afghan Women and Flyaway: Emergency Afghan Rescue Mission. That mission is collecting donations to conduct emergency rescue flights for those who wish to leave the country.

Afghanistan's first female street artist Shamsia Hassani has been publishing her heartbreaking response to the Taliban coming into power. 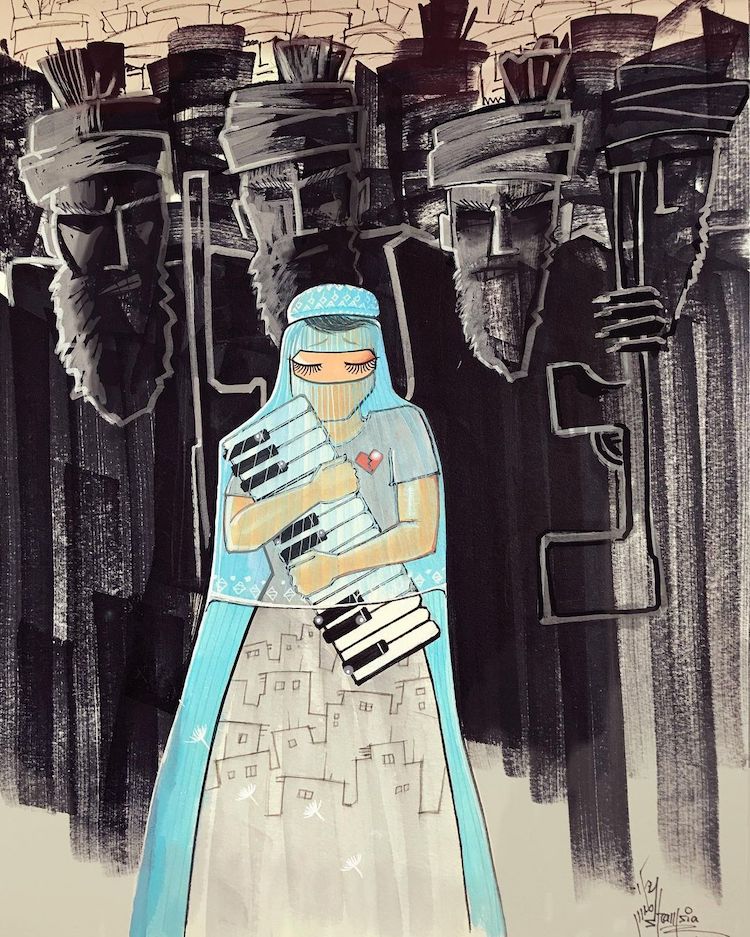 Titled Nightmare, one artwork shows the Taliban as dark figures emerging from the shadows. 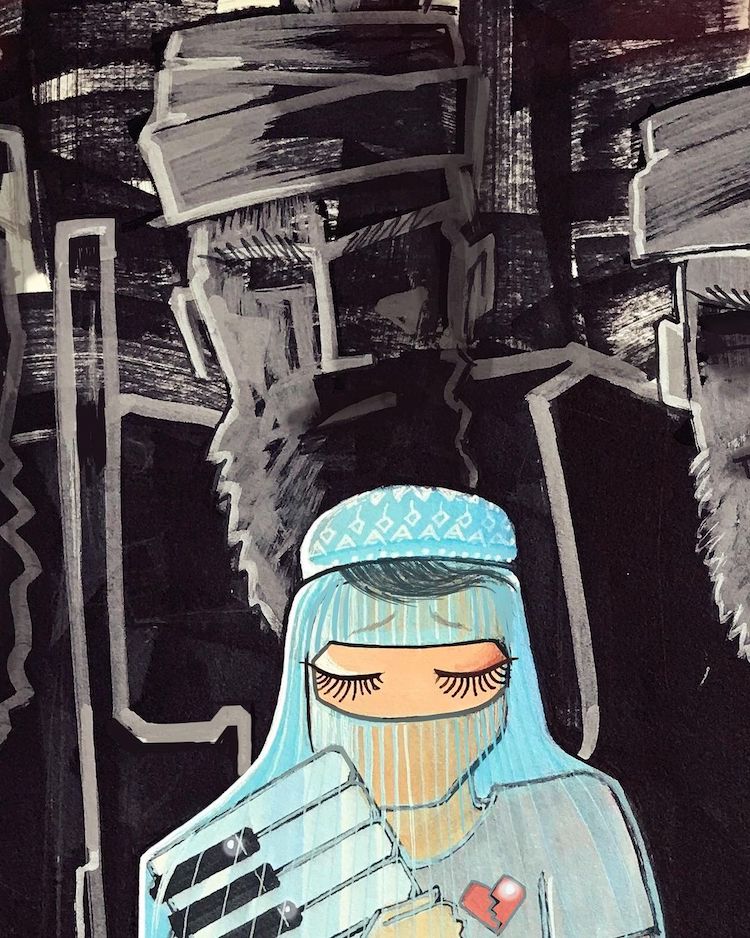 Hassani, an Afghani refugee who returned to her country in 2005, continues to post art expressing her fears via her social media. 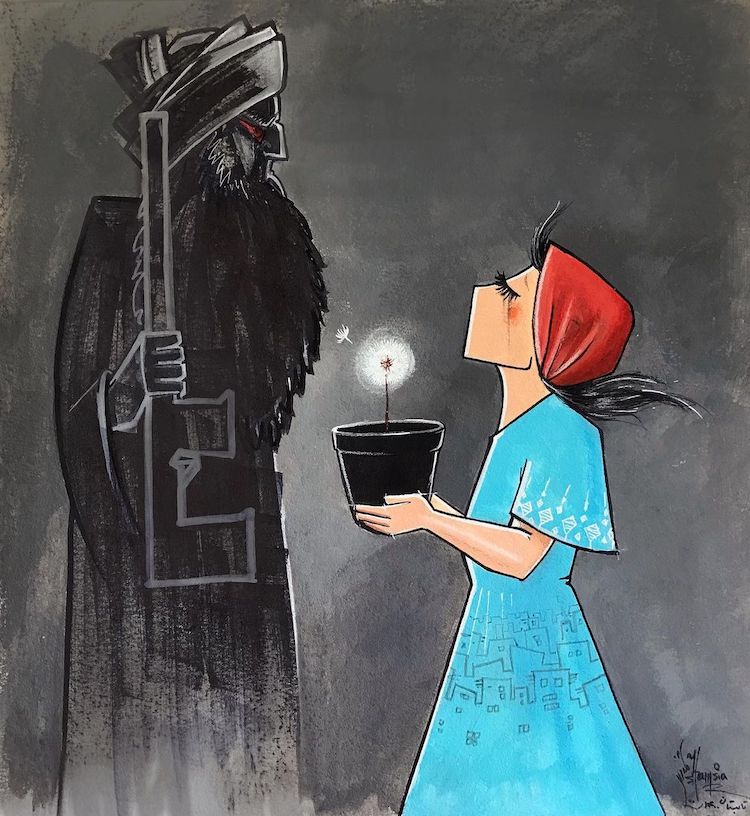 All images via Shamsia Hassani.