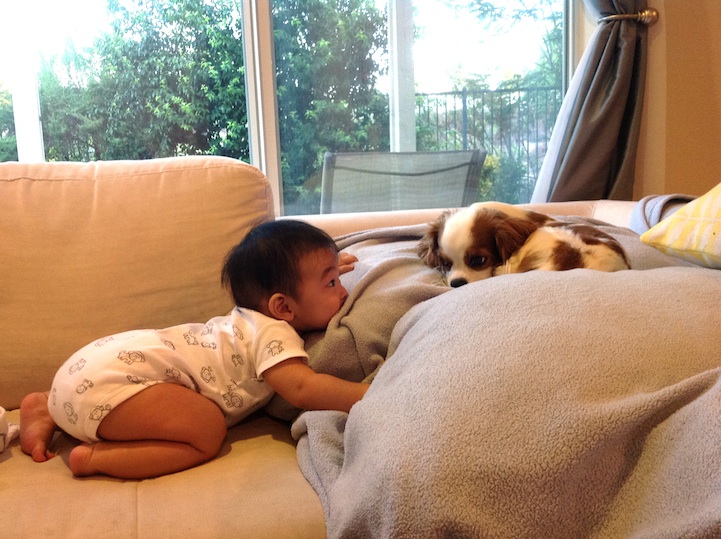 Though it may be hard to believe, it's been almost five years since we started My Modern Met. (We launched in May 2008.) Though I'm not a photographer by trade, you've trusted in me and my team to deliver some of the best art and photography out there today. For the most part, we've kept our personal lives private but if you do a quick search, you could find us on any number of social networks.

A few nights ago, on a whim, I decided to put up a picture of my son on Reddit. (As you may all know, Reddit is a behemoth on the Internet, millions visit the site every day to catch up on the latest news or to just be entertained.) I titled it: The moment our 5-month-old suddenly realizes we have a puppy. The photo, shot on my iPhone, captured my then 5-month-old son curiously peeking over a blanket-wrapped sofa pillow, gazing into the eyes of my puppy, Fozzy. Before that day, he didn't pay attention to the two dogs we've had in our house since even before he was born, but something suddenly clicked. Now, he just can't get enough of little Fozzy.

To my complete and utter surprise, as well as my husband's (who I woke up rather excitedly violently at 7 am), the next morning I found the photo on the front page of Reddit. Now, a day later, it has over 2,000 points and over 200 comments. The photo, which I uploaded to Imgur, has now been viewed over a half a million times.

I wanted to share this story because it just shows that when you put yourself out there, it's scary but surprisingly fulfilling. Not only did I get to share a tiny piece of my world, I got to write back and forth with other Redditors, swapping stories or answering questions that could potentially impact someone's life. I've also gained a deeper appreciation for all the artists and photographers we've written about over the years. To share a piece of you, day in and day out, takes an incredible amount of courage. Not knowing how the public will react, that fear could paralyze you. However, you put aside that fear for us so that maybe someone somewhere will be changed by it. Thank you, from the bottom of my heart, and on behalf of all the viewers that visit us each day right here on My Modern Met.