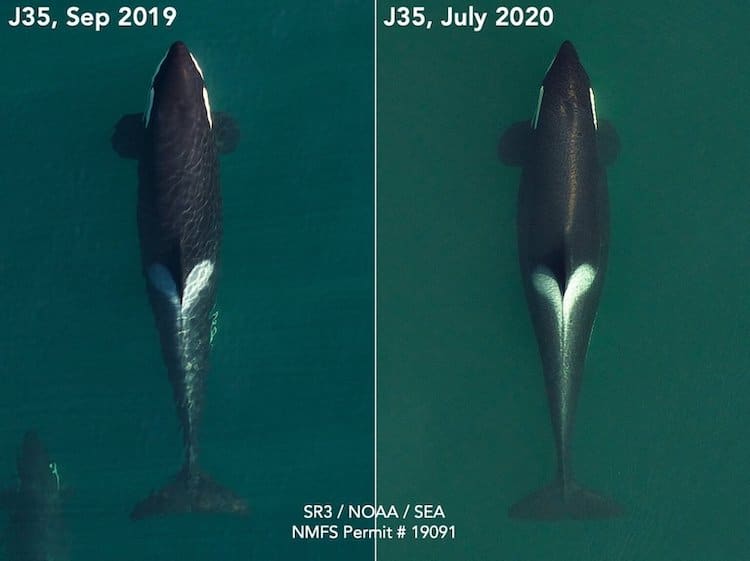 Aerial image of Tahlequah showing the development of her pregnancy. (Photo: SR3 and NOAA’s Southwest Fisheries Science Center in 2019 / SR3 and SEA in 2020)

In 2018, a killer whale named Tahlequah gained global attention as she mourned the loss of her calf, which lived only 90 minutes after it was birthed. She carried her child on her back for 17 days—a gesture that tugged at heartstrings around the globe. But now, there is some good news. Tahlequah is pregnant once again.

The orca was recently photographed by researchers from Southall Environmental Associates (SEA) and SR3, two non-profits that focus on marine life conservation. The groups regularly take photographs of the endangered Southern Resident killer whale population in the Pacific Northwest and came across several pregnancies. Tahlequah is among the killer whales whose change in shape reveals that she's in the late stages of pregnancy, which typically lasts 17 to 18 months.

Scientists are cautiously optimistic that this time Tahlequah, also known at J35, will get her happy ending. Unfortunately, the reality is that unsuccessful pregnancies are becoming more common, which isn't helping their declining numbers. In fact, two-thirds of orca pregnancies don't have a successful outcome. It's unfortunate news for the population, which is down to just 73 whales, meaning that every life is critical. 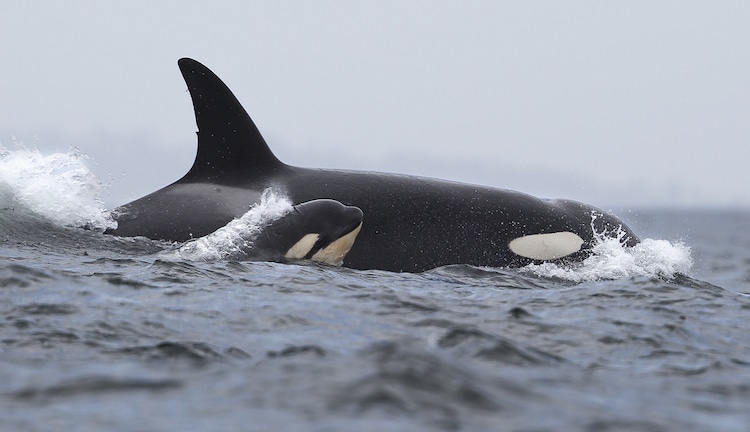 “It’s easy to celebrate a pregnancy, but the fact is that it’s quite possible this won’t result in a healthy live birth,” says Deborah Giles, a research biologist with the University of Washington’s Center for Conservation.

Researchers believe that poor nutrition is contributing to the rise in stillbirths. Part of the issue is that killer whales feed exclusively on Chinook salmon. Overfishing and mismanagement of fisheries have caused a sharp decline in the salmon population, taking away this vital resource for the orca. Researchers have also found that stress from hunger may also be a reason for poor reproduction.

Once the calves are born, they are bonded as a family for life and join the pod permanently. In fact, Tahlequah's demonstration of grief over her last pregnancy shows just how strong the maternal bond becomes through the year and a half pregnancy. Scientists are asking for the entire community to do their part in making these pregnancies a success by keeping boating to a minimum and allowing for a calm environment—this could make all the difference.