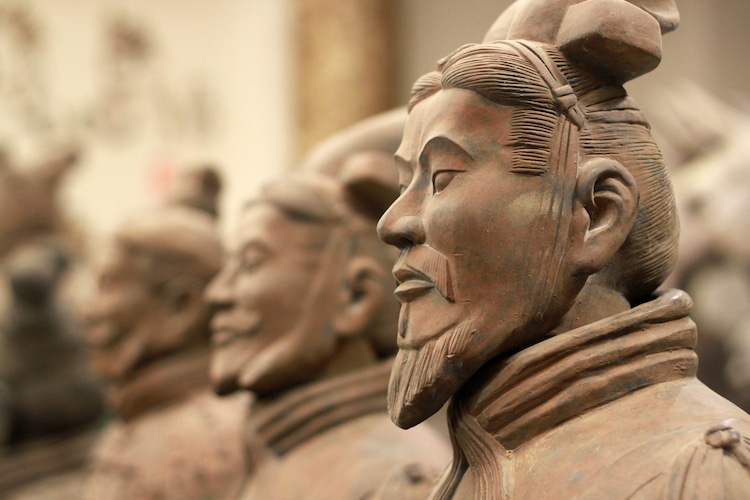 Art history is full of treasures that have yet been uncovered. Even after thousands of years, we continue to find remnants of past civilizations. In 1974, farmers digging a well in a field in North China, east of Xi’an, stumbled upon a pit containing 7,000 life-size terracotta statues. The site was soon identified as the burial place of Emperor Qin.

In 246 BCE, Qin Shi Huang, took the throne at only 13 years of age, as China's first emperor. He is credited for several innovative accomplishments as ruler of the first Imperial Empire. Some include standardized scripts and coins, the continued construction of the Great Wall, and the overall expansion and unification of the state.

To celebrate his triumphs and immortalize his life, he ordered the construction of a necropolis in Xi'an, a region rich in gold. He desired an intricate mausoleum filled with precious possessions—some including rare jewels—as well as thousands of custom-made terracotta soldiers to protect him in the afterlife.

Though 7,000 laborers dedicated decades to constructing the larger-than-life tomb and necropolis, the site was left unfinished when Qin died in 210 BCE.

Learn how more than 7,000 Terracotta Warriors immortalized Emperor Quin with this infographic compiled by My Modern Met.

Emperor Qin Shi Huang was buried with 7,000 Terracotta Warriors sworn into protecting him in the afterlife. Learn more about this fascinating slice of history.

Love history? Share
Like My Modern Met on Facebook
Get Our Weekly Newsletter
Become a
My Modern Met Member
As a member, you'll join us in our effort to support the arts.
Become a Member
Explore member benefits
Love history?