The 27 Year Old Speechwriter That’s the Man Behind the Man: Jon Favreau 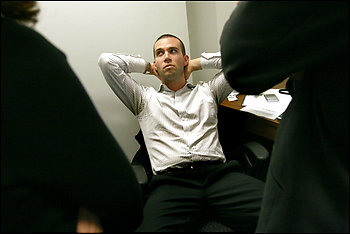 Hear the name Jon Favreau and you might think of Vince Vauhn's counterpart in the classic movie Swingers. But look a little closer and you'll instead find a 27 year old speechwriter who's words mean much more than yours or mine. As Obama's chief speechwriter he's in charge of crafting some of Obama's most important speeches, including his inaugural speech that's set to be delivered on January 20th. In reading the article you'll find a guy who's been serendipitously cast into the limelight but instead of buckling under the immense pressure, he's handling it with panache. Washington Post article with some excerpts: The responsibility “He looks like he's in college and everybody calls him Favs, so you're like, ‘This guy can't be for real, right?' ” said Ben Rhodes, another Obama speechwriter. “But it doesn't take long to realize that he's totally synced up with Obama. . . . He has access to everything and everybody. There's a lot weighing on his shoulders.” Still more daunting is the list of things Favreau can't think about as he writes the inaugural. He went for a run to the Lincoln Memorial last month and stopped in his tracks when he imagined the mall packed with 3 million people listening to some of his words. A few weeks later, Favreau winced when Obama spokesman Bill Burton reminded him: “Dude, what you're writing is going to be hung up in people's living rooms!” “If you start thinking about what's at stake, it can get paralyzing,” Favreau said. The relationship In four years together, Obama and Favreau have perfected their writing process. Before most speeches, Obama meets with Favreau for an hour to explain what he wants to say. Favreau types notes on his laptop and takes a crack at the first draft. Obama edits and rewrites portions himself — he is the better writer, Favreau insists — and they usually work through final revisions together. If Favreau looks stressed, Obama sometimes reassures him: “Don't worry. I'm a writer, too, and I know that sometimes the muse hits you and sometimes it doesn't. We'll figure it out together.” The big break They stumbled upon it by accident in 2004, when Obama, just elected to the Senate, needed to hire a speechwriter. He brought Favreau, then 23, into the Senate dining room for an interview on his first day in office. They talked for 30 minutes about harmless topics such as family and baseball before Obama turned serious. “So,” he said. “What's your theory on speechwriting?” “A speech can broaden the circle of people who care about this stuff,” Favreau said. “How do you say to the average person that's been hurting: ‘I hear you. I'm there. Even though you've been so disappointed and cynical about politics in the past, and with good reason, we can move in the right direction. Just give me a chance.' ” “I think this is going to work,” Obama said. The pressure – the highs and lows: All told, Favreau spent more than 18 months on almost constant deadline, staying up until 5 a.m. during the financial crisis to craft speeches for the next day and waking up at 8 a.m. to obsess over the daily tracking polls, which he started calling “daily crack.” When the pressure wore on Favreau, he unwound like a 27-year-old, sending prank e-mails to friends at the Obama offices or playing the video game Rock Band in the Lincoln Park group house he shared with six campaign staffers. He visited Axelrod's office and sought advice. He called his best friend, Josh Porter, when he felt ready to break down. “A few times he called at midnight, sounding just done,” Porter said. “He would be like, ‘I don't know if I can do this anymore. I'm in over my head. I'm starting to freak out.' ” But there were also moments of euphoria, when Favreau would catch himself choking up while riding in the motorcade or rehearsing with Obama backstage. Before he entered Grant Park on election night, to stand in the VIP section with his parents and younger brother to hear Obama speak, Favreau sent a quick e-mail to Porter at 9:07 p.m. The subject line read: “Dude.” “We won,” Favreau wrote. “Oh my God.” The ending to his story No matter how it goes, Favreau believes this will be his last job in politics — “anything else would be so anticlimactic,” he said. Someday, he wants to write in his own voice, for himself. “Maybe I'll write a screenplay, or maybe a fiction book based loosely on what all of this was like,” Favreau said. “You had a bunch of kids working on this campaign together, and it was such a mix of the serious and momentous and just the silly ways that we are. For people in my generation, it was an unbelievable way to grow up.”