The Scene-Stealing Squirrel That Inspired an Ad Campaign 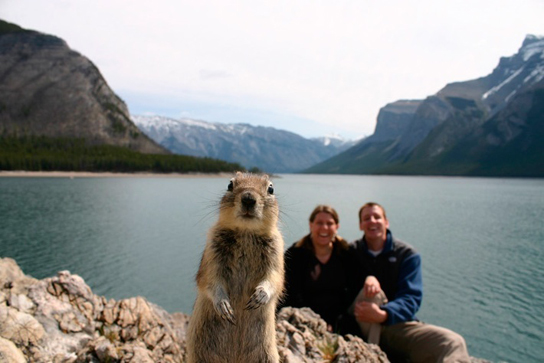 Remember this squirrel? He's the precocious little dude who photobombed a Minnesota couple's picture. This summer, Melissa and Jackson Brandts were on vacation at Banff National Park in Canada, snapping photos of themselves when a silly little dude decided he needed to be in the picture. The photo was entered into a National Geographic contest, it went viral and the couple and dude became famous! It's the epitome of squirrel stardom! This boy's my hero.

Well, now the internet's gone crazy photoshopping him into various scenes. Here's one of my personal favorites. 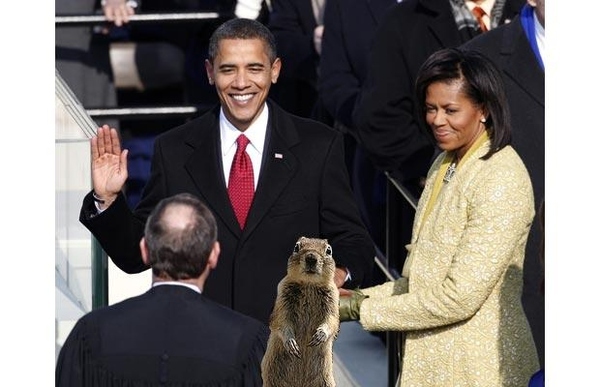 What the heck? The homeboy turned up at the inauguration! [Link]

And! American Airlines is piggybacking on the idea of a squirrel, running an ad campaign with a cute little guy starting September 26th.

My favorite part in all this (so far) is the press release from AA. There are some hilarious quotes in it.

“When the squirrel arrived on the set for filming he appeared to be very professional, although there were signs that he might be a bit of a publicity hound – well, rodent,” said Dan Garton, Executive Vice President Marketing – American Airlines. “Still, there was no indication that he was planning to use American Airlines as a springboard to launch a new phase in his career. With his sudden rise to stardom, American is now exploring the possibility that it was, in fact, the scene-stealing squirrel who appeared in our commercial.”

“We're not sure of the actual nationality of said squirrel – not sure whether he's French at all. We hired him through his agent in LA,” said Bill Oakley, Executive Creative Director with TM Advertising. “Since he popped up in Banff, maybe he's Canadian.”

Garton confirmed that American is in the process of making inquiries with the squirrel's agent, and may consider using the critter again to promote the airline.

“If our hunch proves to be true,” he said of the possible new spokes-squirrel, “We do have to consider that the little fellow chose American Airlines – and he's certainly versatile, which is an important quality in a, uh, character actor. Plus, his agent says he'll work for warm mixed nuts.”

I like how it's not over-the-top. They cite the photo as a reason to re-air the spot, which first ran in the spring. Personally, I can't wait to see more of this furry little character. (Even though it's really not him. That squirrel had his 15 minutes of fame and is now long gone. Good for you, buddy. I mean, we all know what happens when you overstay your welcome…ehem…)