J.R.R. Tolkien Exhibit Opening in New York Is the “Largest in Generations” 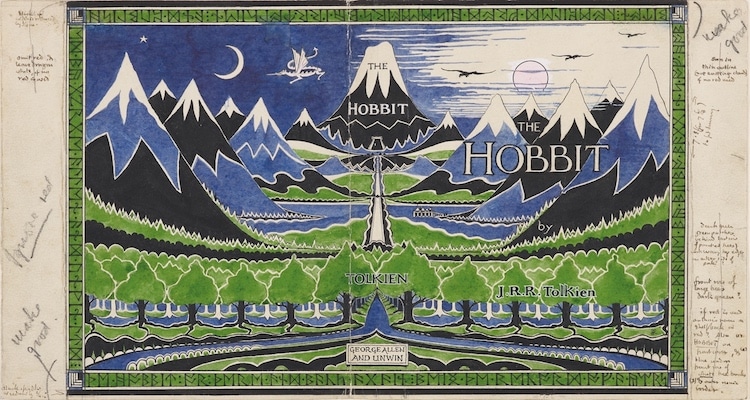 If the hobbits, elves, wizards, and dwarves that fill the pages of J.R.R. Tolkien's epic books capture your imagination, you'll want to book a ticket to New York. Reading The Hobbit and The Lord of the Rings remains a right of passage for many young adults, with aficionados of Tolkien immersing themselves in Middle-earth mythology. Millions have followed along with the adventures of Bilbo Baggins, his cousin Frodo, and Tolkien's rich cast of characters, but what if you could understand more about how they were developed?

Tolkien enthusiasts have an opportunity to learn more about these epic tales and the man behind them in an exhibition at the Morgan Library & Museum in New York City. An upcoming exhibit called Tolkien: Maker of Middle Earth will  from January 25 to May 12, 2019 and use a vast amount of original material to show how the beloved British author developed his iconic works of fiction. Hailed as “the most extensive public display of original Tolkien material for several generations,” the exhibition borrows from the Tolkien Archive at Oxford's Bodleian Library, Marquette University Libraries, the Morgan, and private lenders to paint a portrait of the author's stunning achievements.

Tolkien family photos and memorabilia are paired alongside his original illustrations, maps, and designs for The Hobbit, The Lord of the Rings, and The Similarillon. Through these materials, the public is able to peek inside the mind of a creative genius as he works through every detail of the fictional world he's about to create. Illustrations include Smaug the dragon from The Hobbit and Sauron's Dark Tower of Barad-dûr as described in The Lord of the Rings and The Similarillon. Drawn by Tolkien himself, it's an interesting visual to place alongside the written descriptions that have become so familiar. 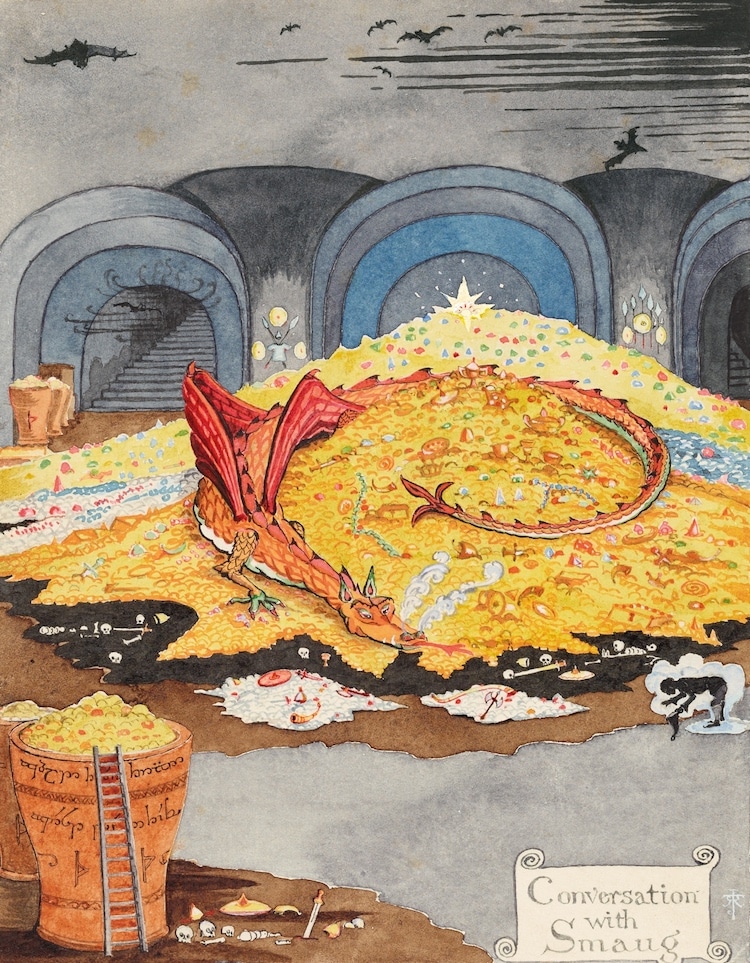 Together with annotated manuscripts and maps, the illustrations provide a full picture of an artist immersed in his creative process. The exhibition is a rare opportunity to follow Tolkien through his thought process, as he works out the minutiae of his characters and environments. “Tolkien has an immensely creative and active mind and this, of course, comes through in the creation of Middle-earth,” shares John McQuillen, Associate Curator of Printed Books and Bindings at the Morgan Library.

From his love of nature to his active imagination—as a young boy he created a language that would later develop into Elvish—it's clear that Tolkien's childhood was instrumental in shaping his work. Through family photos, childhood drawings, and early texts, the exhibition demonstrates how Tolkien was set on his path to becoming one of the most important fiction writers of the 20th century from an early age.

“Tolkien's Middle-earth speaks to so many of us because it's a complete world,” says McQuillen. “It has geography, it has history, it has languages. We are not reading isolated tales, but glimpses of a much richer and interwoven narrative. These rarely seen items in the exhibition reveal how, for Tolkien, the production of textual and visual material went hand in hand in the creation of Middle-earth.”

In addition to the exhibition, the Morgan Library has also produced a catalog with over 300 images from Tolkien's manuscripts, drawings, maps, and letters. Tolkien: Maker of Middle-earth is available for purchase via the Morgan Library's online bookstore and Amazon.

The work of J.R.R. Tolkien is celebrated in a comprehensive exhibition that includes the author's drawings for The Hobbit. 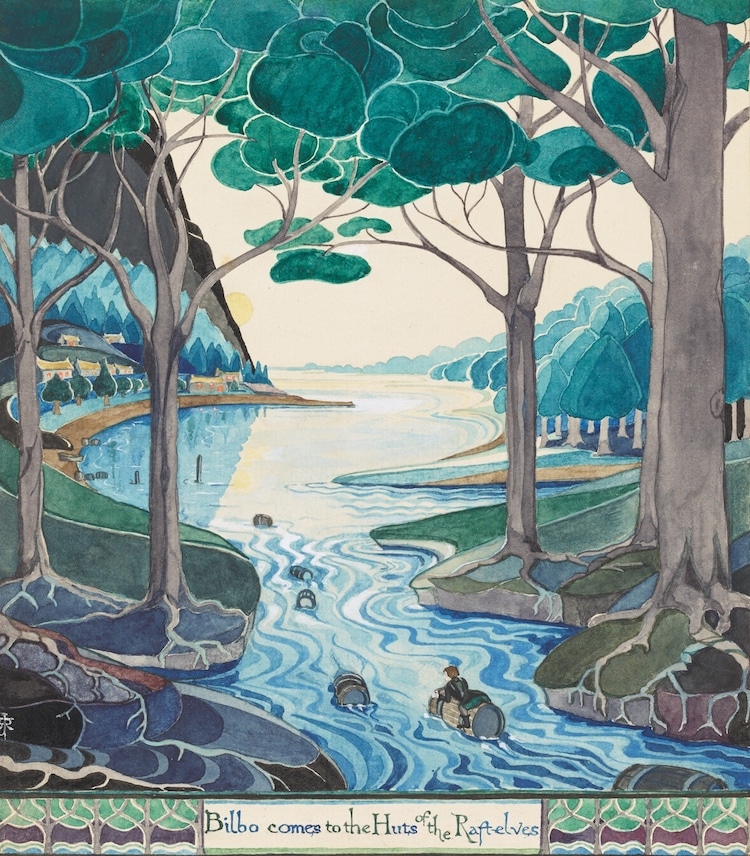 “Bilbo comes to the Huts of the Raft-elves,” July 1937, Watercolor and pencil.
Bodleian Libraries, MS. 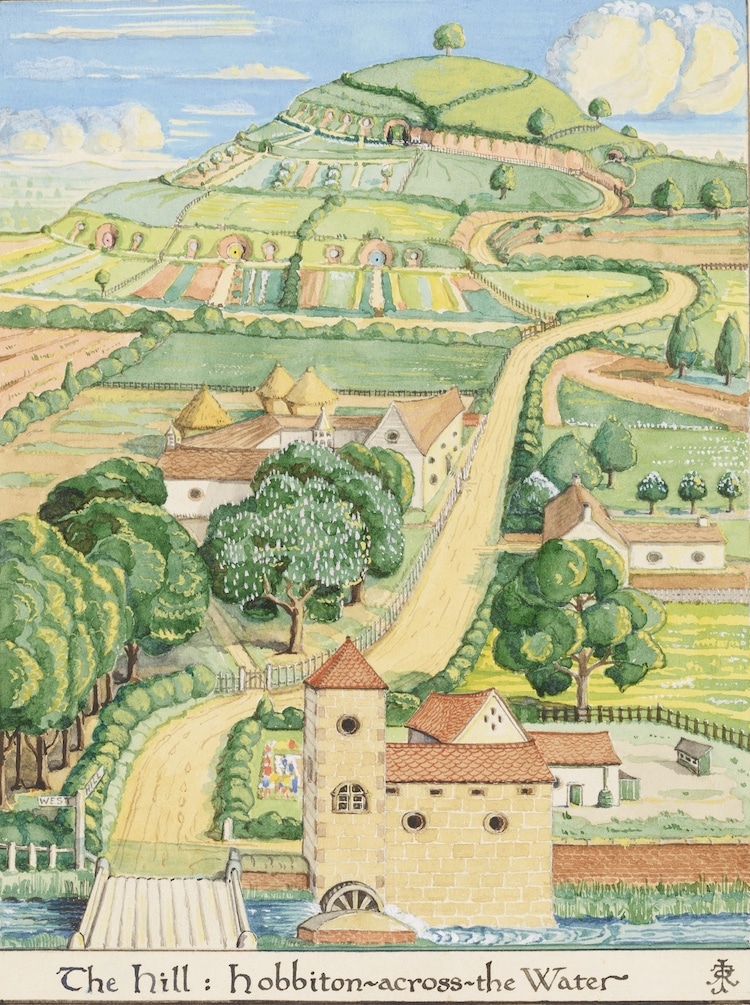 Learn more about the Morgan Library's Tolkien exhibition in this video trailer.

My Modern Met granted permission to use photos by the Morgan Library.