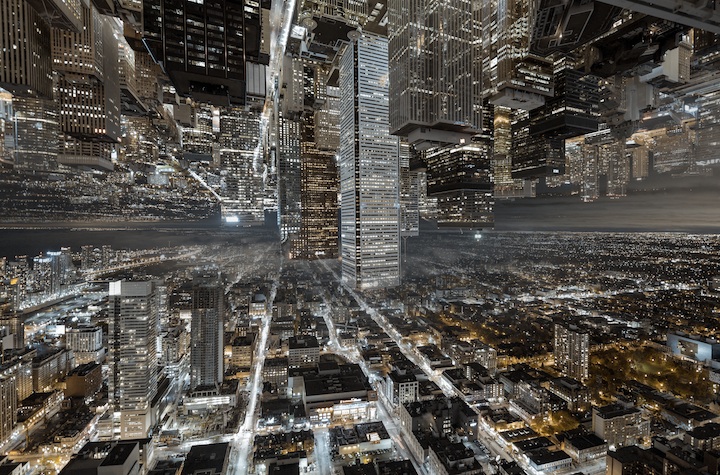 Toronto-based Tom Ryaboi busted out into the scene last year with his heart-stopping, adrenaline pumping rooftop photography. His most recognizable image, called I'll Make Ya Famous, flew through the web and Tom was quickly credited for being one of the pioneers of the rooftopping movement.

Today, it's with great pleasure that we bring you Tom's latest print, a mind-bending photo called Sidescape. Influenced by sci-fi films such as Star Wars and Blade Runner, he recently started experimenting by stacking two different photos of the same city on top of each other. The result is a stunningly surreal photo that looks like it's straight out of the movie Inception.

“This particular photo was taken this fall from a recently completed high rise in Toronto,” Tom tells us. “Nearly a 70 floor climb by foot was exhausting, but afforded some of the best views of the city I have ever seen. I remember thinking how different the west view (bottom image) looked from the east (top, inverted), like I was looking at two cities, divided by a border that I was standing on.

“The photos stacked almost perfectly together so as to look as one city divided by a sliver of sky, something you might see in the next Christopher Nolan movie.”

You can buy this print right now, exclusively at My Modern Shop.