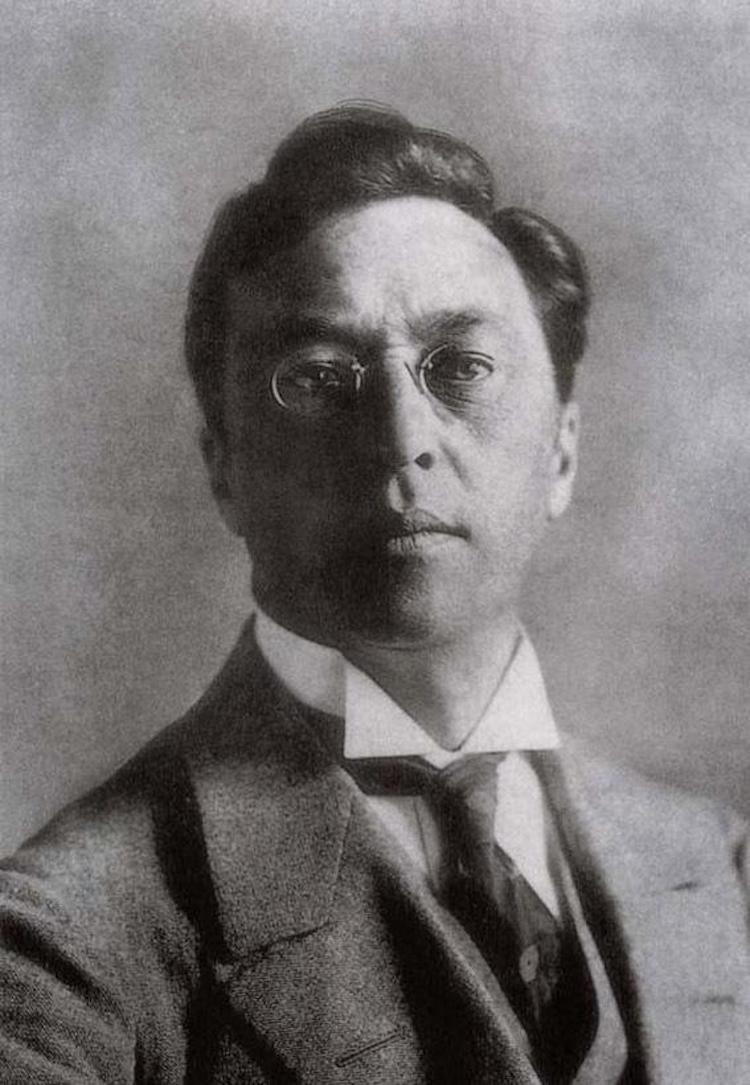 Russian art theorist and painter Wassily Kandinsky was one of the pioneers of abstract modern art. He believed that “objects damaged pictures,” so explored abstract forms and color as a way to evoke spirituality and human emotion. He created his own pictorial language that transcended the physical world and illustrated human experience.

Kandinsky viewed music as the most sublime form of abstract art and believed his paintings could communicate certain sounds. “Color is the key. The eye is the hammer. The soul is the piano with its many chords,” he was quoted saying. “The artist is the hand, that by touching this or that key, sets the soul vibrating automatically.”

Here are six Wassily Kandinsky paintings that showcase how his style developed. 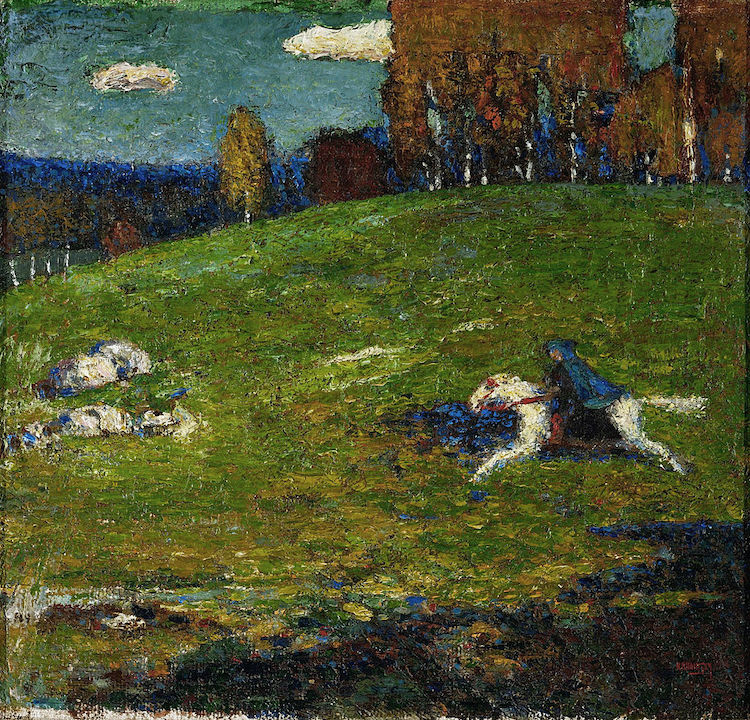 Unlike the abstracted compositions that Kandinsky became famous for, this early artwork represents a key moment in the artist’s developing style. One of his last paintings in this Impressionistic approach, Kandinsky painted the sun-dabbled landscape in short, colorful brushstrokes. The figure on horseback was the first version of many riders in Kandinsky’s paintings. It even inspired a four-year artistic movement in Germany called Der Blaue Reiter (The Blue Rider).

The Blue Rider group of artists—including Wassily Kandinsky, Franz Marc, and August Macke—shared a common desire to express spirituality through their art. They believed in the following: the connection between visual art and music; the symbolic associations of color; and a spontaneous, intuitive approach to painting. 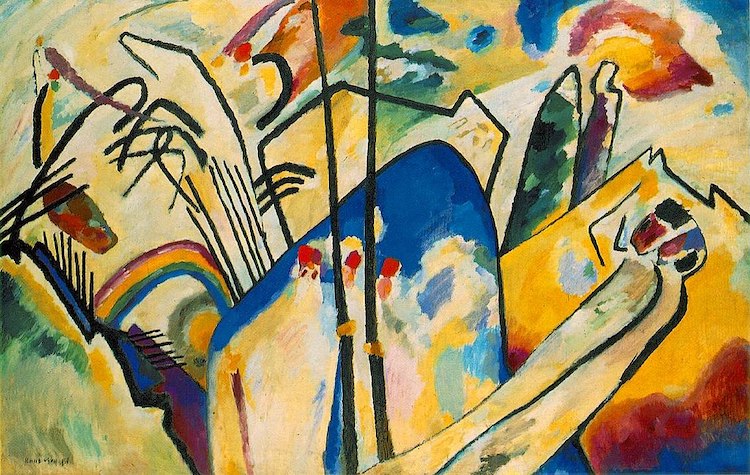 Composition IV is a semi-abstract representation of Cossacks in Moscow during the revolutionary period 1905-1906. The oil on canvas painting is part of a 10-piece collection, where Kandinsky depicts a battle that ultimately leads to peace. Among the vibrant swaths of color and bold black lines, Kandinsky painted several Cossacks carrying lances as well as boats and a castle on a blue hilltop. The flowing, reclining figures to the right of the composition represent harmony and the end of the battle. These figures and symbols were repeated in Kandinsky’s later works and became even more abstracted. 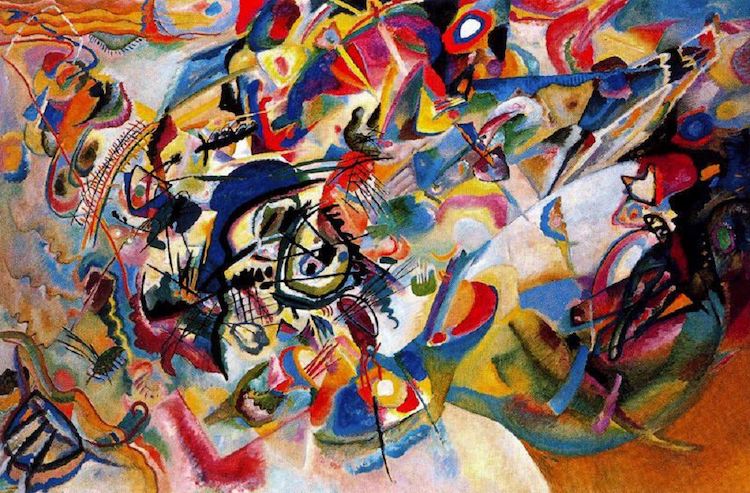 Kandinsky created Composition VII in 1913 while he was living in Munich, Germany. It might appear like a random jumble of shapes and symbols, but it was actually planned-out months in advance. Prior to creating it, Kandinsky created over 30 sketches, using oil paints and watercolors, to decide on the composition.

Kandinsky believed his art could evoke the sound of music and used the terms “improvisations” and “compositions” to describe his paintings. Composition VII—with its swirling vortex of color and symbols—was often described as “operatic.” Still focused on the theme of battle and redemption, Kandinsky maintained several symbolic references in this painting, including glyphs of boats with oars, mountains, and figures. 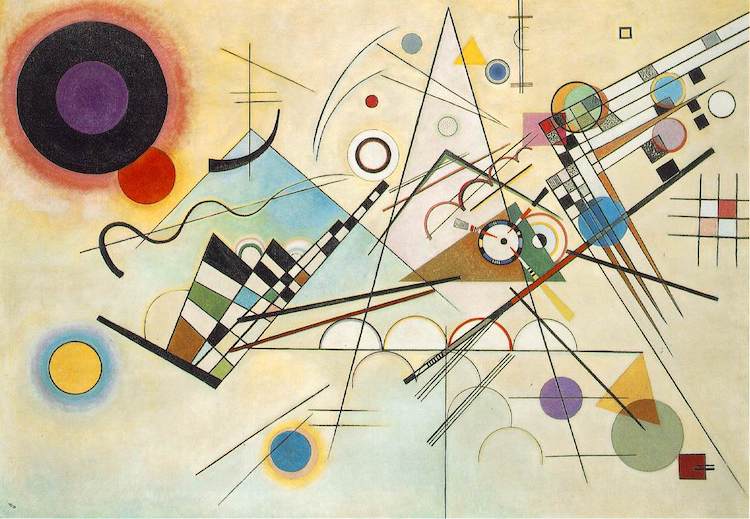 Painted while Kandinsky taught at the Bauhaus, the geometric order of Composition VIII illustrates the style ethos of the school as well as the artist's interest in Suprematism and Constructivism. Kandinsky’s use of circles, grids, semicircles, triangles, and other mathematical forms reflect his belief that shape and color alone could communicate emotion and sounds.

There were six solar eclipses between 1921 and 1923, with two occurring in the year Kandinsky created Composition VIII. These events may have been the inspiration for the multi-colored circles in the painting. According to Kandinsky, black signified silence while orange indicated the alto range. Yellow, forming a halo around the blue and red circles, represents explosions of sounds, such as loud trumpets and fanfares. 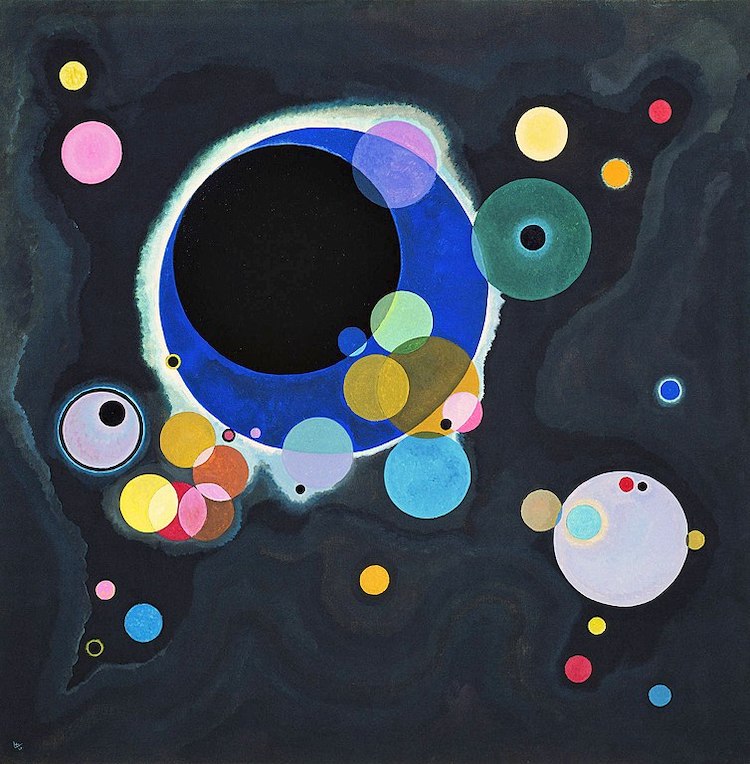 Kandinsky interrupted the circle many times in his work. He claimed that the shape “is the synthesis of the greatest oppositions. It combines the concentric and the eccentric in a single form and in equilibrium.” He continues, “Of the three primary forms, it points most clearly to the fourth dimension.”

For Several Circles, Kandinsky limited the painting to include only one form—the circle. This allowed him to focus on color, scale, and composition. Varying in size and hue, the circles seem to move around the canvas and interact with each other. Some even overlap one another and change color where they meet. Kandinsky championed the view that colors could have different spiritual values. The hues in this painting promote emotional harmony, while the dynamic movement of the round forms evokes life itself—from the stars in the cosmos to water droplets on a leaf. 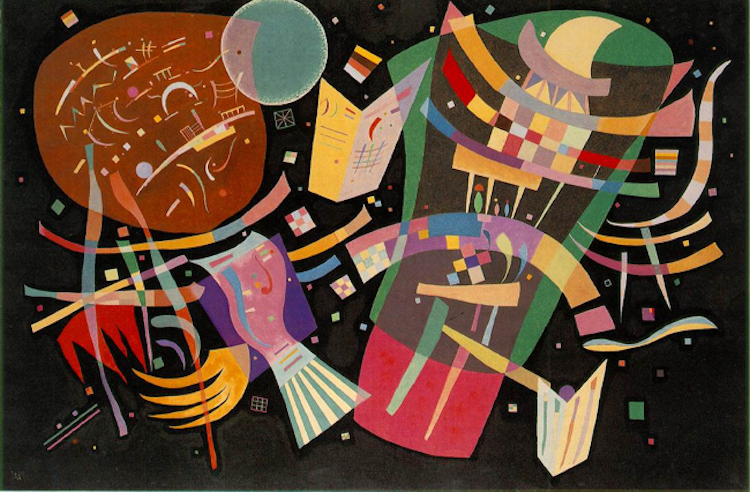 The last in his series of Compositions, this work is the pinnacle of Kandinsky's exploration of expression through nonrepresentational form. The organic shapes were influenced by the biomorphic figures of Surrealism while the colors express the inner emotions Kandinsky experienced near the end of his life.

The black of the background represents the cosmos and the end of life while allowing the colored sections to stand out. The painting illustrates the circle of life and the emotional ups and downs that everyone in the world experiences.

Like Wassily Kandinsky's work? Share
Like My Modern Met on Facebook
Get Our Weekly Newsletter
Become a
My Modern Met Member
As a member, you'll join us in our effort to support the arts.
Become a Member
Explore member benefits