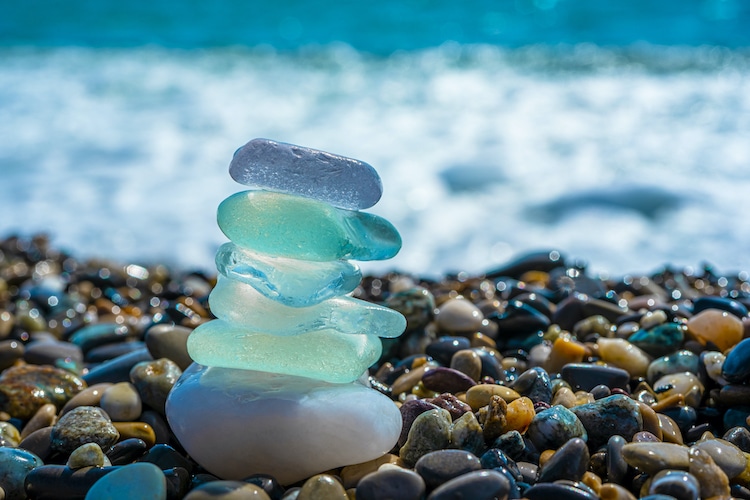 Beachcombing is a fun activity to do while you’re walking along the shore. You can find some real treasures that way, one of which is sea glass. This special type of frosted, polished glass is an unintended collaboration between humans and the ocean. When a piece of glass is in the ocean water, the waves, salt, and sand tumble it to where it’s worn down into a small colorful bauble that is as smooth as a stone.

Finding sea glass can be tricky, though. Not all beaches have sea glass; and, if they do, there are sometimes regulations that might prevent you from taking a piece home with you. We’ll break down the qualities of sea glass and some of the best places around the world to find it.

Scroll down for a crash course all about sea glass.

What is Sea Glass? 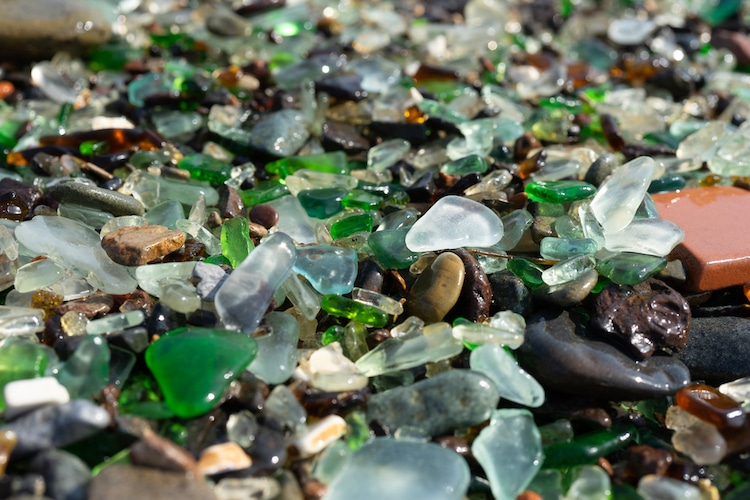 If you’ve ever been walking along the beach and spotted a colorful, unusual-looking stone, it might’ve been sea glass. Sea glass is frosted pieces of smooth glass found on the ocean shore. It’s formed when glass makes its way into the water—think discarded bottles or items lost during natural disasters and even shipwrecks—and is essentially pulverized by the waves, salt, and sand. This is not a quick process; it can take many years for a piece of glass to become sea glass.

The highest quality sea glass is completely smooth and frosted over. The frosting indicates that the soda and lime content (two common additives in glass production) has dissolved due to the saltwater, and there are tiny holes all over the surface.

You’ll notice that sea glass comes in all sorts of colors. But when you consider that all sea glass comes from discarded bottles, it’s no surprise that brown, green, and white are the most common colors.

You might’ve heard the term beach glass and wondered if it’s the same thing as sea glass. The short answer is no, the two are not the same. Sea glass is found on saltwater beaches, whereas beach glass is on freshwater or seawater beaches. Sometimes, it can be found on a lake, such as the Great Lakes of the United States.

The main difference between sea glass and beach glass is the appearance. Because the water isn’t as rough (especially on a lake), beach glass won’t get as much tumbling and tossing. This may lead to glass with a less frosted appearance and some shiny spots still on it. 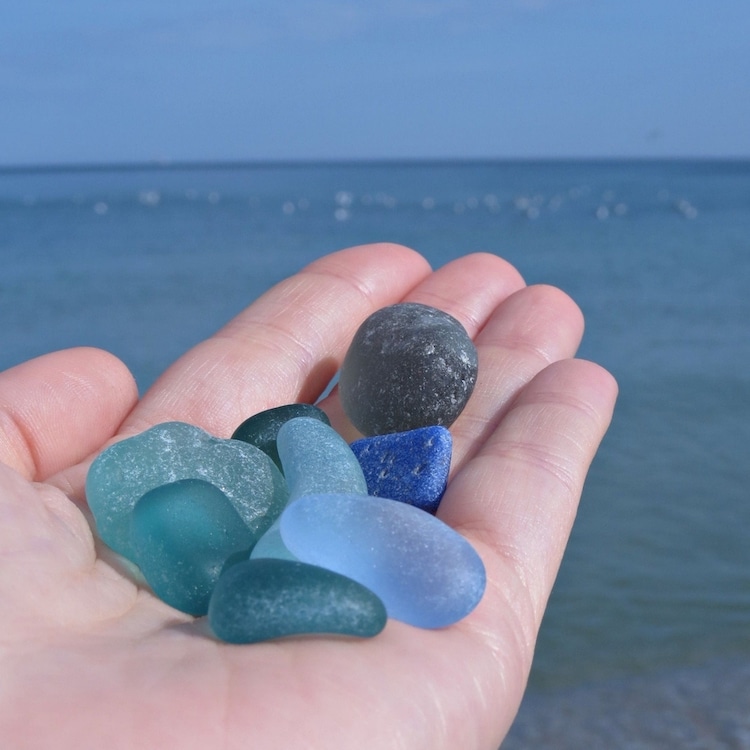 Sea glass is something you can look for while beachcombing. Not every beach, of course, has sea glass. But to increase your chances of finding the colorful baubles, head to the beach around low tide.

Sea glass, in general, is also getting harder to find. The reason is that there is less glass going into the ocean because of our use of plastic. It’s no secret that we have a plastic problem, which is often taking the place of glass in our waters. There have been concerted efforts, however, to minimize the amount of discard going into the ocean, which also results in less sea glass.

If you do spot sea glass, should you pick it up? The answer depends on where you’re located. On all beaches located in U.S. state parks, it's illegal to collect sea glass; you’ll be fined if you’re caught.

In other places, it’s not expressly forbidden but is highly discouraged. Before you start searching for this colorful glass, make sure you check in with the local regulations. You don’t, after all, want to upset the natural beauty of the beach you’re walking on.

This is arguably the best place for sea glass in the world as the sand is practically replaced with sea glass. Although you can’t collect it (remember, it’s a state park), you can admire it and visit the International Sea Glass Museum that’s close by.

Davenport Beach is known as being difficult to access with sheer cliffs and a rough sea—some people wear wet suits when they go searching for sea glass!

Search for beach baubles during a relaxing walk on the shore of Summerland Beach.

Because of a geological marvel near this beach—called the Swiss Cheese Shoreline—the waves throw the glass against lava rocks. The excellent tumbling makes it ripe for sea glass.

Sand Beach, located in Acadia National Park, is one place where you'll have to have a watchful eye out for sea glass and make sure you wait for low tide.

A post shared by Seaglass from Seaham UK (@myseaglassmypassion)

There used to be a glass factory near Seaham Beach, so a lot of glass made its way to the ocean. The result was a plethora of sea glass. Although it has become a very popular spot for collectors, a lot of the glass has been removed.

Head to the rock pools on Bovisand Beach and you just might find some sea glass.

The secluded Sea Glass Beach in Okinawa reportedly has a lot of red and brown sea glass. You’ll want to bring your shoes as there is lava rock in addition to the beach baubles.

Known for its Victorian bathing boxes, there’s also sea glass to search for on this popular beach in Melbourne.

Steklyashka Beach is similar to Glass Beach in Fort Bragg, California, where the sand is practically replaced with sea glass. During the Soviet era, the beach was used as a place to dump bottles from the porcelain factory, which means it has a lot of sea glass today.