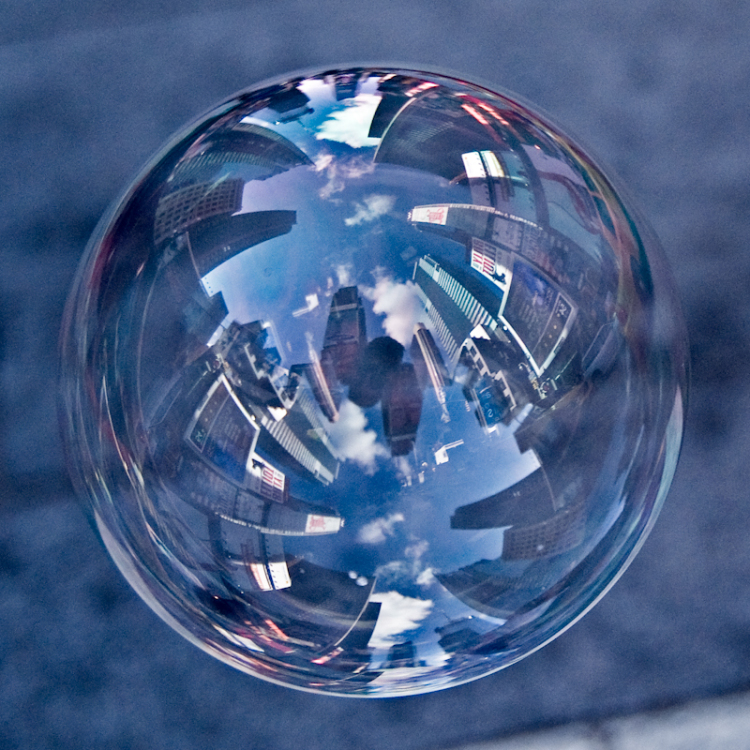 “In the beginning of most any artistic pursuit, specific themes and subject matter begin to pull at you in very personal ways. They begin to define what you, as a photographer, will shoot.” – Tom Storm, Bubble Photographer

In the summer of 2006, Tom Storm was traveling through Galway, Ireland, when he came upon the Galway Arts Festival. Huge bubbles suddenly surrounded him and he found them so beautiful and intriguing that he started snapping away. A few months later, as Tom was rediscovering these photos, something caught his eye. In the bubbles' reflections, he found incredibly crisp detail. “I found there was a whole world within the bubble, a perfect world in focus,” Tom said.

At the time, Tom was living in Gdanks, Poland so he grabbed his camera and headed to Neptune's Fountain. He soon discovered a two-person system for getting the shot. “Looking for any excuse to travel the world (my wanderlust defines me), I soon challenged myself to capture the reflections of a major landmark in every country in the world,” says Tom. “These initial pictures have evolved into the World in a Bubble Project and have helped me engage people all around the world in a mission to see things from a different perspective.”

I got in touch with Tom to ask him a few questions. Read that interview below. 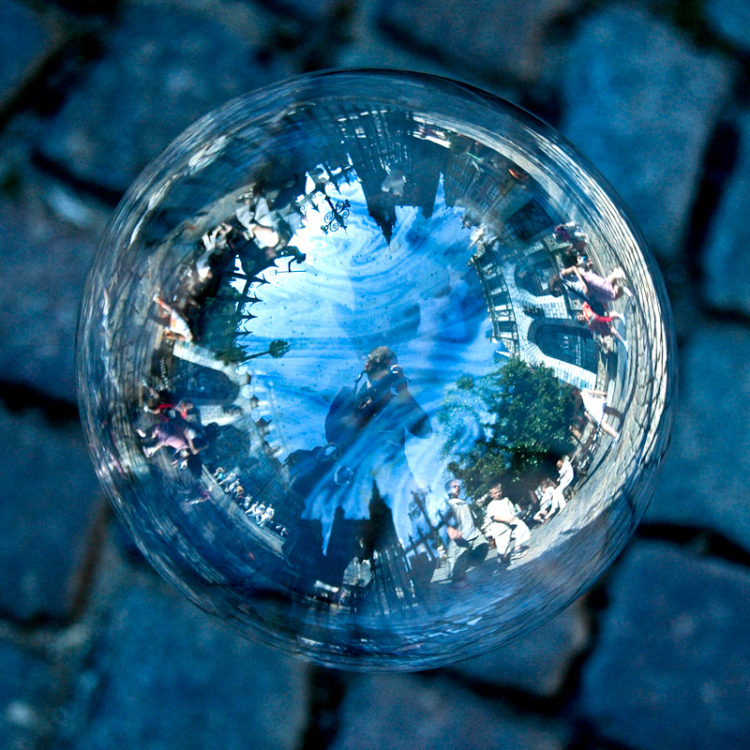 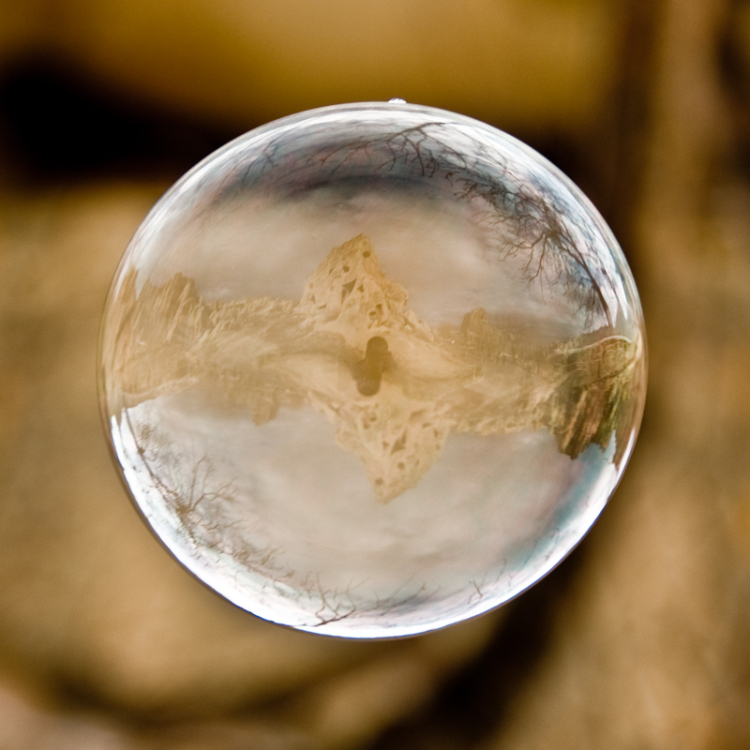 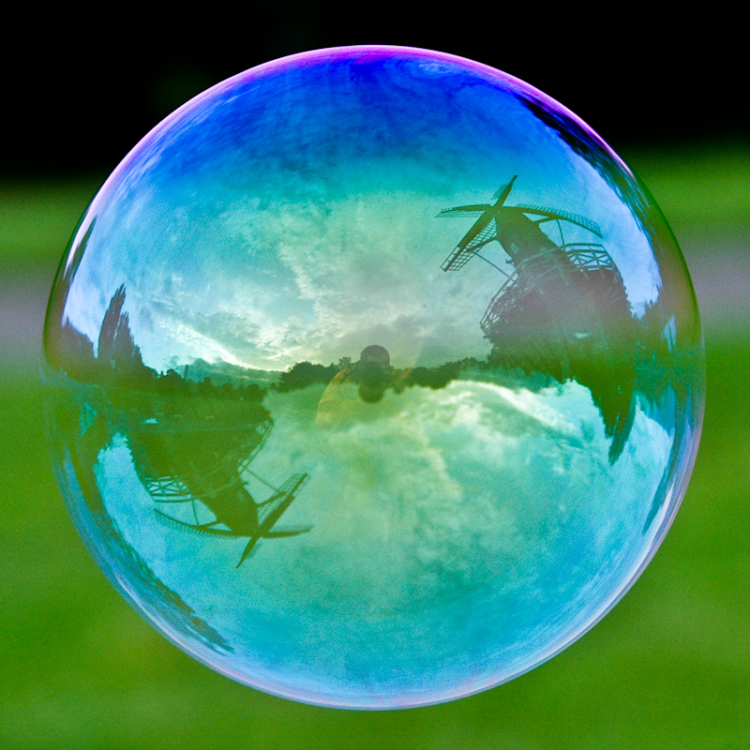 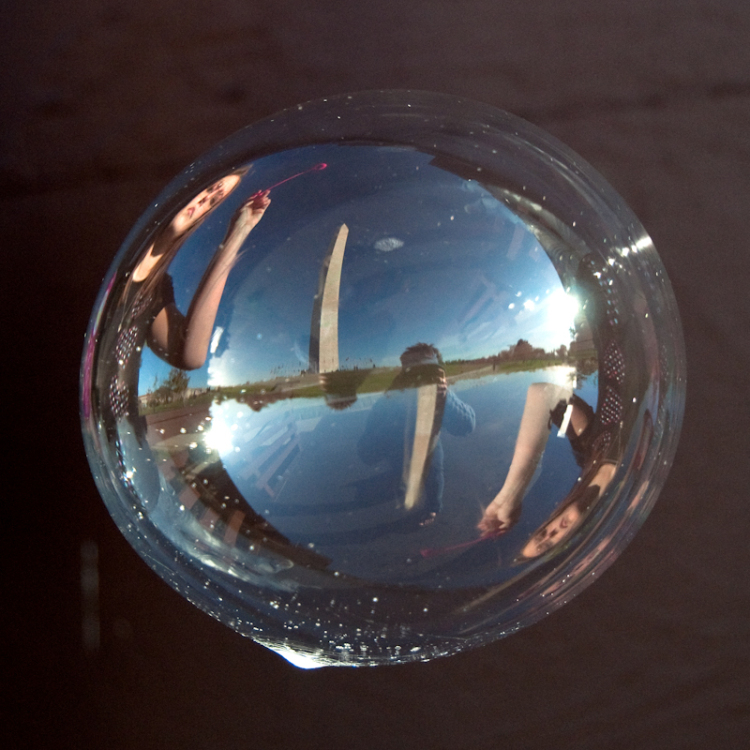 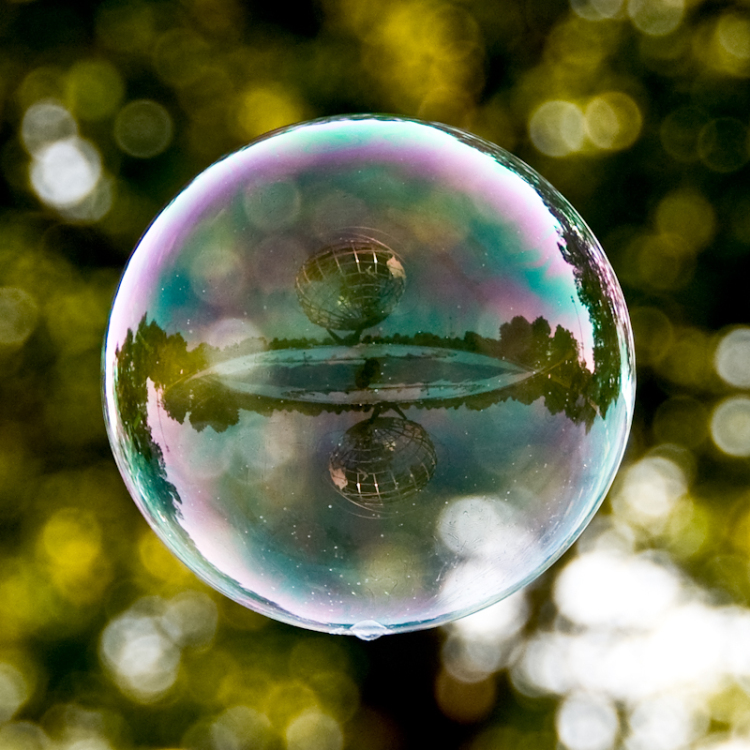 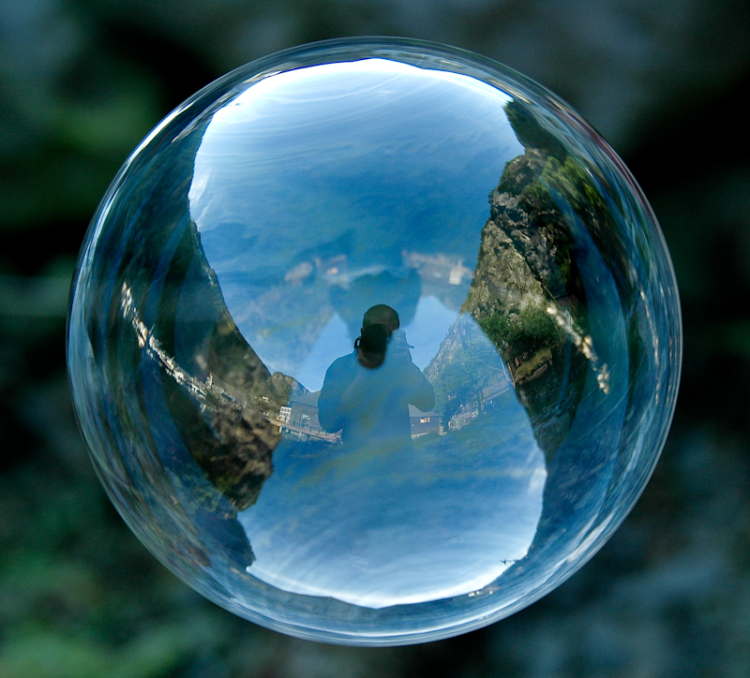 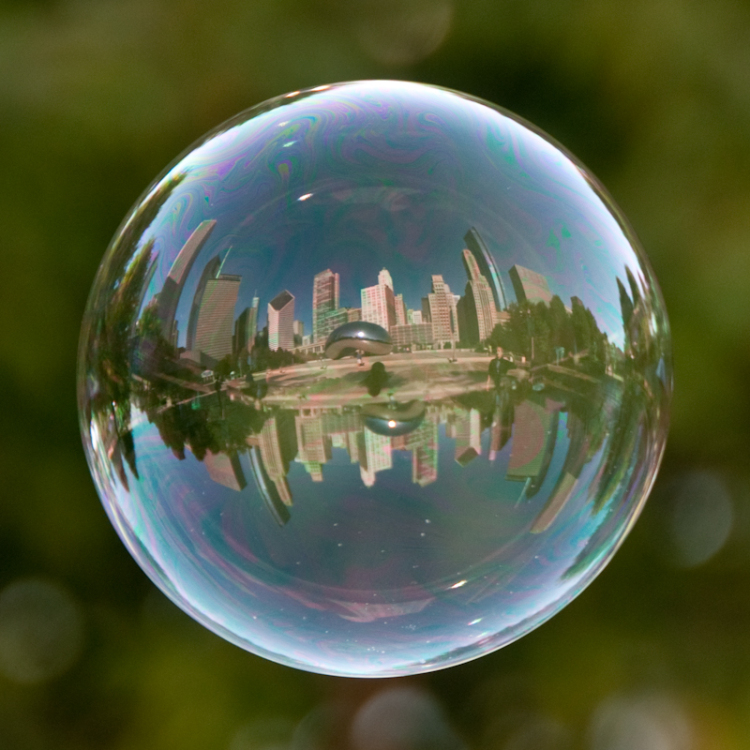 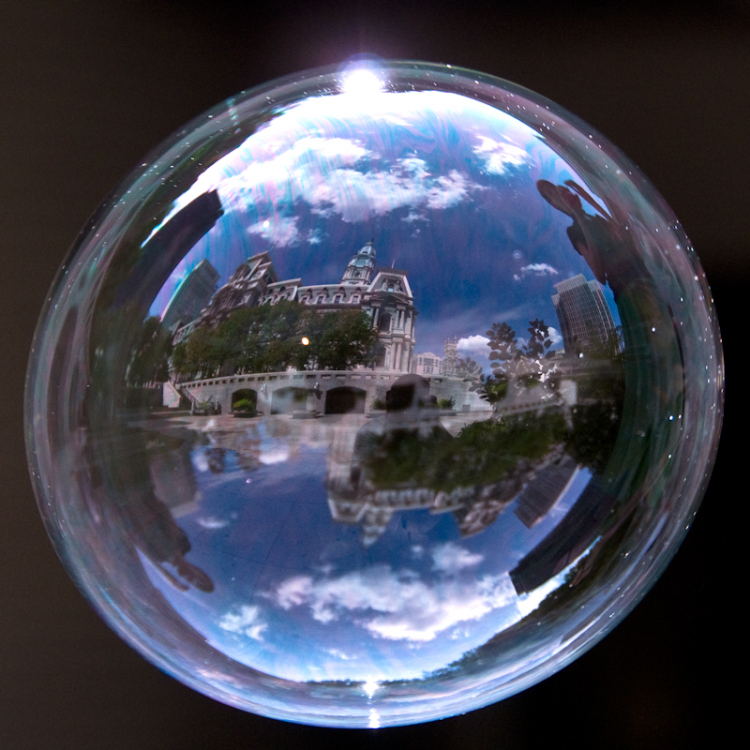 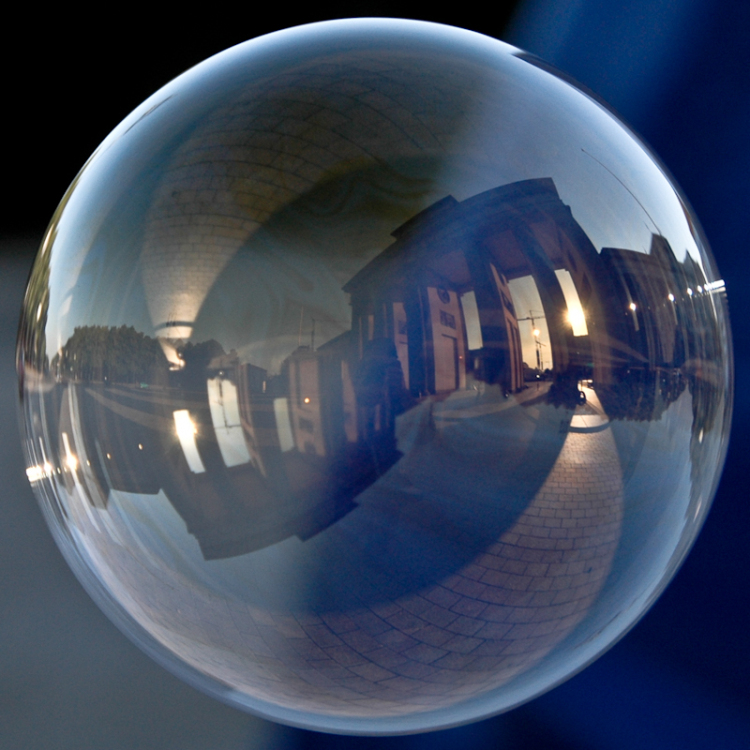 In post process, do you use any Photoshop?
I manage and edit most of my photos in Lightroom, adjusting exposure and sharpness. I then use the levels adjustment in Photoshop for any finishing touches. What Photoshop I use is very limited. My rules are: simple levels adjustments, some sharpening if needed, and cropping. I don't mask areas or use layers. It's important to me that the image you see is what I see floating in front of me as the shutter clicks.

What do you hope to capture with this series?
I hope to capture people's imaginations and attention. I'd like to broaden their capacity to see their world from a different angle. From a photographic standpoint, I'd like to capture the Leaning Tower of Pisa and the Statue of Liberty. They have so far eluded me on account of the weather. Bubble's are finicky. Temperature, humidity, barometric pressure, wind, and lighting all play very big roles on whether I can even get a shot on any given day. I've traveled to Italy only to end up taking pictures of Italians riding bicycles in the rain (while holding umbrellas. They should hand out awards for that kind of thing).

I would love to capture the Sphinx in a bubble. Eiffel Tower, Big Ben, Stonehenge, the Hollywood sign, the White House… Obviously I still have a lot of work to do. My hope is to eventually be sponsored similarly to the “Where the Hell is Matt?” campaign. The World in a Bubble Project has become so much more than I originally anticipated. We've connected people, shared experiences, and brought something new to the table in a time when media focuses on so much of the hard-to-swallow news of the day. It's a community-oriented photographic journey that crisscrosses cultures of the world. Cultural outreach and awareness are very important to me. I'd definitely like to advance the project and use it as a vehicle to touch lives in a positive way.

What's been the most gratifying part about this project?
The most gratifying part of this project has been the interactions with all the amazing people I have met in my journeys to capture these images. Believe it or not, blowing bubbles causes somewhat of a scene whether it be Times Square in New York City or the Blue Mosque in Istanbul. Depending on the location I will either bring a helper with me or find curious people on location to help make the bubbles for the shot. It's rare to have a shortage of people approaching me saying, “What are you doing?!?” I've posted video of this process on my website. During my most recent bubble road trip here in the States, I used my iPhone to record, edit, and upload each bubble attempt so fans at home could follow along. I'm always looking for people to meet me on location to be a part of the project. All upcoming events and destinations post on my website. You should come out, too! (Thanks for the invite!)

What's next?
Many people have asked, “What's next?”. That seems to be the big question lately. I'm never at a shortage of projects and plans. Photographically, I'd like to begin to work in crisis areas around the world. Capturing the visceral nature human interaction and using the images to generate awareness for non-profits and other organizations who help make the world we share a better place. I feel the bubble project will always be an ongoing event. I'm already recognized as “the bubble guy” in photography circles. To some extent, this situation may already be out of my control. 🙂 I could end up with a Mr. T-like situation, but I always liked Mr. T. And besides, have you ever tried to control a bubble?

Thanks for the tip, Carmen!