By Madeleine Muzdakis on December 7, 2020 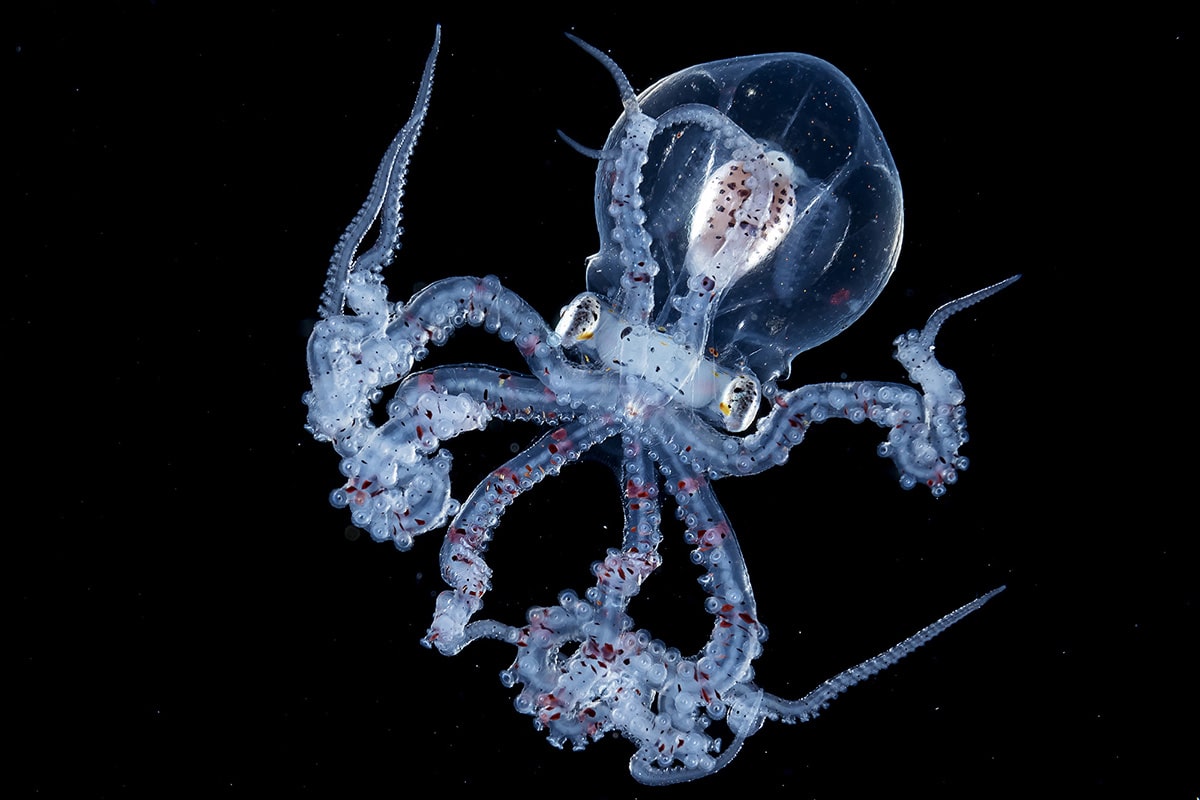 The depths of the ocean are a powerful draw for researchers, experienced divers, and photographers alike. The vast bodies of water which cover over 70 percent of the planet’s surface are still being explored and documented. Lured by mystery, blackwater photographers dive at night into icy, pitch-dark depths. Taipei-based photographer Wu Yung-sen has been deep sea diving and photographing marine life for four years. On a recent blackwater dive—unable to see the bottom and surrounded by impenetrable space—he chanced upon a rare larval Wunderpus octopus. A stunning image captures the encounter; it shows the delicate and transparent baby octopus encasing its own brilliantly red brain, a sight few ever witness in the wild.

The Wunderpus octopus—called Wunderpus photogenicus, literally meaning photogenic wonder—was only first officially described by researchers in 2006. The animal is still understudied compared to other octopi. The species lives in the coastal waters of the Pacific Ocean south of the Philippines. The adults are a rusty red with white spots and stripes. They possess an ability to contort themselves to mimic other similarly shaded sea creatures, such as the venomous spiny lion fish. This protective mechanism, however, does not benefit the young translucent larvae.

The specimen encountered by Yung-sen while blackwater diving in Anilo in the Philippines was in this lifecycle phase and presented a visible brain within its translucent head. The avid diving photographer—who also works as a business consultant—knew he was seeing a rare phenomenon. Luckily, he snapped the image before the young octopus could drift away.

Yung-sen was able to capture this elusive creature—and many others—by using the special techniques employed by blackwater divers. These enthusiasts hope to encounter the unusual, solitary life forms in the open ocean. Blackwater divers take a boat out to sea until the depth exceeds two kilometers. Lights on long lines are lowered first, then the divers descend. They remain tethered to the boat for safety and stability, as they sit and wait about 50 meters below the surface. The lights first attract microscopic zooplankton. The plankton in turn draw small planktonic creatures which feed on the minuscule organisms. Jellyfish, squid, and larval (baby) fish drift in to feed under the suspended light. In blackwater photography images such as those of Yung-sen, the tiny marine life appears isolated against an endless expanse of darkness. Up and down are indistinguishable as the strange species hang suspended under the single lightsource.

For Yung-sen, blackwater photography is a way to explore the limits of the natural world, unseen by many. However, he is also an award-winning photographer in much shallower waters. The ambitious photographer won the Taiwan National Award in the Sony World Photography Awards for his image of migrating salmon in British Columbia, Canada. To get the shot, Yung-sen lay in the freezing river for hours.

Whether he is lying in a river or deep sea diving, Yung-sen's wildlife photography brings aquatic wildlife to a global audience. My Modern Met recently had a chance to catch up with Yung-sen to discuss blackwater photography and his memorable octopus photo. Read on for our exclusive interview with the intrepid wildlife photographer. 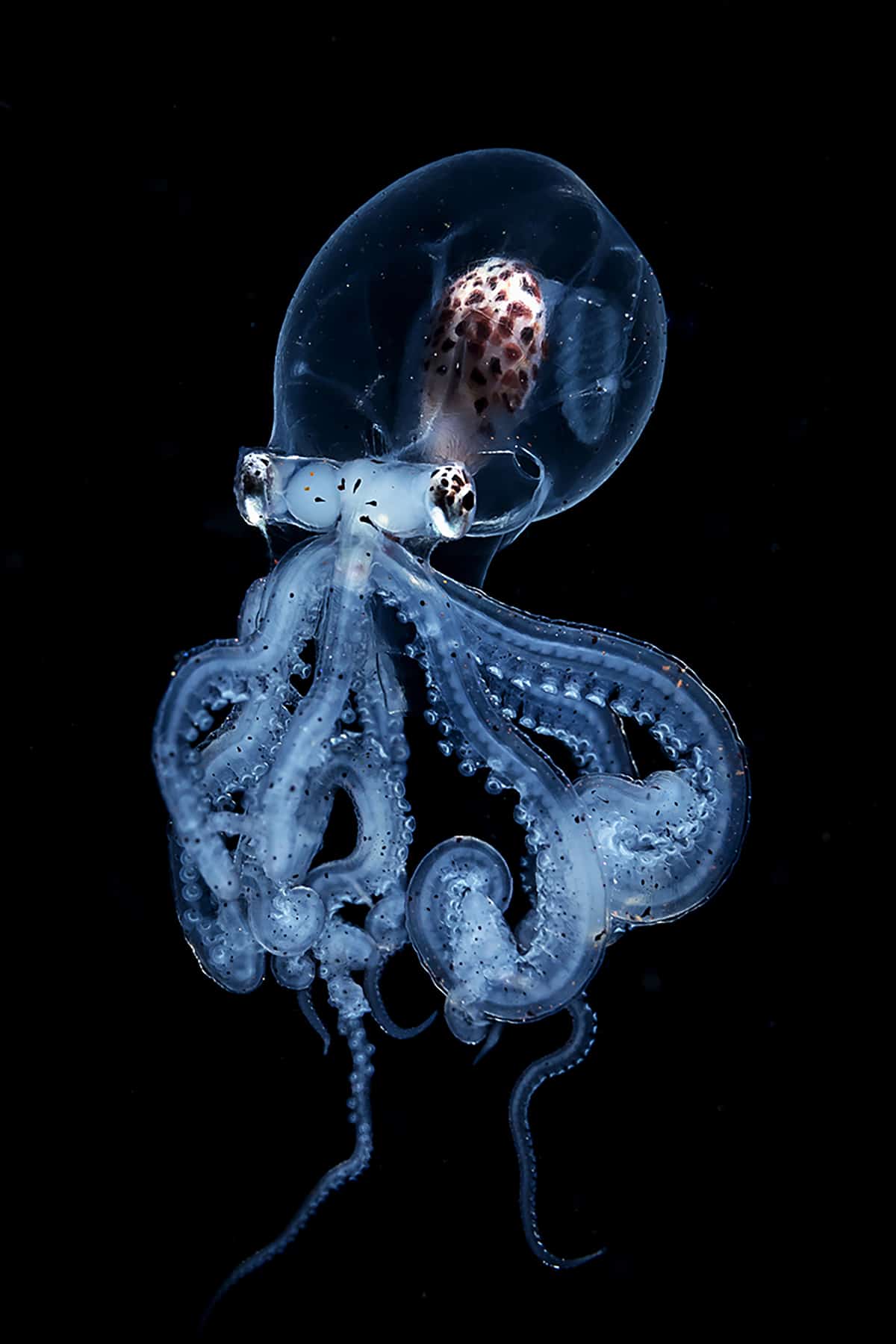 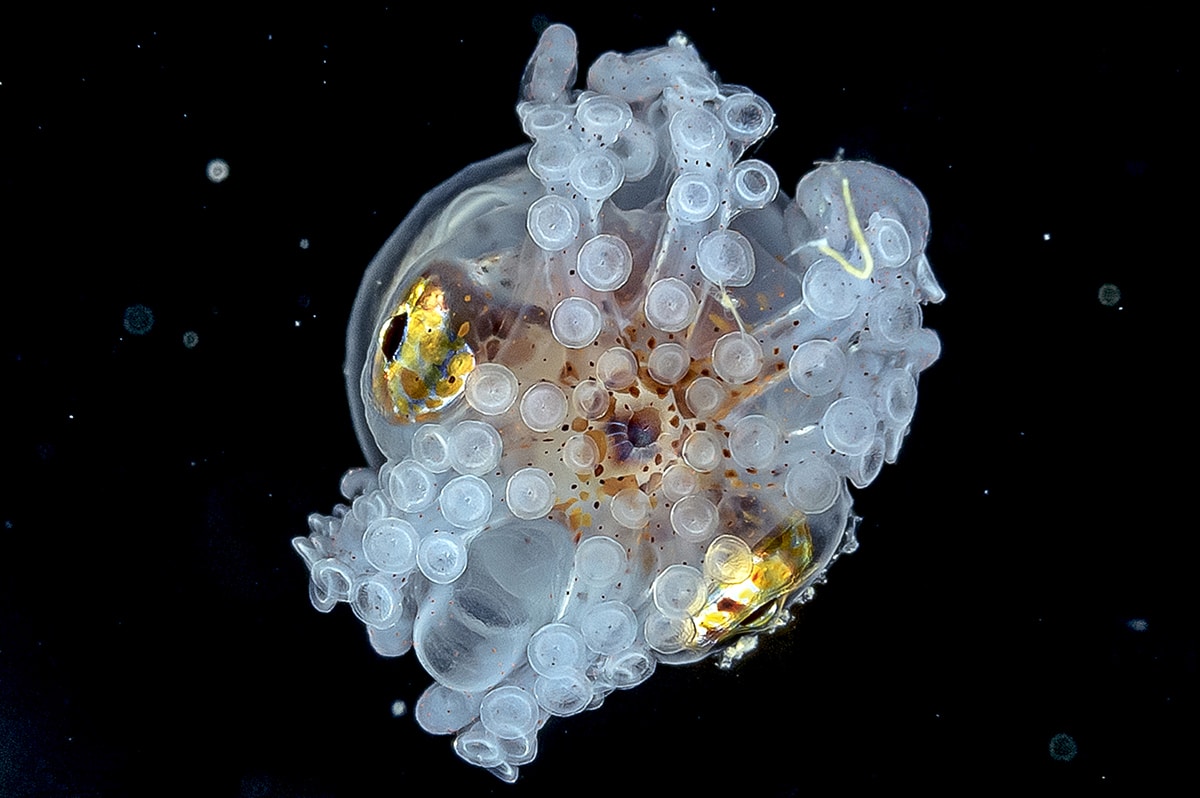 Blackwater is the ultimate frontier for me. The purpose of blackwater photography is to explore an unknown world, and to look for new life and new species in the vast sea, showing the side of creatures that people barely know. 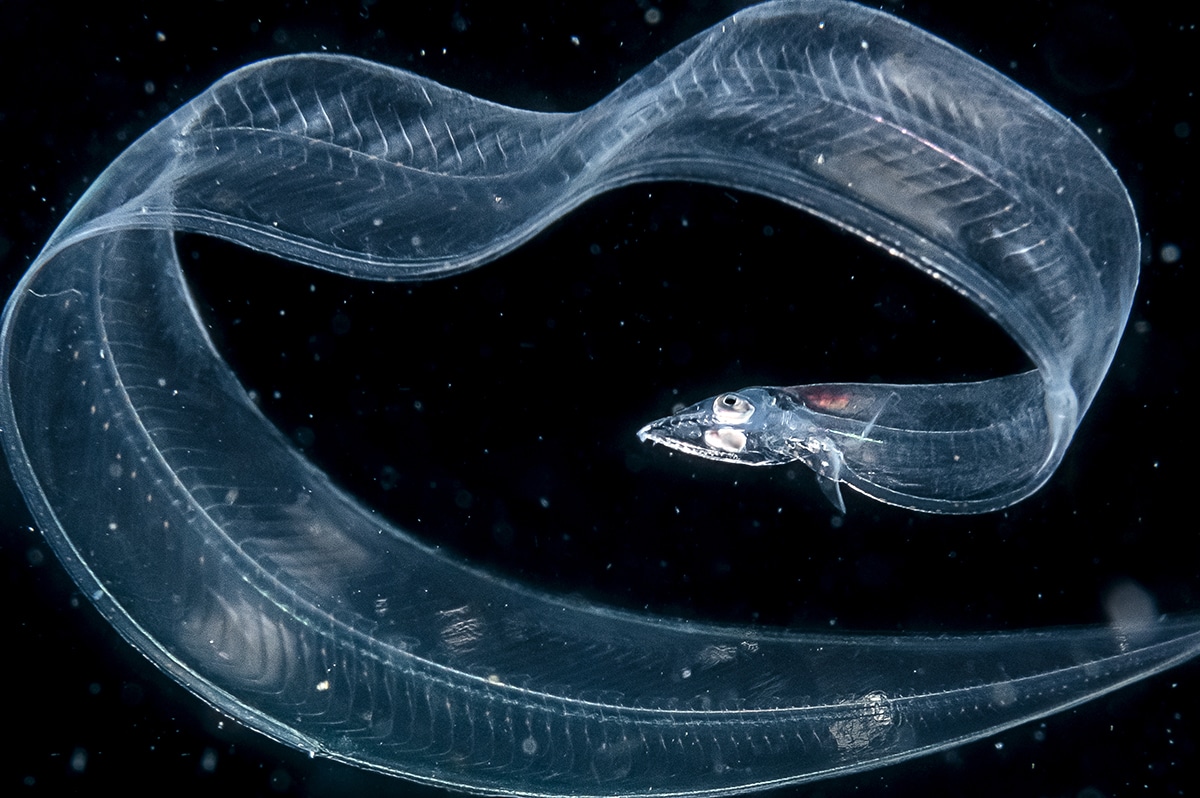 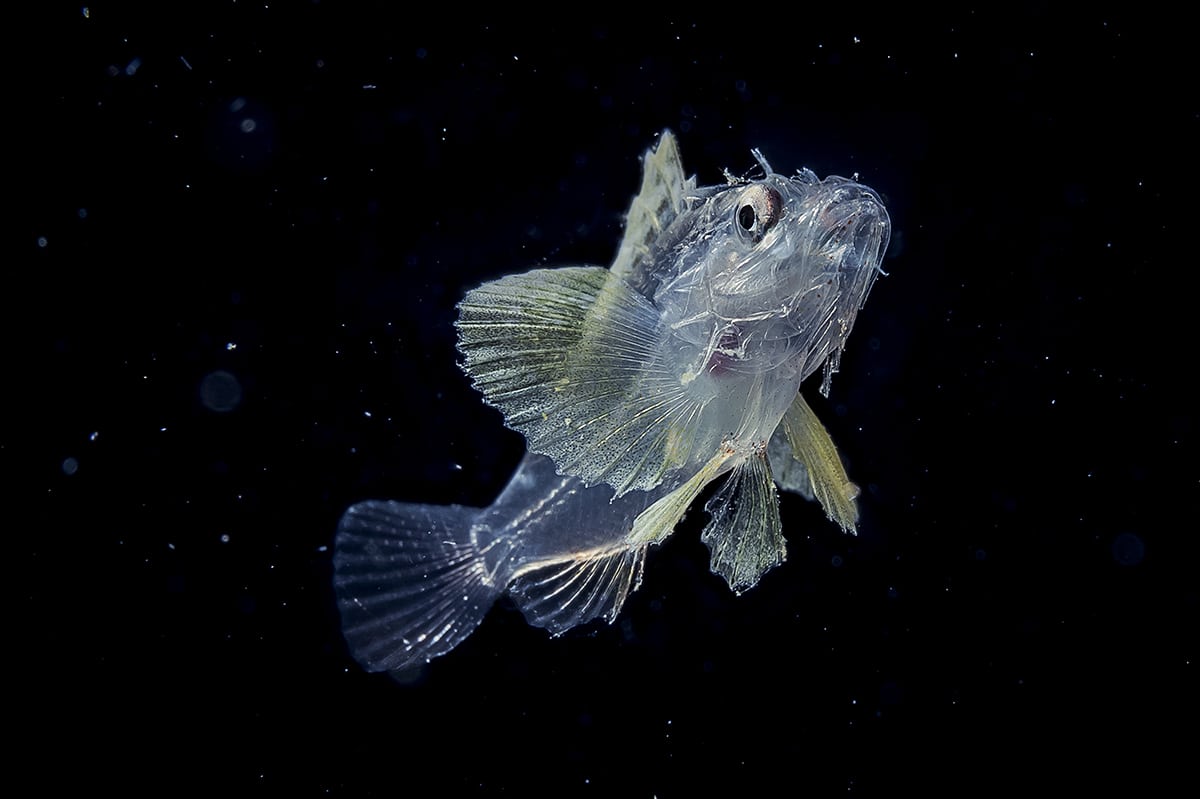 What is the biggest challenge of this type of photography?

The most difficult thing is finding creatures. First, it’s a matter of luck to encounter creatures. Afterwards, taking photos in a gravity-free environment seems like I am chasing alien creatures up and down. That’s exactly how I feel! 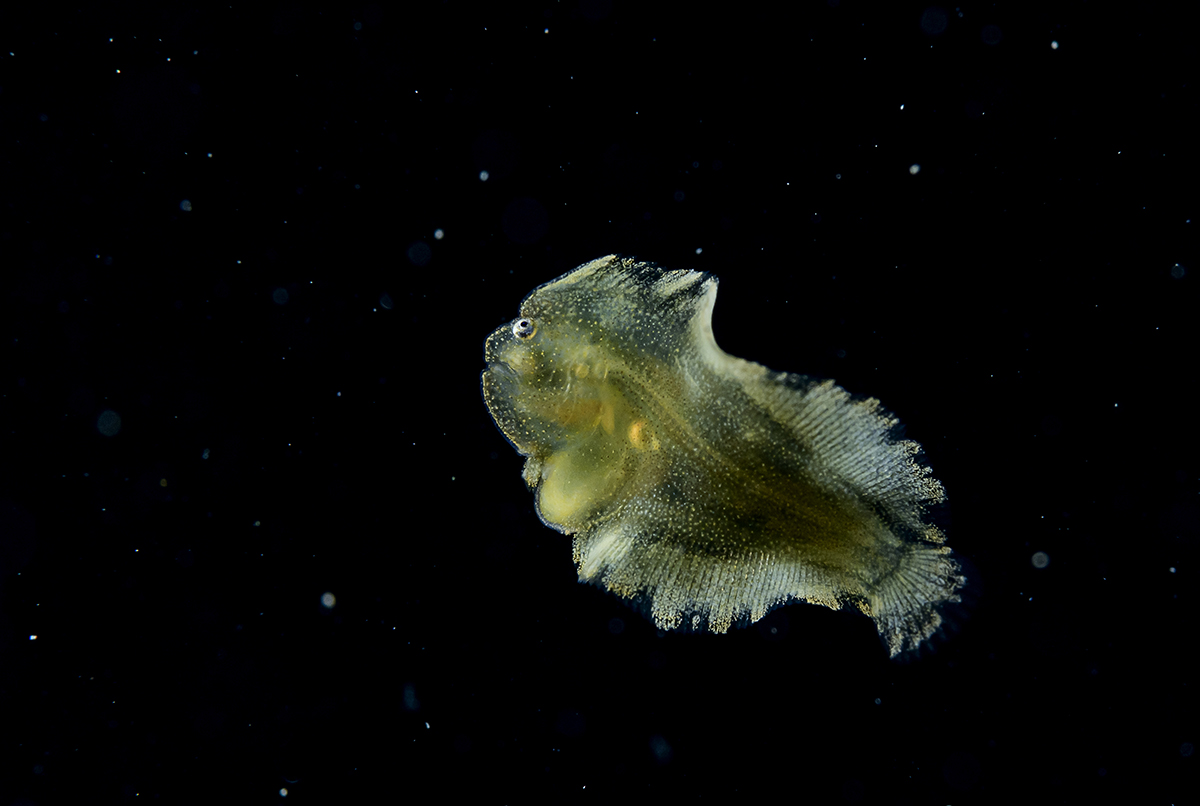 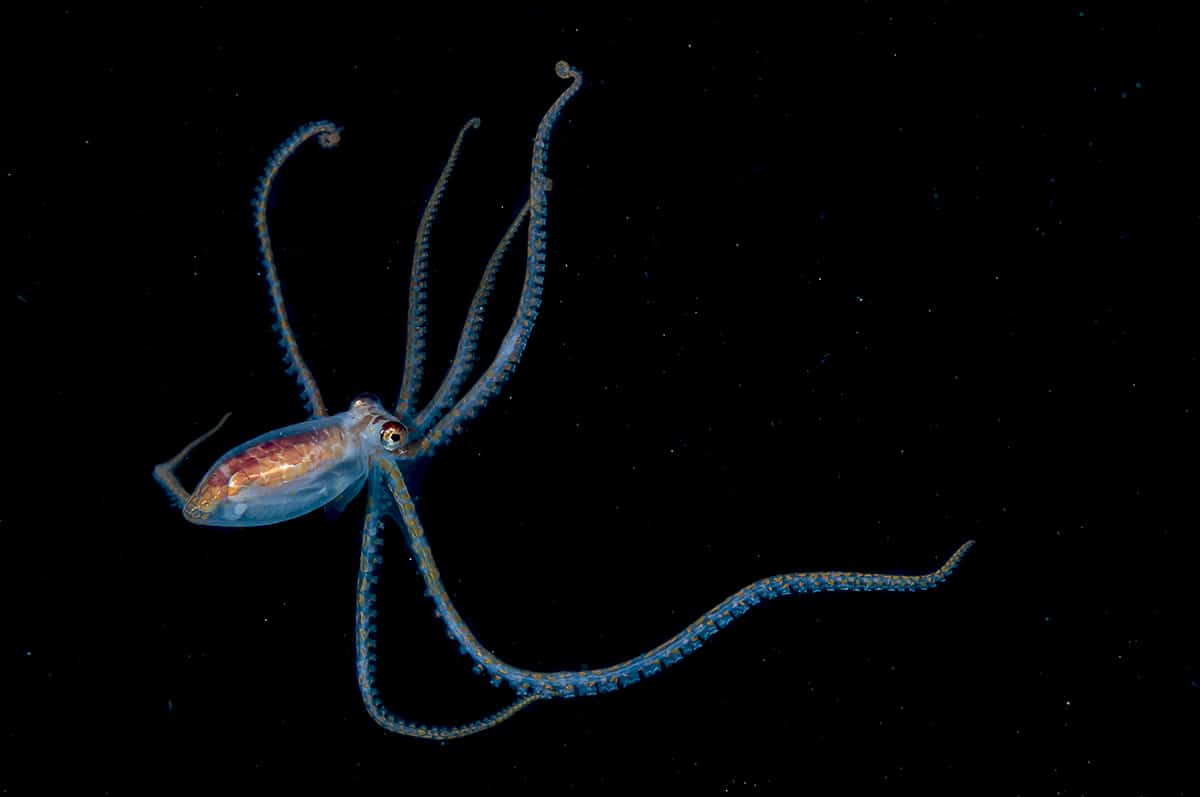 What is the appeal of blackwater photography for you?

Because most of the blackwater creatures are larvae, they are mostly transparent, and some of them even expose their organs. The most interesting thing about blackwater photography is that larvae and adults are totally different. I didn’t know what I would get before shooting. For example, the stomach of some species of flounder larvae is exposed outside the body. Because of that, the viewers are stunned by these precious pictures. I hope that everyone can understand this strange and beautiful new world through my photos. The fun of shooting in blackwater is that you can meet unknown larvae. Most of larvae have exaggerated and transparent looks, so I want to show these incredible alien-like creatures through photography.

Do you have a most memorable photo?

The larva of Wunderpus [see lead image]. Unlike the adult, the head is very large and the body is transparent. Especially, when it opens the tentacles completely. 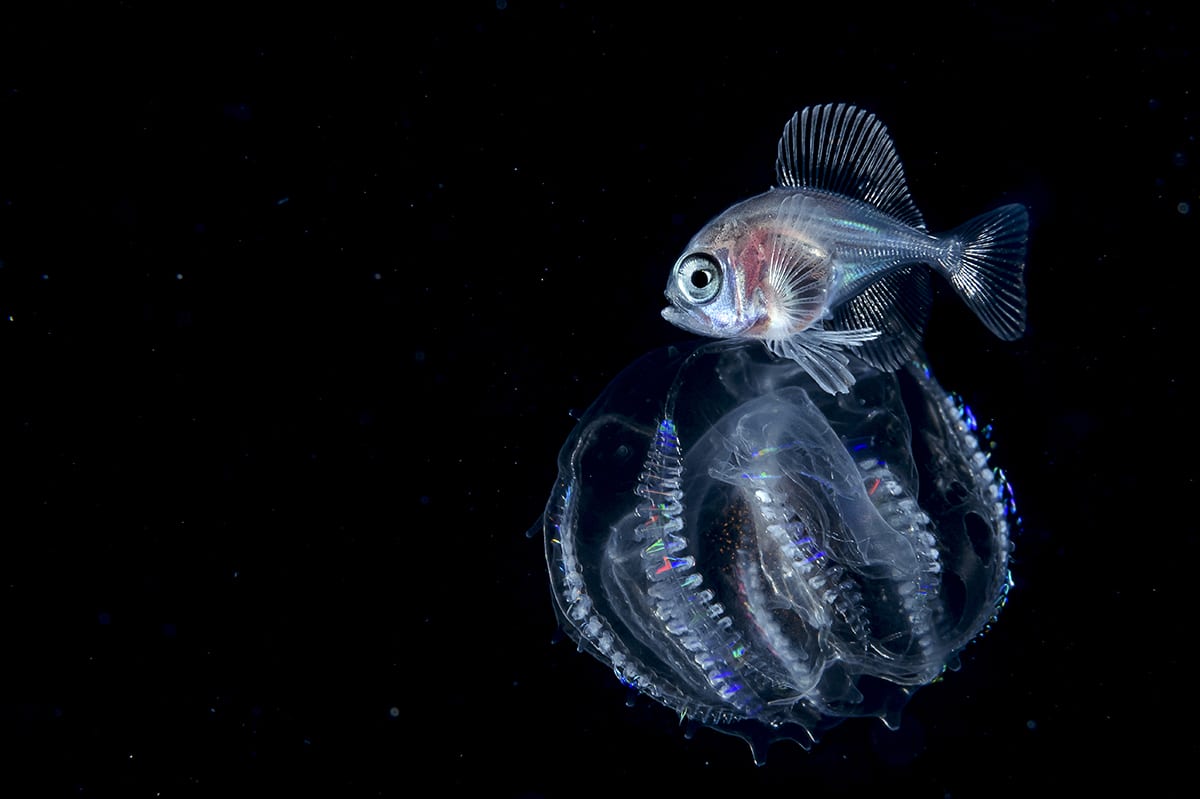 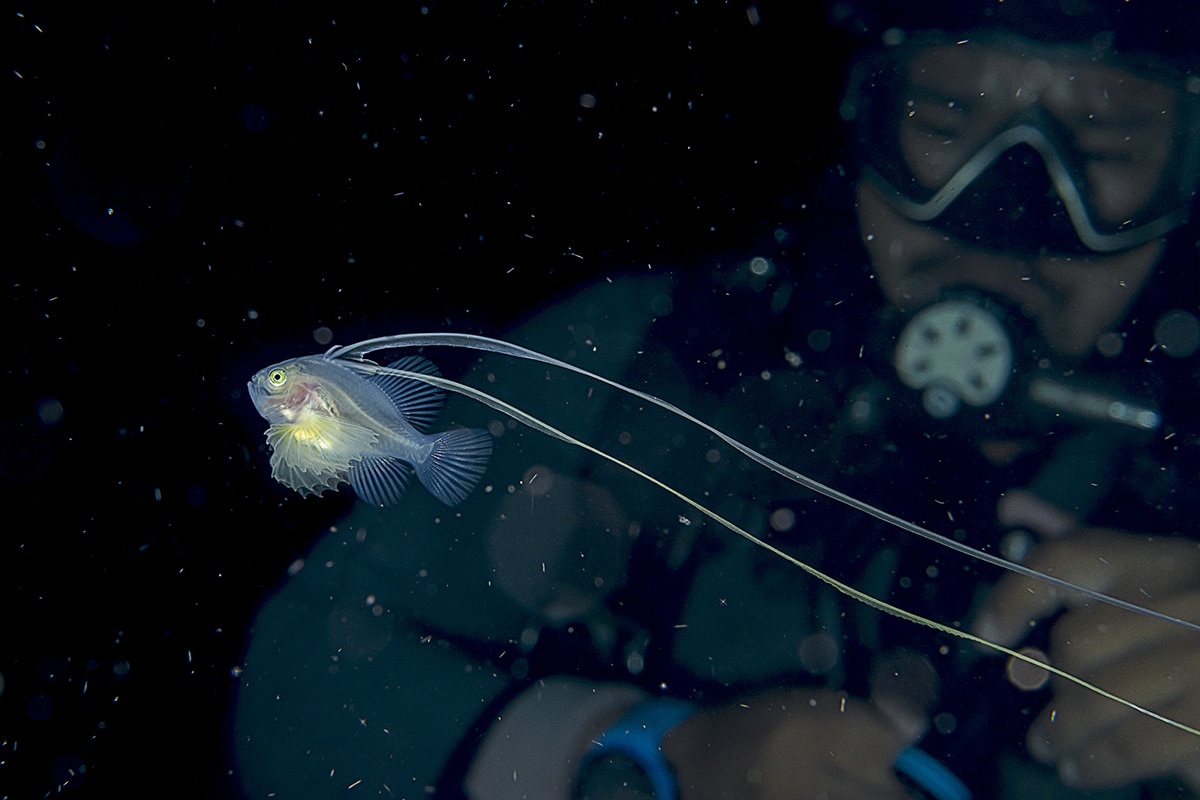 How Cool Is This Blackwater Photography? Share
Like My Modern Met on Facebook
Get Our Weekly Newsletter
Become a
My Modern Met Member
As a member, you'll join us in our effort to support the arts.
Become a Member
Explore member benefits