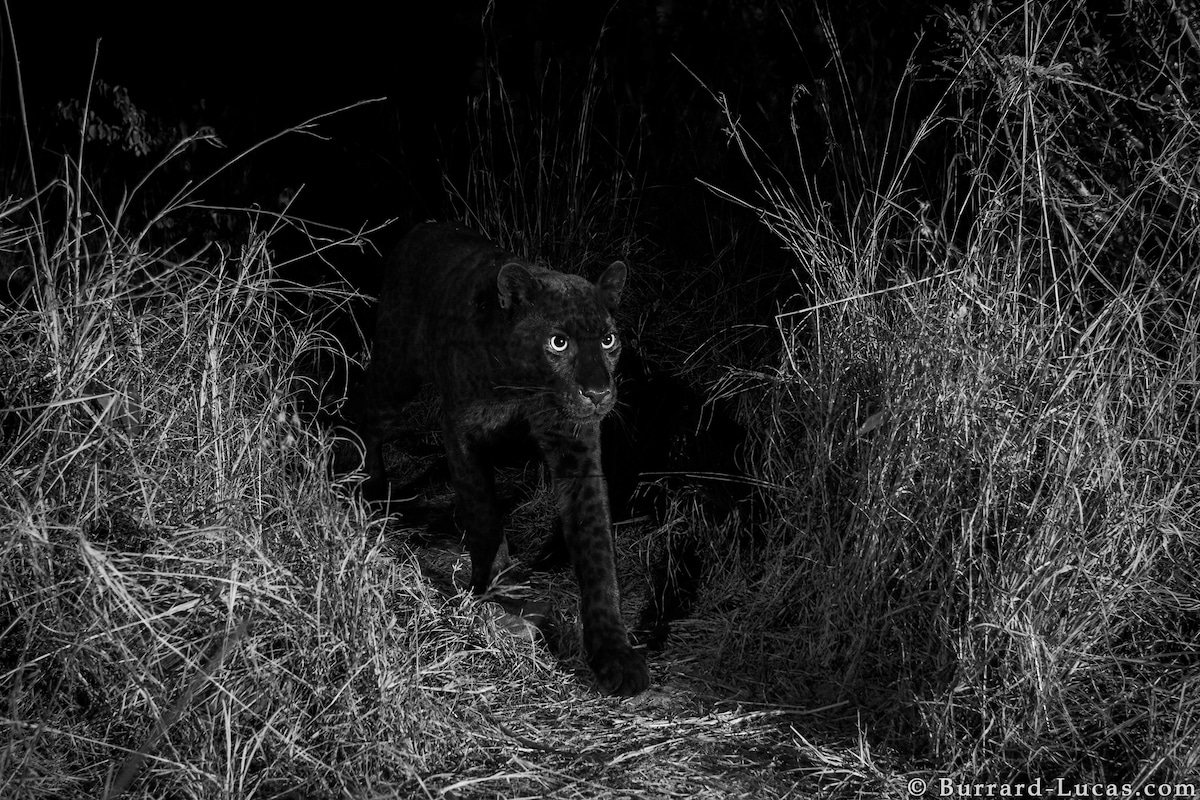 British wildlife photographer Will Burrard-Lucas is helping make history with his recently captured images of an elusive black panther in Kenya. While sightings of black panthers—also known as black leopards—have been continuously reported, until now there has been almost no photographic evidence of their existence. As only about 11% of all leopards are black, getting one on film, particularly in Africa, is no easy feat.

Black panthers get their color due to an overabundance of melanin that makes skin or fur appear black. Though black leopards in Southeast Asia have been photographed hundreds of times by scientists, evidence of these rare cats in Africa was largely hearsay until now. This all changed when word started to get out that there had been consistent black panther sightings at the Laikipia Wilderness Camp in Kenya.

Burrard-Lucas, who has been working as a full-time wildlife photographer for nearly 10 years, couldn't resist the opportunity to get this elusive animal on camera and so he headed down to Africa. Using a camera trap system that included a Camtraptions motion sensor, Burrard-Lucas was able to come back with a series of incredible imagery that helps concretely confirm the presence of black panthers in the area for the first time in nearly a century.

To assist in the process, Laikipia Wilderness Camp owners Steve and Annabelle Carey introduced the photographer to Luisa Ancilotto. Ancilotto leaves near the camp and was familiar with the habits of the black leopard. “She told us as much as she knew about the leopard’s habits and territory,” shares Burrard-Lucas. “Then Steve managed to pick up some fresh leopard tracks nearby and followed them to a path that leopards seemed to be using. I set up my camera traps up on this trail and it was there that I captured my first image of the black leopard.” 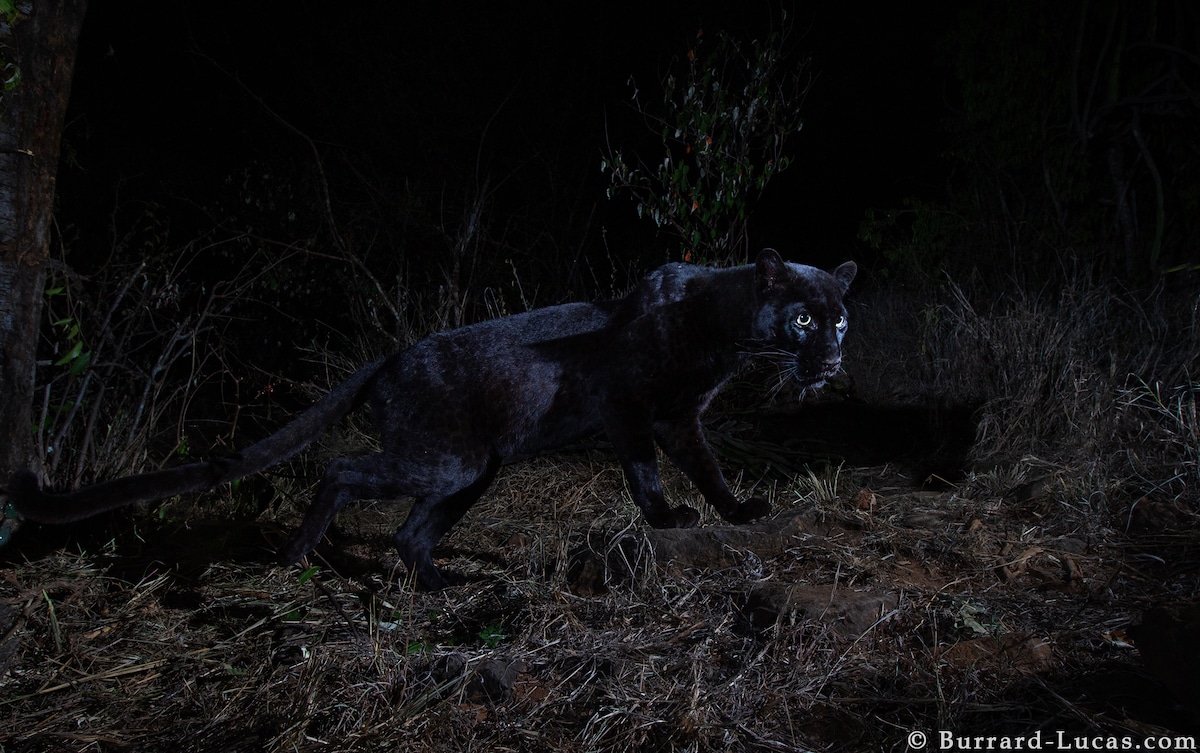 While the first night didn't yield any sighting, Burrard-Lucas was in luck after a few days. “I checked them and by the time I got to the last camera, all I had seen were pictures of hyenas but no leopards. I had a quick look at the last trap, not expecting to find much,” he writes. “As I scrolled through the images on the back of the camera, I paused and peered at the photograph below in incomprehension… a pair of eyes surrounded by inky darkness… a black leopard! I couldn’t believe it and it took a few days before it sank in that I had achieved my dream.”

Over the next few days, Burrard-Lucas moved around his setup as he began to understand the black panther's movements and continued to capture stunning photographs of this majestic animal. The photographs are all the more thrilling when one considers that one of the last times a black leopard was photographed in Africa was 1909. This photograph, taken in Addis Abada, Ethiopia, is in the National Museum of Natural History in Washington, D.C. in Addis Ababa. Though there have been previous reports of black leopards in Kenya, none have been accompanied by images of the melanistic cat.

Additionally, researchers from the San Diego Zoo and Loisaba Conservancy obtained video footage of the Laikipia county black leopard and recently published their observations in the African Journal of Ecology. Along with a recently discovered image of a black panther taken by the Ol Ari Nyiro Conservancy in 2007, these images are a rare glimpse of the elusive animal. 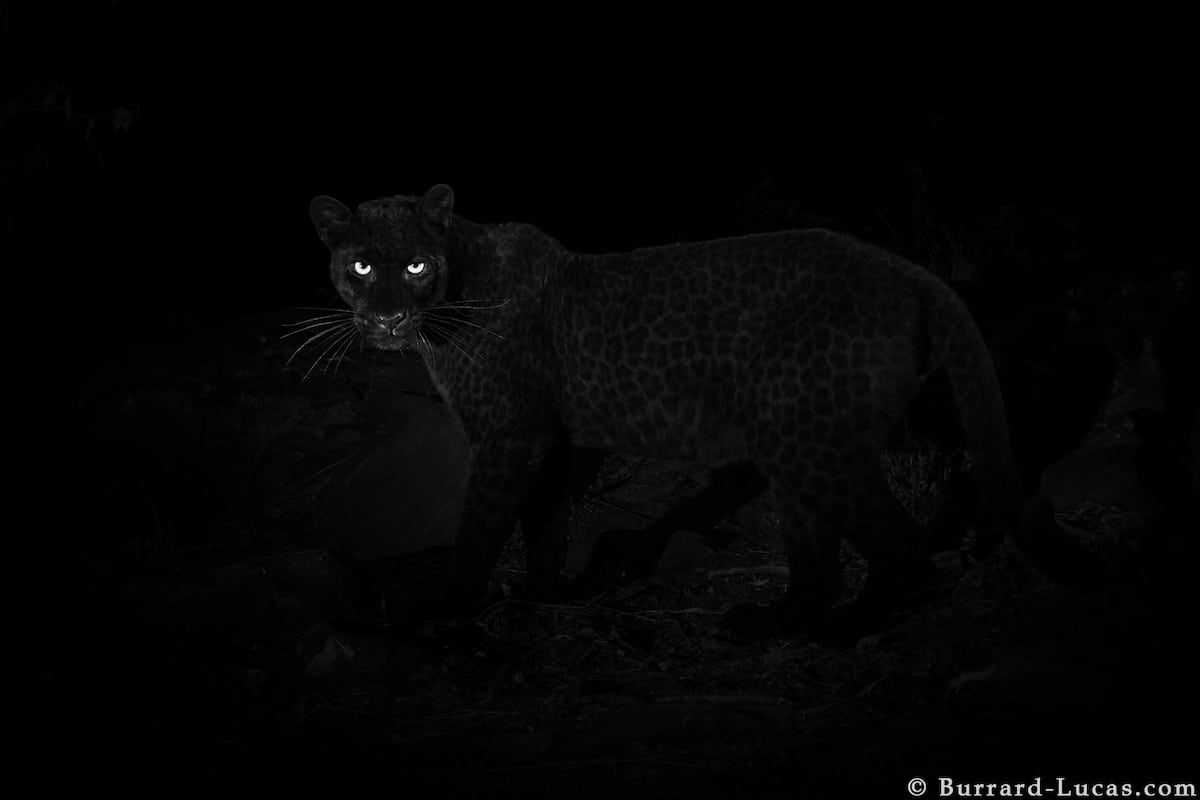 “Collectively, these images are the first reported in nearly 100 years that confirm the existence of black leopard in Africa, and the first in Kenya,” the researchers state.

For Burrard-Lucas, the results of his trip were better than he ever could have dreamed. “As far as I know, these are the first high-quality camera trap photographs of a wild melanistic leopard ever taken in Africa. I can still scarcely believe that this project–which started out as a speculative recce trip–has paid such spectacular dividends!”

The photographer is careful to mention that he decided to release the name of the location where he photographed the black panther for good reason. “Fortunately trophy hunting is illegal in Kenya. My take is that the benefits of promoting tourism far outweigh the risks and hence I have stated the location. Tourism brings valuable revenue to these places and is often a critical source of funding for conservation efforts.” And as Burrard-Lucas intends to head back soon, we're hopeful that these are just the first of many African black panther photographs we'll be seeing.

Read more about Burrard-Lucas' African adventure on the Camptraptions blog.

These rare photos of an African black panther were taken by wildlife photographer Will Burrard-Lucas during a recent trip to Kenya. 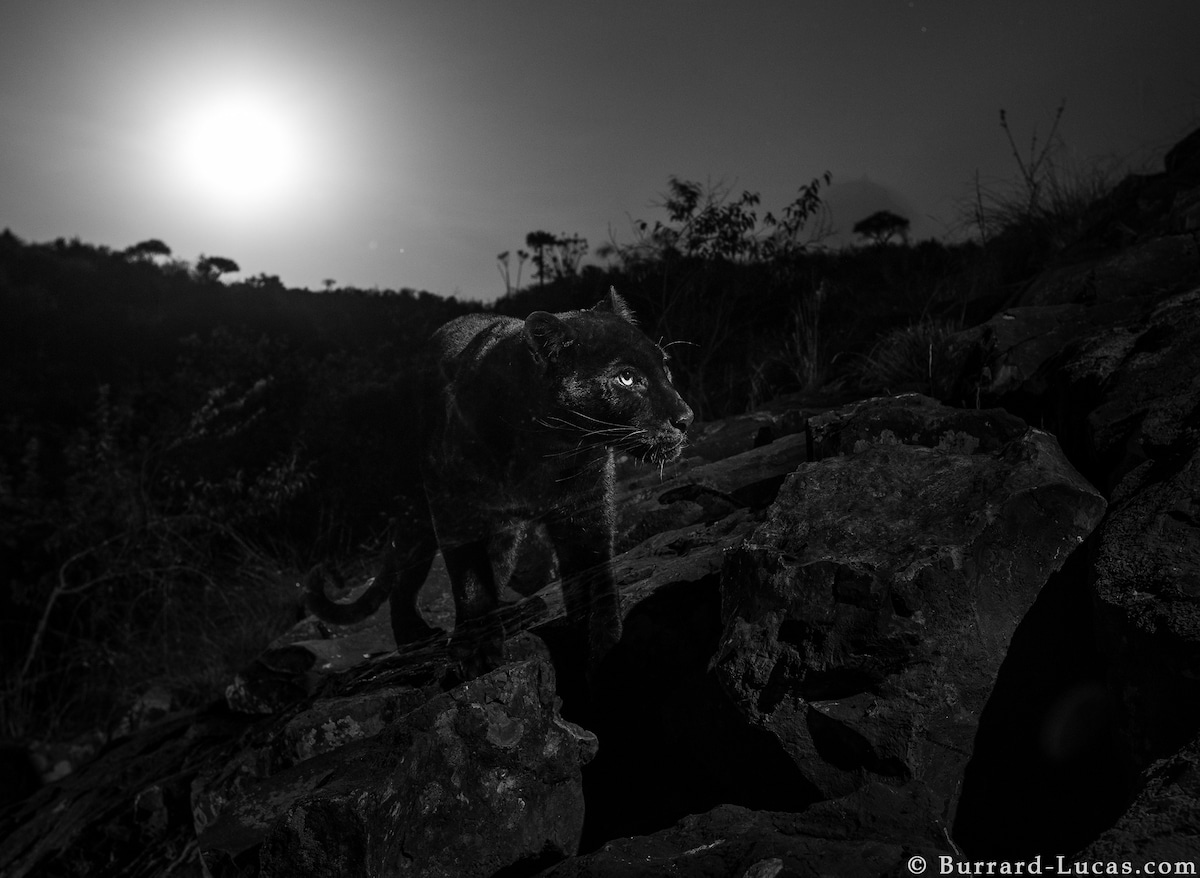 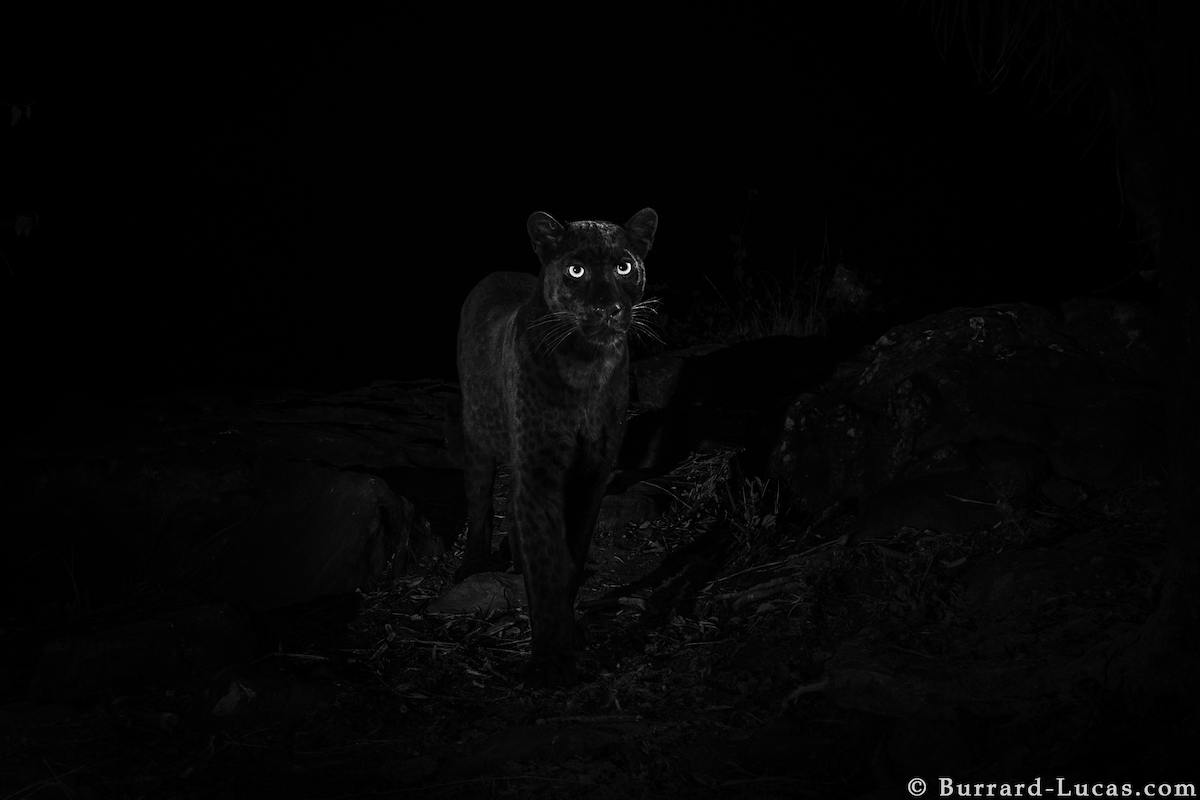 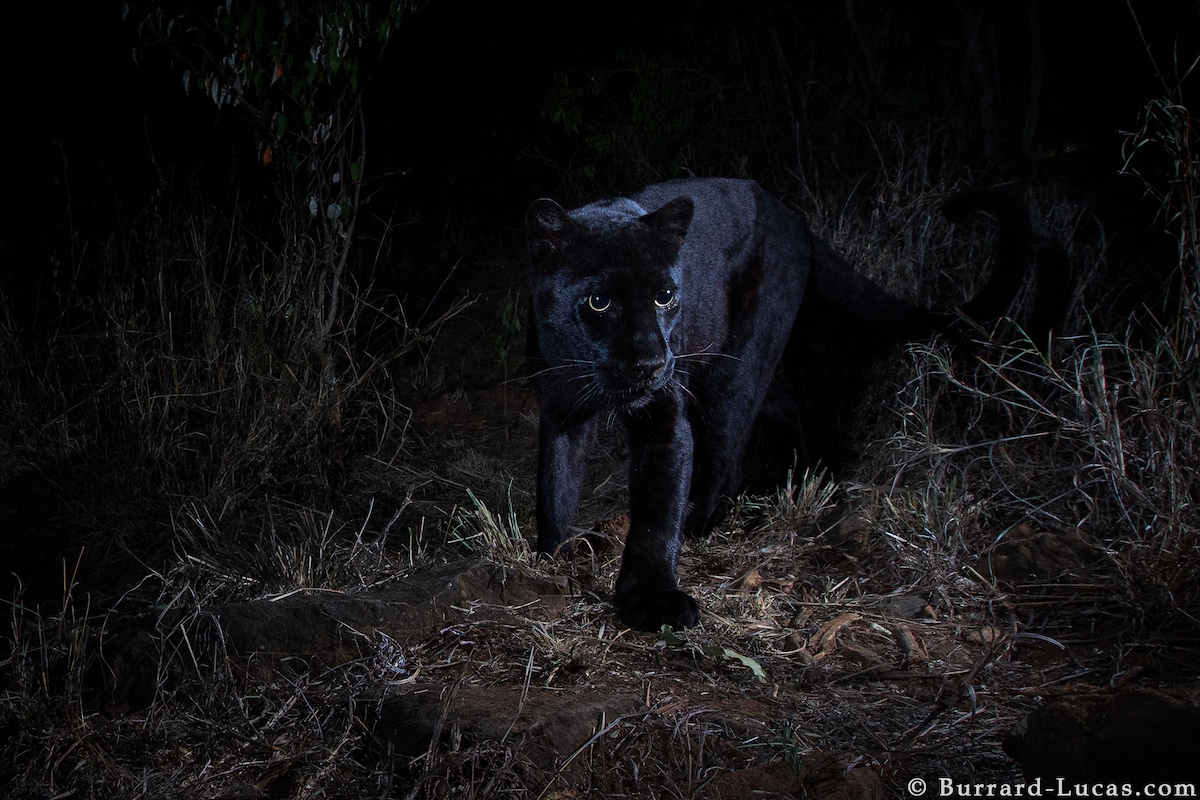 The photos were taken with camera trap systems consisting of a Camtraptions motion sensor, which wirelessly triggers a high-quality DSLR or mirrorless camera and two or three flashes. 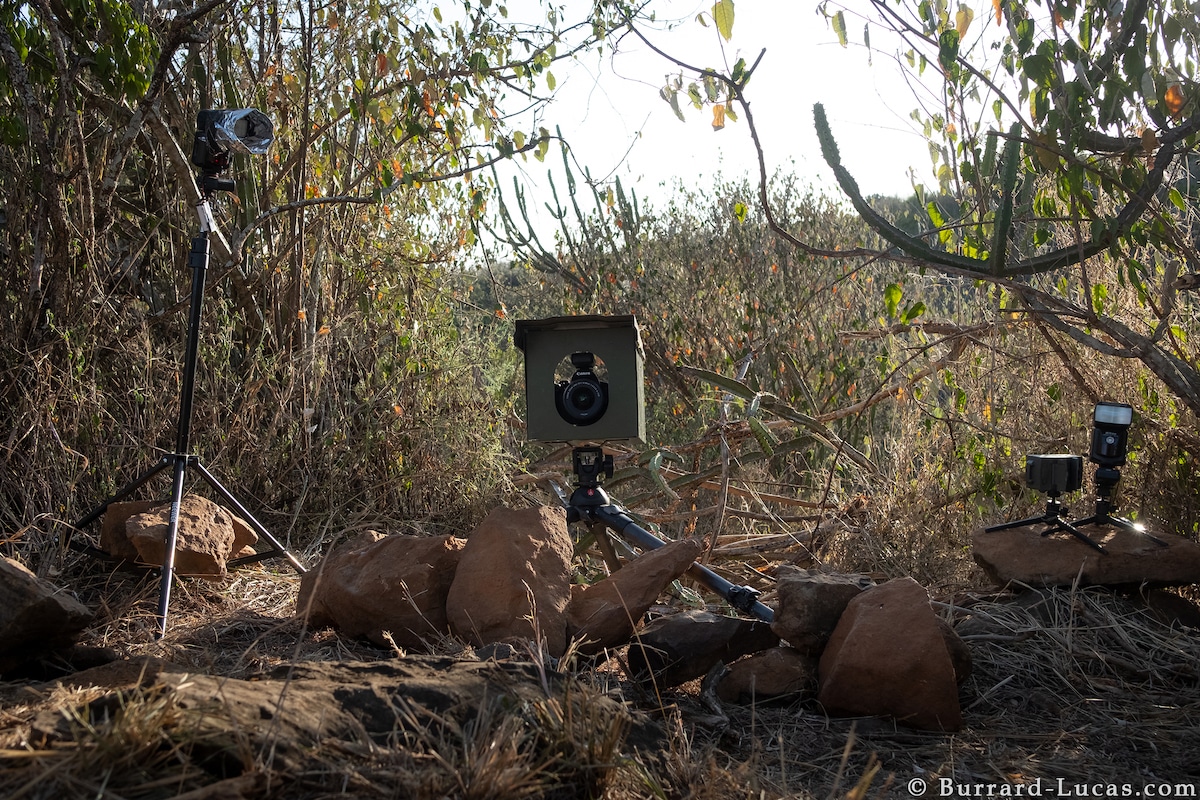 Learn more about the wildlife photographer's adventure in this behind-the-scenes video.

My Modern Met granted permission to use photos by Will Burrard-Lucas.

Do you love the beauty of the black panther? Share
Like My Modern Met on Facebook
Get Our Weekly Newsletter
Become a
My Modern Met Member
As a member, you'll join us in our effort to support the arts.
Become a Member
Explore member benefits