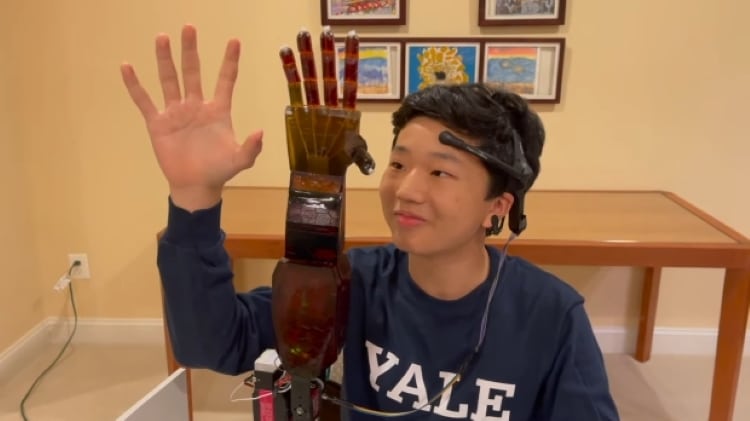 People took on all types of interesting projects in their down time during the pandemic. Bread baking, gardening, knitting—these were common hobbies that were taken up, but there have been a few others with far more ambitious projects. Benjamin Choi, a high schooler in Virginia, began working on an invention that would quickly go beyond the scope and scale of a “pandemic project.” He set out to design and build an affordable robotic, prosthetic arm that could be mind-controlled without requiring any invasive brain surgery.

In 2020, Choi, then in 10th grade, planned to spend his summer in a lab, researching aluminum fuels. Because of the pandemic, the lab was shut down, and he found himself with unexpected free time. This was when he remembered a 60 Minutes segment he'd watched in third grade, about neural interfaces being used to control prosthetic limbs. In the episode, researchers implanted tiny sensors into the motor cortex of a patient's brain, allowing her to move a robotic arm using her thoughts. “I was really, really amazed at the time because this technology was so impressive,” Choi says. “But I was also alarmed that they require this really risky open brain surgery. And they're so inaccessible, costing in the hundreds of thousands of dollars.”

Undaunted by the fact that it had taken a team of researchers to create the technology in the documentary, Choi set out to design an improved version himself. He set up a makeshift laboratory in his basement, on the ping-pong table, where he would work up to 16 hours a day. With past experience in programming and robotics—thanks to his participation in competitive robotics up to the world championship level—he was able to independently design the first version of his robotic arm using his sister's $75 3D printer. The arm took 30 hours to print, and since the printer could only print pieces up to 4.7 inches, Choi had to bolt and rubber-band the pieces together to create the prototype. This initial version worked using brain wave data and head gestures. The brain wave interpretation algorithm he was to write from scratch, for which he's now acquired a provisional patent, was still to come.

In October 2020, he received a manufacturing grant from polySpectra, Inc., a company that produces durable 3D-printed materials, to produce his arm and move it out of the prototype stage and into a model more viable for daily use. The next year, he won funding from the Massachusetts Institute of Technology (MIT) to continue his research, as well the opportunity to work with experts at the university.

After over 75 design iterations, Choi's non-invasive, mind-controlled arm is now made from engineering-grade materials and operates using the aforementioned algorithm, which is driven by artificial intelligence that interprets a user's brain waves. It uses electroencephalography (EEG) to avoid the invasive techniques of other prostheses, and instead records the brain's electrical activity using a sensor placed on the head. To help create this algorithm, Choi worked independently with six adult volunteers, collecting their brain wave data and training the AI to distinguish between brain signals. “The more you use it, the more it figures out specifically how you think, what your brain wave patterns are,” he explains, “until the accuracy really increases significantly for you over time.” 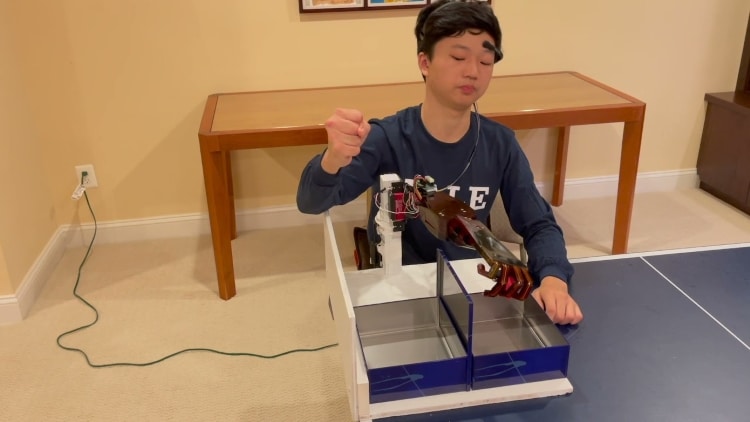 Choi demonstrates the functionality of his robotic prosthetic arm.

Not only did Choi achieve the non-invasive technology he set out to design, but the arm remains affordable—it costs under $300 to manufacture. Choi even posted instructions for the build online, and shared the price comparison: “At roughly US $150 the arm represents a significant cost reduction compared to commercially available prosthetics (myoelectric and ECoG prostheses can range anywhere between US$10,000 and US$450,000).”

Now, at 17 years old, the invention has earned him a spot in the top 40 finalists of the 2022 Regeneron Science Talent Search, the United States' oldest and most prestigious science and math competition for high school seniors. He's very humble about the attention, saying, “It means a lot to me to see that my work is recognized like this. I'm definitely very grateful to be a finalist.” Choi plans to study engineering in college, and wants to continue to improve his prosthetic arm. He has hopes of conducting a clinical study with patients with upper-limb losses, moving his invention closer to being an option on the market for those in need of it. He's motivated by the experience he's already had consulting with Joseph Dunn, an upper-limb amputee.

Six months after Choi started building the arm, he posted a YouTube video demonstrating its dexterity. This caught the attention of Dunn, and Choi began consulting with him remotely about the design. To him, working with Dunn took the project further than just engineering. “Maybe this sounds a little cliché,” he says, “but you can really help people, I think, through engineering, through technology. Working with Mr. Dunn made this project really impactful and really inspiring and motivating.” Thinking to the future and how he can continue helping others, Choi says his algorithm could have uses beyond prosthetics, such as controlling assistive devices like wheelchairs and helping those with ALS to communicate. “Brain wave interpretation is a really big emerging field,” he says. “My algorithm is the best of all the algorithms reported in literature by a pretty significant margin.” (It's true—Choi's algorithm performs with a mean accuracy of 95 percent, compared to the previous standard of 73.8 percent for similar ones.) “I think it could have big applications going forward.”

17-year-old Benjamin Choi designed a 3D-printed prosthetic arm that can be controlled by the mind.

Watch as Choi walks through the details of his design with polySpectra.

All images via Benjamin Choi.