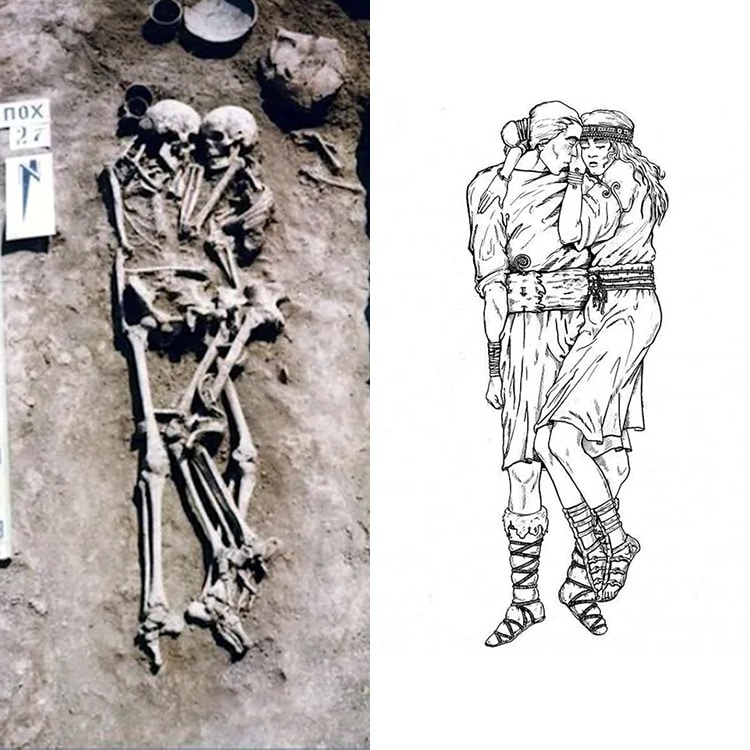 Many couples dream of being together forever, a desire that usually extends their final resting place. Well, one man and woman from the late Bronze Age have been discovered near Petrykiv village in Ukraine, locked in an affectionate embrace for 3,000 years. The man's skeleton lays flat on the ground, while his lover wraps both of her arms around his neck and curls her body against his side.

The pair originated from the prehistoric Vysotskaya culture, which was located in modern-day western Ukraine. Due to the naturalness of the woman's position, archaeologists believe that she was likely buried alive with her partner. “From our point of view, this woman did it voluntarily,” Professor Mykola Bandrivsky, director of the Transcarpathian branch of the Rescue Archaeological Service of the Institute of Archeology of Ukraine, says. “Maybe the woman did not want to live with some other man and get used to some new way of life. So, she preferred to pass away with her husband.”

A sketch imagines what the couple looked like at the time of their death. Both individuals were decorated in bronze decorations and buried alongside pottery items, which was typical of burials from this era. “People in the Late Bronze Age believed in the eternal life of the human soul,” Dr. Brandrovsky continues. “We suppose such a decision was dictated only by [the woman's] own desire, and her attempt to stay with her beloved one. She may, for example, have drunk a chalice of poison to make joining her husband easy and painless.”

A couple from the Bronze Age were discovered locked in a loving embrace 3,000 years after they were buried near Petrykiv village, in Ukraine.