New Field of Light and Moon-Inspired Art by Bruce Munro 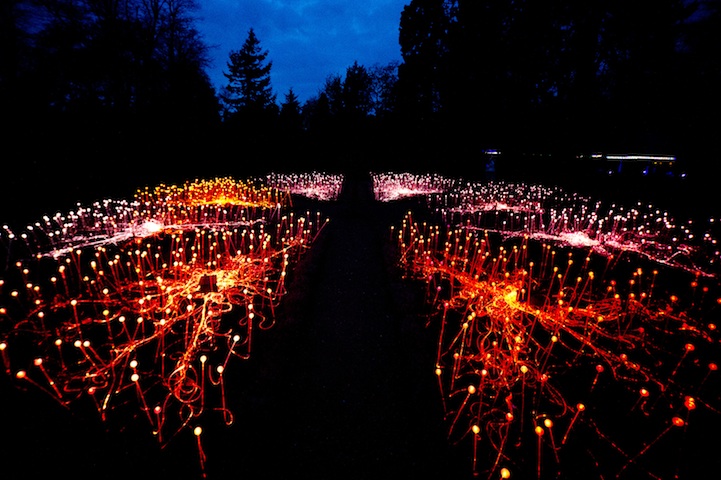 A brand new field of glowing light! From now till January 4, 2015, Waddesdon Manor in the UK is exhibiting seven large-scale light installations by British artist Bruce Munro. This is the third time Munro has exhibited at Waddesdon. Four out of the seven installations were conceived specifically for this year's show. One brand new work, we've never seen before, is Moon Harvest, twenty cylindrical bales of straw which have been brilliantly used as canvases for light. You'll also find his tried and true Field of Light, which he first debuted in 2004, and Beacon, a large dome of glowing bottles he first created in 2013. All in all, Winter Light at Waddesdon will delight its visitors as the Gardens turn into a winter wonderland starting from 4pm. See below for what's in store.

Above: Field of Light
Is Munro's most well-known and iconic artwork, and his “personal symbol for the good things in life.” He has experimented with this site-specific installation's form and created continually changing iterations of it since he first created the work in 2004. This iteration is Munro's World War One commemorative work. It is created in the circular Rose Garden to represent a poppy. The spheres and stems quietly wait until darkness falls and then bloom with gentle rhythms of coloured light.
Bruce Munro, Field of Light at Waddesdon Manor, UK, 2014 (Photo by Ben A. Pruchnie/ Getty Images for Waddesdon Manor) 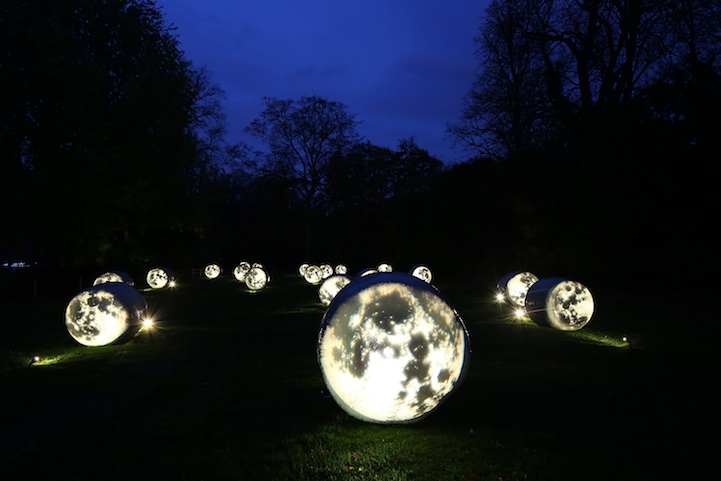 Moon Harvest
This new site-specific installation, seen for the first time, is inspired by the term ‘Harvest Moon' which refers both to the traditional timing of harvest which would coincide with a full moon to lengthen the working day, and to the golden appearance of the moon at harvest time, an optical effect created by the levels of dust in the atmosphere. Munro lives in Wiltshire and notes that “living in the country piques one's awareness of the seasonal calendar and how it affects the landscape.” As often with Munro's work, the piece employs familiar objects, in this case 20 cylindrical bales of straw wrapped in plastic, which come from the Waddesdon Estate, which are given a wholly new dimension as canvases of light. His visual pun yields a bumper crop of full moons.
Bruce Munro, Harvest Moon, Waddesdon Manor 2014 photograph by Mark Pickthall 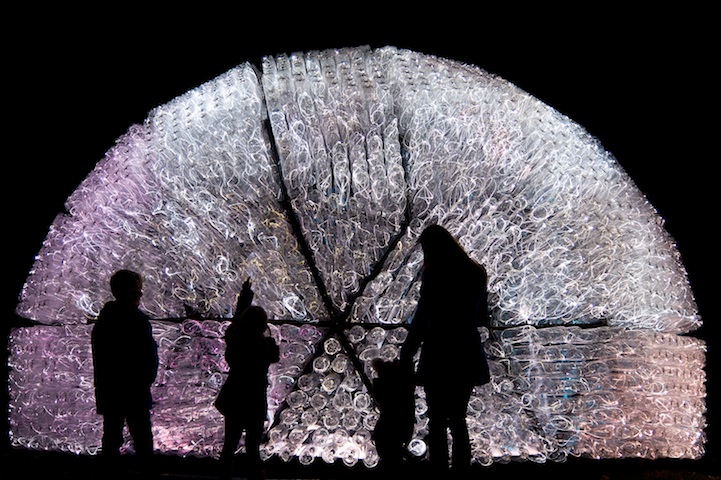 Beacon
In recent years, Bruce Munro has created a number of sculptural installations using both optical fibre and PET bottles, illuminated from within. Water Towers, which featured in the exhibition at Waddesdon last year, employed a similar principal. Beacon is built on the superstructure of a geodesic dome which supports the glowing bottles. The work was first created in the summer of 2013 to benefit the UK charity ‘Cancerkin', and was installed at the top of Long Knoll in Wiltshire, near Munro's home, as a message of hope for cancer sufferers and survivors.
Bruce Munro, Beacon at Waddesdon Manor, UK, 2014 (Photo by Ben A. Pruchnie/ Getty Images for Waddesdon Manor) 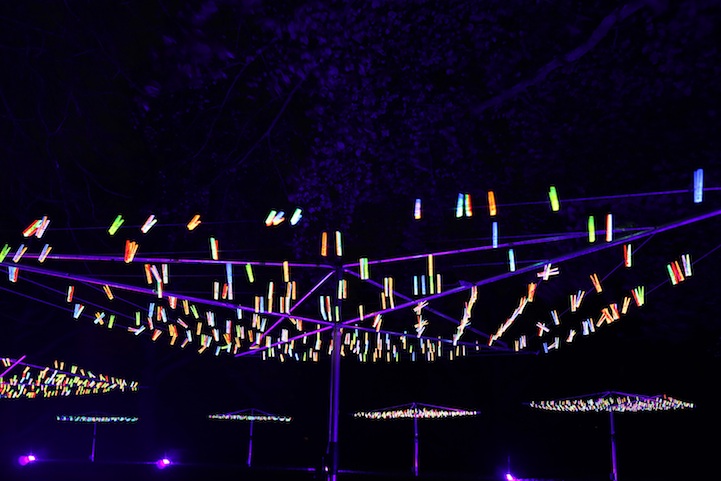 Gathering of the Clans
This new piece of work evokes Munro's time in Australia, where he lived as a young man, working in the design industry. He and his fiance, later his wife, moved from Sydney to a house in a sprawling wood of gum trees, close to a beach, where great flocks of cockatoos would congregate. The memory inspired this installation, in which the sounds of cockatoos combines with the iconic Australian Hills Hoist clothes line and fluorescent acrylics to capture the essence of a time and place.
Bruce Munro, Gathering of the Clans, Waddesdon Manor 2014 photograph by Mark Pickthall 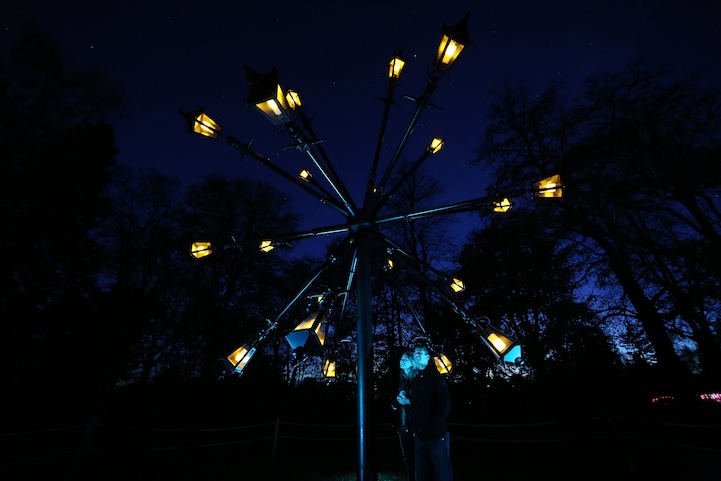 The Good Seed
This new creation is inspired, like several of Munro's pieces of work to date, by his love of literature, in this case C.S Lewis's Chronicles of Narnia, and The Lion, the Witch and the Wardrobe in particular. Its monumental structure is formed by 19 lampposts, which branch out like a giant seed head from a central core. In the book the eternally burning Victorian iron lamppost stands in a silent snow-laden forest and marks a point between two worlds. The piece is described by Munro as a protective beacon of light.
Bruce Munro, The Good Seed, Waddesdon Manor 2014 photograph by Mark Pickthall 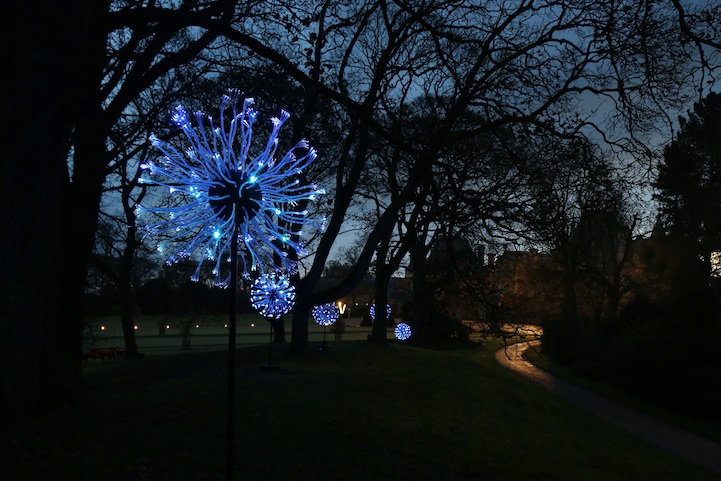 Eden Blooms
Evolving from Munro's fascination with the development and repetitive use of singular components, each ‘bloom' is built around a central spherical core. Partly inspired by his recent work in the United States in several important botanical gardens and conservatories including Longwood, near Philadelphia, Cheekwood in Tennessee, and Franklin Park in Ohio, the installation uses vibrant colours, akin to those found in tropical plants.
Bruce Munro, Eden Blooms, Waddesdon Manor 2014 photograph by Mark Pickthall