This past Friday, February 27, the world grieved the loss of actor Leonard Nimoy, who was best known for playing Spock on Star Trek. People expressed their condolences via Facebook, Twitter, and other social media sites, and the Canadian Design Resource (CDR) even tweeted a call to action: “‘Spock' your $5 bills for Leonard Nimoy,” they wrote. If that sounds totally foreign to you, it's a cultural phenomena that involves a pen and turning the $5 bill into a convincing portrait of Spock.

The practice actually started years ago when former Canadian Prime Minister Sir Wilfrid Laurier was transformed into the pop culture icon. “This series of Canadian bills was an easy target,” explains CDR's publisher Todd Falkowsky to Quartz. “The existing portraits are quite large and can be improvised with ease, and the color of our $5's are the same blue as Spock's uniform,” he says. There's even a Facebook page dedicated to “Spocking Fives.”

In 2013, the banknote changed its design and transitioned from cotton paper to “laundry-proof” plastic polymer bills. It's now harder to draw on them with regular pen. But, even so, people have still honored Spock by digitally altering them.

While it's fun to see Spock show up in your change, defacing banknotes in Canada isn't completely legal. But, they still seem to work as currency. Falkowsky points out to Quartz, “People have always played with money this way… love notes, return to sender, birthday greetings and remixing the images. I am not sure if it makes them harder to use but I've tried one in a parking garage and it worked no problem.” 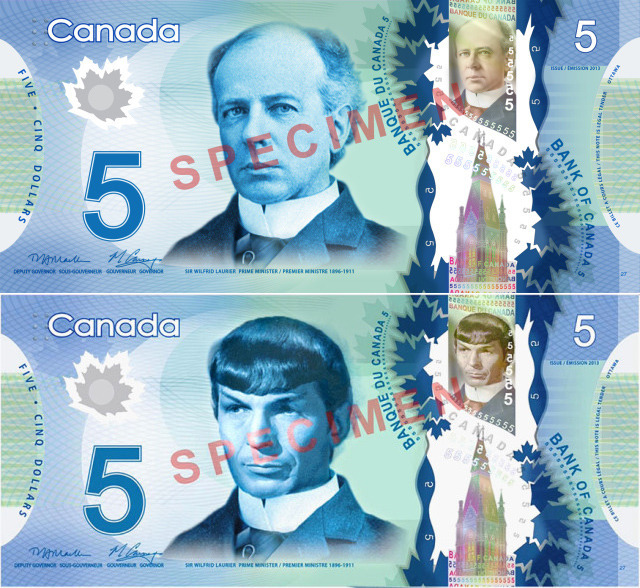 via [Mashable and Quartz]