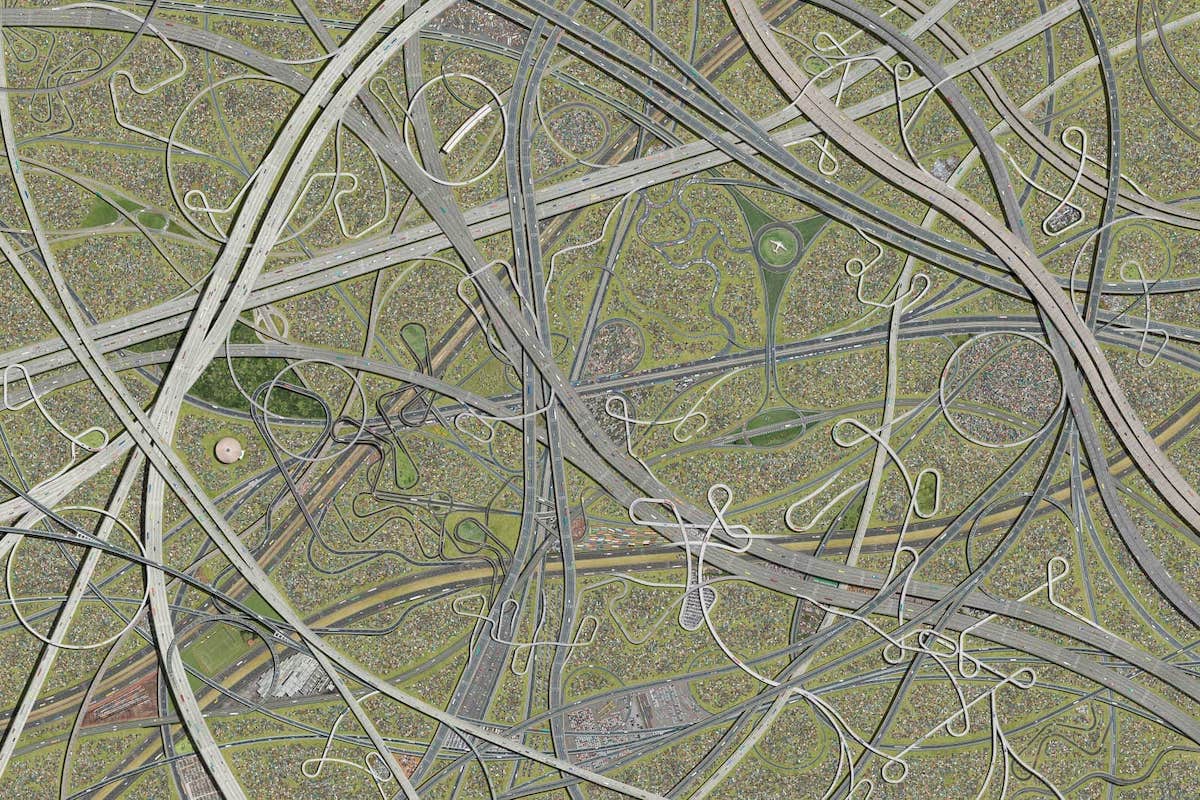 For nearly 40 years, Brazilian photographer Cássio Vasconcellos has used his camera to capture his vision of the world. After working for many years as a respected photojournalist, Vasconcellos has shifted his career to work on personal projects and exhibitions. This includes Collectives, an on-going series of mind-bending photography that forces viewers to think about their use of space.

Starting in 2008, Vasconcellos has used his love of aerial photography to create elaborate photomontages. In the finished photos, manmade items sprawl across the environment. From intertwining highways to rows of neatly parked vehicles, each image is a maze of activity.

“Collectives is the result of a need to share a critical view of the artist, who through his peculiar point of view raises important questions such as the form of occupation of the planet, the existing macro industrial scheme to supply the needs of society, the occupation of land, among others,” writes Mariana Ferman. “Through this series, Cássio intends to tackle in a forceful way—from small to large scale—the theme of globalization and the explosion of consumer goods, especially in large cities.”

By sewing together thousands of individual photographs, Vasconcellos creates fantasy worlds that look real enough to be true; and in doing so, he gives viewers pause about the marks that humans leave on the world. Beautiful, thought-provoking, and surreal, Collectives is a call for humanity to think about how it interacts with the planet.

We had the opportunity to speak with Vasconcellos about how he got his start in photography, the most difficult part of executing his Collectives, and what he hopes that people will take away from the series. Read on for My Modern Met's exclusive interview. 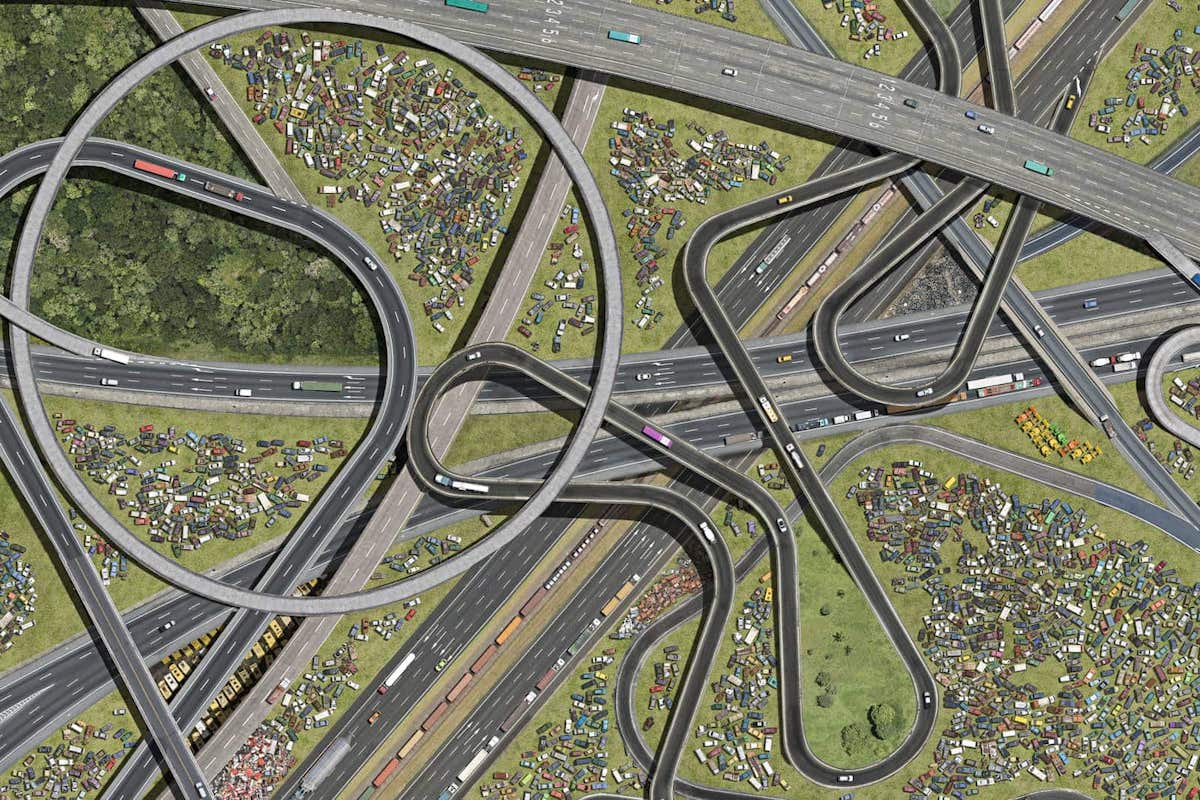 How did you first get started with photography?

I started at the age of 15 on a trip with my dad and never stopped. It was supernatural and I wouldn't know how to do anything other than photography. My parents encouraged me a lot in the beginning, especially my father who worked in the arts. 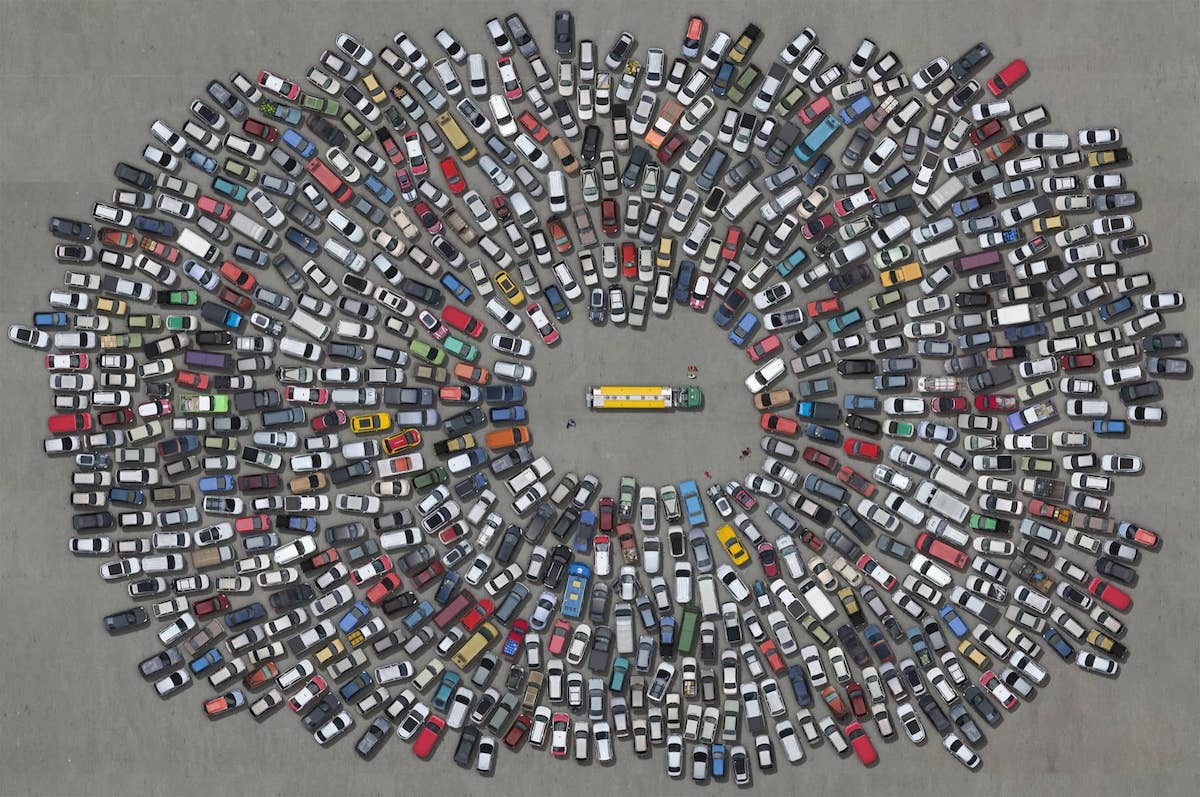 What inspired the Collectives series?

My inspiration for the Collectives series is precisely what I have seen that is happening around us: the immense amount of things and space that humanity needs to live on the planet in our time. It is scary, especially the amount of waste and scrap we produce, and it impresses me a lot. In the images, all built from hundreds or thousands of aerial photographs that I have in my collection, I reinterpret everything I see. It is my perception and, therefore, a portrait of what I think symbolizes our era.

What type of research goes into making the images?

I do a lot of research on Google Earth to discover the most interesting places in addition to those I already know from my experience in aerial photography. 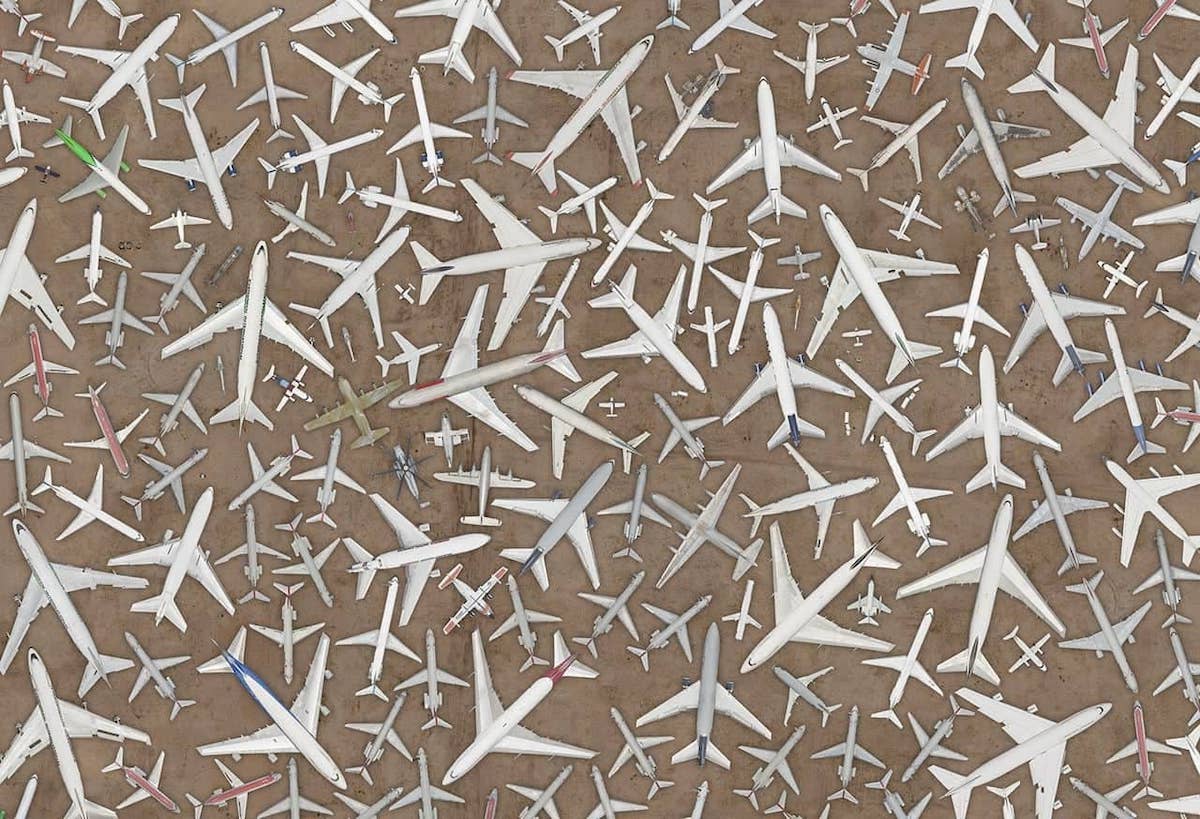 What is the most challenging aspect of the project?

The great challenge of creating these types of images, in addition to the technical complexity and the incredible amount of time they take, is to bring all these different photographs together and build a landscape that is very credible and that makes the viewer think that it really exists.

Airport, for example, was a year of work and about 800 hours of computer work, starting with the shooting of the images, which in and of themselves were already difficult. I had to fly over different airports and always shoot from a very difficult angle, which is 90 degrees looking down. The assembly on the computer was also extremely complex, as I have to match the lights and proportions of all the elements. But in the end, this airport seems to really exist, even with its strange architecture. 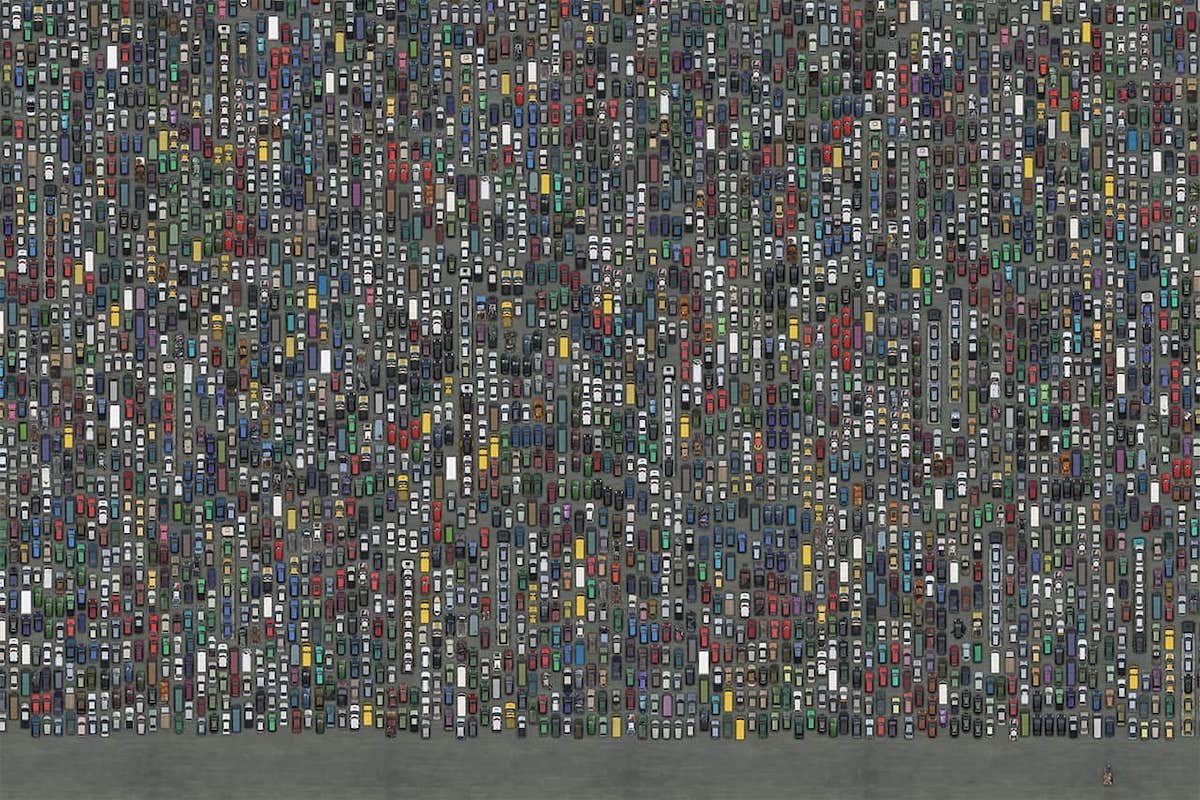 What did you learn about or what surprised you during the making of Collectives?

We usually say that art imitates life, but I was very impressed when I saw an article in newspapers and saw that life also imitates art. In this case, I saw an “imitation” of my first work in this series. In 2008, I built a gigantic image, measuring 2.2 x 12 meters, that looked as if it were a yard with 50,000 vehicles—something completely unthinkable and never seen.

The idea was to create something surreal, which was credible for the quality of the photographic montage; but, for the size of what was being represented, impossible to exist. And in 2018, I saw in the newspaper this image of an even bigger area in the American desert that was being used to store VW diesel cars. Reality far surpassed what I thought was possible. 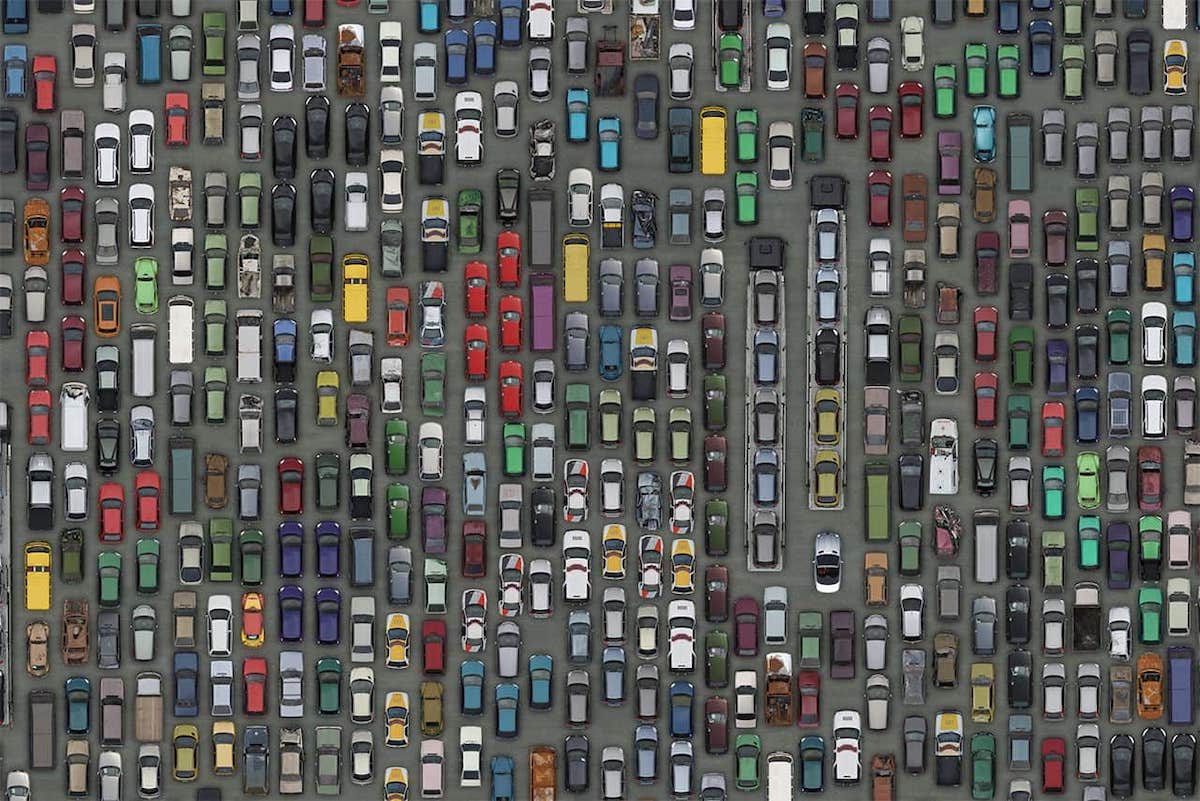 How do you hope that these photos change the way that people think about the urban landscape?

I hope that these images can help other people to better reflect on our current way of life, and the many distinct scars we make on the planet.

I'm now working on another image from the Collectives series, taking advantage of the quarantine time to dedicate myself full time to this new image, which will be my biggest and most complex work. 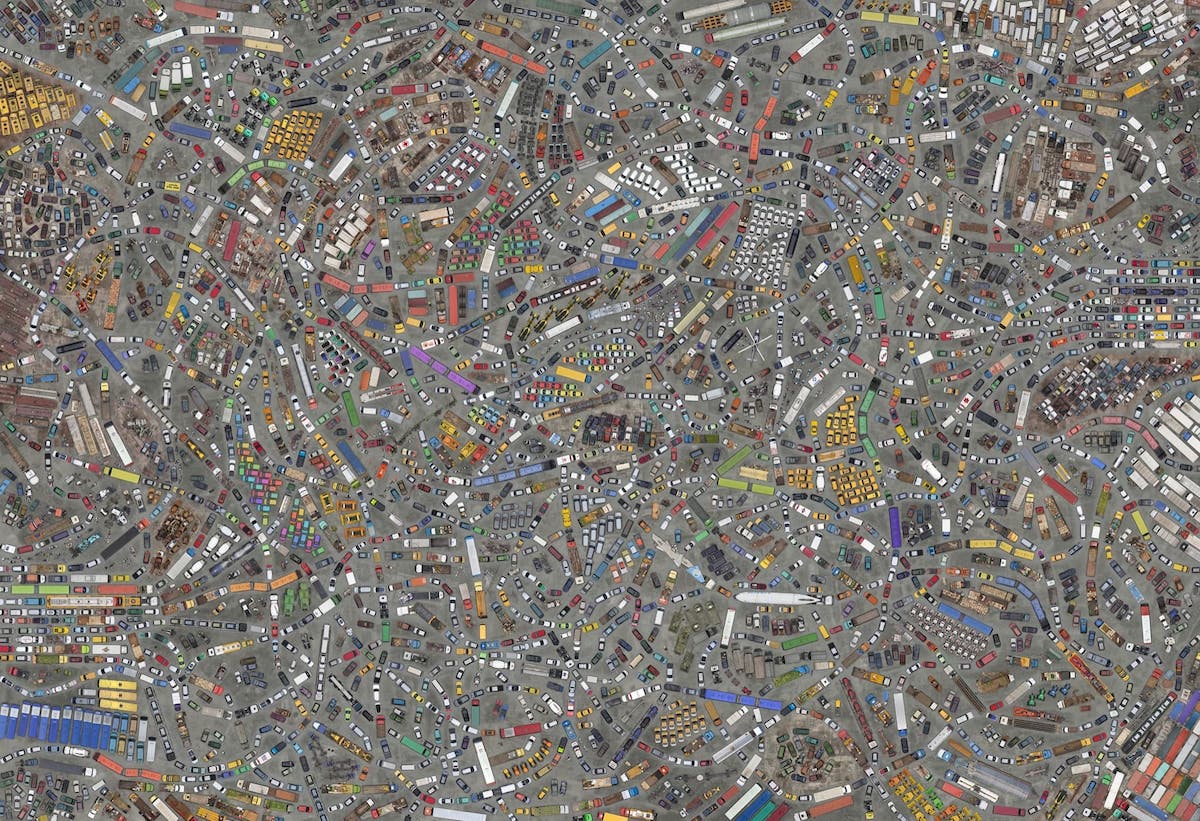 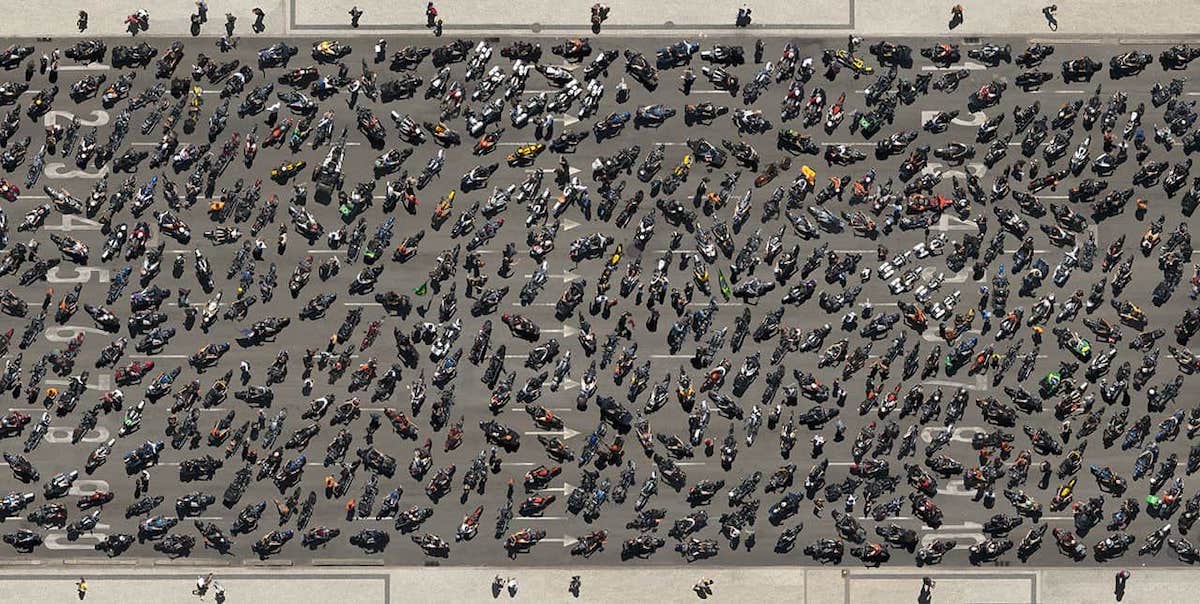 Love the creativity? Share
Like My Modern Met on Facebook
Get Our Weekly Newsletter
Become a
My Modern Met Member
As a member, you'll join us in our effort to support the arts.
Become a Member
Explore member benefits