Every year, scientists discover thousands of new species, which means there are probably quite a few animals you've never heard of. It also means that researchers need to create names for these new, rare animals. It's no surprise that celebrity and pop culture names are often a source of inspiration.

Whether it's the uncanny resemblance of the new Donald Trump moth or the shimmy of the Shakira wasp, appearance and behavior often have a hand in the naming. In the case of a discovery in Laos, a lost musical legend was the muse for a new snake species.

The Ziggy Stardust Snake was one of 163 new species found in the Southeast Asian country. While its official name is Parafimbrios lao, the snake's iridescent skin gives it a striking correlation to David Bowie's iconic character.

Read on for more celebrity-named animal species you never knew about.

In 2015, Dr. Porrawee Pomchote discovered this orange newt, adding it to the list as the fourth newt species in Thailand. Its ridged anatomy recalls the beloved Klingons of Star Trek. Unfortunately the Klingon Newt isn't quite as hearty as its humanoid counterpart. Deforestation is a big threat to the species.

Barack Obama has several species named after him, but the newest is a fish from his native Hawaii. Discovered in June 2016, the colorful Tosanoides obama is a reef fish. The name is more than an homage to the former president's birthplace. This colorful discovery is actually the only fish to live exclusively in the Papahānaumokuākea Marine National Monument, a protected reserve that President Obama expanded in August 2016. 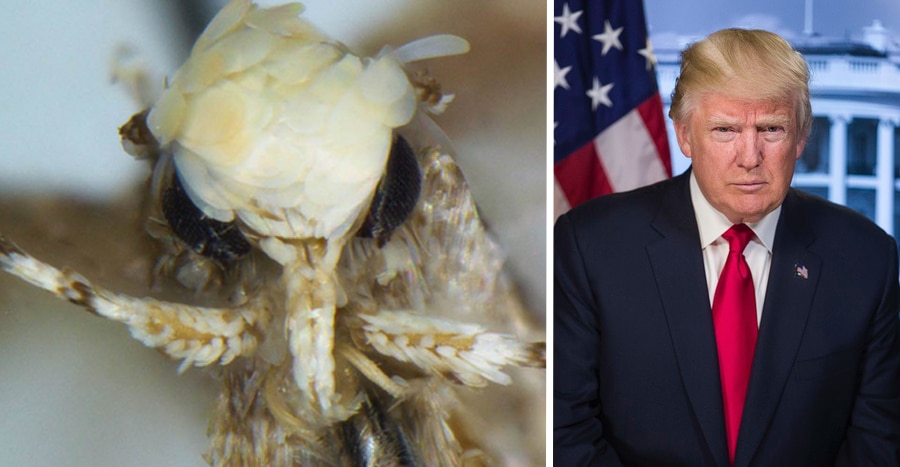 It's only fitting that the 45th President of the United States, Donald Trump, gain a species as well. The markings of the Neopalpa donaldtrumpi, a moth that was recently discovered in specimens at the Bohart Museum of Entomology, recalls the distinctive hairstyle of the billionaire. It's a type of twirler moth that is unfortunately losing habitat in southern California. 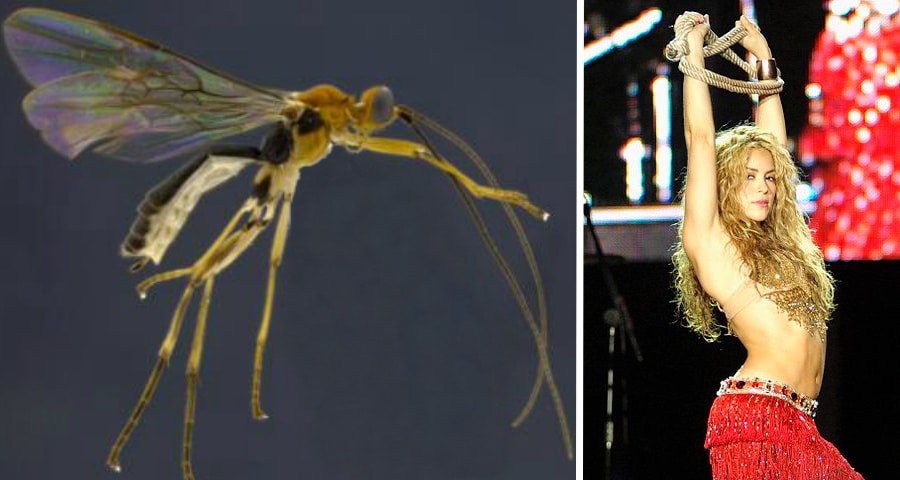 Discovered in the eastern Andes mountains of Ecuador, this tiny wasp—it measures 4 to 9 milimeters in length—was named after Colombian singer Shakira. Just what do a wasp and the best selling singer have in common? Their hips don't lie. That is, the parasitic wasp causes some wiggling moves of its own. Adult females inject their eggs into host caterpillars, which eventually kill the host as they develop. As the caterpillar dies, the larvae cause it to shake and wiggle in a way that reminded researchers of Shakira's signature dance moves.

The force is with this rare animal, a beetle named after Star Wars villain Darth Vader. Located in North Carolina, the beetle's shiny exoskeleton and large eye give it an uncanny resemblance to Luke's father. A take charge character, the Agathidium vaderi goes into defense mode by rolling itself into a sphere.

Found on the coral reefs of Indonesia and the Philippines, this tiny crustacean may appear to have little in common with its namesake Elton John. However, Dr. James Thomas from the Halmos College of Natural Sciences and Oceanography, who discovered the new species, had good reason for the name.

“I named the species in honor of Sir Elton John because I have listened to his music in my lab during my entire scientific career, so, when this unusual crustacean with a greatly enlarged appendage appeared under my microscope after a day of collecting, an image of the shoes Elton John wore as the Pinball Wizard came to mind.”

This cute little spider discovered in India set the internet on fire with its bizarre shape. Affectionately known as the Harry Potter sorting hat spider, the arachnid was discovered in India. Javed Ahmed and Rajashree Khalap, the scientists who discovered the new species were huge fans of Harry Potter, and immediately noticed the resemblance.

“We are very excited to have found this new spider whose shape is very similar to the magical sorting hat worn by the wizard (Gryffindor) in Harry Potter,” Ahmed shared with the Times of India. Even J.K. Rowling was enthusiastic, tweeting her approval.

It only makes sense that Playboy mogul Hugh Hefner would have his very own bunny. The mogul's rabbit, Sylvilagus palustris hefneri, is more commonly known as the Lower Keys marsh rabbit. Unfortunately, this cute bunny is losing habitat and is now critically endangered due to the urbanization of the Florida Keys. Predation by stray cats and vehicular deaths are some of the other reasons that this species may be extinct within 10 years. 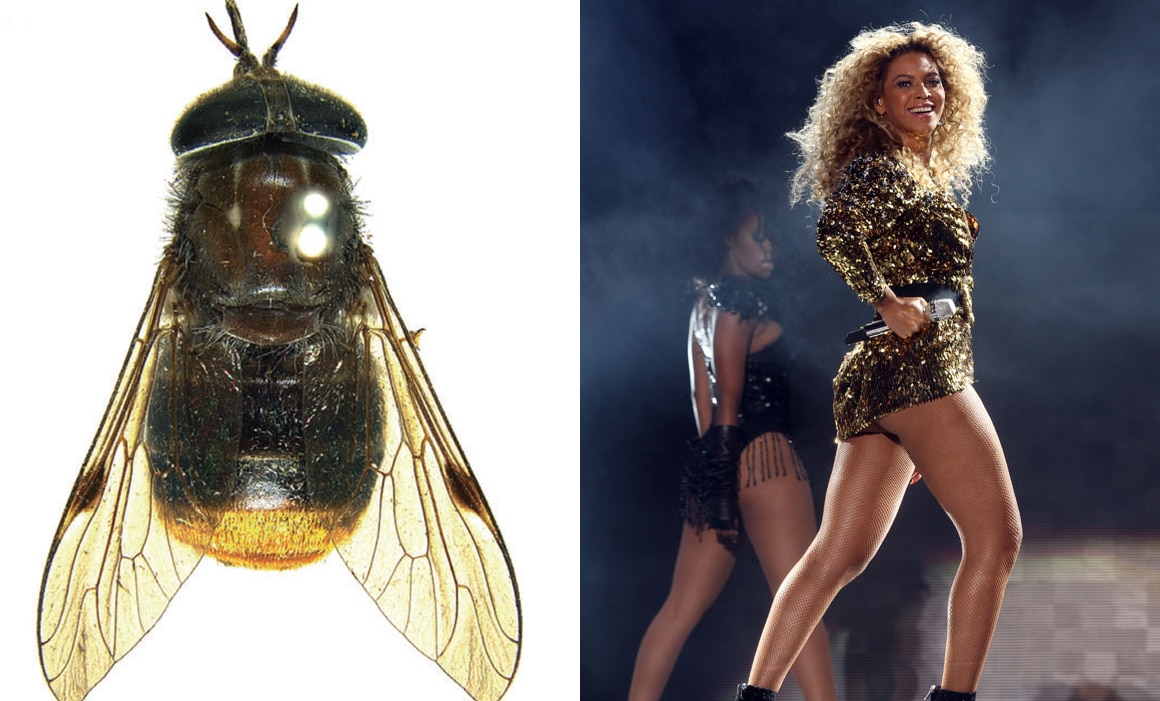 The Scaptia beyonceae is a horse fly found in north-east Queensland, Australia. Though this rare animal was discovered in 1981, it wasn't until 2011 that it was fully described. And it was a good thing scientists waited, as the singer after which it's named wouldn't have yet been famous. Due to its golden behind—a natural correlation between this rare fly and the Bootylicious singer—scientists named it after Beyonce .

The spiny spider crab found across South Florida and Caribbean was named in an homage to Spiderman actor Tobey Maguire. Feeding on both algae and carrion, this omnivore can reach a weight up to 4 lbs! And though its meat is said to be delicious, the unique animal used its spidey senses to avoid commercial harvesting. 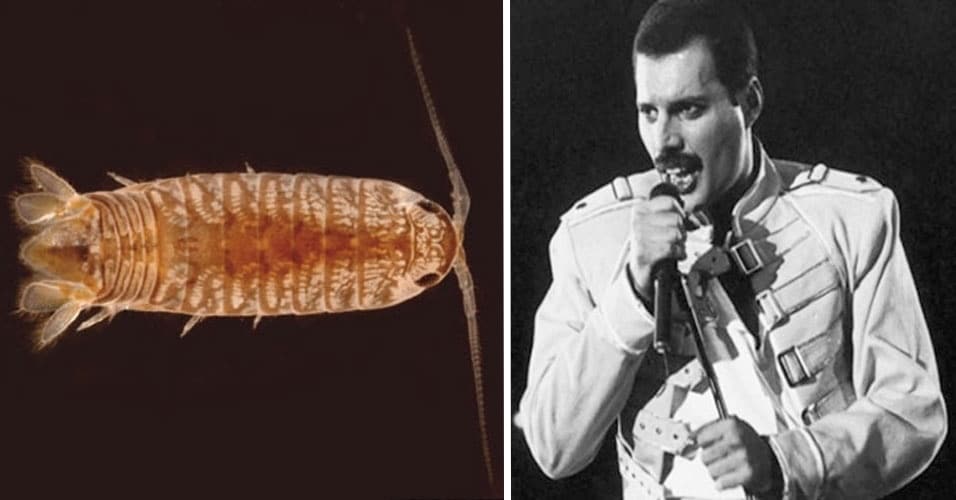 Born in Zanzibar, the late Freddy Mercury is arguably the nation's most famous singer. Therefore, it was only natural that this rare isopod take its name from the Queen frontman. As is typical of isopods, the creature has seven legs, which probably means it has some dance moves Mercury could appreciate.

This leaf-dwelling praying mantis from Madagascar has more in common with Supreme Court Justice Ruth Bader Ginsburg than you'd think. For one, the insect's neck plate bears a strong resemblance to the jabot Justice Ginsburg frequently sports. Secondly, both are also pioneers for women. The Ilomantis ginsburgae for being the first species of praying mantis to be characterized by its female genitalia, and Justice Ginsburg for being the second women appointed to the United States Supreme Court.

Of course Angelina Jolie has a namesake spider. In her younger years, the actress and humanitarian was known for her fascination with all things macabre. However, that isn't the reason scientist Jason Bond named this arachnid after Jolie in 2008. In reality, his is a tribute to the her work with the United Nations High Commission for Refugees.

What makes the arachnid special? This venomous spider is a nocturnal species that seizes their prey by jumping out of its burrows and injecting it with poison. A residential species, it's in no danger of extinction, meaning Angelina's spider is around to stay. 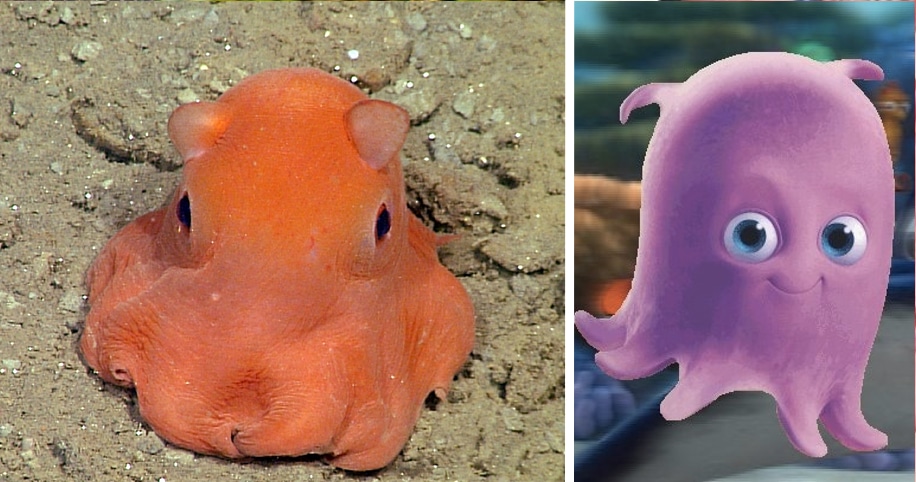 This little guy isn't named after a celebrity, but is one in its own right. The delightful Flapjack Octopus was actually the inspiration for Finding Nemo‘s Pearl. There was just one issue with how the animators depicted the species. These rare animals are actually deep sea creatures, so it never would have survived the shallow waters of Nemo!