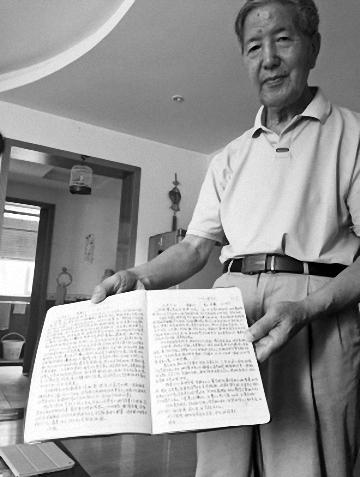 Regularly composing hand-written letters has been scientifically shown to provide a variety of emotional health benefits, from alleviating depressive symptoms to improving self-reported levels of happiness and life satisfaction. In Ningbo, China, an elderly man named Chen Xiukang serves as further evidence of these findings: for four years, he's been writing daily letters to his late wife, connecting with her in ways he never got the chance to do in person.

Chen and his beloved married back in 1967 after only a few in-person meetings. The couple began to truly enjoy their time together after their children were grown, he says, but there were still certain personal stories and intimate details they didn't share. When she passed away in 2012, Chen realized he still had so much left to tell her, so he began writing daily letters to recount the major moments in his life. Starting with 1,000-character notes that slowly expanded to 2,000 characters long, he's now progressively composed over 1.5 million Chinese characters.

Chen explained to Ningbo Evening News, “Although the two of us were very emotional, we would keep our distance from each other…Now I think back to that time and realize I was so foolish.” This ritual helps him feel like his wife is still with him, providing consolation as well as a sweet way to honor her memory.

Image above via Shanghaiist.