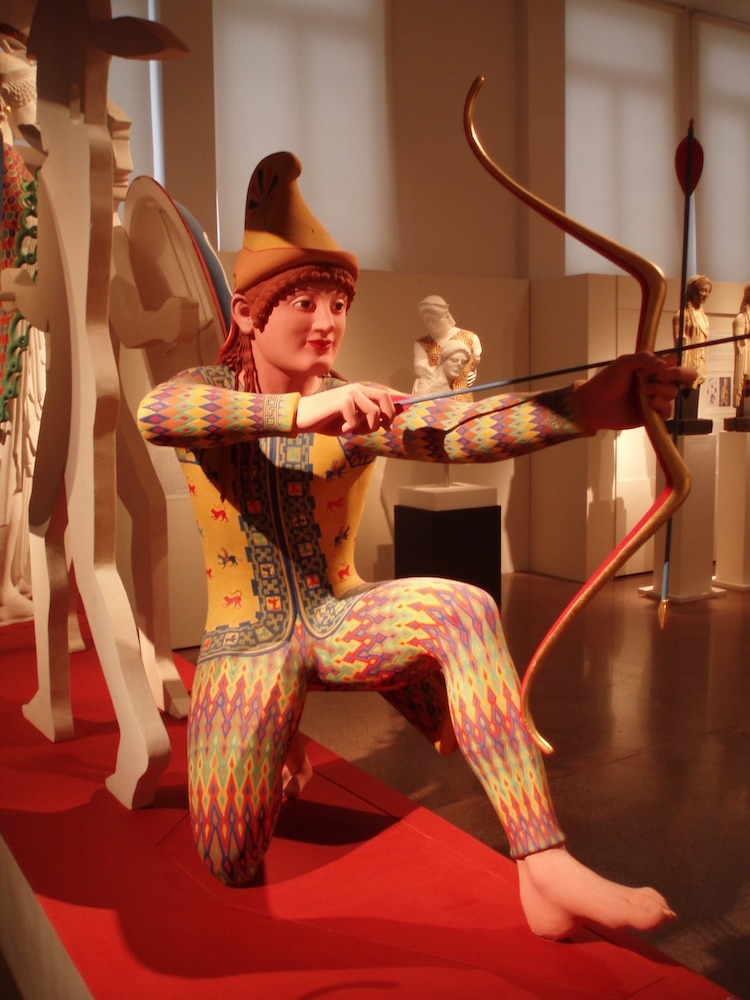 Color restoration of a Trojan archer from the Temple of Aphaia, Aegina. (Photo: Marsyas via Wikimedia Commons [CC-BY-SA-2.5])

Marble sculpture is a cornerstone of art history. The ancient Greeks left a legacy of transformative sculptural works that reached for unprecedented naturalism in Hellenistic gems such as Venus de Milo and Nike of Samothrace. This was succeeded by the ancient Romans, who copied their major works and created portrait busts and equestrian statues of major historical figures.

At the time of their completion, however, these ancient masterpieces looked remarkably different. Instead of the uniform ivory surfaces we’re familiar with today, these sculptures were in fact painted over in vibrant colors. This includes their skin, hair, clothes, eyes, and even finer details like intricate prints and eyelashes. Both the Greeks and the Romans embellished their pristine marble sculptures in paint, believing that the work of art was incomplete until it received its chromatic embellishment. 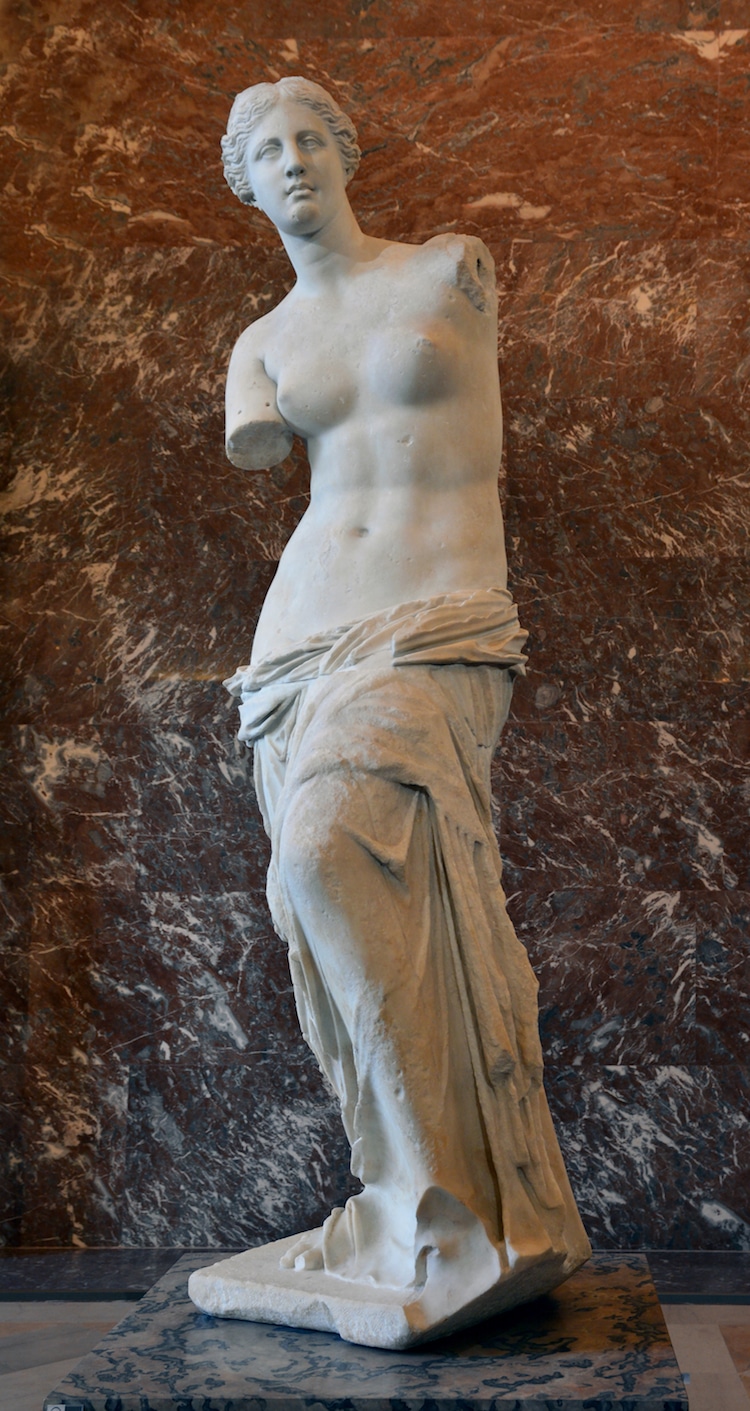 Despite these facts, the misconception of their “unblemished” appearance lives on—due in large part to their rediscovery 600 years ago, and the impact it had afterward. When Italians found these classical treasures buried underground in the 14th century, the fragile pigments had long since fallen away. However, since these sculptures appeared otherwise intact and well-preserved, it was assumed they were meant to be white marble.

This revelation of ancient aesthetics—which were so dramatically different from the lingering Gothic style of the Middle Ages—was one of the triggers for the Italian Renaissance. Suddenly, colorless statues were upheld to be the standard of classical art which all visionary artists should be trying to achieve. Thus, sculptors like Michelangelo were challenged with transforming a block of marble into a human ideal without “sullying” the surface with unnecessary beautification, such as paint. 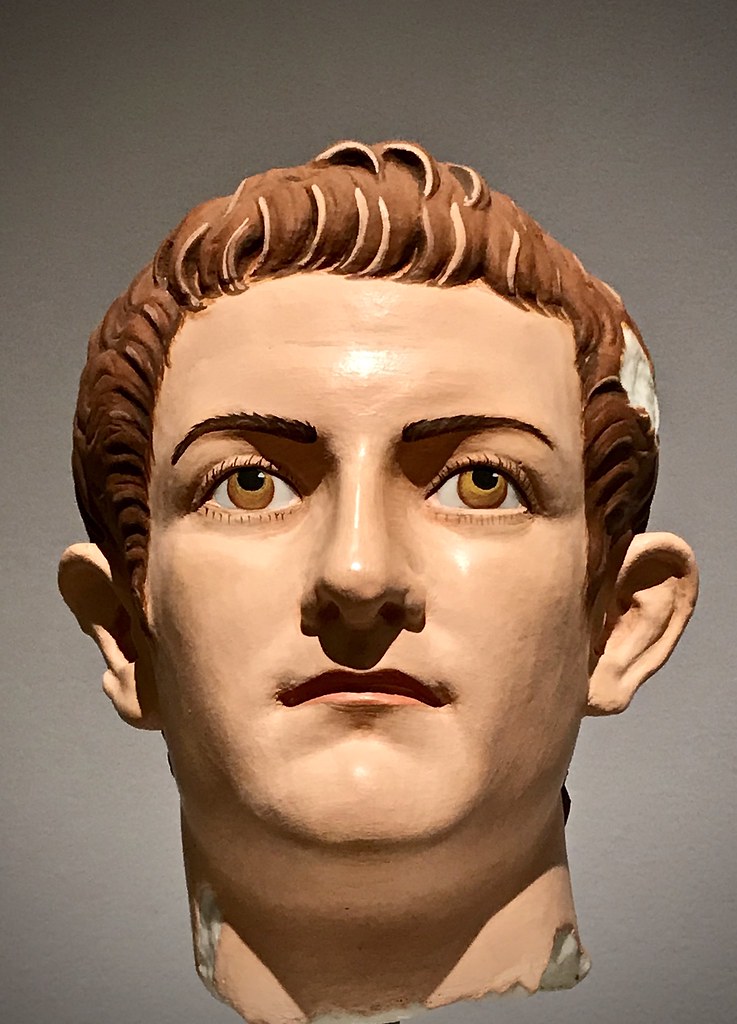 Even though ancient artifacts with traces of paint were discovered during the subsequent centuries, the glorified aesthetic of white marble had already been widely propagated as the correct one. So much so, that painted sculptures were often ridiculed as being a lower art form, especially as it resembled the style of art during the Middle Ages—a period which was seen as the antithesis of classical and neoclassical ideals.

Now, art historians and conservationists know for certain that ancient Greek and Roman sculptures were meant to be seen in color, and, with the aid of modern technology, they are able to reproduce these relics as polychromatic sculptures. It is their hope that by circulating these painted copies in museums and exhibitions, the impermeable idea of white marble sculpture will eventually become equal to its painted counterparts.

Watch this video by Vox to get a brief history of the colorful ancient art world.